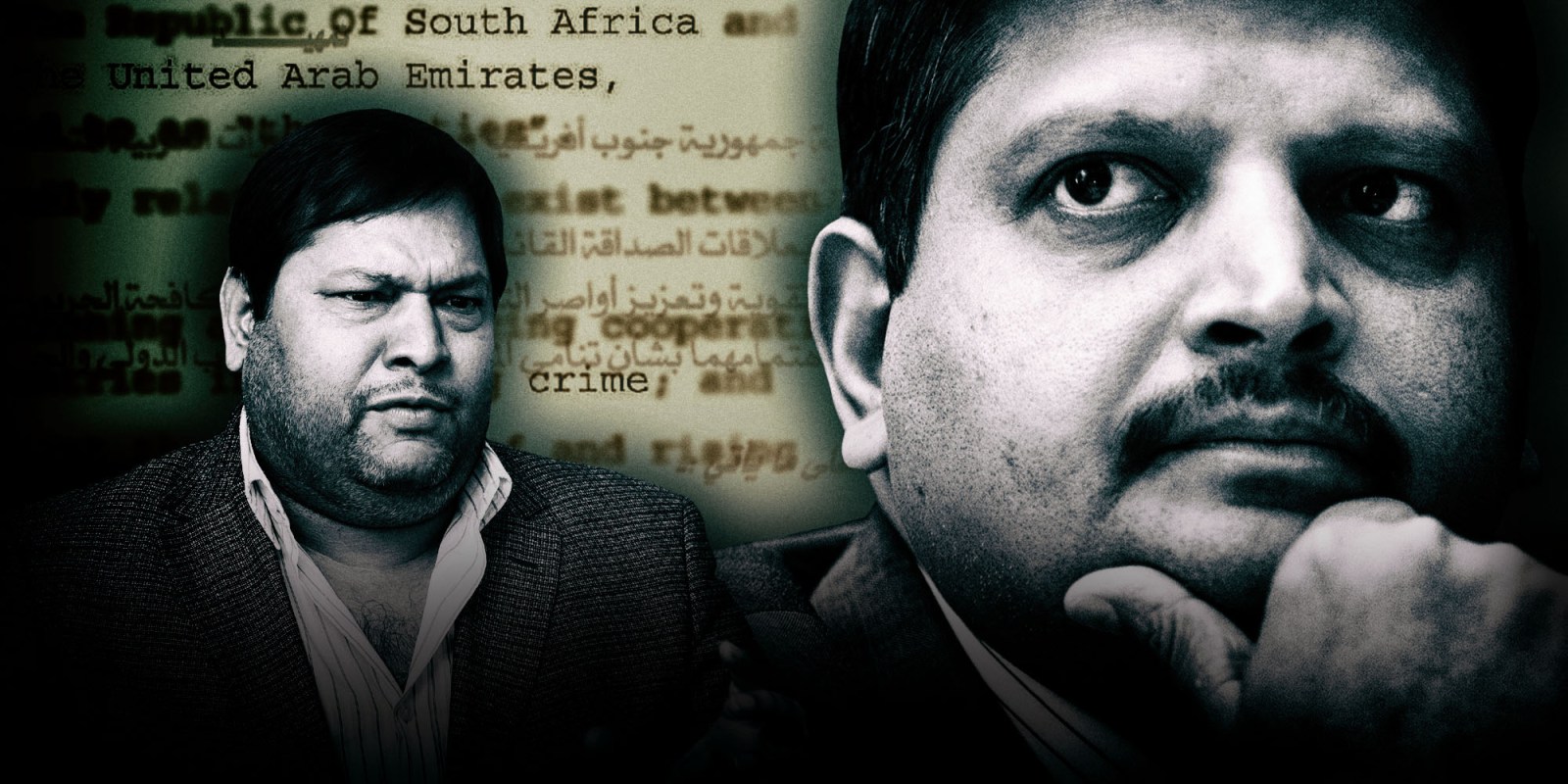 Next week marks five years since the #GuptaLeaks publicly emerged to expose the workings of the Guptas’ alleged criminal enterprise. Amid scores of ongoing investigations at state-owned companies, others by the police, the National Prosecuting Authority, the Special Investigating Unit and the R1-billion Zondo Commission – at which they also featured centrally – there is still no sign that the Guptas will see the inside of a South African courtroom anytime soon.

Unbanked and crippled by Magnitsky sanctions, the Guptas are no ordinary perps. Having publicly refused to travel to South Africa since 2018, brothers Ajay, Atul and Rajesh Gupta have long been labelled fugitives from justice.

Two of them, now under Interpol Red Notices, officially carry this tag owing to their alleged hand in a fraud and money laundering case in the Free State.

Yet, from the global shadows of Perpville, the Guptas continue to litigate in the country’s courts, hiding behind proxies and concealing their whereabouts as they depose to affidavits via Microsoft Teams or Zoom.

Dubai and Tashkent are often stated as their new base, but public sightings have been so rare, even nonexistent, that the Guptas may well be in Saxonwold.

By its very nature, South Africa’s quest to catch them is high-profile, as the alleged crimes, the money trail and their hideouts span foreign jurisdictions including Hong Kong, New York, the UAE, India and Uzbekistan.

They are implicated in hundreds of millions of rands in dirty deals at Eskom and Transnet, among others, while giants like McKinsey & Co, KPMG and others each try to claw their own way out of the mess left of what was once a lucrative association for each of them.

Unfortunately, the Guptas’ successful cat-and-mouse game is showing South Africa up spectacularly. And nothing says chaos quite like this:

“It’s pivotal that the location of fugitives is determined before a particular country is approached with request to surrender persons sought.” – The National Prosecuting Authority (NPA), May 2022.

This was the NPA’s response to a question about whether any extradition application has been sent off as yet.

The South African Police Service (SAPS) stated its position as fact, in its response to questions – not once, but six times.

The written response attributed to Hawks head Lieutenant-General Godfrey Lebeya also noted that, because their whereabouts are “known”, requests for mutual legal assistance and extradition have been submitted to the Department of Justice.

When DM168 pressed the SAPS for the dates of these remarkable developments, things became, presumably, operational and therefore could not be answered. As such, it is unclear whether that intelligence about the Guptas’ whereabouts or the action taken is weeks, months or even years old.

Regardless, this striking difference in answers between these two entities at the helm of efforts to bring the Guptas to book is deeply worrying and fuels alarming concerns about whether the Guptas will ever face the music.

Whose job is it anyway?

Locating the Guptas is a mission of national importance but the current system seems uncoordinated and haphazard, if not reactionary.

Responses to questions sent to the Department of Justice, the NPA, the offices of the Ministers of Police, International Relations and State Security suggest or confirm that:

There is no coherent plan or central command for the task and everyone believes it is the responsibility of law enforcement despite its limited reach.

There is no indication that the various government departments are acting as a collective or working off one definitive blueprint or even that they are actively lobbying counterparts and contacts abroad.

Perhaps most worryingly, there is no plan to launch simultaneous extradition applications to all three countries – India, the UAE and Uzbekistan (locations identified based on the fact that there are reasonable grounds that this is where they may be).

Bluntly put, South Africa does not know if it is coming or going in the hunt for the Guptas.

But although the NPA rightfully is responsible for executing international requests –extradition applications or requests for mutual legal assistance – it does seem like everyone else is a mere bystander, stepping in just occasionally when called upon for a favour of sorts.

The overwhelming response from the Ministries of International Relations, State Security and Police to questions about what they’re doing or what their role is in helping South Africa to locate the Guptas, is essentially that it is not their baby – all referring questions to the Department of Justice and the NPA.

Considering the limits of local law enforcement and the national interest dynamic to this case, DM168 asked the State Security Agency (SSA) what it has done to help to find the Guptas. This was their response: “Please refer the enquiry to the law enforcement agencies regarding the investigation, possible extradition and prosecutions in this regard. The [SSA] does not have a law enforcement mandate.”

When pushed that the issue is whether the SSA – considering it has both a domestic and a foreign branch – has ever been asked to help to find the Guptas, the response was standard, with SSA spokesperson Mava Scott saying simply that “the law does not permit” operational issues to be discussed with third parties.

With the SSA now located in the presidency under Minister Mondli Gungubele, DM168 went a step further to ask what the new minister has done to familiarise himself with efforts undertaken by the SSA to find the Guptas.

His office too referred questions to law enforcement and the NPA.

DM168 – emphasising the costs associated with the alleged Gupta crimes, the ongoing costs of investigating them, as well as the limited reach of law enforcement – asked the minister’s office to reconsider its response.

We also asked whether the SSA considered itself a mere bystander in this mission.

South Africa therefore remains in the dark about whether either the domestic or foreign branch of the SSA, with its large number of agents or assets around the world, has lifted even one finger to help local law enforcement.

Similarly, information sought from Minister Naledi Pandor’s office went unanswered – save for one question about which South African embassy is responsible for Uzbekistan. (The younger-generation Guptas are openly doing business in the capital city of Tashkent.)

DM168 asked the Department of International Relations and Cooperation a set of eight questions, including when last an official South African delegation had travelled to Uzbekistan, which South African embassy is responsible for that country and whether that head of mission has been told to establish whether the Guptas are indeed in Uzbekistan, as media reports have suggested.

Again, we were told that the Department of Justice is responsible for Gupta matters.

South African diplomats could productively wave Interpol Red Notices or arrest warrants at the governments of the UAE, India or Uzbekistan to try to extract official information about when last the Guptas had entered or exited their borders.

Instead, a mission of national interest continues to be the apparent domain of law enforcement, however significant the limits of its reach in this case.

The Department of Justice did not respond to questions, whereas the NPA, asked who exactly is responsible for finding the Guptas, said: “It is the function of the police to locate the whereabouts of accused persons and to ensure that they appear in court.”

The NPA will initiate extradition when the fugitive is in a foreign state. But it cannot move until the suspects are located and, for that, its own success depends on Interpol delivering.

It also confirmed that the Investigating Directorate, the driving force behind many of the Gupta-linked cases, has asked State Security to assist with the hunt for them, but provided no details.

In addition, the National Director of Public Prosecutions, Shamila Batohi, who is also the rotational chairperson of the Anti-Corruption Task Team, has meetings scheduled with the directors-general of both State Security and International Relations in the coming weeks.

The NPA also maintains that it cannot initiate extradition processes until the Guptas are located. (There has been much criticism of this decision.)

DM168 asked one of the Gupta lawyers, Stiaan Krause, whether he has had any request for details of the Gupta brothers’ whereabouts and, if so, whether he would be prevented from disclosing such.

We also asked what it would take for his clients to travel to South Africa to answer to allegations of fraud, corruption or money laundering.

Would such a trip be conditional? What would those conditions be?

Unsurprisingly, there was no response. DM168