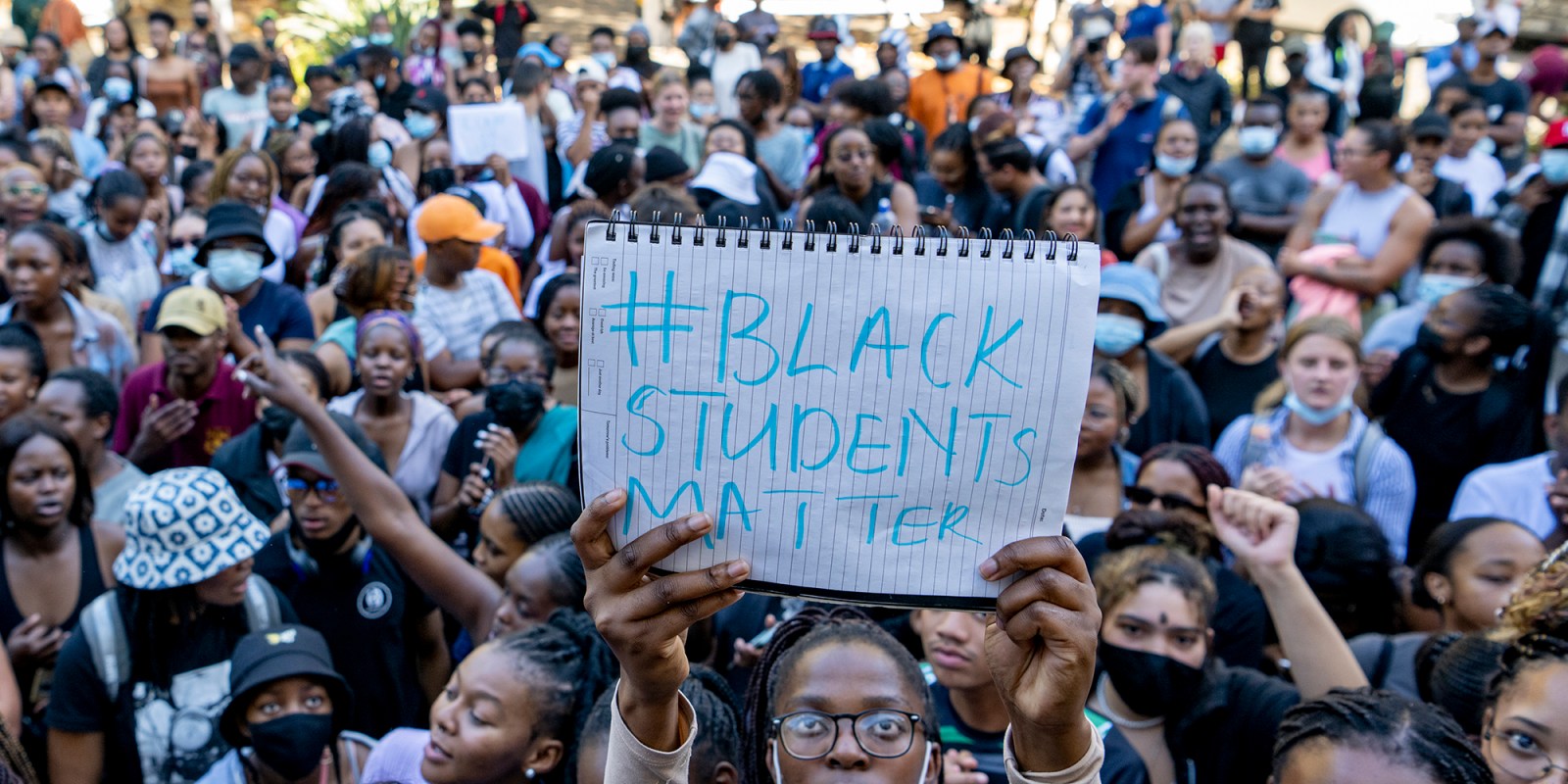 Students protest outside the Admin B building of Stellenbosch University after a video of white student Theuns du Toit urinating in the room and on the study materials of black student Babalo Ndwayana went viral. (Photo: Gallo Images / Die Burger / Jaco Marais)

‘There is no place for such behaviour or people at our universities,’ the ministry said in a statement.

The higher education, science and technology minister, Blade Nzimande, on Wednesday condemned a racist incident that occurred at Stellenbosch University’s Huis Marais men’s residence on Sunday, when a white student, Theuns du Toit, urinated in the room, and on the study materials, of a black student, Babalo Ndwayana.

“There is no place for such behaviour or people at our universities,” the ministry said in a statement.

Nzimande said: “The incident, like similar past incidents, points to a fundamental question about the continued persistence of oppressive social structures in parts of South African society that fosters a disposition in which a young person endows himself [with] the right to behave in the most egregious and abominable racist manner against a fellow human being.

“If it is the case that no person is born racist, as former state president Nelson Mandela correctly argued, where does such behaviour stem from?”

Minister @DrBladeNzimande condemns in the strongest terms what clearly appears to be a blatantly racist act, where a white student committed an egregious act against the dignity and person of a fellow black student at the @StellenboschUni’s Huis Marias student residence. pic.twitter.com/ii86h7TZ9v

Ndwayana (20) was asleep in his room at Huis Marais men’s residence on Sunday morning, 15 May, when Du Toit entered it at about 4am and urinated on his books and a laptop on his desk.

A video of Du Toit urinating on the first-year student’s belongings went viral online. In the video clip, Ndwayana can be heard asking Du Toit why he is “peeing …in [his] room”. Du Toit responds with “Huh”, and Ndwayana repeats the question. Still urinating, Du Toit mumbles: “I’m waiting for someone.”

When Ndwayana inquires further, Du Toit responds with “boy”. Du Toit then asks Ndwayana where his roommate is.

When the recording stopped, according to Ndwayana, Du Toit told him that “It’s a white boy thing”, which he interpreted to mean “this is what they [white boys] do to black boys”, News24 reported.

Huis Marais residence management was made aware of the incident on Sunday and reported it to the relevant university structures for investigation.

The incident drew immediate outrage from students and student representative bodies, activists, human rights bodies, civil society organisations and student unions that have since decried the incident and called for the perpetrator’s removal from the institution.

An online petition was created and began circulating on Monday, demanding Du Toit’s expulsion for the “racially motivated attack”. As of 7.15pm on Wednesday, the petition had 96,103 signatures.

The South African Students Congress (Sasco) on Monday condemned “with the highest contempt, the racist actions” of Du Toit and called for his expulsion from the academic institution, saying the response from Stellenbosch University (SU) was not enough.

“[Du Toit] violated [Ndwayana’s] dignity, thus violating his constitutional right as a citizen of South Africa but also his rights as a Stellenbosch University student.

“Anything short of expulsion and potentially criminal charges would be regarded as or seen as injustice. This racist criminal act deserves the highest punishment, if we are to have confidence that the university truly respects and protects the rights of students, particularly the black marginalised students. We demand that the university and all relevant authorities ensure that justice prevails,” read Sasco’s statement.

The Council on Higher Education’s CEO, Dr Whitfield Green, also condemned the “horrific racially motivated attack”, saying: “The intention was clearly to completely demean and dehumanise a black student and to question his legitimate right to study at this public university. By its very nature, it is a clear demonstration of the racism that is still very prevalent in our society.

“Both the individual incident and the individual perpetrator are condemned, but also the culture that, even in a democratic South Africa, still enables the beliefs and values that underpin these behaviours and allow them to continue and even to thrive. Sadly, racist events such as these are not isolated cases.”

Calling on SU to take the strongest possible action against Du Toit, Green added that the incident highlighted the need for “strong introspection at the university”, and questioned to what extent transformation at the university was under way or whether this was a sign “of an institution and institutional culture that remains largely untransformed”.

On Monday, Stellenbosch University announced Du Toit’s suspension from the institution, adding that its Equality Unit would be investigating the incident. Du Toit was also removed from the men’s residence.

“The university strongly condemns the destructive, hurtful and racist incident that was captured on a cellphone video in the Huis Marais residence… A further swift but detailed investigation will determine the final outcomes,” read SU’s initial statement. The university added that “expulsion and/or criminal charges are not excluded from the possible available options, based on the investigation’s findings”.

In responses to queries from Daily Maverick on Wednesday, SU spokesperson Martin Viljoen said the Equality Unit had expedited its investigation “to establish what happened and what evidence is available”.

“It has finalised its report into the matter and the report, with recommendations, has been referred to the Student Discipline Office. All cases are confidential, and the confidentiality of the complainant and respondent should be respected. A decision on whether the findings will be made public will be communicated in due course,” said Viljoen.

On Tuesday, the SU rector and vice-chancellor, Wim de Villiers, told eNCA that the matter was receiving his full attention and “a final outcome is expected in the next few days”.

Viljoen added that a Confirmation of Temporary Suspension Hearing for Du Toit would take place on Thursday before a Central Disciplinary Committee (CDC) panel.

Viljoen said: “The [Disciplinary Code for Students] requires this hearing to take place within five working days after receipt of the temporary suspension letter by the implicated student. The purpose of this hearing is for the CDC to decide whether they confirm, amend or set aside the rector’s decision to suspend the student pending the finalisation of the disciplinary proceedings.”

The evidence informs the formulation of the charge sheet, and when the disciplinary process concludes and the CDC decides on sanctions, the effect of the incident on the community is considered, Viljoen explained.

“The petition underlines the seriousness of this matter and it highlights that an incident as such cannot be… treated through a disciplinary process alone, as the effects of the incident have a wider effect. As such, SU takes the petition into account and it informs and motivates the transformation efforts,” he added.

In addition to SU’s internal investigation, the South African Human Rights Commission confirmed to Newzroom Afrika that it would investigate the matter after receiving two complaints about it on Tuesday.

Ndwayana has reportedly expressed feeling traumatised by the incident, and that his “dignity was taken away”. Ndwayana’s father, Mkuseli Kaduka, is pushing for Du Toit’s expulsion.

Western Cape SAPS spokesperson Captain Frederick van Wyk confirmed that Ndwayana, had “opened cases of housebreaking, unknown malicious damage to property and crimen injuria” at about 2.30pm on Tuesday with the Stellenbosch SAPS.

The investigation is ongoing, with “no arrest as yet”, said Van Wyk.

Neeshan Balton, the executive director of the Ahmed Kathrada Foundation, which seeks to promote non-racialism and the principles enshrined in the Freedom Charter and the Constitution, commended Ndwayana’s bravery in recording the incident.

“I thought what he did was a brave thing; to have recorded this, instead of trying to confront this aggressive white student. Because through that recording, I think we’ve come to understand the action, but perhaps also the intention behind that action itself.”

That type of record-keeping, Balton said, “is important for us to understand that incident, but also perhaps the wider context of the university itself”.

In a statement on Tuesday, the Ahmed Kathrada Foundation said that beyond “strong and decisive” action by the university against Du Toit, “there is a need to subject him to programmes that will aid in his possible unlearning of his racial hatred”.

Please see the official statement by the Ahmed Kathrada Foundation following the recent incident at the #StellenboschUniversity and the racially motivated killings in Buffalo, USA. pic.twitter.com/jNJg7Vs9Tp

Balton added that the incident suggested resistance to transformation within the institutional culture at the university, “as it goes through its own process of transition from being a kind of apartheid structure, to one that perhaps is evolving”.

He said: “The changing institutional culture is one that needs greater elaboration and support”. In the context of the university, “The kind of racial microaggressions that particularly black students will experience needs to be better understood.” DM

Mkuseli Kaduka was contacted for comment, but a response had not been provided at the time of writing.