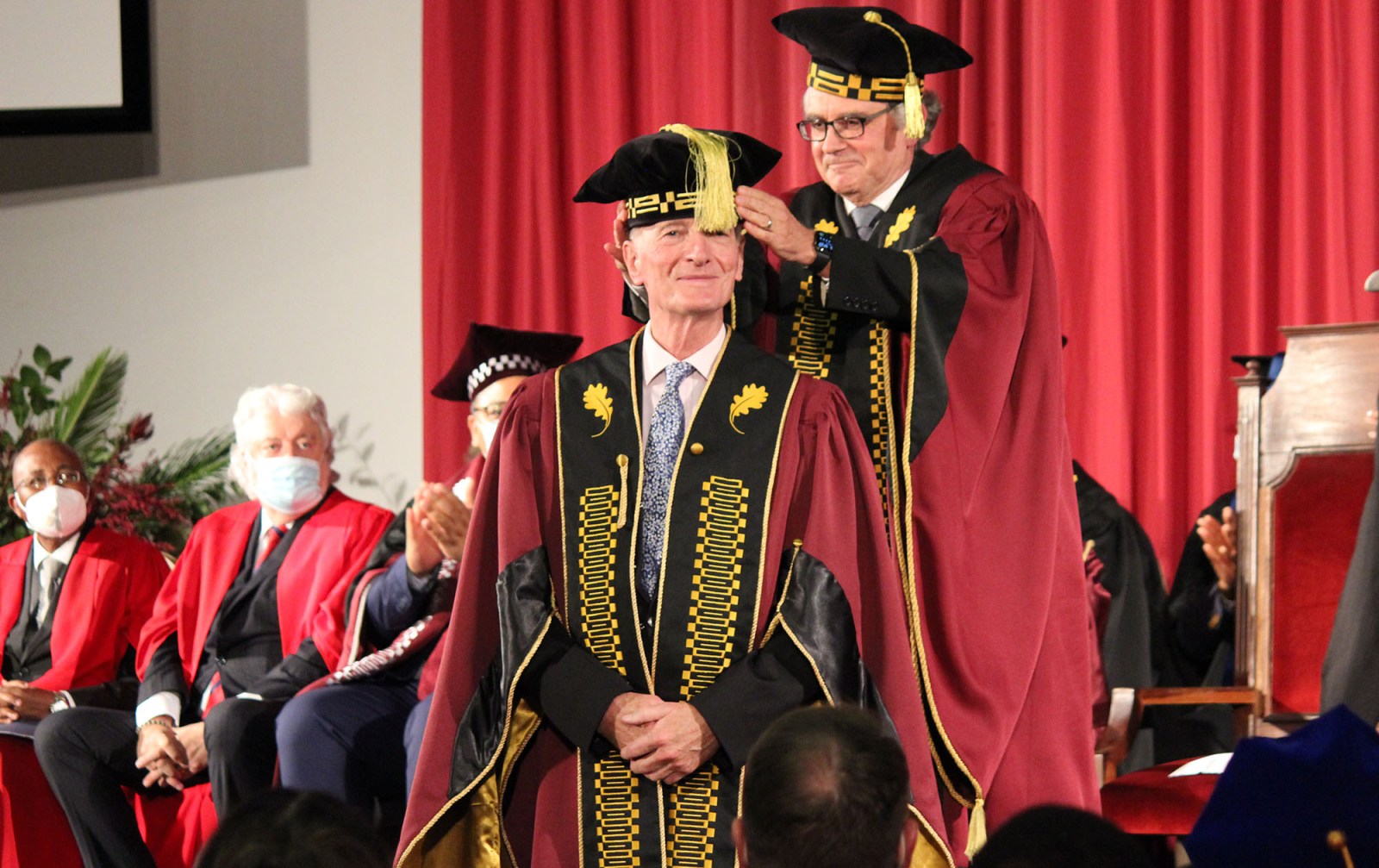 Justice Edwin Cameron was officially inaugurated as chancellor of Stellenbosch University on Wednesday, 18 May. While he has been in office for more than two years, the ceremony was delayed due to the Covid-19 pandemic. Now, it takes place against a backdrop of campus unrest triggered by an alleged racist incident at the university earlier this week.

The dignity and self-worth inherent in South African people motivates them to care about the country’s universities and how they function, says Justice Edwin Cameron, chancellor of Stellenbosch University (SU).

“We as a country deserve outstanding teaching and dedicated learning, and world-improving research and conceptual breakthroughs in knowledge and knowledge systems, and in human and artificial intelligence,” said Cameron. “And we deserve a university… that is free of disrespect and hatred and degradation.”

Cameron was speaking at a ceremony marking his formal installation as chancellor of Stellenbosch University on Wednesday, 18 May. Though he took office in January 2020, the Covid-19 pandemic delayed his official inauguration.

“Justice Cameron has been exemplary in his role as Chancellor during this time,” said Professor Wim de Villiers, rector and vice-chancellor of SU, during the ceremony. He said that long before Cameron joined SU as chancellor, he proved himself to be an extraordinary South African leader, as well as a “relentless proponent of the protection and promotion of human dignity for all”.

Cameron is widely recognised for his commitment to human rights and social justice, having begun his career as a human rights lawyer during the apartheid years. He was appointed to the Supreme Court of Appeal in 2001 and to the Constitutional Court in 2009, according to the information booklet at his inauguration.

“A significant part of [Cameron’s] legal career was dedicated to using the law, apartheid’s oppressive instrument, to work against apartheid,” said De Villiers.

In his approach to law, Cameron also became an important activist for people living with HIV and Aids, promoting social justice and fighting for the rights of members of the LGBTQI+ community, said De Villiers.

“During the past two years, the Stellenbosch University community has gotten to know Justice Cameron as an inspiring figure, whose imposing stature — physically and intellectually — commands respect. Not only because of his achievements, but because of his demeanour,” he continued.

Cameron shared that his time as chancellor of SU has brought him great joy, with a large part of this joy derived from his interactions with a diversity of students on campus.

“The people on campus — black, white, gay, straight, from urban and rural places across the country and the continent — Stellenbosch students with a drive and tenacity and purposefulness that give one a burst of hope for our country,” he elaborated.

Speaking to Maverick Citizen before the inauguration ceremony, Cameron explained that he saw the delays to his official installation as chancellor as symbolic, revealing the vulnerability of the institution. He emphasised that SU should not become complacent or self-congratulatory.

“For me, both Covid and the events of the last few days on campus bring a deep sense of reflection about where we went wrong, but also more importantly, about what we can do better, because today is about the future,” said Cameron.

Universities are exciting, he continued, because of the young people that they nurture. There is a need to create an atmosphere of safety, inclusivity and affirmation, where students can acquire and replicate knowledge.

“That, for me, is the key to this job as well. It’s a nominal job, it’s a ceremonial job. But even in that attenuated way, it has importance in all those respects,” he said.

The SU Student Representative Council was not present at the inauguration ceremony. Cameron said they had informed both him and De Villiers that they would not attend the event at a meeting on Wednesday afternoon.

“They said, ‘We cannot celebrate this afternoon when there’s so much pain on our campus’,” said Cameron.

This comes after a recent incident in the Huis Marais residence at SU, where a white student entered the room of a black student and urinated on his desk and possessions. A video of the incident was widely shared on social media, according to a News24 report from 17 May.

The perpetrator, Theuns du Toit, has been suspended from the university and police have confirmed that they are investigating the incident.

Cameron said he respected the SRC’s decision to be absent from the ceremony as a “matter of deep principle”.

In his address, De Villiers gave his assurance that the university is taking appropriate action, within the stipulations of its disciplinary code, to deal with the matter.

“Part of Justice Cameron’s life’s work has been ensuring that the dignity of all people must remain intact, and we’d do well to use his life’s work as an example for how we want Stellenbosch University to look,” he said.

The incident at Huis Marais has underscored the need to create an inclusive, affirming campus that is not just tolerant of diversity, but richly proud of it, Cameron told Maverick Citizen.

“For me, the most significant moments of the last two years as chancellor [have] been graduation ceremonies where each person coming across the podium represents a past, but also represents an investment in the future — and that person’s hopes and dreams are what Stellenbosch should be supporting,” he said. DM/MC