STATE OF THE JUDICIARY 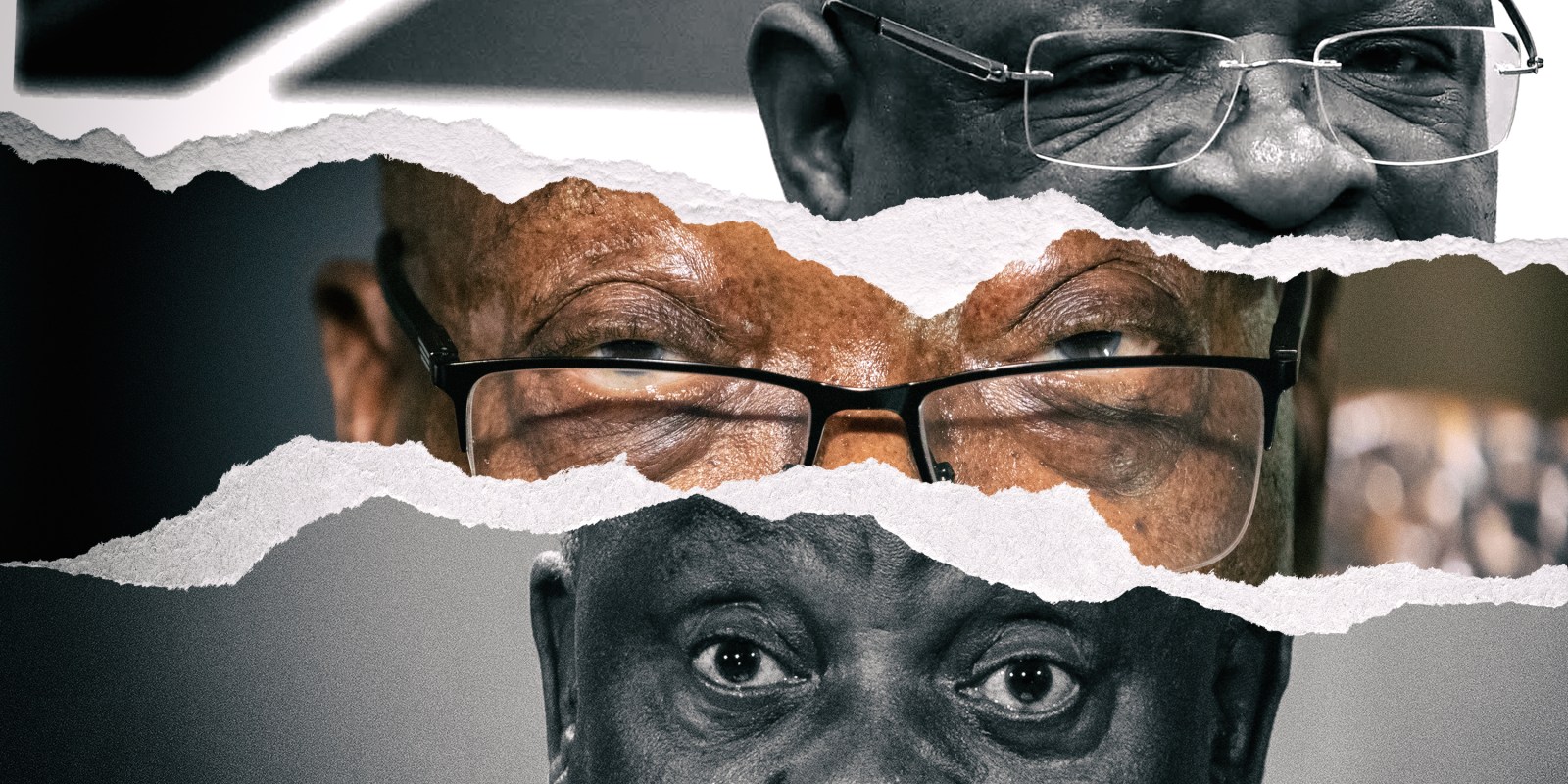 South African courts have been described as ‘battlegrounds for contesting political forces’ and the period of a study into the judiciary was no exception. ‘Perhaps the most striking example was the string of cases relating to former President Jacob Zuma’s battle with the Commission of Inquiry into Allegations of State Capture’, noted the authors of the just-published report.

Facing unprecedented political pressure, South Africa’s Constitutional Court held the line and had been undeterred by former president Jacob Zuma’s three-pronged onslaught in 2021, a report on the judiciary has found.

“This is indicative of a fearless and independent judiciary,” noted the just-published scoping study and report, “State of the Judiciary in Malawi, Namibia and South Africa”.

The study, funded by the Norwegian Embassy, was conducted by the Democratic Governance Rights Unit (DGRU), an applied research unit based at the Department of Public Law at the University of Cape Town.

The report notes that since the start of the country’s constitutional era and particularly the past 10 years, “judges in South Africa have been required to adjudicate disputes that touch on issues central to the political life of the nation”.

In so doing, the judiciary had had to decide on controversies that, “in many other jurisdictions, would be expected to be resolved in the political domain”.

Figures from the judiciary’s annual report for the 2020-2021 financial year indicated that the Constitutional Court “is struggling under its increased caseload, with a finalisation rate of only 61% compared to the Supreme Court of Appeal’s finalisation rate of 81%,” noted the study.

The finalisation rates in the high court appear “better than anecdotal perceptions of court efficiency would suggest”, while labour courts also appeared to be “struggling, with a finalisation rate of only just over 50%”, research revealed.

During Zuma’s presidency “the courts were often described as the last line of defence for democracy”, the report noted, but regardless of this, the judiciary in South Africa had “lost a considerable amount of public support (23 percentage points between 2011 and 2012)”.

South African courts had been described as “battlegrounds for contesting political forces” and the period of the DGRU report, noted the authors, was no exception.

“Perhaps the most striking example was the string of cases relating to former President Jacob Zuma’s battle with the Commission of Inquiry into Allegations of State Capture”, it noted.

In the first of these cases, the Constitutional Court had been faced with an application for an order compelling Zuma to appear before the Zondo commission.

“This followed a lengthy history of Zuma declining to participate in the Commission’s proceedings. The court held unanimously that he should be so compelled and criticised Zuma’s conduct in defying the process as ‘antithetical’ to our constitutional order”, said the authors.

In that instance, the court pronounced that “we must remember that this is a Republic of laws where the Constitution is supreme”.

“In our system, no one is above the law. Even those who had the privilege of making laws are bound to respect and comply with those laws. For as long as they are in force, laws must be obeyed,” said the Constitutional Court.

Zuma was directed to adhere to all summonses and directives lawfully issued by the Zondo commission.

The DGRU study noted that it was clear that the court had been aware of the “extreme political pressure” it was under by emphasising that “it was in the public interest to send an unequivocal message that the court’s orders could not simply be ignored with impunity”.

In the second of the legal challenges, the commission again approached the Constitutional Court seeking an order declaring Zuma guilty of contempt. In the end, Zuma was sentenced to 15 months in prison, but brought an application for the recission of the order granted in the second judgment.

These cases were decided, the report highlights, in the volatile context and the lacuna between the second and third judgments when a violent insurrection was set in motion.

An expert panel later appointed by President Cyril Ramaphosa found that the provinces of KwaZulu-Natal and Gauteng experienced a kind of violence in July 2021 “never before seen in democratic South Africa”.

The findings of the DGRU report are based on data from Afrobarometer, a non-partisan, pan-African research institution that conducts public attitude surveys on democracy, governance, the economy and society in more than 30 countries and repeated in regular cycles.

Using eight Afrobarometer surveys, DGRU researchers tracked trends of public trust in courts in Malawi, Namibia and South Africa and compared these with findings from other countries on the continent.

With regard to trust in the courts out of 34 countries, Tanzania rated first with 90%, followed by Malawi at 68%. South Africa ranks 23rd with a 43% trust factor. 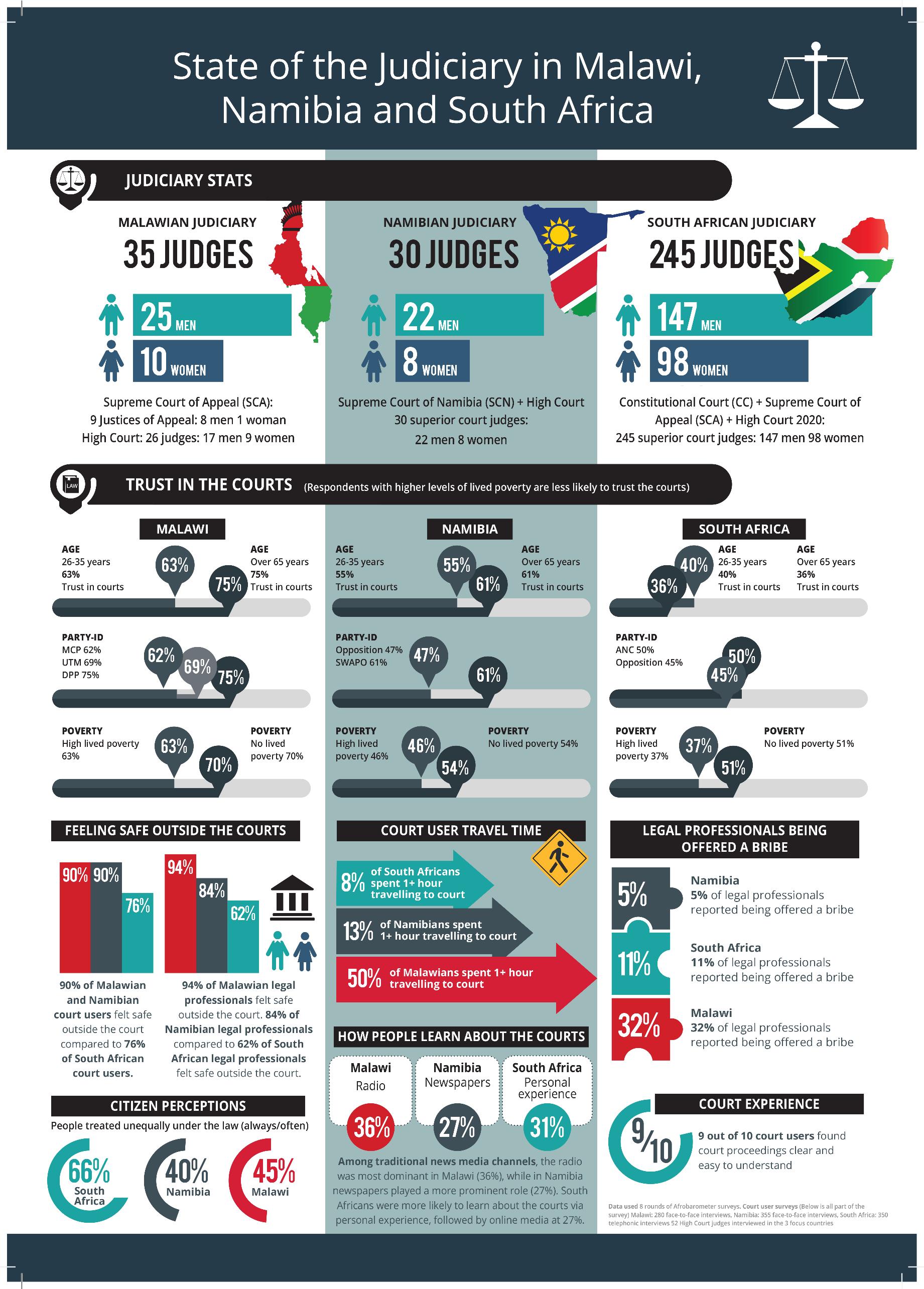 The study noted that as of September 2020, there were 245 judges in the South African superior court judiciary, 98 of whom were women.

Information on the performance of the courts was obtained by researchers from the judiciary’s annual report for the 2020-2021 financial year.

During this period, the Constitutional Court finalised 273 out of 445 matters before it (a 61% finalisation rate, below the target of 70%). The report indicates a 10% increase in the court’s caseload during this period.

With regard to the performance of the specialist courts, the labour courts finalised 2,188 out of 4,168 matters (achieving a rate of 52% against a target of 58%); the land claims court finalised 108 out of 149 matters (72% compared to a target of 60%), and the significantly less busy electoral court and competition appeal court finalised nine out of nine and 10 out of 10 matters respectively.

Data provided by the judiciary on the performance of the high courts was disaggregated between criminal and civil matters.

The report identified 870 outstanding criminal trials and 353 backlog cases (at 41%, this is above the target of 30%).

Office of the Chief Justice

Respondents to court user questionnaires by DGRU, including citizens and legal professionals, criticised the Office of the Chief Justice (OCJ) “for being staffed by personnel ill-equipped to deal with the needs of the judiciary”.

Telephonic interviews were also conducted with high court judges across all three countries.

“In fact, the OCJ was seen by some respondents as a hindrance, rather than a help. Judges’ responses regarding the OCJ suggest that there is a need to re-examine how this office can best serve the needs of the judiciary,” noted the authors.

South African judges faced challenges “including access to tools of the trade (an issue exacerbated by remote work), which included insufficient online resources and poor digital infrastructure (an issue that compromises the security of the institution on a broader level),” the authors found.

A judge canvassed by researchers had cited the expiry of software licenses, breaches in online security (email) due to lack of firewalls, and suspended services for online resources as major challenges. Further obstacles were infrastructural, including broken air conditioning.

These challenges aside, the courts in South Africa, it is clear, weathered the Zunami and will be dealing with the collateral damage for years to come as Zondo commission reports steer law enforcement agencies toward those implicated and exposed. DM