What is South Africa’s future? Five excellent books have the answer 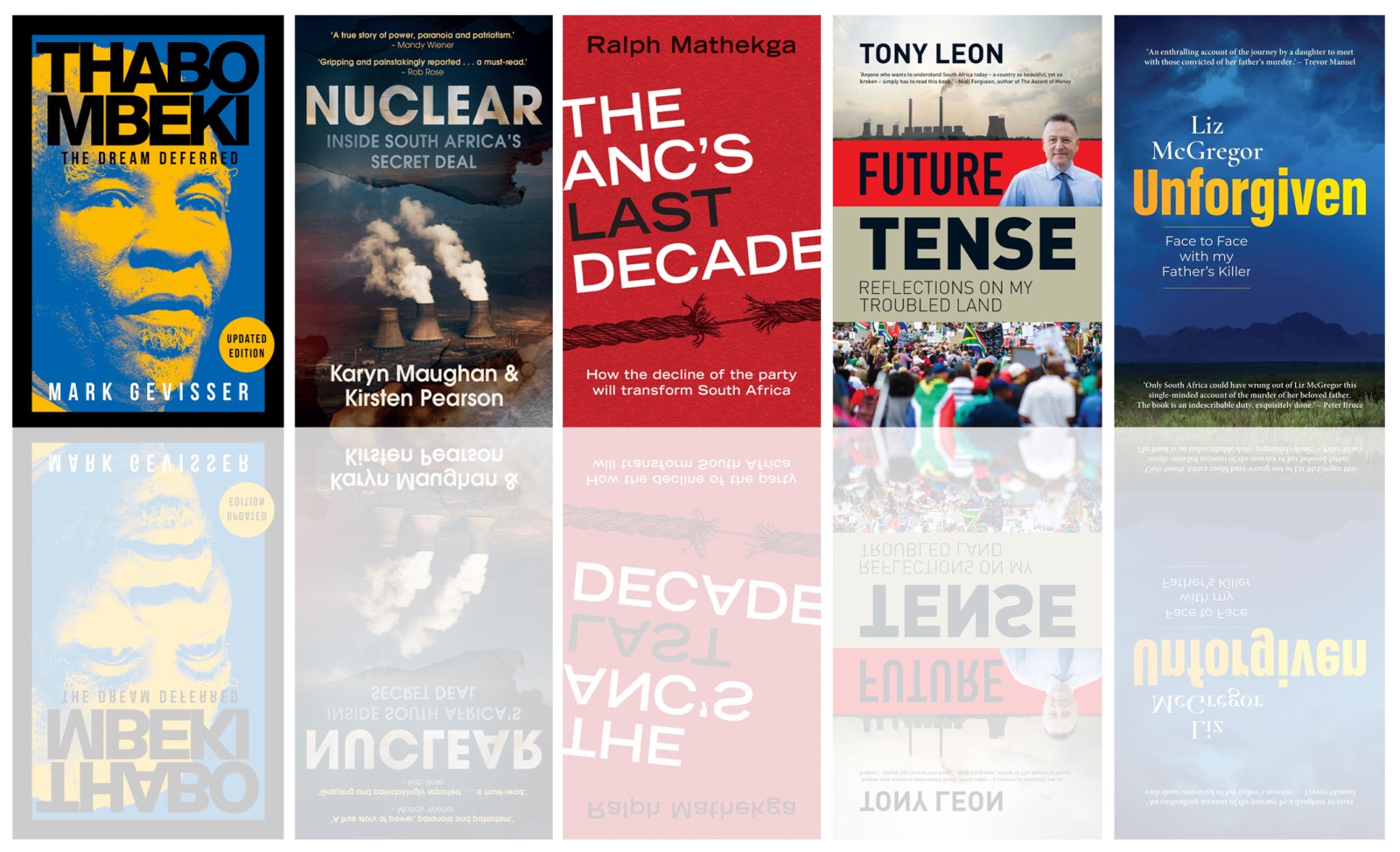 With winter around the corner, what better place to travel than inside the covers of these excellent books, which tell the story of South Africa as it was and as it will be.

How close South Africa came to the edge in the final days of former president Jacob Zuma’s administration is made clear in Karyn Maughan and Kirsten Pearson’s Nuclear. This meticulous account of the deal that could have bankrupted the country is a must-read in your winter compendium.

Maughan, an award-winning journalist and documentary-maker, and Pearson, a former National Treasury insider, have pieced together the anatomy of the nuclear plan. Through interviews, a close reading of the State Capture Commission of Inquiry and Pearson’s front-row seat to how civil society fought back against it, you get an anatomy of the plan.

Near the end of his kleptocratic administration, Zuma became desperate as the National Treasury threw spoke after spoke in the way of the deal. He fired two finance ministers – Nhlanhla Nene and Pravin Gordhan – because he could not get the request for information parsed into a deal with Rosatom to build a fleet of nuclear-fired power stations. Nene lodged documents with the commission, which Maughan and Pearson narrate in their book.

The cost estimate of the deal at the time was north of R1-trillion and would have bankrupted South Africa, the authors write. In an interview with Zuma’s energy minister, Tina Joemat-Pettersson, whom it was assumed had signed off an agreement of interest, it turns out that Zuma in fact wrote that letter.

The book is dotted with gems like this which gives it heft, authority and significant public interest.

Civil society put the kibosh on the deal and signposted why this sector is so crucial to any discussion of our future.

The former teacher and nun Liz McDaid, now a full-time environmental advocate, and Earthlife Africa’s Makoma Lekalakala were applicants in a court case seeking to interdict the nuclear deal, which resulted in the nightmare transaction being set aside.

Despite his best efforts, Zuma could not get it put back on the road and by the beginning of February 2018 he was ousted.  The book reveals the potential that lies in civil society as democracy’s best hope.

Nuclear is rocketing up the best-read lists.

The fluid and lucid style of Dr Ralph Mathekga makes The ANC’s Last Decade a pleasure to read. Mathekga argues his main point with crystal clarity. And that point is that the ANC is following in the footsteps of other liberation movements on our continent and in the world. They tend to last in power for just under three decades. By 2024, the ANC will be at that mark and all pointers are that it will be the election that begins the party’s end. Mathekga writes that the ANC is becoming increasingly regional in its identity, with provinces becoming fiefdoms of localised political factions.

He knows the party better than any analyst in South Africa and he argues with his breadth of knowledge and a global eye that the ANC is in the final laps. Mathekga’s book came out before the November 2021 local government election when the ANC did worse than even its own polling expected.

What the book shows is that when the ANC’s end comes, it is unlikely to be followed by an Armageddon scenario. Instead, the political landscape is likely to fracture and coalition governments will increasingly be a common feature, in the way that they already are at local government level.

Equally pacy is Tony Leon’s Future Tense – Reflections on My Troubled Land. The former DA leader’s book came out in 2021 but remains a relevant compass.

Like his weekly column published by Arena Holding’s media titles, in the book Leon writes assertively and with great flair. The book casts South Africa in a global context, a welcome change from the myopia of much of the analysis about our country.

As South Africa’s former ambassador to Argentina and other South American countries, Leon places South Africa in its proper emerging country context. He is a scholar who reads widely, so the text is ablaze with wonderful quotes and comparisons.

As an opposition party politician, Leon is, of course, highly critical of the ANC government and especially of President Cyril Ramaphosa’s administration, which he writes off as ineffective and power-hungry. He argues the latter point in how the government over-managed and micro-managed its response to Covid. I am not so sure.

South Africa has done fairly well at managing the pandemic. It did not divert to former US president Donald Trump and Brazilian leader Jair Bolsonaro’s destructive denialisms; nor to Chinese Premier Xi Jinping’s Covid-zero nationalism. Instead, South Africa’s response has, on the whole, been science-led.

If there is a shortcoming in Leon’s analysis it is that it presents the foreign business critique of the country as a shibboleth. And, of course, he argues for the status quo insofar as property and economic power relationships go – a position perfectly unsustainable in a country like ours.

This is unsurprising as his company, Resolve Communications, is a consultant to foreign investors. Yet, if the era of State Capture has taught us anything, it is that the likes of Bain & Company, McKinsey, Swissport, KPMG, Deloitte and other multinationals were complicit in corruption at multiple locales.

Where the book is most interesting (and often riveting) is when Leon tells you what he really thinks of the DA.  He was asked by former leader Mmusi Maimane to head an inquiry into why the party crashed in the 2019 national elections.

The story of how that report landed and ended in Maimane’s dramatic exit is worth reading on its own.

For all its criticism, the book ends on a surprisingly and persuasively optimistic note about South Africa. I won’t give it all away, but it closes with Leon and his wife, Michal, making peanut butter sandwiches at their kitchen table.

A must-read for the year will be Mark Gevisser’s Thabo Mbeki – The Dream Deferred, brought out for former president Thabo Mbeki’s 80th birthday year.

Gevisser is Mbeki’s biographer and also, to my mind, in the very top tier of political writers. His research is deft. His style is melodic. He has written two new chapters and an introduction to the biography for the updated edition by Jonathan Ball now in bookshops.

Mbeki has re-emerged into the political firmament. He has been assigned by the ANC with the Sisyphean task of assisting “renewal”, the euphemism by which the party names its anti-corruption campaign.

Gevisser looks at what Mbeki’s re-emergence may mean for the ANC and for South Africa and he examines the nostalgic welcome the former head of state has received in the court of public opinion.

In the shorter international edition, the book has been republished as The Dream Deferred.

Liz McGregor’s Unforgiven is a magnificent opus.  Less a political guide and more a book that grapples with grief and redemption and history, it will leave you both heartbroken and joyful.

McGregor is a renowned South African writer and editor. In 2008, her father, Robin McGregor, was brutally murdered in his home in Tulbagh in the Western Cape. McGregor refuses to let him become just another headline, a footnote to South Africa’s murderous crime rate.

Robin McGregor’s story, as meticulously written by his daughter, reveals him to be a wonderfully cantankerous, ambitious and effervescent man. A great dad and a highly regarded South African.

The irony of his death is that he chronicled the strictures of the highly concentrated apartheid South African economy that led to the marginalisation and poverty that were the milieu in which his murderer (or murderers, perhaps) were created.

Robin McGregor did many things in his life, as his daughter recounts. But he is best remembered for McGregor’s Who Owns Whom, the annually updated reference of how South Africa’s listed wealth is held.

Liz McGregor’s book is both an ode to her father and a quest to find out what drove Cecil Thomas to murder him in a frenzied stabbing spree. Her final meeting with her father’s murderer is the end of a long quest.

The author revisits the theory and practice of restorative justice, especially where it intersects with impermeable prison gang culture. Rebecca Davis has reviewed this excellent book here.

Where it fits into the pantheon of thinking about South Africa’s futurescape is that it is the very poignant story of one woman grappling with her history, present and future in South Africa. DM/ML