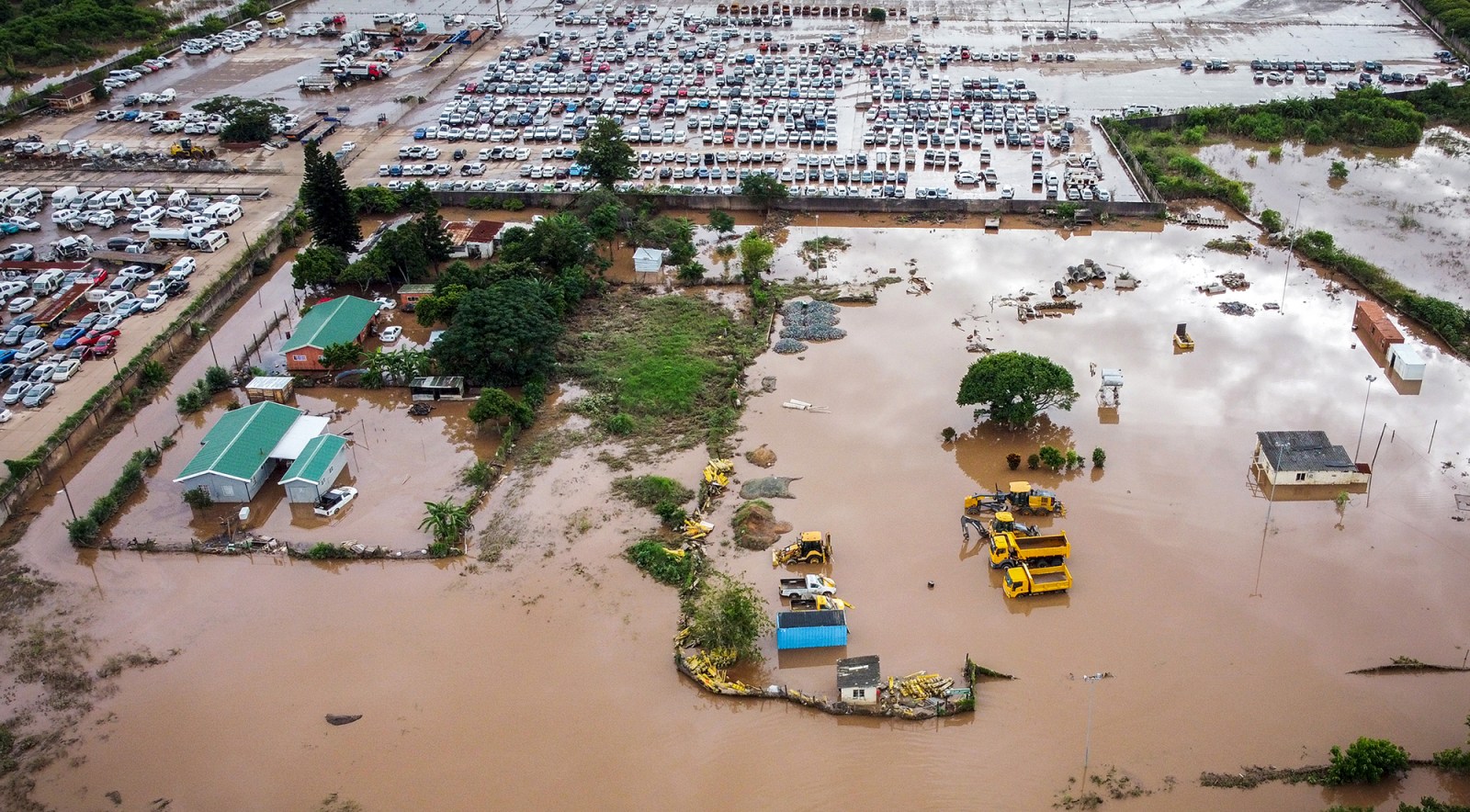 A drone image of the extent of the damage caused by flooding in Prospecton, Durban on 13 April 2022. (Photo: Shiraaz Mohamed)

Rescue organisations say even the slightest amount of rain could have disastrous effects on flood-affected communities in KwaZulu-Natal, who are still battling to access clean water. A municipal employee overseeing the use of water tankers was shot dead at the Ottawa water depot this weekend.

Poor weather is continuing in flood-affected regions in Kwa-Zulu Natal, where the eThekwini Municipality is experiencing rain showers that will continue into Monday, 25 April, according to forecasts.

“The weather right now is very terrible; it’s closing in. Yesterday, it was raining as well,” said Mqapheli Bonono, deputy president of the Abahlali baseMjondolo movement. The organisation is playing an active role in providing food, clothes and other necessities in affected areas of eThekwini, including Mariannridge and Wards 13, 14 and 15.

“We are very worried about the people… This disaster did not only wash away some of the houses, but it also put other people at risk,” he said. “There are houses that are hanging over cliffs… Even small droplets of water, and then of rain, can have an impact on those people that are already at risk.”

It is difficult to predict what further damage the rains could cause, according to Grant Tyson, chairperson of Search and Rescue South Africa Gauteng. In many areas, the ground is so saturated that rainwater is not being absorbed, but rather washing into rivers.

“A lot of the roads, obviously, have been washed away, [exposing] massive boulders, so you can’t really cross… You can’t get anywhere,” said Tyson. “I would imagine big, big construction-type efforts are going to have to start taking place to get some of those roads open.”

Tyson’s search-and-rescue team recently withdrew from the field after seven days of rescue efforts. New teams are continuing operations in their stead.

“I feel very worried and concerned about the teams that are still pushing through because they are going to get very fatigued. I worry that guys are going to start making mistakes,” he said. “But… they are professionals, they do what they need to do, and hopefully they get through in one piece.”

The present rains will not stop the search-and-rescue efforts on the ground, said Tyson, though the weather could affect the type of resources used. As helicopters are not always a viable option in heavy rains, rescuers may need to drive to a greater number of locations, which takes more time.

Many in flood-affected communities are homeless, with nowhere to go. Those who have lost loved ones have not found closure, according to Bonono.

“People are traumatised. There’s reports of people attempting to commit suicide because they have nowhere else to go,” he said. “We are told that the government is assessing the situation… How do you then assess the situation two weeks later, when people are desperate? It’s an urgent crisis. It’s a humanitarian crisis… You don’t need two weeks to respond to such a crisis.”

Many communities have been left without water or are exposed to sewage leakages because of damage to sanitation infrastructure, according to Minister of Water and Sanitation Senzo Mchunu. A landslide in Inanda damaged two of the four aqueducts that carry water from the Nagle Dam to the Durban Heights Water Treatment Plant, leaving them non-operational.

“That damage … meant that eThekwini lost 280 megalitres of raw water supplied to Durban Heights Treatment Plant, meaning a reduction down to 175 megalitres per day from other sources,” said Mchunu at a water and sanitation “war room” briefing on Sunday, 24 April.

Assessments have been completed for repairs to the two damaged aqueducts. The date of completion for repairs on one pump shaft was initially set for 24 April. Power interruptions in Durban Heights and the surrounding areas, however, have delayed completion to 26 April.

The damage to wastewater treatment plants and sanitation infrastructure has resulted in sewage pollution flowing into rivers including Umlazi, Tongaat and Isipingo, according to Mchunu.

“We have therefore asked our director-general, Dr Sean Phillips, to come down next Sunday [1 May] to hold a meeting with [the managers] of these municipalities … and to quickly ascertain the amount of spillage to the rivers and the amount of damage, or the extent of damage, to sanitation infrastructure,” he said.

A 36-year-old woman employed by eThekwini Municipality was shot and killed on Old Main Road in Ottawa on Saturday, 23 April. The incident took place outside the Ottawa depot for water and sanitation.

Officers and medics from Reaction Unit South Africa (RUSA) arrived on the scene just after 3pm, after receiving a call from a passerby who saw two men fleeing the scene in a red Seat Ibiza. The registration of the vehicle is unknown, according to a RUSA Facebook post about the incident.

The victim, who had been shot multiple times, was found next to a water tanker and declared dead by medics. She had been overseeing the use of trucks to distribute water to areas experiencing disruptions and had just returned from Tongaat when she was shot.

Kaunda has called on law enforcement to leave no stone unturned in finding and arresting the gunmen.

“We are in the grip of a disaster and this murder is something we do not need. We condemned it and we hope the police will move with speed and arrest those responsible,” Kaunda said in a media statement.

“This employee was entrusted with a critical responsibility of controlling our water tankers. We urge anyone who may have information with regard to this unfortunate incident to work with the police. We send our heartfelt condolences to her family and colleagues.”

The motive for the killing is unknown. DM