Abahlali tries to clean up and rebuild after KZN flood deaths, destruction, heartache and trauma 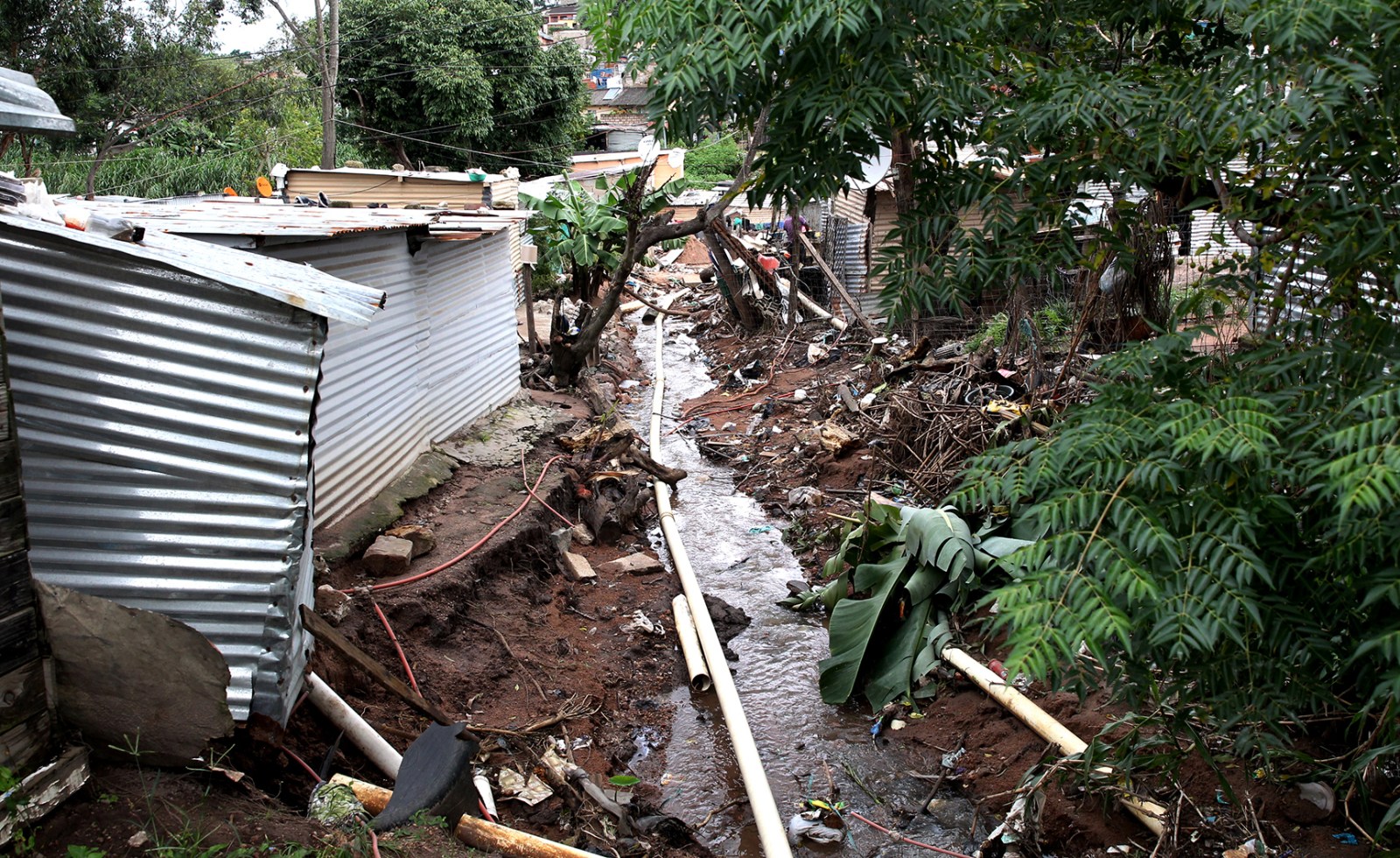 The death toll and tally of destroyed homes continue to rise as KwaZulu-Natal starts to rebuild what was decimated by devastating floods. Shack dwellers’ movement Abahlali baseMjondolo has been at the forefront of helping in the search for missing people, finding shelter for those left homeless and feeding the hungry. Zukiswa Pikoli spent time over the Easter weekend hearing their heartbreaking stories and seeing their efforts to rebuild.

Cato resident Sakubonga Ndlangisa (22) lost his three month old baby girl and was still visibly shaken when speaking to Maverick Citizen and did not want his photo to be taken. “It was raining and the mother of my child had just bathed our baby when we heard a loud bang in the back, I went outside to check and that’s when I saw the wall was falling onto where the baby and mother were, trapping them inside. My father and I managed to pull them out and neighbours helped us get to hospital. My daughter died on the way to hospital.” Ndlangisa’s baby was due to be buried on Wednesday, 20 April.

Virginia Maphaila (60), who lives with her two grandchildren and daughter, says that on the day of the floods which was Tuesday 12 April, at about 2am, her neighbour’s back wall collapsed onto her home. “The wall hit my house on the side and it caved in on one side and then water started rushing in. I told my grandchildren to run to the neighbours, because it was not safe for them to be in the house while my other neighbours tried to help me stop the water coming in and more bricks from the broken wall were falling in. Luckily my son’s shack was still standing and we went to shelter there.” Maphaila, a domestic worker, says that she has had to ask for time off from work because she needs to guard her belongings, all of which are now outside since she has nowhere to store them.

Mbusowakhe Sishi, who has been living in Cato Crest for eight years, says: “On the night of the rain my house had mud piling up and pushing it, then the pit toilets behind it fell into my house. I now have nowhere to live because it is unliveable there. But I will have to dig out all the mud and remove the toilet so that I can rebuild it when the soil is no longer wet.”

Lulama Lungwana says she and her husband were sleeping when the house behind her fell on top of hers, breaking the walls and causing mud and water to rush in. “This destroyed all my furniture and everything that was inside my home; our bed was even pushed out of the house and into the neighbours’ yard. We are pleading for help so that we can get building materials to rebuild.”

In the eNkanini informal settlement in Cato Manor which is 5 km south of the city of ethekwini,  Maverick Citizen found 59-year-old Hlophe Cele stooped over her fridge, scooping out mud that had been washed down by mudslides as her home was swept away. Fortunately, she had not been in the house when it happened. “It was raining really hard when I got home from work. I saw that my neighbour’s house had fallen and when I got to my house I tried to open it but was shocked by an exposed electrical wire. So I decided to leave it and go to a neighbour. When I came back the following day, I found my belongings, like my fridge and bed, lying outside. I couldn’t even find my clothes or food that was in the house.” Cele says all she has left is the uniform she wore to work, and has found shelter with a friend who lives close by. Pointing to the clothes she is wearing, she says they belong to a friend – she lost all of hers during the flooding.

Mbongeni Mbanjwa, who is deaf, was alerted by a neighbour that he was in danger. He could not hear how heavy the rain was and that a tree behind his shack had crashed into his home. His neighour told Maverick Citizen that three other trees followed. Had Mbanjwa not been alerted, he may have been badly injured, or may not have survived.

Most of the shacks in the Cato Crest and eNkanini informal settlements are so steeply built into the now muddy and slippery hills that even on an ordinary day getting to them is difficult. Now the situation is worse owing to the rains. Tyres, discarded planks and random rocks are used as footholds to get to homes. Makeshift bridges and water pipes have been broken and washed away, while exposed electrical wires pose a threat to adults and children.

At the eNkanini community hall in Cato Manor, Maverick Citizen found several people gathered in the floorless and muddy makeshift structure built by residents. It had no door and rain poured in through holes in the zinc roof. “I have five children and my Sassa cards have been washed away by the rain, so I do not know how I will now receive their grants,” Nomxolisi Walaza tells Maverick Citizen. He laments the loss of his identity document when his house was destroyed – he is particularly agitated because he needs it for work. Another resident is distraught because her children’s school books and belongings have been lost. “How will my children learn and go to school now? I am scared that they will fall behind in their schoolwork.”

On Monday evening, President Cyril Ramaphosa announced a national state of disaster, saying that by the end of the week a disaster management task team would initiate a plan to provide shelter for those without homes. “An immediate task is to house those people who have been displaced by the floods. Preparations are under way to provide temporary residential units and it is expected that construction of these should begin by the end of this week. Financial assistance through a voucher system is being made available to assist households to rebuild partially damaged houses,” he said.

Abahlali baseMjondolo has been in the thick of responding and trying to help people living in shacks who have been affected the most by the flooding. With the death toll above 400 and many more reported missing, the situation has never been more desperate.

Abahlali national coordinator Busisiwe Diko says branches throughout the province are going door to door to find people who need help, compiling a list of names and what they needed immediately. They were appealing to ordinary citizens and fellow civil society organisations to assist in any way they could, and so far had received donations of instant porridge, clothes, blankets and sleeping mats.

After the flood relief efforts, Diko says Abahlali would like to engage the state on the “indignity” that shack dwellers live with. “Our human dignity should be respected, protected and promoted by the state.” She says it is in crises like this that poor people living in informal settlements are the worst affected, whether by fires, floods or Covid-19. “We wish that our government could one day take notice of us and provide us with decent, adequate, quality and solid houses.”

People in the Cato Crest and eNkanini informal settlements told Maverick Citizen what they needed the most right now was shelter and materials to rebuild their homes, even though they were worried that the soil was still wet and that the rains would return soon. DM/MC