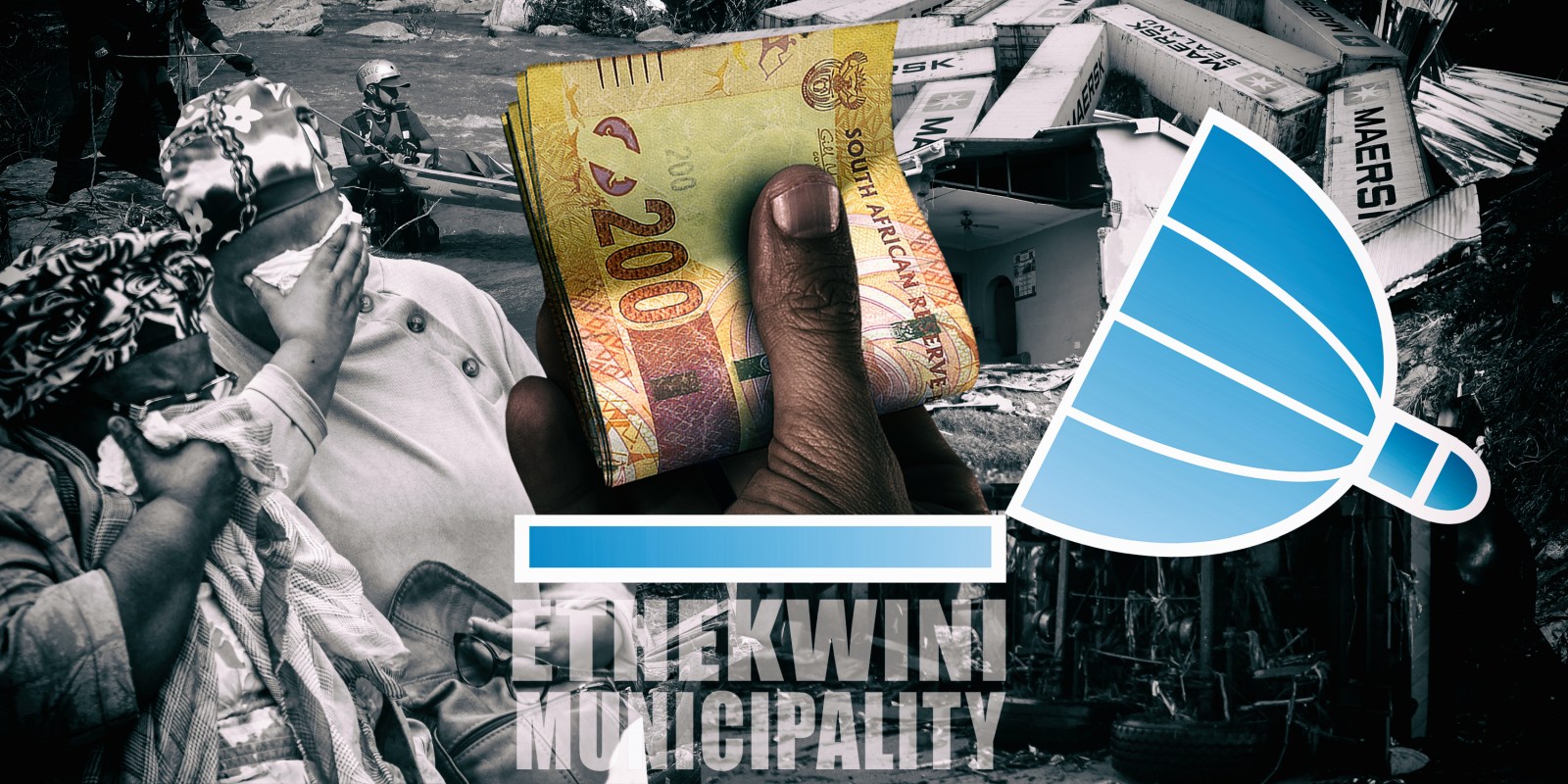 It is time to consider and define the theft and corruption of disaster relief funding as a crime against humanity, a treason against the people.

When devastating floods struck KwaZulu-Natal on 11 April, South Africans’ first response was to commiserate with their compatriots. Their next response was to warn against giving a cent to the government and loudly proclaim that their donations were going to organisations like the Gift of the Givers.

Within days, news emerged that eThekwini Council members were trying to hijack donations meant for the rescuers looking for the dead and the desperate.

No doubt they were trying to divert these to patron politicians to use for self-interest. The donations were a sign of human solidarity — not the grease of patronage.

Then, on the Easter weekend, the province’s premier, Sihle Zikalala, had a water tanker diverted to his house in La Mercy, Durban. He bluffed and blustered at first, saying his home was a centre of community care and welfare led by his wife.

By the end of the week, he apologised (with more bluster, it must be said) as calls grew for his head.

The patronage, the aggrandisement and the abuse of power were so blatant that they took many by surprise. It also did not surprise millions more of us. We expect democracy-defying thievery and puffed-up political behaviour as par for the course. The time for that must surely be over.

It is time to consider and define the theft and corruption of disaster relief funding as a crime against humanity, a treason against the people.

We’ve seen it before. Last year, after the first deaths from Covid-19 were tallied, the hyenas assembled when the government released disaster funding. Fly-by-night companies were set up by cadres who had inside knowledge of what contracts were coming up, hunting in packs, as the Special Investigating Unit of advocate Andy Mothibe and his team have shown.

Masks, medicines, and sanitisers were priced for super-profits and sold into the public sector, which was buckling under the pressure of the sick and the dying. Useless pandemic fripperies like fogging equipment and chemicals were sold to schools and government buildings. Fogging defied science, but civil servants in cahoots with politicians paid billions of rands and made fortunes which they splurged on parties, cars and other bling goods.

Others built hospital extensions for Covid-19 patients which haven’t been used to this day. As Maverick Citizen has revealed, these hospitals look like latter-day concentration camps and are abandoned mainly because they are so poorly built and unsuited to care and healing. Companies with politically connected owners made fortunes to fund the lifestyles of the rich and wannabe famous.

The numbers are still coming in, but up to 300,000 people in South Africa may so far have succumbed to Covid-19. The cemeteries are overflowing, and peoples’ lives have been devastated by the pandemic, with joblessness higher than it’s ever been. Desperation is everywhere and KwaZulu-Natal has been hit three times.

First by the pandemic, second by the insurrection and looting in July 2021 and now by the deadly floods that have claimed at least 435 lives and left thousands of people destitute.

Homes and shacks in Durban, built on floodplains and hills, show the paucity of planning by the ANC-led council. The council is the centrepiece in the story of looting and mismanagement that has come to define the governing party nearing its third decade in power.

Corruption is so much a part of the party’s governing culture that neither the council nor Zikalala could understand why people were so angry at the greed displayed for all to see.

There is, however, a silver lining.

It’s clear that good South Africans have had enough and have lost their fear of rotten politicians. A community good Samaritan parked her car in front of council officials and revealed their plan to hijack donations.

In the premier’s suburb, where he personalised a water tanker delivery (he had it diverted there from the disaster zone it was en route to), the community put the delivery on TikTok and blasted it on to phones throughout the country.

Armed with their phones and social platforms, from TikTok to Facebook, Twitter and WhatsApp, the people of South Africa have shown that they have had enough, that they have lost their fear.

Whereas the tech platforms can harm, this week they became a force for good wielded by active citizens.

Therein lies a lesson. Zikalala should have tendered his resignation by now. Mxolisi Kaunda, the mayor of eThekwini, filled his Facebook page with posts demanding former president Jacob Zuma’s release in July last year while his city was burning.

Neither will resign, but that does not mean that we cannot say that their crimes are treason — a crime against humanity. DM