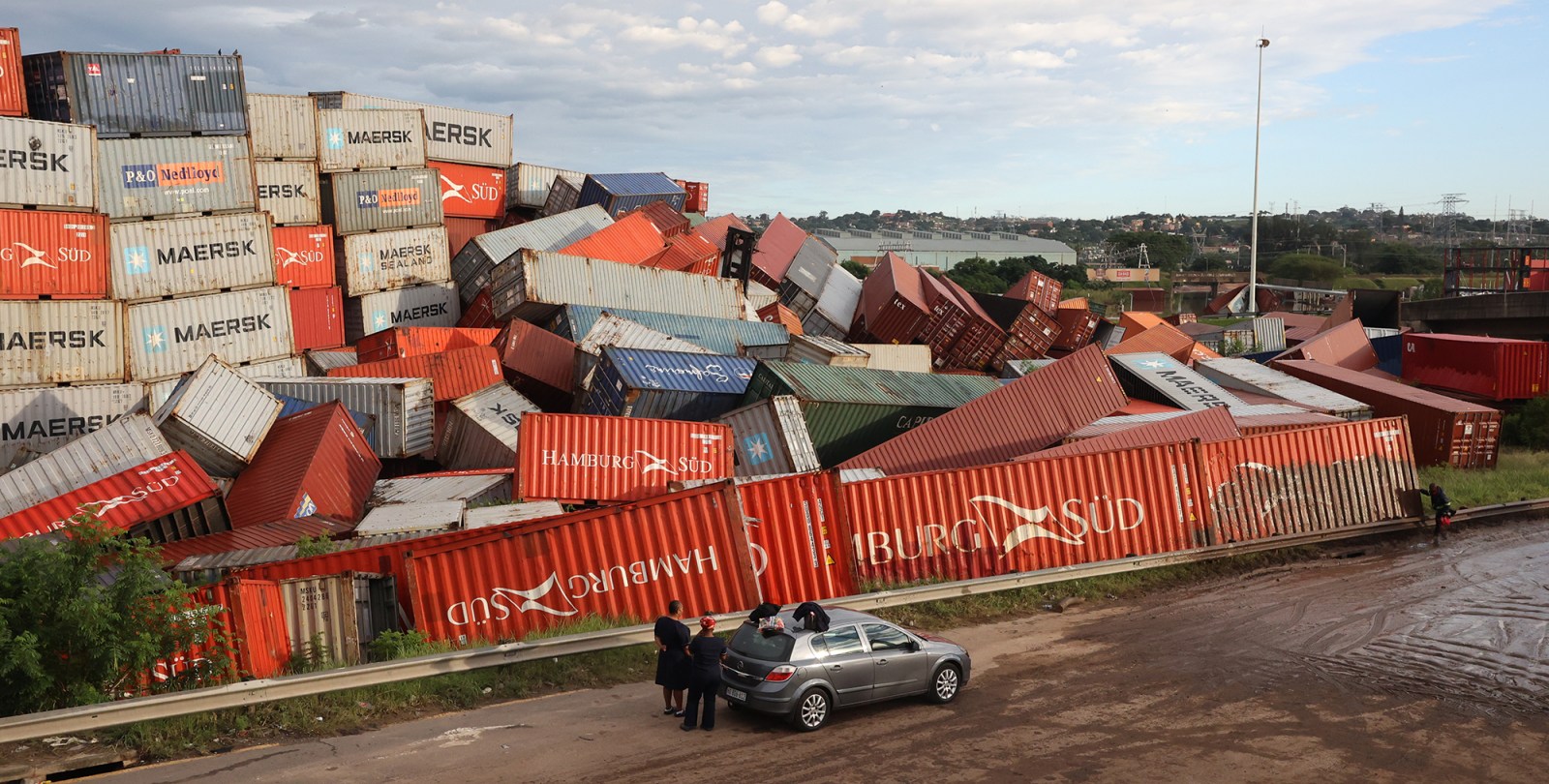 Hundreds of shipping containers washed away by recent flood waters near Durban, South Africa, 13 April 2022. Key roads in the area have been damaged and mudslides destroyed houses. The South African National Defense Force have been called in to assist as President Cyril Ramaphosa visited the area on 13 April. (Photo: EPA-EFE/STR)

Massive destruction from the devastating flooding events that took place in KwaZulu-Natal last week is another reminder about the urgency to bolster flood resilience in South Africa.

With more than 440 lives lost, an estimated 4,000 homes having been destroyed and road damage of at least R5.6-billion, it’s no surprise that President Cyril Ramaphosa on Monday announced a national state of disaster.

Climate change is often mentioned as a key reason for the extreme flooding events that we’ve just witnessed. And even though climate change is a factor, we cannot ignore the fact that we must improve our existing infrastructure, while also implementing better preventative measures — both structural and non-structural — to save lives and livelihoods.

Listed below are three practical ways in which we can begin to become more flood resilient.

It’s not the first time that areas such as eThekwini have suffered flood damage in recent years. Back in 2019, the city experienced flood events, and among the key criticisms then was that maintenance of drain infrastructure was not performed regularly or sufficiently.

It’s important to highlight that this is not a problem unique to eThekwini. Many African and Asian cities struggle with maintenance budgets and waste management policies. Nevertheless, maximising efforts to reduce blockages in drainage channels will improve the runoff when large rainfall needs to be discharged.

The focus of urban drainage, though, should not only be on discharging water as quickly as possible. It’s also important to retain water in an urban catchment and delay runoff so as to build flexibility and resilience in our water system for extreme weather.

Water-sensitive cities such as Singapore and Rotterdam have taken water retention further by developing parks that are strategically situated in flood-prone areas to act as extra water retention mechanisms. This type of approach requires interdisciplinary cooperation of water management, urban design and landscape planning. And because South Africa is a developing country, there is the potential to reshape our cities in this regard.

President Ramaphosa in his state of disaster announcement further highlighted the importance of not building homes in floodplains along rivers. This is a more obvious approach, but a vital one in a country like South Africa where urbanisation, lack of urban planning and growth of informal settlements are serious challenges.

Weather services can predict heavy rainfall and flash flooding to provide early warnings to residents, but these forecasts cover general areas — such as Johannesburg — rather than specific locations — like X Street in Zandspruit. People are less likely to react to general warnings, which is why flooding often catches them unaware and unprepared. The dissemination of early flood warnings to the general public, therefore, needs to improve.

Technology solutions exist that can predict a flood up to 12 hours before it is likely to occur, providing real-time detailed flood information down to street level. This can help emergency response services plan ahead, protect property, and keep people safe. These solutions can even alert residents in flood-prone areas about approaching storms.

This helps communities, municipalities, and businesses to be better prepared. The risk of flooding cannot be removed entirely, but early-warning systems enable us to lessen the impact by enhancing the response.

A final measure involves creating more awareness among towns and cities of what the current flood risks are in their specific areas. This includes awareness of general flood risks of their house, street or neighbourhood as well as receiving early flood warnings in a timely manner.

It’s crucial that all towns and cities conduct a risk assessment or even update previous risk assessments by closely looking at their vulnerability to extreme flood events and establishing where severe flood-prone areas are situated.

With a changing climate, flood risks are likely to increase and new risk areas could arise. This allows officials to label the various risks and inform citizens and residents of what dangers they face depending on where they are situated. Also, it will assist the municipalities in drafting an adaptation plan to become resilient for future events. Thanks to existing technologies, it’s possible to digitise these maps and enable community members to view their risk levels on their mobile phones or computers.

With extreme weather events, these types of measures won’t completely prevent all infrastructure from being damaged or lives being lost. However, it will go a long way in at least mitigating against damage and improving climate resilience.

As a country, we have an opportunity to use last week’s tragic events to spur greater preparedness and flood resilience for the future. OBP/DM

Tjeerd Driessen is Royal HaskoningDHV’s Leading Market Director Climate Resilience in the Africa Region. Royal HaskoningDHV is an independent, international engineering and project management consultancy with 140 years of experience and 6,000 colleagues across the globe.