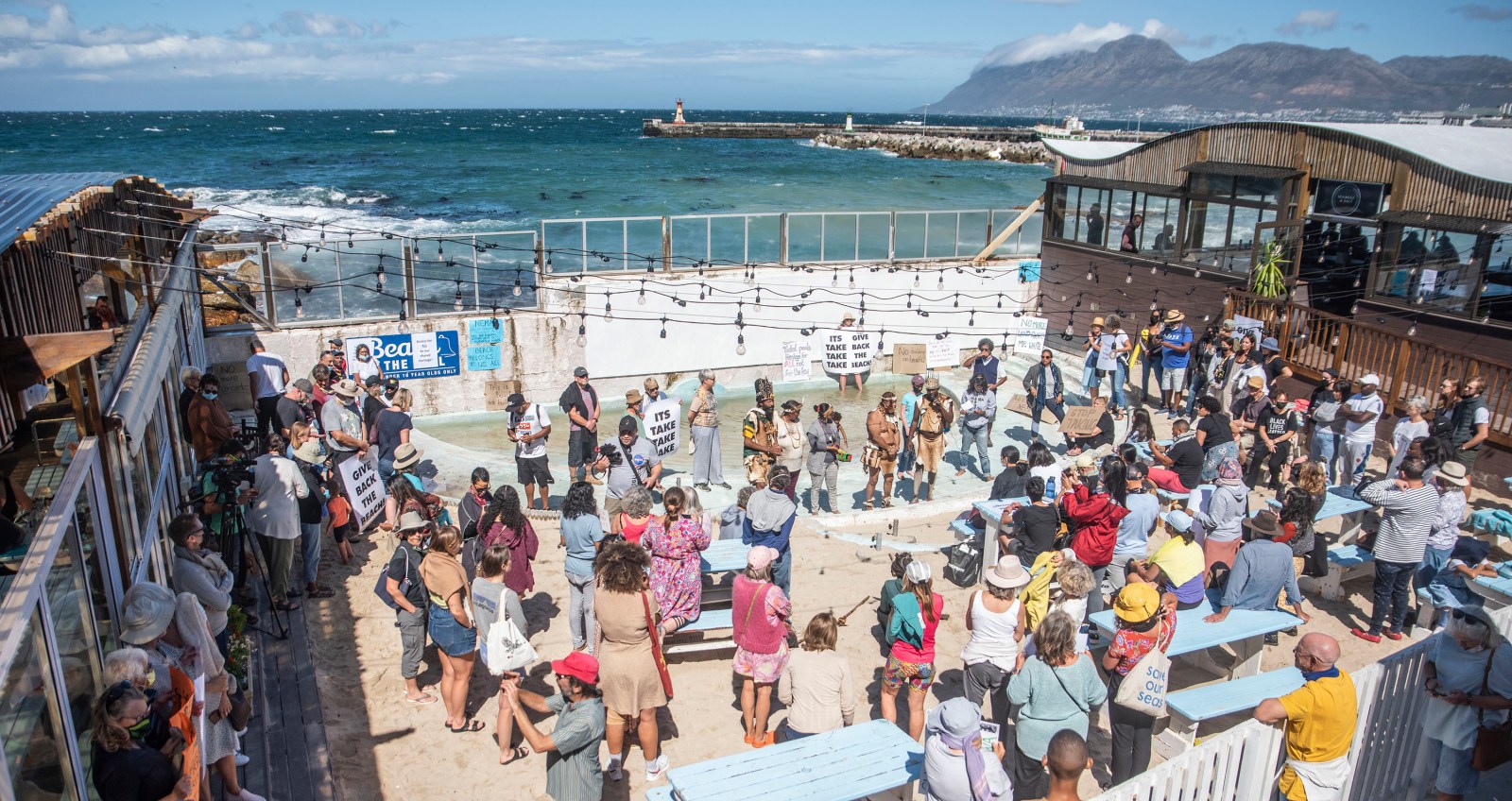 More than 200 people protested against construction at Kalk Bay Tidal Pools in Cape Town on 2 April 2022. The protest came after Brass Bell planned to build a deck over the last piece of sand at the children’s pool. (Photo: Gallo Images / Brenton Geach)

Kalk Bay’s Brass Bell restaurant has shelved its plans to construct a wooden deck over an area of beach near the historic tidal pools after a backlash from residents, prompting the City of Cape Town to intervene.

After the City of Cape Town met the Passenger Rail Agency of South Africa’s (Prasa’s) Corporate Real Estate Solutions division (Cres) and the National Department of Forestry, Fisheries and the Environment’s (DFFE’s) Oceans and Coasts Environmental Compliance branch on Tuesday, 5 April for talks on construction activities at the Brass Bell restaurant in Kalk Bay, the owner of the restaurant says he will not proceed with the project, for now.

“I do not intend at this stage to proceed with the small wooden platform,” Brass Bell owner Tony White told Daily Maverick on Tuesday.

White began construction last month on an intended 3x7m wooden deck to “enhance the experience of patrons to the Brass Bell” by providing them with an area to sunbathe without getting covered in sand. The area had already been cleared and eight concrete footings installed on the beach when Daily Maverick visited on 31 March.

White’s expansion of the restaurant’s premises into the public space sparked an outcry from Kalk Bay residents, who called for an end to the construction that would expand the deck over a large area surrounding the children’s tidal pool.

Protests by residents took place on 30 March and 2 April at the Brass Bell, and the City of Cape Town, with a representative from Oceans and Coasts Environmental Compliance, inspected the site on Wednesday, 30 March after being alerted about the construction the previous day.

The land is owned by Prasa and is leased to the Brass Bell for commercial purposes. Cape Town’s deputy mayor, Eddie Andrews, previously confirmed to Daily Maverick that the city does not have a copy of the lease agreement or the conditions.

The land contains the Kalk Bay tidal pools, which consist of two large adjoining pools and a smaller children’s pool, and the Brass Bell restaurant. To get to the pools, swimmers need to walk through the Brass Bell, which has expanded over the years and now covers most of the area around the pools.

At the meeting on Tuesday, 5 April, “It was confirmed that Prasa Cres requires, in terms of the lease agreement, that the tenant must be aware of and meet all of the statutory requirements, such as an Environmental Impact Assessment (EIA), building plan approvals, health and safety compliance and fire safety where applicable,” Andrews said.

“Should the lessee be found to be in breach of this requirement he will be provided with the opportunity to comply with the applicable statutory requirements.”

On Friday, 1 April, the city’s building inspector served notices in terms of the national building regulations to White to cease building work to comply with section 4 (to obtain written approval for unauthorised building work within 60 days) and section 12 (to secure the building, ensure public safety and appoint fire and structural engineers).

“The city’s building inspector also served additional and separate notices on Prasa Cres as the landowner at the meeting on 5 April,” said Andrews.

“A land use application would need to be submitted to the city if the intended use of the erf requires consent or is not in line with its zoning rights, which may require the application to go through a public participation process prior to its consideration by the delegated authority,” said Andrews.

The construction took place within 100m of the high-water mark, which in terms of the National Environmental Management Act (Nema) would require an EIA. Andrews previously told Daily Maverick that “the determination as to whether an EIA is required depends on many factors, not only proximity to the high-water mark.

“Pre-constructed or pre-disturbed areas may not need an EIA — in this case, it is a determination that the national government will make.”

In terms of environmental compliance, Andrews said the following actions would be taken:

Andrews said White “is required to excavate and remove the eight concrete footings that he installed on the beach”.

However, White claims he had not been asked to remove remnants of the construction.

“I have not been requested to excavate and remove the concrete,” he said.

Faez Poggenpoel, a fifth-generation fisherman in Kalk Bay and a representative of the small-scale fishing community, told Daily Maverick that while this is progress, “it needs to be a statement to the government as well as to the city that they need to do more to protect these spaces — not only deal with the problem when communities rise up”.

Prasa Cres denied multiple requests for comment and maintained that this was not a Prasa issue, despite Prasa’s position as the landowner and its attendance at the meeting on 5 April.

The acting Metrorail Western Cape spokesperson, Nana Zenani, said the Brass Bell had carried out the renovations without informing Prasa Cres, and therefore the ​​​​establishment had to respond to queries, not the railway agency.

“Prasa was not aware of the renovations by Brass Bell,” said Zenani.

Prasa’s spokesperson, Andiswa Makanda, previously told GroundUp that when the construction was brought to their attention, a letter had been issued to the Brass Bell requesting approval documents. DM