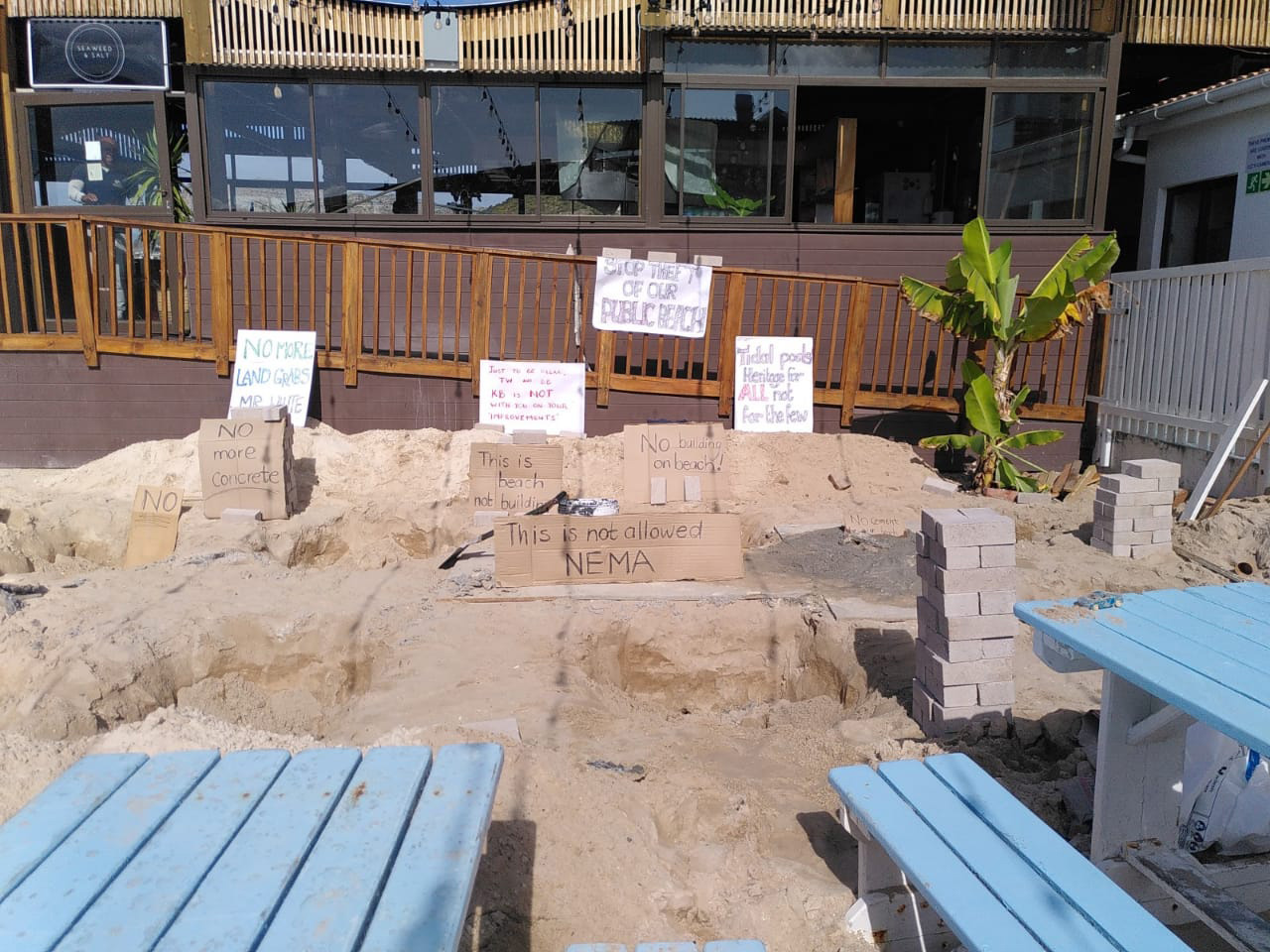 Placards from a protest against the construction of a new deck over the remaining area of beach at the Kalk Bay tidal pools near the public children’s tidal pool area, at Brass Bell restaurant on 30 March 2022. (Photo: Supplied)

Residents of Kalk Bay are once again crying foul after the Brass Bell restaurant began construction of a wooden deck, which would cover the last remaining area of beach near the historic Kalk Bay tidal pools. The City has responded saying construction has been halted for now. But concerns remain that due process was never followed as the private establishment continues to encroach on a public amenity steeped in historical value.

Residents of the historic fishing village of Kalk Bay have gone to battle against a  local proprietor and businessman to prevent further commercial encroachment on a public beach.

The Brass Bell restaurant in Kalk Bay – located along the railway line and adjacent to the Kalk Bay Train Station – came under scrutiny after it began construction on the last remaining area of beach surrounding one of the Kalk Bay tidal pools, prompting the City of Cape Town to intervene.

A small protest was held at the Brass Bell on Wednesday morning, 30 March, where local residents called for an end to the construction, which would see the expansion of a wooden deck over a large area surrounding the children’s tidal pool.

This is not the first time that residents have protested against Brass Bell owner Tony White’s expansion into public spaces. Almost 10 years ago, residents complained after White extended a deck on the beach near the tidal pools without public participation.

the heritage building that houses the Quagga bookstore, opposite the Brass Bell. The development plans are detailed in a heritage impact assessment which is currently circulating for public comment, the Sunday Times reported.

Another protest is planned for Saturday, 2 April, at the establishment.

Owner of the Brass Bell, Tony White said the plan was to build a 3 x 7 metre wooden deck to “enhance the experience of patrons to the Brass Bell”.

The deck would provide patrons with an area to sunbathe without getting covered in sea sand, and would be on the same level as the sand and the same colour as the sand, according to White.

The land is owned by the Passenger Rail Agency of South Africa (Prasa) and is leased to the Brass Bell restaurant for commercial purposes. The City of Cape Town confirmed to Daily Maverick that it does not have a copy of the lease agreement or the conditions.

The area of the site in which the construction of the deck has begun, consists of a sandy “beach” area with a small children’s pool, which White claims “is part of the restaurant and leased to the Brass Bell by Prasa”.

The construction took place within 100 metres of the high water mark, which in terms of the National Environmental Management Act (Nema) requires an Environmental Impact Assessment. The City of Cape Town told GroundUp that “although the work is within 100m of the high-water mark, a determination also has to be made as to whether it is a pre-disturbed footprint or not”.

“I had no idea that an unobtrusive deck that size would need formal approval by Prasa. I now know this to be the case, and will not proceed with the deck unless I have formal approval,” White told Daily Maverick.

“We immediately engaged with Prasa on the matter and went on site on Wednesday morning, 30 March, with a representative from the National Department of Forestry, Fisheries and the Environment (DFFE) Oceans and Coasts Environmental Compliance.

A meeting between the City, Prasa and the DFFE Oceans and Coasts Environmental Compliance has been scheduled for next week.

“All issues and aspects will be discussed at this meeting, as well as the way forward,” said Andrews.

The land on which the Kalk Bay tidal pools – which include two adjoining pools and a smaller children’s pool – and the Brass Bell restaurant are located, is “steeped in heritage and historical importance”, said fifth-generation fisherman in Kalk Bay and representative of the small-scale fishing community, Faez Poggenpoel.

However, to get to the pools, swimmers must go through the Brass Bell restaurant, which has expanded substantially over the years, and now forms a large area around the pools.

“Effectively what [Brass Bell] has done is they’ve privatised a public amenity with deep historical value and importance to the local community. The area is steeped in heritage but Prasa, [White] and the City really don’t care about that – it’s about commercialisation of the property and it’s through the detriment and the exclusion of the fishing community and locals who want to use those tidal pools,” Poggenpoel told Daily Maverick.

According to the chairman of the Kalk Bay and St James Residents and Ratepayers Association, Tony Trimmel, “the public amenity has been taken away from the public incrementally over the years and used for commercial purposes” and public attempts to thwart previous construction have been unsuccessful.

Back in December, 2012, Kalk Bay residents complained after White extended another deck onto the beach near the tidal pool in December 2012 without public participation.

Following an investigation by the provincial Department of Environmental Affairs and Development Planning which found that he had contravened the National Environmental Management Act (Nema) by building the decks, White was ordered to adjust the deck extensions in compliance with Nema, in 2013.

“The decks were never demolished and remain there to this day providing patrons with a very popular and well-loved amenity,” White told Daily Maverick.

Andrews said the City adopted a coastal by-law in 2020 which ensures the right of public access to the entire coastline and coastal amenities.

“The by-law is a more effective instrument to protect public rights than the original memorandum of agreement. The City protects public access to the tidal pools, shoreline and harbour area at Kalk Bay by enforcing the provisions of this by-law,” said Andrews, adding the Brass Bell had been “formally informed that should they prevent public access they will be served with a legal notice in terms of the Coastal by-law”.

Prasa had not responded to Daily Maverick’s queries at the time of publication. DM