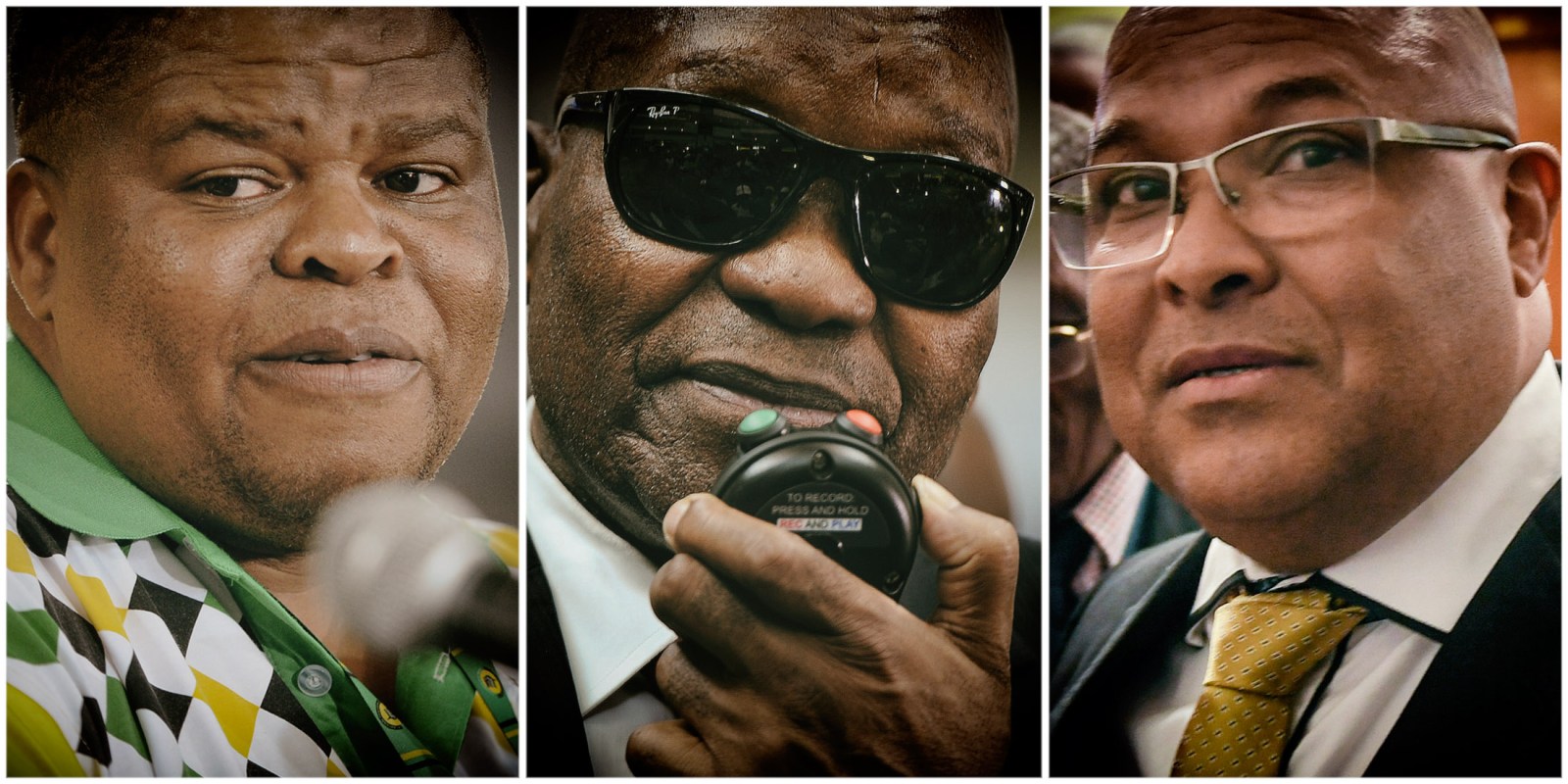 While South Africans wait for the delayed release of the final volume of the Zondo Commission report — which will include the capture of the State Security Agency — it is fitting to ponder the authoritarian dystopia that Zuma’s trusted spy chiefs imagined for South Africa.

This much is confirmed in the now partly declassified High-Level Review Panel into the State Security Agency (SSA), chaired by Sydney Mufamadi, now security adviser to President Cyril Ramaphosa.

It was a dream shared by former president Jacob Zuma, the erstwhile Number One, frequent medical tourist to Russia and accused in the Arms Deal matter which has taken more than a decade to even get going in court.

This country of the future would have been one where South Africans would be held in check by a covert intelligence service — answerable only to the president him/herself. 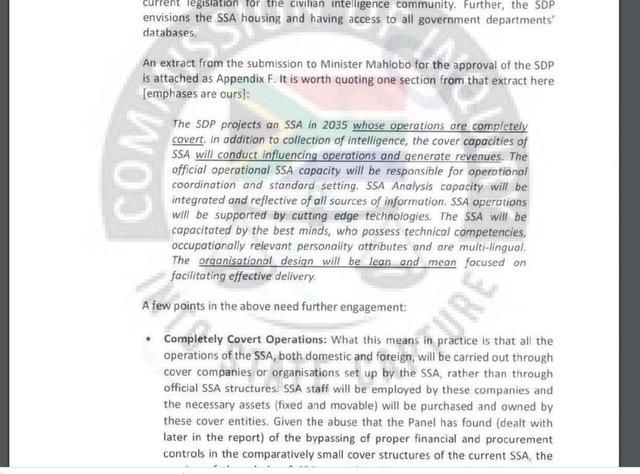 Former Minister of State Security, Bongani Bongo (2017-2018), essentially told the High-Level Review Panel that Dlomo was finally wheeled out of the SSA and shipped off to Japan as ambassador when Zuma felt Dlomo had, by 2017, created too many intelligence structures. Besides, the operations were attracting attention.

By the time Dlomo left, around R1.5-billion had been blown and Fraser and Mahlobo were in the driving seat.

In Vision 2035, compliance among the masses of South Africans would be achieved through “influence campaigns” — there would be active monitoring of “citizens” and NGOs through “cutting edge technology”, with the institution also capacitated “by the best minds” to oversee this bleak dystopia.

Keeping watch over our safety and security as a nation, this would be a privately funded agency. “Cover structures” would be created to top up the budget from the fiscus.

That was the project.

It was an ambitious and preposterous vision and Mahlobo, an acolyte of Russian president Vladimir Putin, approved newly appointed Director-General Arthur Fraser’s Strategic Development Plan with swift efficiency in March 2017. 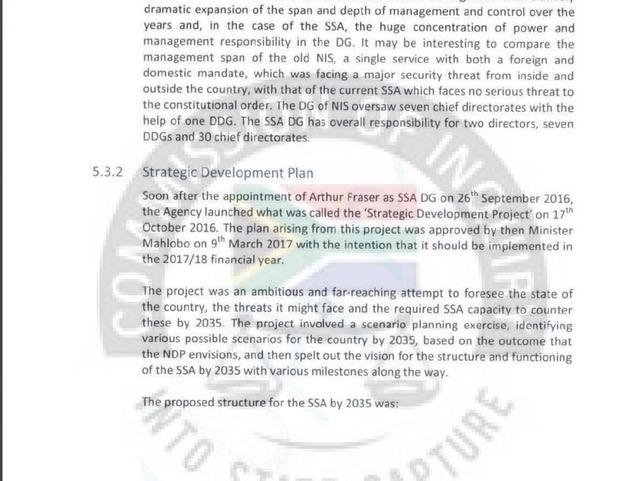 Fraser had been appointed in December 2016, by Jacob Zuma.

The intention was to move fast and implement wide-ranging changes in the 2017/18 financial year.

Let us pause here briefly at 2017: that watershed in so many ways.

At the time a statement by Rosatom’s director-general, Sergei Kirienko, said that former energy minister Tina Joemat-Pettersson had signed an agreement on South Africa’s behalf for Rosatom to build eight nuclear reactors in South Africa at a cost of R559-billion.

In 2014, Beeld newspaper obtained a copy of the agreement from the Energy Department using the Promotion of Access to Information Act.

When Joemat-Pettersson signed the deal in Vienna in 2014 at the International Atomic Energy Agency, the rest of the South African delegation was told to “wait somewhere else” as the matter with the Russians was “private”.

Zuma (and the Guptas and others who were rubbing their hands together in the wings) had hoped to push through the ruinous deal before his term of office ended in 2019. So had Putin.

A face-to-face nuclear deal between two mighty leaders, in private. What could go wrong?

The Constitution of the Republic of South Africa was what could go wrong. Well, at least in Zuma’s neck of the woods.

One of the goals of this agency was to house and have access to all government department databases.

The blueprint, or rather playbook, for Fraser and Mahlobo’s intelligence wet dream mimics Putin’s Presidential Security Service — an agency entirely consumed with protecting the president and prime minister of Russia.

The High-Level Review Panel found in 2018 that Fraser’s plan, with its wide mandate, was not “envisaged in the founding philosophy of intelligence policy, current legislation or even the Constitution”.

That anyone thought it could be privately funded was also, quite frankly, ridiculous, said the panel in not so many words.

In a tactical reshuffle back in October 2017, Zuma moved Mahlobo to another key position — that of Minister of Energy. At the time, his appointment was viewed as an attempt by the president to push through the nuclear deal. Bongo slipped into Mahlobo’s hot seat as Minister of State Security.

Testimony at the Zondo Commission places Mahlobo, Fraser and Zuma at the centre of State Capture.

Mahlobo has denied all allegations against him, including that he had heaps of cash delivered to him by spies to pass on to Zuma. He has also denied direct involvement with several tawdry rogue intelligence operations.

Mahlobo is alleged to have funnelled the cash to “No 1”, beginning with R2.5-million a month in 2015 and increasing to R4.5-million in 2016, the Zondo Commission heard.

Then Nasrec happened — Cyril Ramaphosa won the ANC leadership battle by the tiniest of margins.

The Zondo Commission’s last volume will not be pretty. Not for us and hopefully not for the likes of Mahlobo, Fraser and Zuma, who took the country to the brink of disaster.

Thankfully, the Constitution and the law held them (and other dystopian visions) in check. DM