South Africa left to languish as deadline for ending (o... 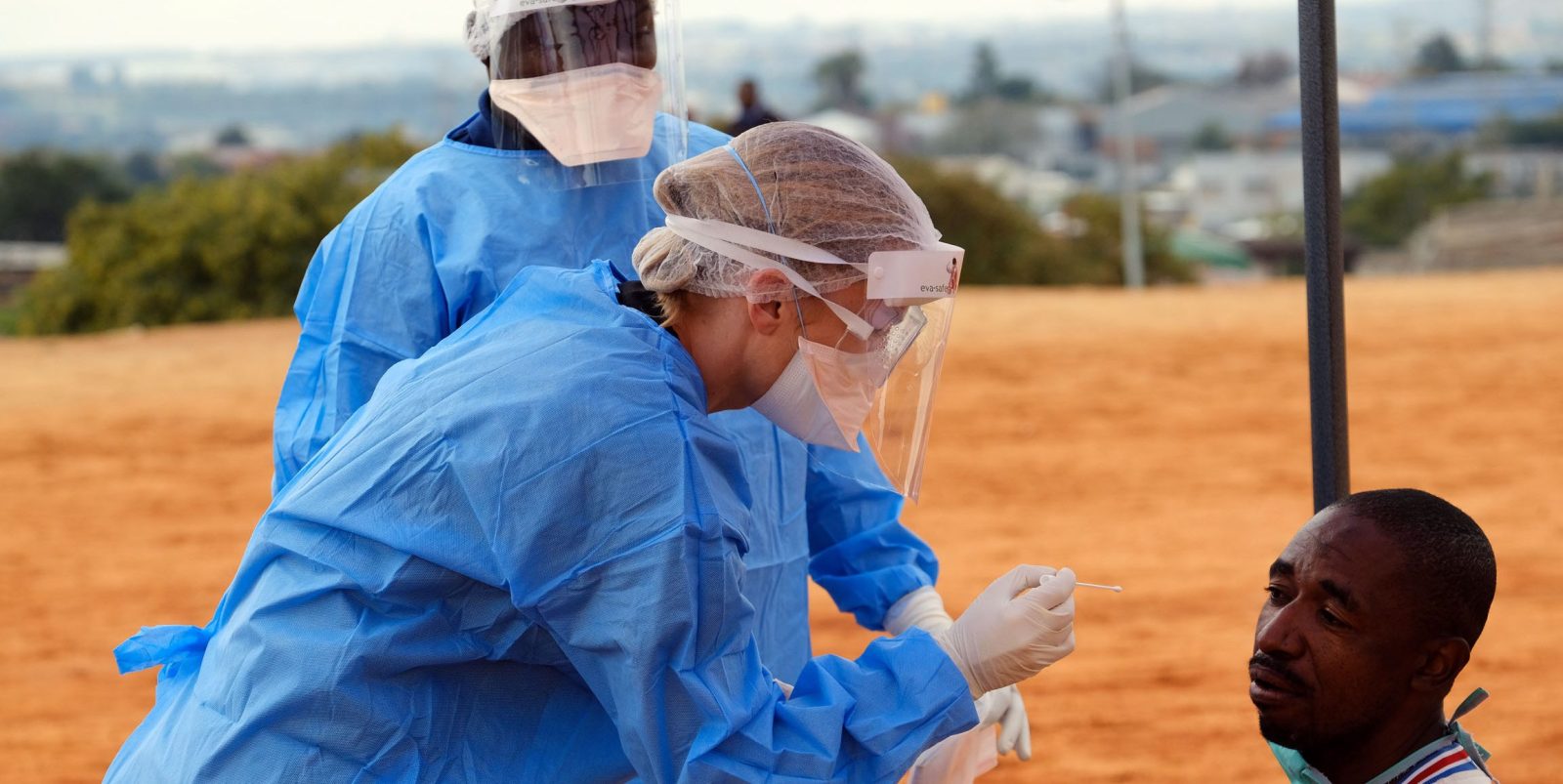 Health workers take a swab from with a community member on 25 April 2020 in Alexandra, South Africa. (Photo: Dino Lloyd)

As Tuesday’s deadline for the end – or the extension – of South Africa’s National State of Disaster looms, the Cabinet is yet to announce alternative regulations to manage Covid-19. Until such time, the country is still on Adjusted Alert Level 1 regulations, despite growing calls for them to be scrapped over concerns of economic recovery.

Agitation is growing as the government continues to be vague in providing details on the lifting of the National State of Disaster, which is scheduled for Tuesday, 15 March – marking two years since it was first declared in response to the pandemic.

On Thursday, the minister in the Presidency, Mondli Gungubele, held a post-Cabinet media briefing where he said that the government had “clear intentions to do away with the National State of Disaster”, but stated that in doing so there was a need for caution in order to ensure that no “vacuum” of legislation was left, regarding measures to manage Covid-19.

During the briefing, Gungubele held back on responding to queries of whether the National State of Disaster would be extended again or finally come to an end next week, and did not confirm if President Cyril Ramaphosa would be addressing the nation on the matter.

“[Covid-19] is so unpredictable. We must have means in case it comes at an unexpected time. I have no doubt that very soon there’ll be announcements as far as that is concerned,” said Gungubele.

Click on the link to read further the cabinet statement #postcabinetbrief

The Cabinet approved the “final extension” of the National State of Disaster on 9 February. Ramaphosa and Health Minister Joe Phaahla have both previously indicated that that extension would be the last, News24 reported.

Last Friday, Phaahla said the health department would propose new Covid-19 regulations, including amendments to travel requirements, before the National Coronavirus Command Council (NCCC) this week, which will in effect replace the regulations as set out in the National State of Disaster. However, Gungubele gave no indication on Thursday of whether this matter had been discussed by the Cabinet when it met on Wednesday.

Following Gungubele’s post-Cabinet briefing, the Southern Africa Tourism Services Association (Satsa) criticised the government’s “dithering” over the removal of the PCR test requirement for fully vaccinated inbound travellers, saying it is moving “at a glacial pace to lift a requirement that other countries have recognised is completely redundant”.

Under Adjusted Alert Level 1 regulations, international travellers to South Africa are required to produce a negative PCR test that is not older than 72 hours.

Satsa said the tourism sector had been lobbying the government for months to allow citizens and non-citizen travellers to enter South Africa provided they are fully vaccinated, while still requiring non-fully vaccinated travellers to provide a negative PCR test prior to their departure for the country.

“The health department confirmed last week that it would be presenting proposals to the NCCC which could, if approved, make it easier and cheaper to travel. Missing from the presentation was a definitive date when this would occur,” Satsa said.

“We have been left to languish for months with promises that the PCR test requirement for fully vaccinated travellers was being reviewed.

“Considering there is no scientific basis for this requirement in the first place, we find it unconscionable that government’s intransigence over this decision has widespread implications for the survival of tourism businesses and consequently the preservation and growth of jobs,” said Satsa’s CEO, David Frost.

The tourism association added that the PCR test requirement “remains one of the last impediments to travel to South Africa, based on cost, inconvenience and perceptions of uncertainty around travel postponement and cancellation, should just one member of a travel group test positive”.

The Tourism Business Council of South Africa (TBCSA) has also called for the government to urgently lift the PCR requirement for fully vaccinated travellers.

“If South Africa wants the tourism sector to recover faster, and to be competitive on the global stage, we need to urgently remove that PCR requirement to open the doors to tourists who want to come to South Africa,” TBCSA’s chief executive officer, Tshifhiwa Tshivhengwa told Daily Maverick.

Following calls to end the National State of Disaster earlier this year, the DA has also called for an end to all Covid-19 restrictions, “on the basis that they are doing more harm than good by restricting South Africa’s social and economic recovery”.

So what Covid-19 regulations are still in place?

DA leader John Steenhuisen has argued that South Africa has been slower than other countries in easing regulations.

“While the rest of the world has filled stadiums for sport and shows, in South Africa, the Soweto Derby had to take place in an empty stadium this weekend. Outdoor and indoor limits of 2,000 and 1,000 prevent the events industry from reviving,” he said.

On 31 January, the Cabinet approved changes to the Covid-19 regulations. Based on the trajectory of the pandemic, and the levels of vaccination in the country, the Cabinet announced the following amendments to Alert Level 1:

Earlier in January, a group of public health experts called on the government to implement extensive changes in the management of the pandemic, saying they saw “no reason” for the National State of Disaster to continue.

They argued that the government should end the National State of Disaster as “our current understanding of the science, the building of immunity protecting against severe Covid-19, and experience with policy renders most State of Disaster measures still in place unfit for purpose and requires tailoring of others”.

Since then, there has been more research, which has revealed that South Africa has entered a new phase of the pandemic – one requiring new measures to be implemented that will be most suited to this “recovery stage”.

The number of daily recorded Covid-19 cases has dropped steadily since the fourth wave peaked in December. South Africa recorded 1,868 new Covid-19 infections on Thursday, which represents a 6.5% positivity rate.

As of Thursday evening, the total number of laboratory-confirmed cases in the country stood at 3,690,291.

“Due to the ongoing audit exercise by the National Department of Health (NDoH), there may be a backlog of Covid-19 mortality cases reported,” said the National Institute for Communicable Diseases. On Thursday, the NDoH recorded 25 deaths, bringing the total fatalities to 99,681.

Most new Covid-19 cases were recorded in Gauteng, which accounted for 37% of new infections, followed by the Western Cape with 26% and KwaZulu-Natal with 15%.

As of Wednesday evening, 2,486 people were in public and private hospitals for Covid-19. According to the Department of Health, 32,332,691 doses of vaccine have been administered. Of those, 89,796 were administered on Wednesday.

As of Wednesday evening, a total of 17,176,000 adults in South Africa were fully vaccinated. DM