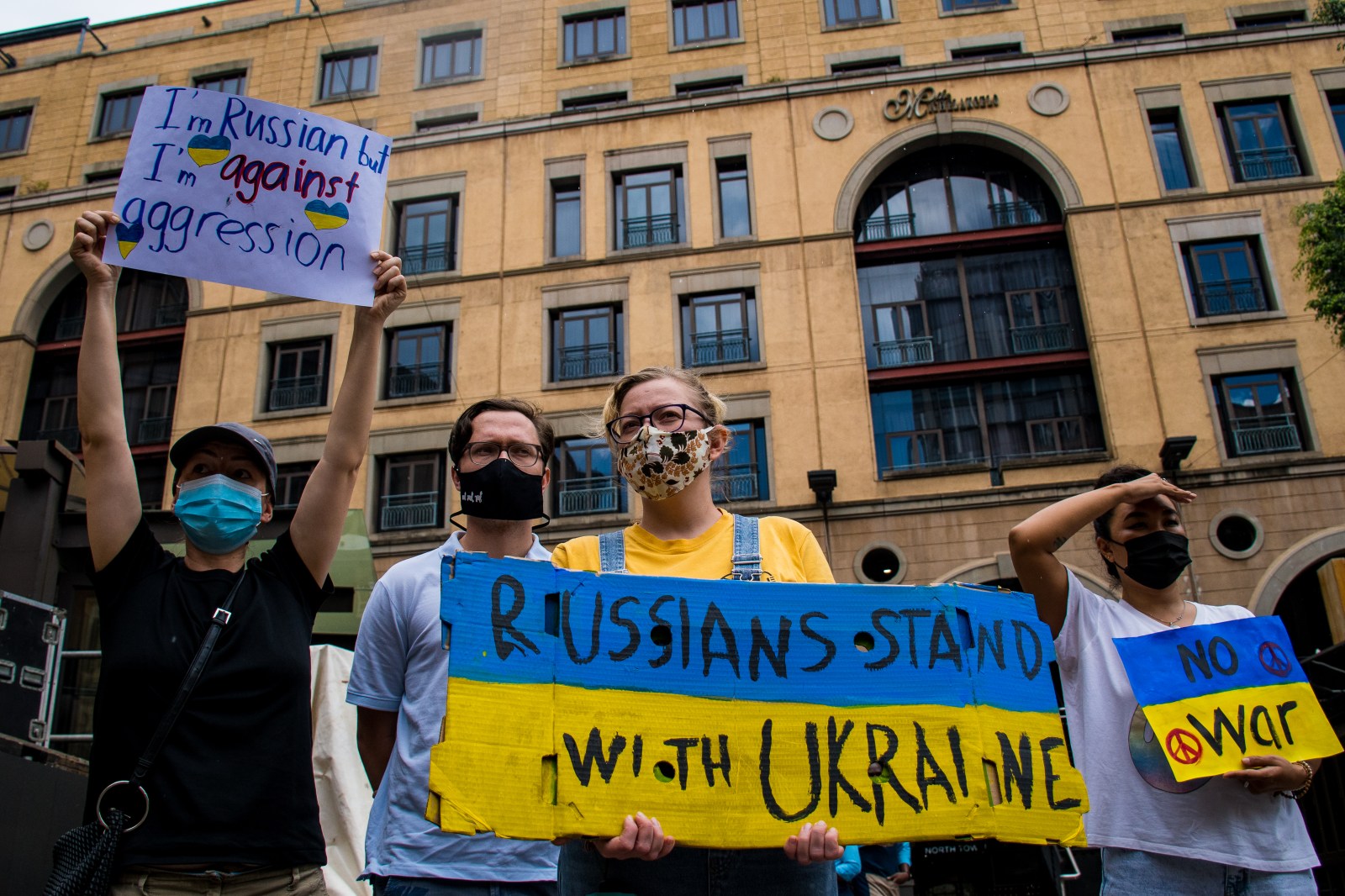 Russians, Ukrainians and other Europeans protested in Johannesburg on Sunday against Russia’s invasion of Ukraine. They denounced President Vladimir Putin’s decision to invade and called for peace.

“I’d just like to say, Russia is not Putin,” said Alexandra, a Russian citizen living in South Africa, at a demonstration on Sunday at Nelson Mandela Square in Johannesburg.

Alexandra, who wished not to disclose her surname, was holding a sign that read: “I am Russian, but I am against aggression.” Her sign echoed the stance of many Russians throughout the world – that Russian President Vladimir Putin’s decision to invade Ukraine is not a reflection of the Russian people.

In the early hours of Thursday, 24 February, Russia launched a broad military attack on Ukraine, which has led to one of the worst security crises in Europe since World War 2, global civil and government outcry, and mounting economic consequences.

Gabriele Vilyte, a Lithuanian citizen who attended the demonstration, said it made perfect sense for Russians to stand with Ukraine.

“I have lots of Russian friends,” explained Vilyte. “This war is not your normal citizens’ war. It is Putin’s and his government’s war. By no means are any of these protests against normal Russians. I mean, we can see now that Russians themselves are protesting.

“I think it’s essential to show our support as normal citizens so that our governments take action so that they cannot ignore this problem and this crisis,” said Vilyte, adding that as a neighbouring nation, Lithuania’s security and peace are also under threat.

Aleksei Oskolski, a Russian citizen who has lived in South Africa for seven years, told Daily Maverick: “We don’t see any reasonable justification for this war. As a citizen, I am responsible for my government… and I would like to show that I don’t support this war.”

Oskolski, a professor of botany at the University of Johannesburg, said he had joined thousands of his colleagues from Russia in signing an open letter that condemned Russian hostilities against the people of Ukraine.

To date, the letter has more than 4,000 signatures from Russian scientists and science journalists.

“I’m not thinking about politicians right now,” said Alina, a Russian citizen living in South Africa, who chose not to disclose her surname. “Not about my president, not about presidents of other countries. I think only about kids, women and older people and men. And that’s it. That is the thing that is really important.”

Alina believes in peaceful negotiations and doesn’t think this type of hostile intervention should be happening in the 21st century.

“We teach our children that we can solve each problem using words,” she said.

Oskolski said that his wife had organised the demonstration to show that Russians do not support this war and they were happy to see Ukrainians and other Europeans join them.

Olga Cheboksarova, from Ukraine, said she had turned up to support her family members who live in Ukraine and are at the front line of the aggression of Putin and the Russian Federation.

“I also want to show the people of Ukraine and Russia that, you know what, being Ukrainian, or being Russian, we are against aggression. We are together in it.

“We are brother nations – you can’t separate us,” said Cheboksarova, explaining that her father is Russian and her mother is Ukrainian.

“So how am I supposed to split [myself], who am I supposed to support?” she asked, adding that the only thing she is supporting now is being against the aggression and violence her family members face in Ukraine.

“Russians, Ukrainians, South Africans – we believe in peace, all of us.”

Olga Viunova, from Ukraine, had similar opinions, telling Daily Maverick that she had relatives in Russia, and knows not all Russian people want to be involved in this war, especially because of the severe economic fallout.

Viunova, who came to South Africa eight years ago during the Russian-backed conflict in Ukraine’s east, said that Putin had been wanting their land for a long time and this invasion was expected.

Vilyte, from Lithuania, agreed, saying: “I think Putin for years has had ambitions in Europe. And I don’t think he has ever really accepted the defeat of the Soviet Union.

“I think it would be naive to think that this crisis doesn’t affect all of us, even in South Africa.”

Nick Dashko, a Ukrainian citizen who has been living in South Africa for 12 years, brought his wife and two children to the demonstration.

Dashko said that they felt that joining the demonstration was a small way they could show their solidarity and help their relatives and friends back home.

“We decided that at least we’ll stand here together with the people, whether they’re Ukrainian or Russian or whoever else,” said Dashko at the protest.

Asked about the Russian people’s support of Putin’s decision to invade, Dashko said, “What we understand, from the people that are basically involved on the front end, is that there is no real morale from the Russian side to go and fight Ukrainians.

“We just hope that this will end soon. Because, every day, every hour, there is life loss – lives lost on both sides.

“And unfortunately, one side knows for sure what we’re fighting for, the other not so much. That’s even more tragic.” DM