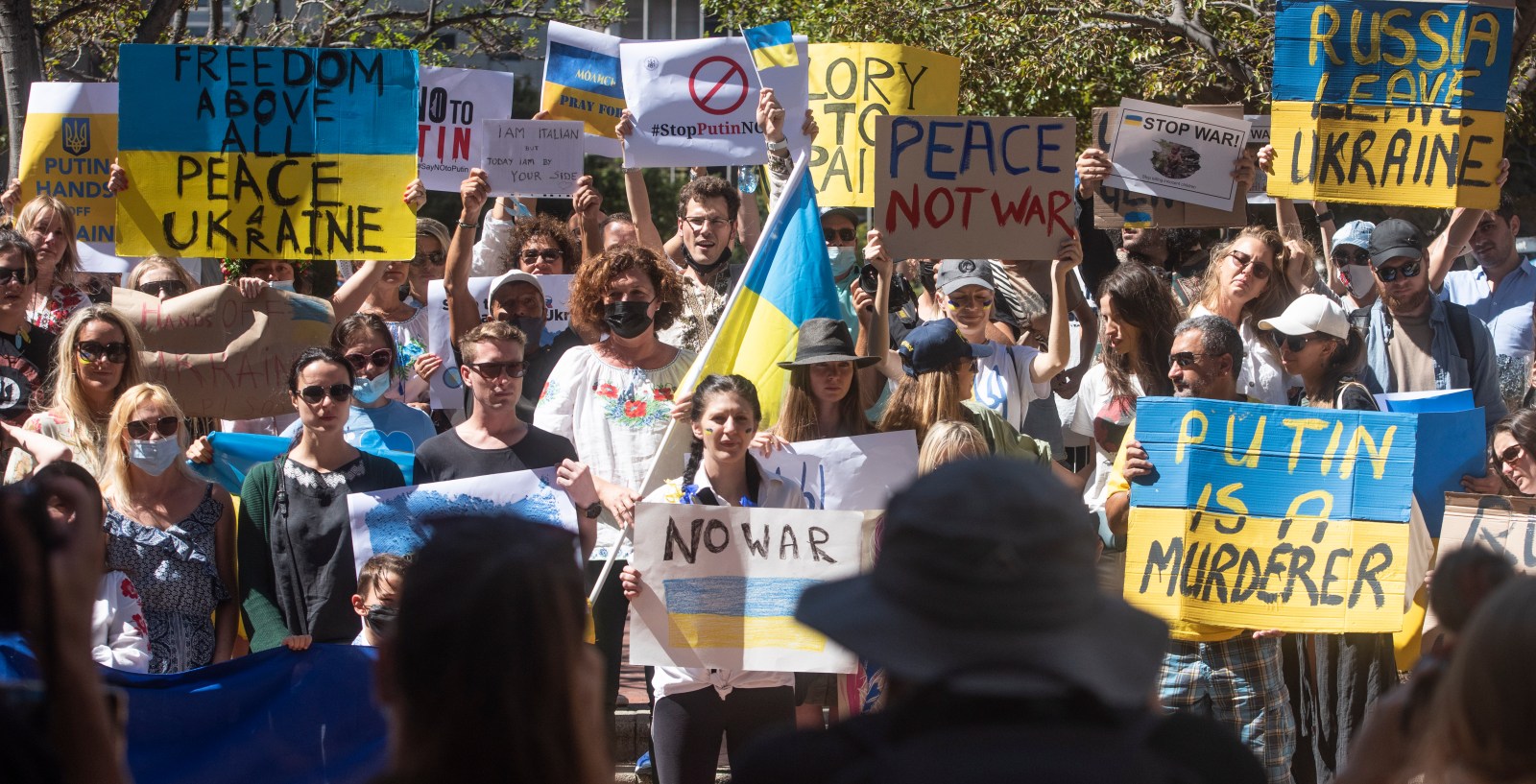 Dozens of people gathered outside the Russian Consulate in Cape Town on Friday to protest against Russia’s invasion of Ukraine.

Those were the emotions that had driven protesters, many of whom are Ukrainian expats living in Cape Town with loved ones in Ukraine, to demonstrate outside the Russian Consulate on Friday afternoon.

Amid many muffled cries, there was a remarkable undertone of strength to the voices of the crowd. “Stop war, stop Putin,” rang the staccato chant of the protesters on the Thibault Square Plaza in front of the consulate.

After months of escalating tensions, Russia launched a broad military attack on Ukraine in the early hours of Thursday morning, 24 February.

Since the invasion began, protests in response to Russia’s invasion have broken out in multiple countries around the world, including in Japan, Sweden, India, Turkey, the US and the UK. The protest in Cape Town was organised by the Ukrainian Association of South Africa (UAZA), which has called on South Africa and the international community to stop Russia’s attack on Ukraine. Daily Maverick spoke to protesters about their feelings.

Yana Semenyuk felt compelled to participate in the demonstration. It was her way of showing support for her country, and doing what she could to bring awareness to the plight of Ukrainians.

Standing on the edges of the gathering, she held a sign which read, “Freedom above all. Peace for Ukraine”. Wearing an intricately embroidered dress and a flower crown, she said her outfit was part of traditional Ukrainian custom.

Semenyuk grew up in central Ukraine, but has spent the past eight years living in Cape Town. She told Daily Maverick that she still has many friends and family in Ukraine, who now reside in the western part of the country.

“I feel so displaced because I’m here, but my people are there,” she said. “I cannot be there now, so the least I can do is be here, and bring awareness.”

Despite living in fear of attack, Semenyuk said her family were not yet considering leaving. “My uncle joined the resistance, and my family are getting first aid training,” she said.

While Semenyuk understood the fear that would ultimately drive many people to leave, she said that the Ukrainian president has encouraged those who are there to assist where they can.

“Our president has said, ‘help is what you can do’. Yes, lots of people want to leave Ukraine because they are afraid for their families. But people who can fight, they stay. And that’s how it’s supposed to be,” she said.

Olga Torovik has been living in South Africa for three years, but her parents — who are both over the age of 60 — live in Kharkiv, in north-eastern Ukraine. Her mother is a pharmacist and her father works in security. Neither of them is ready to leave.

“They’re trying not to panic, because panicking is the worst thing you can do. But it’s hard to handle. Your world has changed in an instant,” said Torovik.

Torovik said there are many people leaving the country “who have opportunities, who have cars, who have money”, but some are not as lucky.

“It’s devastating to think that people back home are suffering, and I don’t believe all Russians want that. It’s one person. He has supporters, of course, but I don’t believe that the whole of Russia wants this war,” said Torovik.

Torovik said she was “devastated” and “heartbroken” at the thought of her country being at war.

“We were prepared that it was going to happen but, of course, we had hoped that it would not,” she added.

For the past two days, Valeriya Korytska has been meeting with other Ukrainians in Cape Town, to share updates and news from their families and friends back home.

“We sit there, together, and try to share in the pain and hopes. Obviously we’re all devastated, and nobody can actually believe that this has happened,” said Korytska.

Echoing the words of others, Korytska said that showing her support by attending Friday’s protest was one of the few ways she believed she could help.

Speaking through tears, Korytska said she was “proud” of her family, and the families of others who had “refused to leave Ukraine when they were asked if they wanted to come to South Africa for safety”.

UAZA honourary president, Dzvinka Kachur, said that the organisation had called on the South African and international community to stop Russia’s war against Ukraine, “against international principles of sovereignty and territorial integrity”.

Kachur, an op-ed contributor to Daily Maverick, said it was “devastating” to be in South Africa while her family faced Russian tanks and bombs in Kyiv.

“[On Thursday] morning the bombing started, and they heard the explosions. But they decided to remain [there]… I think the spirit inside Ukraine is quite strong,” she said.

On Thursday, the South African government broke its silence on the crisis and came out strongly against the escalation of the conflict, calling on Russia to “immediately” withdraw its forces from Ukraine.

Read in the Daily Maverick: Pretoria calls on Russia to withdraw from Ukraine

“Armed conflict will no doubt result in human suffering and destruction, the effects of which will not only affect Ukraine but also reverberate across the world. No country is immune to the effects of this conflict.

“South Africa calls on Russia to immediately withdraw its forces from Ukraine in line with the United Nations Charter, which enjoins all member states to settle their international disputes by peaceful means in such a manner that international peace and security, and justice are not endangered,” the Department of International Relations and Cooperation (Dirco) said.

However, Kachur said more needs to be done to assist Ukrainians. The Ukrainian association has called on the South African government to: