Varsities bounce back to life on campus, but a blended system in place – with new challenges 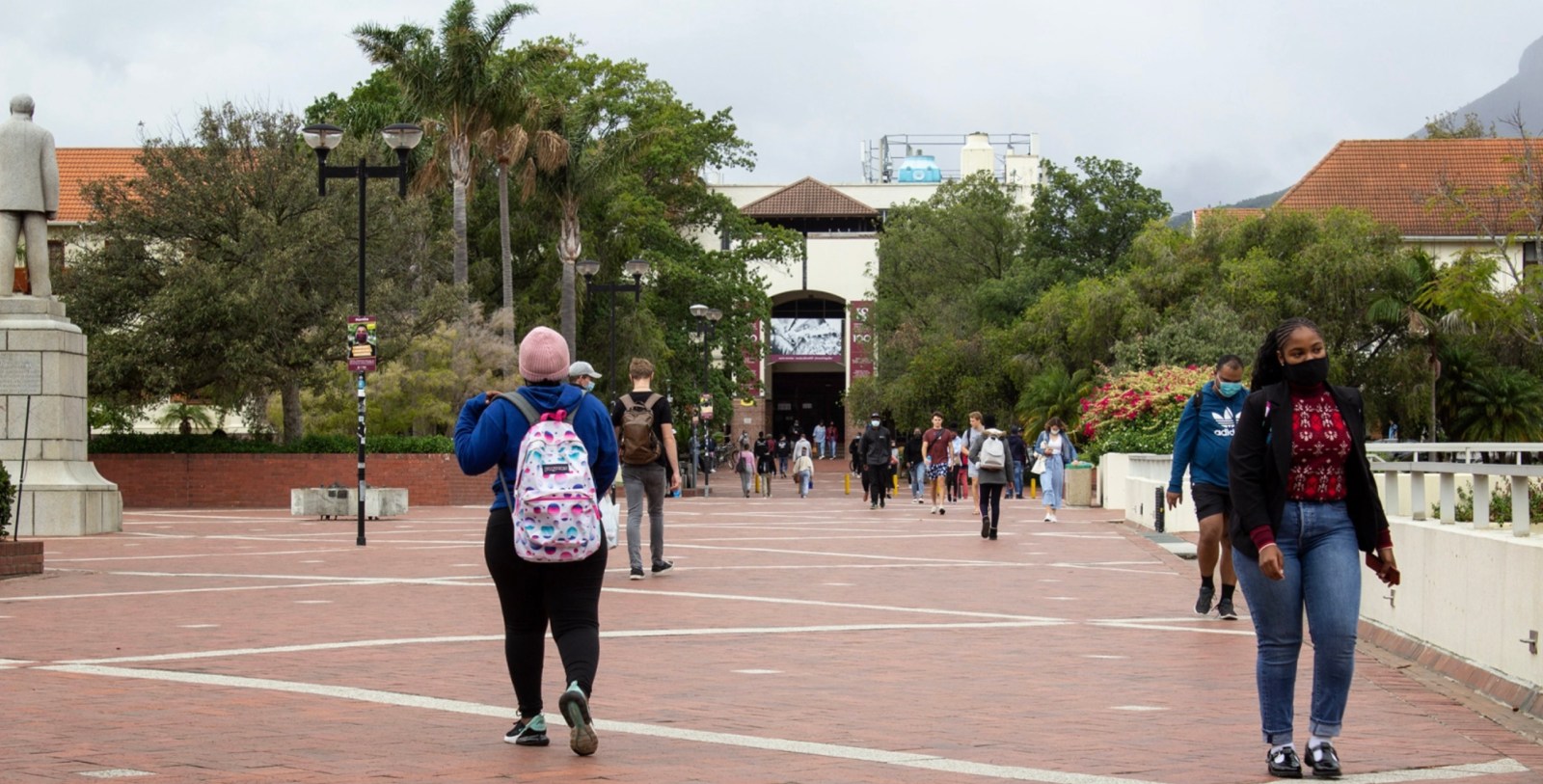 Although not a full-return, universities are now welcoming the return of more in-person learning. (Photo: Rebecca Pitt)

University undergraduates face a combination of blended learning and face-to-face lectures, with many anticipating teething problems.

Universities opened for the start of the 2022 academic year this week, but unlike schools, they will not bounce back full-time.

Approximately 1,100,000 university students began their academic year on 14 February, with some students returning to campus for the first time after two years of disruptions under Covid-19.

Unlike school learners, these university students are not making a full return to campus.

Instead, campuses continue hybrid modes of learning and teaching, which involve blended online and face-to-face lectures.

Schools fully reopened on 7 February after Cabinet dropped the rotational timetable, as well as the one-metre physical distance rule for schools. The full return at schools was a response to the “crisis of learning” the schooling system is under, announced Basic Education Minister Angie Motshekga on 6 February.

This move was to prevent added disruptions in schools, Motshekga said.

Universities, however, are in a different boat, as the Department of Higher Education and Training (DHET) has not yet lifted regulations that govern university operations.

National legislation states that only 50% of venues can be occupied, with the 1.5-metre requisite of physical distancing.

This means that most universities can only accommodate half or fewer of the students that venues would normally have the capacity for.

Universities are still awaiting guidelines from the DHET and do not know whether amendments will be made, said Zandile Mbabela, spokesperson at Nelson Mandela University (NMU).

“It’s simply not possible to provide all students in all modules with mask-to-mask learning experiences while meeting the physical distancing requirement,” Mbabela said.

The decision for full return, as Stellenbosch University (SU) spokesperson Martin Viljoen put it, “is not in the university’s hands”.

According to Dr Linda Meyer, the head of operations at Universities South Africa (USAf), the brunt of the pandemic has affected the way universities function.

It is unlikely that they will function the same again.

“We will not return to what we have come to accept as the pre-Covid-19 norm in higher education. Covid-19 has been challenging for universities, and disruption (of some sort) to the academic programme will likely persist for the medium term,” Meyer said.

Universities are implementing multiple approaches in their learning and teaching strategies, which include bringing back all or some of their students, remote learning, platoon systems, blended learning or a combination of these.

Although still constrained, universities have attempted to allow for a greater return of students during 2022, such as holding multiple lectures for one class.

The University of Cape Town (UCT) has got permission to start a pilot programme that allows for the reduction of required physical distance between individuals, said Nombuso Shabalala, spokesperson for UCT. This, “while keeping the obligation to wear masks and the … use of sanitisers and cleaning of venues in place”, Shabalala said.

But it has not been a smooth start of what Shabalala called a “significant new year”. A student protest over registration issues disrupted classes and barred entryways at UCT on 16 February, two days after classes commenced.

Despite some disruptive starts to the academic year, campuses show indications of students’ return.

According to Meyer, a perceived lowering of universities’ standards of content delivery and assessment constructs are some of the challenges that are raised under the new way of learning.

“Some voices have questioned the validity of students who have, during this period, not been assessed in physical invigilated environments in traditional high-stakes summative assessments,” said Meyer. But, “we must accept that … Covid-19 has … impacted education and historic[al] delivery constructs”.

“The Covid-19 pandemic accelerated the use of technology, and universities have invested significant resources to advance quality and assessment security,” said Meyer.

For SU student Gregan Verhoog, in-person learning is “way more effective”. Verhoog had just come out of a class where “most students couldn’t hear anything”.

Still, Verhoog said, blended learning was better than nothing — he was happy to settle.

According to Nikhiel Pillay, a student at the University of the Western Cape, most of his friends are eager to return to campus, although he preferred online lectures.

Students prefer in-person classes because of the interaction, SU student Heleen Rossouw told DM168 while she waited for an isiXhosa lecture.

Rossouw had come to the university occasionally last year. “It was very quiet. I’m used to campus swarming with students — it was so alive,” she said. But now, “it is like the old Stellenbosch that Covid took away”.

Some of the pre-Covid-like activity is due to students returning in full to residences around the town. SU student Andiswe Sikhumba said that by the time she got to university, she couldn’t find accommodation.

According to Lacea Loader, spokesperson for the University of the Free State, “it remains important that our students experience an on-campus student life and that staff and students can learn, work and socialise in a way that minimises risk”.

Student activity is increasing at the University of the Witwatersrand (Wits) as well, where students “must have accommodation close enough to Wits so that they can come to campus regularly”, said Professor Diane Grayson, senior director of academic affairs at the university.

Universities are also trying to offer as much in-person teaching where possible.

At NMU, more than 55% of NMU programmes are on-campus masked activities, said Mbabela.

Likewise, “the majority of [Wits] students will return to campus and in-person teaching and learning”, said Grayson.

At Sol Plaatje University, each module has a small-group in-person engagement that is compulsory, said Kashini Maistry, spokesperson at the university.

Viljoen said that once the regulations were amended, as hoped, the mode of teaching and learning would adjust. DM168