UCT students shut down campus over registration and out... 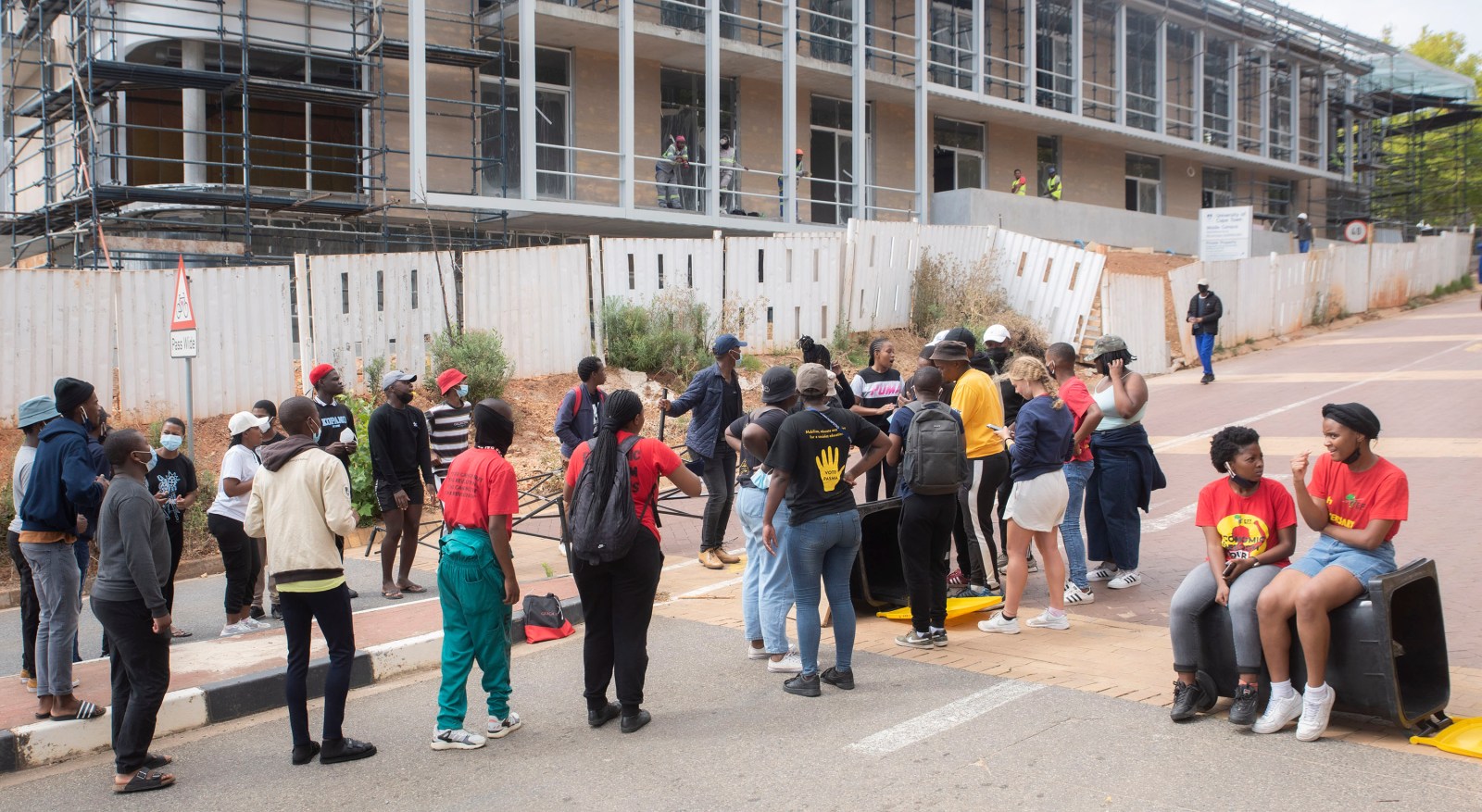 The road to Middle Campus was closed, as were all the other entrances to UCT, by students and members of the SRC on 16 February 2022. (Photo: Brenton Geach)

University of Cape Town online and face-to-face classes were disrupted on Wednesday when students shut down the campus over registration and outstanding fee debt issues. The shutdown comes two days into the start of the academic year.

Protests broke out at the University of Cape Town (UCT) on Wednesday morning when students disrupted classes and barricaded campus entrances over issues of fee blocks and student registration woes. The shutdown came as hundreds of student registrations were still being processed.

In an open letter to Vice-Chancellor Professor Mamokgethi Phakeng on Tuesday, 15 February, the UCT Students’ Representative Council (SRC) said the university had failed to commit to ensuring that all students were registered by Monday, 14 February.

The disruptions began last Friday, when the SRC shut down campus –  blocking access roads, and protesting at the fees office in the Kramer Law Building, over the exclusion of students who have outstanding fee debt and in response to what they called “the lack of urgency” by the university to address fee blocks.

Following Friday’s protests, the SRC met with university management on Saturday, 12 February, where they requested a postponement of the academic year until all students were registered and fee blocks had been resolved. This proposal was rejected.

“We had a meeting on 12 February with management of the university where they asked us to stand down and not continue with the shutdown as we had planned, with the commitment that they would have students registered, or allow those with registration issues access to academic material,” UCT SRC acting president Siya Plaatjie told Daily Maverick.

The SRC agreed to suspend the shutdown based on the UCT’s commitment to ensure all students were registered by Monday, said Plaatjie.

However, Plaatjie said that on Monday and Tuesday the SRC had been “inundated with emails from students complaining about being left behind because they were being denied access to their course material, and some of them still had pending registration issues”.

As a result, students took to campus on Wednesday “to hold up the academic proceedings of the university until such a time when students with registration issues can access course material”, said Plaatjie.

On Wednesday morning, access to UCT’s upper, middle and lower campus was blocked by pockets of students, who could be heard chanting: “UCT leadership must fall”. Dustbins and placards blocked the entrance to UCT’s Cross Campus Road from Woolsack Drive, as well as the entrance to Baxter Road from Chapel Road.

At 8.51am, UCT announced that the university’s shuttle service had been temporarily suspended due to the disruptions.

Despite the disruptions, UCT media liaison Nombuso Shabalala told Daily Maverick that “online and face-to-face classes had not been cancelled”. However, speaking to students on campus it was apparent that some lecturers had decided to cancel face-to-face lectures for the day, while others had simply pivoted to online classes.

Speaking to Daily Maverick on the campus, a student, who wished to remain anonymous, said that his 8am on-campus lecture had ended early when SRC members disrupted the class. There were also reports on Twitter from students whose online Microsoft Teams lectures were disrupted by protesters.

In a statement released on Wednesday morning, Vice-Chancellor Phakeng called on the SRC to “refrain from blocking access to campus and interrupting services with immediate effect”, and to work with management “in the interest of all students”.

She added that the university was actively addressing the issues raised by the SRC.

“It is deeply disappointing that, this morning, the SRC has chosen to interfere with access control and the UCT shuttle service, disrupting some aspects of the academic programme. It is regrettable that, because of these interruptions, a number of students were prevented from access to classes and other facilities,” said Phakeng.

She said that the university management had been in communication with the SRC for the past few days regarding updates on the progress in completing the registration process for the 2022 academic year.

“We have explained that the delays in completing registration have been caused by a number of factors, including the unprecedented numbers of students seeking personal curriculum advice after the disruptions of the past two years, and the need for students to provide outstanding information that is required for their registrations to be completed.

“We have asked each faculty to ensure that access to Vula is open to all students, whether or not their registration is complete, so that they are not disadvantaged,” said Phakeng.

As of Wednesday, 16 February, a total of 512 student registrations were still being processed, said Phakeng. Of these, 122 were new submissions, so delayed registration cases still outstanding amounted to 441.

“Many of these outstanding registrations will be complete by the end of today,” said Phakeng.

The vice-chancellor also addressed the issue of fee blocks, saying: “The threshold for the fee block for students with outstanding debt has been raised from R1,000 to R10,000, and the grace period for appeals against exclusion for fee debt has been extended to 31 March.

“While not ideal, we believe that we have made good progress towards registering all students who have supplied us with all required information.”

Commenting on the vice-chancellor’s statement, Plaatjie said that while the SRC welcomed the registration of these students, students “should not have to protest in order for [the university] to register students”.

Despite the vice-chancellor’s announcement regarding registrations and fee blocks, the SRC is “calling for all classes to be put on hold until such time that all students are registered and the issue of fee blocks is appropriately addressed”, added Plaatjie.

In response to the SRC’s demands, on Friday the UCT Chair of Council agreed to call a Special Meeting of Council with the SRC on 21 February, to reconsider the current fee debt policies.

Plaatjie said that the SRC was requesting “that the academic calendar and academic proceedings be postponed until this meeting”.

Student registration woes are a recurring issue at the beginning of every academic year. The start of the 2021 academic year was marked by protests at higher education institutions across South Africa against issues of financial exclusion and student historical debt.

Speaking to Daily Maverick about these long-standing issues that continue to plague universities, Plaatjie said it is “tiring” fighting continually for the same issue to be resolved.

“Hence, why, above our requests for fee blocks to be lifted, we are also asking for the university to start coming up with sustainable models that can help students clear their historical debt, so that we cannot run into this issue of fee blocks year in, year out,” said Plaatjie. DM