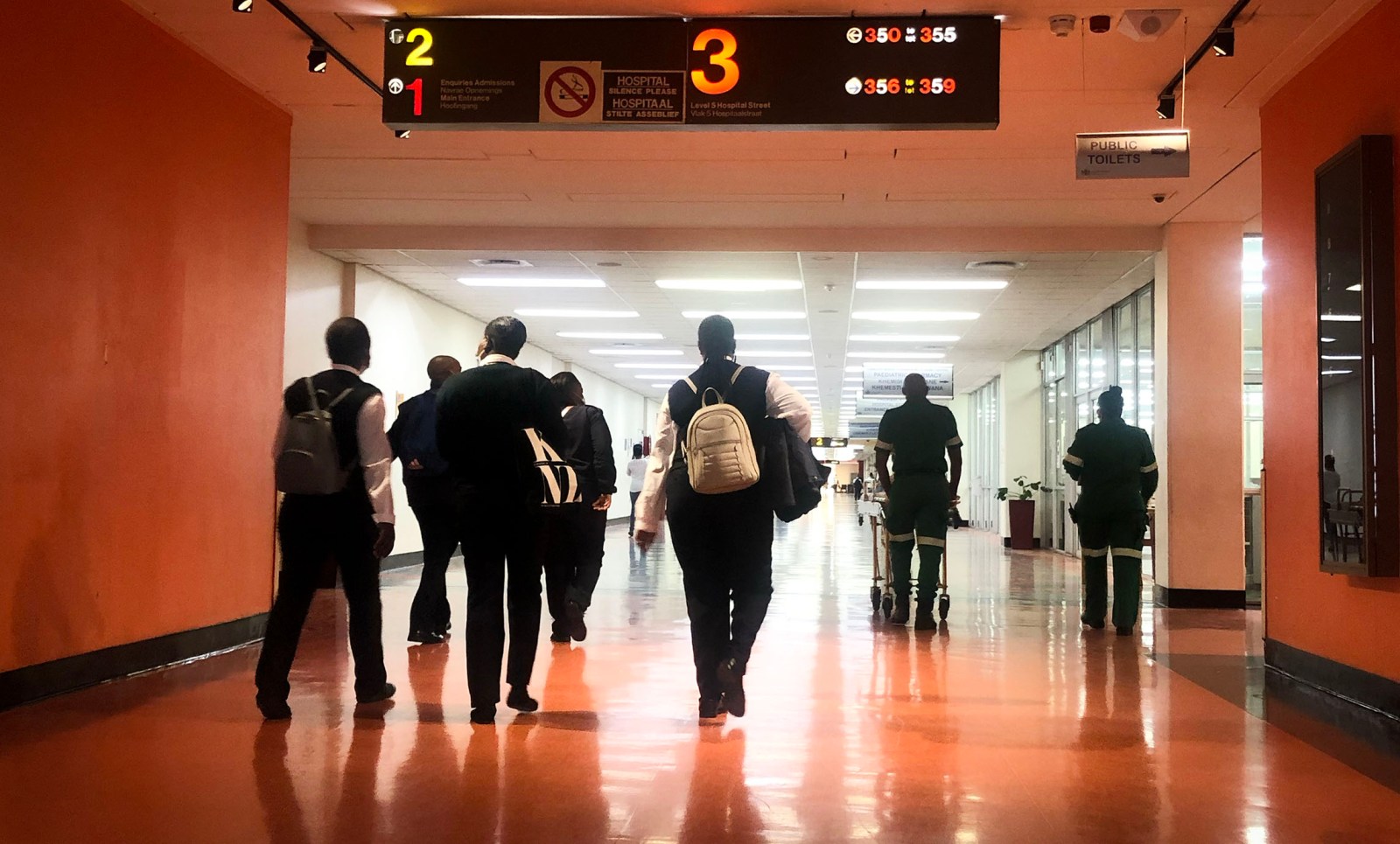 Security guards and paramedics walk down a passage in Charlotte Maxeke hospital in Johannesburg on 15 February 2022. (Photo: Shiraaz Mohamed)

The aim is to get Charlotte Maxeke fully operational by 2023. Can staff and patients hang on till then?

It’s been 10 months of stuttering progress, missed deadlines, throttled communication and no real answers as to why the Gauteng provincial government has been unable to get the Charlotte Maxeke Johannesburg Academic Hospital fully reopened after a fire in April last year. And now the government has put it down to a “disagreement” between the Gauteng departments of health and infrastructure, and development.

“The two departments were not able to agree on the scope or the budget and I had to step in and mediate from the Office of the Premier in December,” said acting Director-General Thabo Masebe at a media briefing at the hospital on 17 February.

Part of the hospital was gutted by a fire in April 2021 and nine wards had to be closed. Despite the loss of a major part of this crucial healthcare facility, the proclamation to transfer the hospital to the sole management of the Department of Health, away from the Department of Infrastructure, was only gazetted on 9 February. The oversight for the rebuilding will now fall under national structures, with Ayanda Dakela, head of infrastructure at the National Department of Health, in the hot seat.

Dakela’s timeline for a full return to services stretches until the end of 2023. He considers this a “fast-tracked” timeline, because the work was initially scheduled to be finished in 2027, he said. But the continued shutdown of services and functioning at the specialist academic hospital has been a crisis for patients, staff, trainee doctors and health workers from Gauteng and surrounding provinces.

At the media briefing, it was clear that the hospital’s management was still fumbling. The briefing was delayed by 90 minutes as the officials met separately, and then an electricity feed problem forced a venue change. Outside the hospital, the roads were congested with double-parked cars because staff have nowhere to park and no alternative has been arranged.

The officials could not give a budget for the remedial work. Masebe said that the numbers would become clearer once Dakela’s team undertook damage assessments with the Development Bank of Southern Africa, which will help to fund the project.

But experts say these engineering assessments should have been done immediately after the fire. The hospital’s university partners, donors and non-governmental organisations, which have been wanting to step in since the start of the crisis, have called for the assessments to be done as a matter of urgency.

Dr Imtiaz Sooliman, the founder of disaster response charity Gift of the Givers, called a structural assessment an essential “template” that allows companies and people to understand where and how they can help.

The organisation reached out with offers to help in the early days after the fire, but Sooliman said conversations simply went silent “and this dragged on for the whole year”.

Gift of the Givers has finally received a memorandum of understanding for work at the site, starting with the structural assessments. Sooliman said their proviso was that no money would be handed over to the government and that the government would not interfere with the appointment of contractors.

“I have made it clear that I have met with the Special Investigating Unit and will not hesitate to pass on any information about corrupt practices that we come across on this project at Charlotte Maxeke,” he said.

Gift of the Givers has a track record in building and equipping hospitals in record time and of not wasting resources or bowing to political whims.

The announcement does not erase the multiple failings of government departments in Gauteng. Questions remain over why and how the fire broke out in the first place, and why it could not be contained. It speaks to the status of the building’s fire safety compliance even before the April blaze and a terrible slide into neglect – both at the hospital and the country’s healthcare system.

There has been dismal leadership, an absence of accountability and a lack of communication about a proper plan of action, not just for the rebuilding but also for patient management.

Questions also remain about bills being racked up. This includes an alleged R8-million a month, according to a hospital insider, being paid to companies appointed by the Department of Infrastructure to secure and prop up damaged sections of the hospital, even though construction has been in limbo.

Corruption allegations continue to swirl across departments of the provincial government. They come off the back of the Special Investigating Unit’s (SIU’s) work that led to the suspensions a week ago of nine senior officials from the departments of infrastructure and development, and health. The SIU’s investigations were in connection with R500-million meant to be spent to upgrade the donated AngloGold Ashanti Hospital to a 181-bed Covid-19 hospital. The hospital never opened.

There still needs to be accountability over reports of contractors who are working on projects funded by the Solidarity Fund’s R68-million injection at Charlotte Maxeke’s Block 1 being threatened and intimidated. They allegedly took away contracts and tenders from those who usually land government deals easily.

When questioned at the media briefing about corruption and compliance failures, Masebe deflected these matters to other agencies – from the police and the City of Johannesburg to the SIU. “We cannot be investigating ourselves… we are also eagerly awaiting their reports,” he said.

He said that they “were not hiding from the media’s questions”, even though questions to all the province’s departments routinely go unanswered. The frustrating 10-month impasse has come at the cost of patient care. There are concerns that there are cancer patients who have been sent home to die or have simply fallen through the cracks.

Doctors, nurses and other healthcare workers, already under enormous pressure from steering South Africa through two years of the Covid-19 pandemic, have exited the public health sector.

This personnel and patient loss was confirmed by the hospital’s CEO, Gladys Bogoshi. She acknowledged that they had not been able to reach all the patients lost to care since the fire. She could also not quantify staff attrition but admitted that the dual burdens of Covid-19 and the fire had taken a toll.

This has had an impact on facilities such as Chris Hani Baragwanath Hospital and Helen Joseph Hospital, which is geographically closest to Charlotte Maxeke.

Dr Jeremy Nel, the head of the Infectious Diseases division at Helen Joseph Hospital, said that during the week of the fire the number of people needing a bed shot up from an average of about 10 a day to between 50 and 70.

“It means people are waiting on benches and chairs. They are seen by doctors there; they have their meals there and get their medicine there. There isn’t a lot of privacy and people are on top of each other.”

Nel said that there had been a noticeable influx of trauma patients and psychiatric patients.

Nel said the delayed reopening of Charlotte Maxeke’s casualty ward, which has now been set down for the middle of March, would alleviate only part of the strain.

“The current situation at Helen Joseph is unsolvable at this level. The problem can only be solved once all the wards at Charlotte Maxeke are fully opened. If that isn’t going to happen soon then the province must find alternative arrangements, including for the psychiatric patients that are swamping Helen Joseph,” he said.

“This kind of long-term neglect and this long delay with nothing to show for progress is incredibly damaging to staff morale and has impacts also for student training that will result in bottlenecks,” he said.

Professor Adam Mahomed, head of the internal medicine department at Charlotte Maxeke Academic Hospital, said there is no sugar-coating the situation that will continue even if this February plan of action plays out.

“The Auditor-General needs to explain the Department of Infrastructure’s budget to us and how the money has been spent over these past few years. Also, the Public Protector needs to respond. She asked me to put everything in writing, which I did but I’ve heard nothing back,” he said.

Mahomed said the delays and excuses were another indication that healthcare for the poorest of patients who rely on public facilities is a low priority for the government.

“We have been saying to government that if they are not willing to do the work then they should hand over the fixing of the hospital to the doctors – not even hospital management – and well-run, well-resourced organisations that have proven themselves… government must just step back and not tie anyone’s hands with bureaucracy and illegal tenders.” DM168