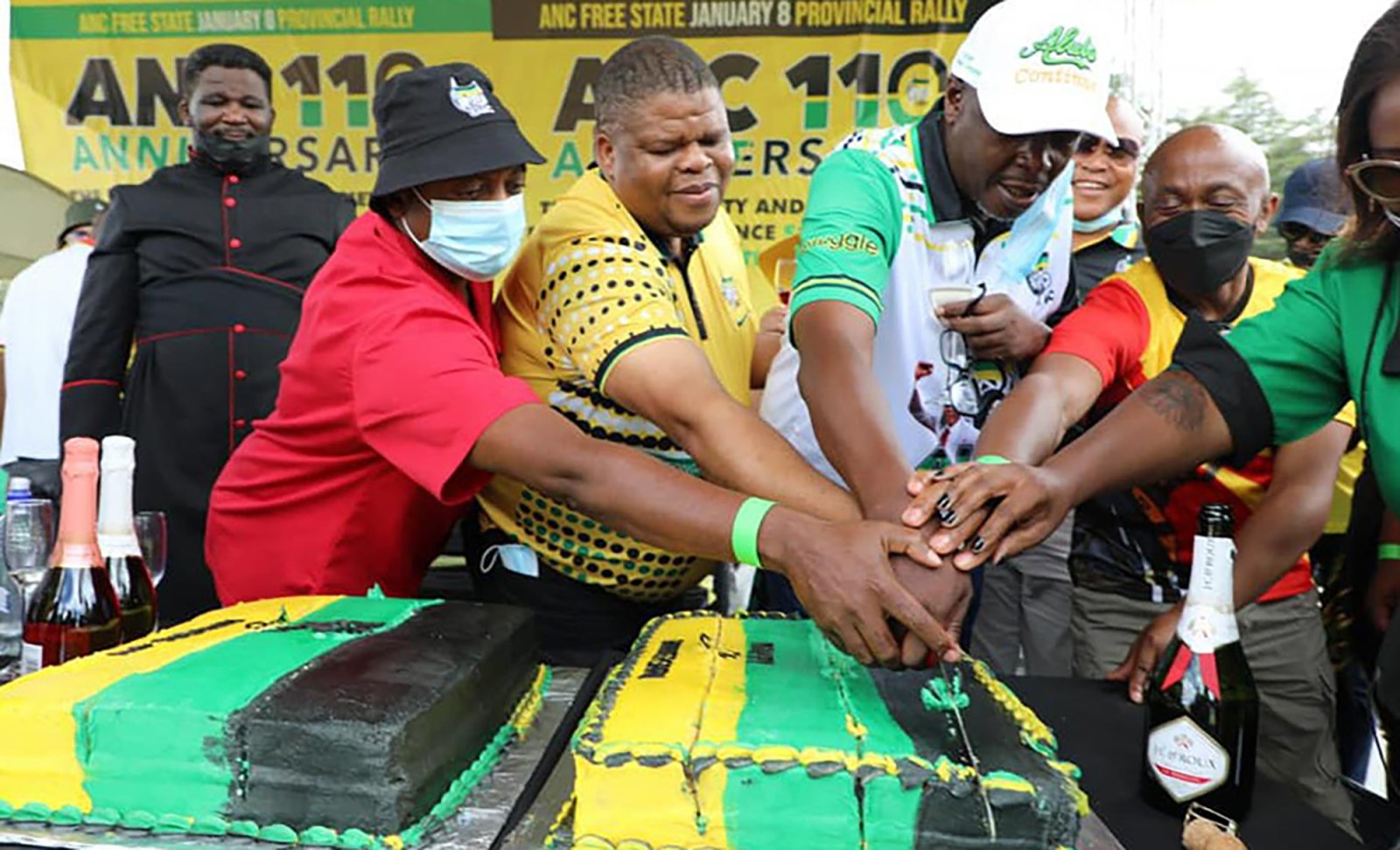 C-Squared Consumer Connectedness, a company found by the Special Investigating Unit to have potentially fraudulently benefited from a multimillion-rand PPE procurement tender, was hired by the Free State ANC to supply event equipment for its 110th anniversary on Sunday in Clarens.

On the back of the ANC National Executive Committee’s (NEC’s) mighty promises to renew the organisation and curtail corruption (robustly stressed by President Cyril Ramaphosa during his 8 January statement), the ANC Free State’s 110th birthday rally on Sunday, 30 January 2022, used the services of a company the Special Investigating Unit (SIU) has found received two irregularly awarded personal protective equipment (PPE) contracts from the provincial government.

C-Squared Consumer Connectedness (Pty) Ltd was among 3,066 service providers probed by the SIU in its investigation into the procurement by the government of goods, works and services associated with the Covid-19 pandemic. The SIU’s findings on the company’s dubious provincial contracts are contained in its 737-page report, which Ramaphosa made public on 25 January.

On 17 August 2020, the SIU received an allegation that C-Squared, which organised the annual Macufe African Cultural Festival, had received a R4.9-million PPE tender without following the proper procurement processes.

The SIU report says: “The grounds on which the contract was awarded and their capacity to produce quality PPE were questioned.”

The SIU found that C-Squared had received two contracts, to the value of R5,123,071 and R6,051,415 respectively, from the Free State treasury to supply PPE, after the provincial treasury had deviated from an open procurement process due to the Covid-19 emergency.

According to the report, the SIU found evidence that former Free State provincial treasury CFO Monaheng Mokoena and the C-Squared CEO, Ben Moseme, may have committed fraud by making misrepresentations on quotations submitted when bidding for the tender and on the goods it procured.

The SIU found the process from which the company benefited was created by Mokoena, “which was not a due process”.

“It was found that the procurement process followed… did not comply with Section 217 of the Constitution as it was not fair, equitable, transparent, competitive and cost-effective,” the report stated.

Additionally, the SIU found evidence that Mokoena, Moseme and C-Squared “may have committed fraud” by making a misrepresentation about the prices of the coveralls and FFP2 N95 masks, “when it was stated that negotiations were held with C-Squared regarding the pricing of the coveralls that was in excess of National Treasury prices”.

Despite this, the ANC’s Interim Provincial Committee (IPC) contracted C-Squared for Sunday’s 110th anniversary event in Clarens – amid objections from some members of the party, Daily Maverick has learnt.

Free State ANC IPC spokesperson Oupa Khoabane confirmed that the IPC had acquired C-Squared’s services for Sunday’s rally, and that concerns had been raised by some party members.

Khoabane explained that the services rendered were for the supply of equipment for the event, which the company specialises in. Khoabane said C-Squared was the company “best placed to carry the event of this magnitude”.

Khoabane said that C-Squared’s services had been secured before the final SIU report was released on 25 January, adding that “the report related to procurement of PPE for government, and not the ANC”.

However, the procurement-related irregularities identified during the SIU’s investigation were reported in writing to the acting head of department of the Free State treasury, Masechaba Sesing, in September 2021. The SIU had requested Sesing to report the steps taken by the Free State Provincial Treasury to address the irregularities, to which she provided a “comprehensive reply”, according to the report.

The SIU had also referred evidence of fraud by the company, its CEO and Mokoena, to the National Prosecuting Authority (NPA) for possible prosecution in 2020.

“Evidence pointing to criminal conduct (fraud) by Mokoena, Moseme and C-Squared was referred to the NPA on 30 September 2020 and 12 November 2020 respectively. Criminal cases were registered at Parkroad Police Station and are currently being investigated by the Directorate for Priority Crime Investigation (DPCI),” reads the SIU report.

Evidence pointing to misconduct by Mokoena had also been referred to the head of department of the Free State treasury on 9 November 2020; however, Mokoena resigned in June 2021, before disciplinary action was taken.

Khoabane confirmed that C-Squared had been paid by the ANC for its services, but was unable to say exactly how much.

“At the moment, costs to the event have not been finalised.”

When asked if the IPC considered it appropriate to be conducting business with C-Squared, Khoabane replied:

“The matter of doing business with a company that has been fingered for wrongdoing in government procurement is a serious matter. That is why some comrades raised it during the interaction among leaders. It was said that the matter will be discussed exhaustively in the next IPC meeting for an organisational approach.”

Khoabane said the issue was raised two days before the event took place. “It would have meant that the event would have to be cancelled had it been decided that the company be abandoned at that stage,” he said.

C-Squared CEO Moseme was contacted for comment but denied his company’s involvement in the event, despite confirmation from the ANC that C-Squared’s services had been acquired. Moseme refused to comment further on the SIU’s findings.

Delivering the NEC’s statement on 8 January in Polokwane, Ramaphosa repeatedly acknowledged the need to get rid of corruption and wrongdoing within the party’s ranks.

“As part of the renewal process, our movement will intensify efforts to eradicate corruption from society and our organisation,” he told the crowd. Ramaphosa is keen to attribute such behaviour within the organisation to State Capture, but the SIU’s investigation into PPE corruption during the Covid-19 pandemic proves how prevalent the rot within the party is. DM