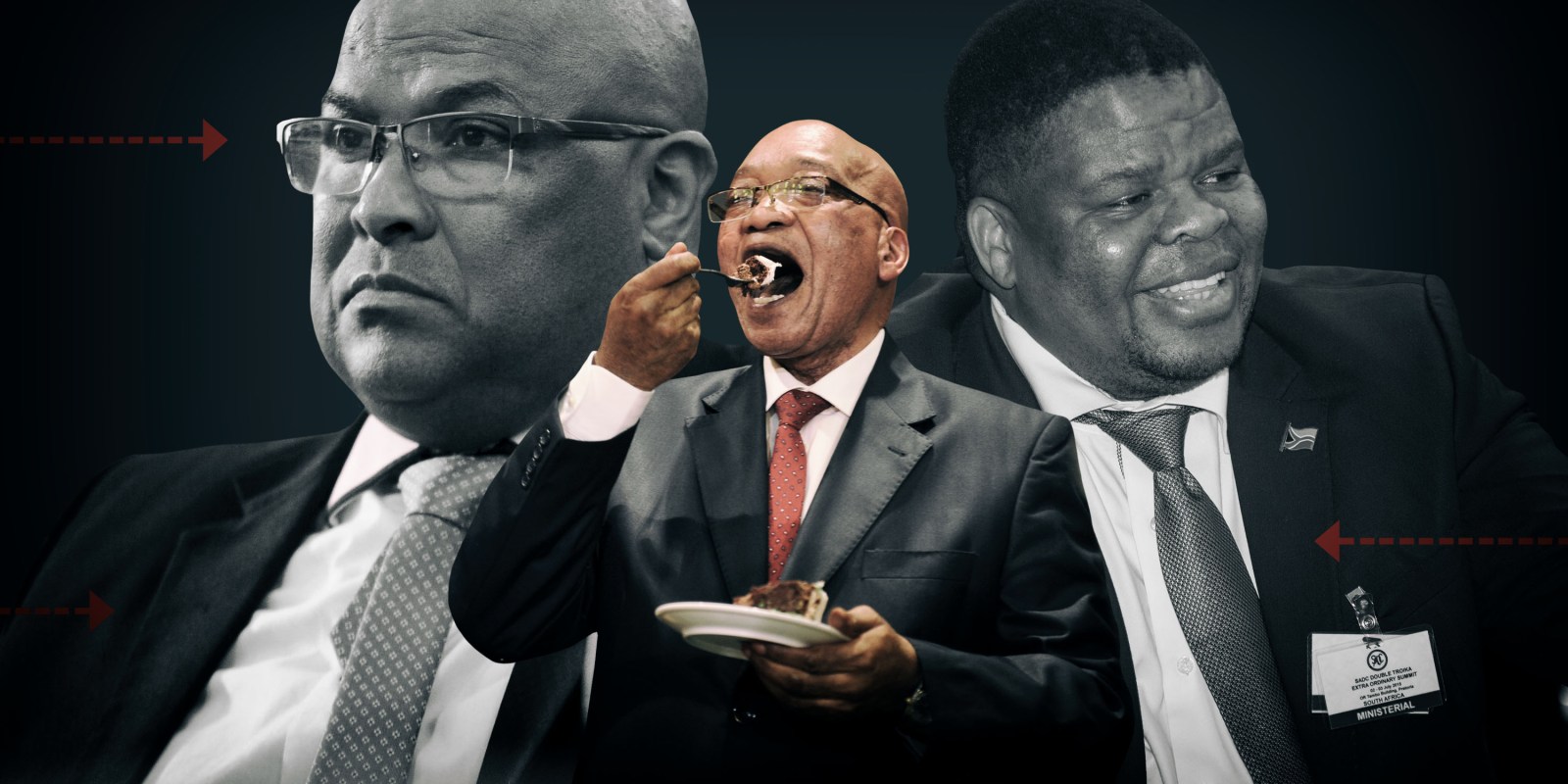 An affidavit and annexures to the Zondo Commision of Inquiry by a senior investigator have set out how the Special Investigation Unit (SIU) in 2011 said it needed 15 months to “make a noticeable and substantial impact on the National Intelligence Agency’s [NIA] ability to prevent and/or detect abuses, misconduct and irregularities in the CSU/PAN programme”.

Instead, testified Peter Henry Bishop, the SIU intervention, which would have cost an estimated R15-million, was torpedoed.

This after “NIA management” opted instead to place the damning preliminary investigation under the auspices of then Inspector-General of Intelligence, Faith Radebe. Radebe held the position between 2010 and 2015.

During her tenure, Radebe failed to implement the structural reforms recommended by the 2002 Matthews commission of inquiry appointed by then intelligence minister, Ronnie Kasrils and chaired by former deputy minister of safety and security Joe Matthews.

Writing in 2018 after Radebe’s death, Chris Barron in the Sunday Times noted “​under her watch, political manipulation of the intelligence services undermined law and order and contributed to State Capture”.

Evidence that has been provided under oath to the Zondo Commission has shown that as a direct result of apparent inaction, an estimated R1-billion was looted from the agency in the years that followed initial attempts by the SIU and NIA head, Gibson Njenje, to arrest the plunder and malfeasance.

Hair-raising testimony has been provided to the commission by former State Security Agency (SSA) acting director-general, Loyiso Jafta, of gargantuan amounts that were unaccounted for.

In 2016, five years after the first damning NIA report and approach to the SIU, Zuma appointed Arthur Fraser as director-general of the SSA. Fraser had been highlighted as a person of major interest to the NIA and SIU.

As former deputy director-general of the NIA, Fraser as well as other members of the Covert Support Unit had been fingered in 2011 already in the NIA-SIU preliminary investigation.

In December 2017, the month of the ANC’s elective conference at Nasrec, the State Capture commission heard that startling amounts of cash had been carted out of the SSA headquarters in Pretoria.

Payback for jailed former president Jacob Zuma arrived just in time for Christmas in December 2021 when Fraser, employed as commissioner of Correctional Services, unlawfully “intervened” to disregard a Medical Advisory Board recommendation that Zuma not be released on medical parole.

Zuma’s arrest was followed by more than 300 deaths, billions lost to looting and violence which followed for nine days of anarchy and disruption in KZN and parts of Gauteng in July.

Bishop, a senior investigator, member of the executive committee of the SIU and acting projects director and head of operations in 2011, set out a series of meetings with the NIA between February and March that year in his affidavit with annexures to the Zondo Commission.

In October 2009, shortly after he was sworn in as President of the Republic, Zuma issued a proclamation incorporating the NIA, the South African Secret Service (foreign branch), the South African National Academy of Intelligence, the National Communications Centre and Comsec (tasked with securing the country’s communications) into what was to become the State Security Agency (SSA).

Sydney Mufamadi, former chair of the high-level panel review into the SSA, told commission chair, Deputy Chief Justice Raymond Zondo, that Zuma’s initial proclamation had“violated the principle of the separation of powers because he usurped the power of the legislature”.

Affidavits by Daily Maverick on Scribd

He told the commission that from accounts provided to the panel, “the SO unit of the SSA was rekindled in about 2011. Its re-emergence was stimulated by the incendiary politics of partisanship and factionalism which had become endemic in the country as well as in the African National Congress”.

Back in 2011, Njenje had already identified that a rapid response would be required to deal with issues highlighted earlier as urgent.

At the time, Bishop’s unit offered to “identify and close system gaps” and form a “specialised multi-disciplinary forensic team” on the basis of our understanding of the complexity, volume and required timelines of the project.

The investigator testified that in assessing whether there was sufficient information to warrant a Presidential Proclamation, the SIU would focus on the establishment of the PAN programme and “the correlation of the entire CSU’s PAN programme with the NIA’s intelligence requirements”.

In other words, had the CSU and the PAN gone rogue?

The interaction between the NIA and the SIU, in consultation with the head of the SIU, said Bishop, had resulted in the authorisation of “pre-proclamation activities” with the aim of applying for a proclamation.

We know now the CSU and PAN had gone rogue, with evidence by Mufamadi to the Zondo Commission highlighting this.

Mufamadi testified that evidence had been provided that Zuma’s minister of state security, David Mahlobo (appointed in 2016), had signed receipts for around R80-million in cash, doled out between 2015 and 2017, collected from the SSA, and allegedly destined for Zuma’s use either personally or politically.

Back in 2011, the SIU had investigated the implementation of the PAN programme and a number of projects “which duplicated the PAN projects already under way in NIA projects”.

Projects “that were not individually authorised” or had “no submission and or authorisation of individual plans or budgets” were also investigated.

Allegations of nepotism, the irregular employment and deployment members of the PAN programme, that PAN members were paid official vehicle allowances in addition to receiving operations vehicles, also formed part of the probe.

The NIA itself had identified several gaping holes including “many PAN members engaged in environmental scanning [which is impermissible as a reason for establishing a covert project]”, the “exorbitant cost of communication systems” and that a server was “situated at former NIA deputy director-general Fraser’s home contrary to NIA prescripts”.

Information collected by this server and in this fashion, it was found, had not been integrated into “NIA’s information management system [DMS] or forwarded for analysis to the “relevant division/unit”.

“In this regard, it is noted that members of CSU generated [created] invoices for G-Tech by using CSU IT hardware and software and then submitted these invoices for payment to CSU,” the initial probe found.

Assets were procured “without following the supply chain management policy, including the purchase of a Cell-C franchise”. Over and above this there was the “letting of property at exorbitant cost” and “properties leased by the CSU from Umvuzo Letting”.

The SIU cost the project at around R15-million, but after Bishop had received “a call from one of the members that had met with me” both Bishop and then SIU head, Willie Hofmeyr, had agreed to reduce the cost of the investigation.

The SIU had no further dealings thereafter with the NIA with regards to the PAN investigation, said Bishop.

A year after the meetings between Njenje and Bishop, in January 2012, Zuma’s alleged “top spy” Thulani Dlomo was appointed to head the SSA’s “counterintelligence” unit.

This was a unit the Zondo Commission heard that had operated effectively as Zuma’s private militia and was “a law unto itself and directly served the political interests of the executive”.

Dlomo’s January appointment unsurprisingly was made shortly after Njenje, then-director-general Jeff Maqetuka and secret service boss Moe Shaik all resigned, amid reports they had clashed with then-minister for state security Siyabonga Cwele.

While Dlomo is yet to be held accountable, the collateral damage of the gutting and bankrupting of the SSA will be felt for years to come, part of the debris of the rubble of the nine wasted years of Zuma’s apocalyptic presidency. DM