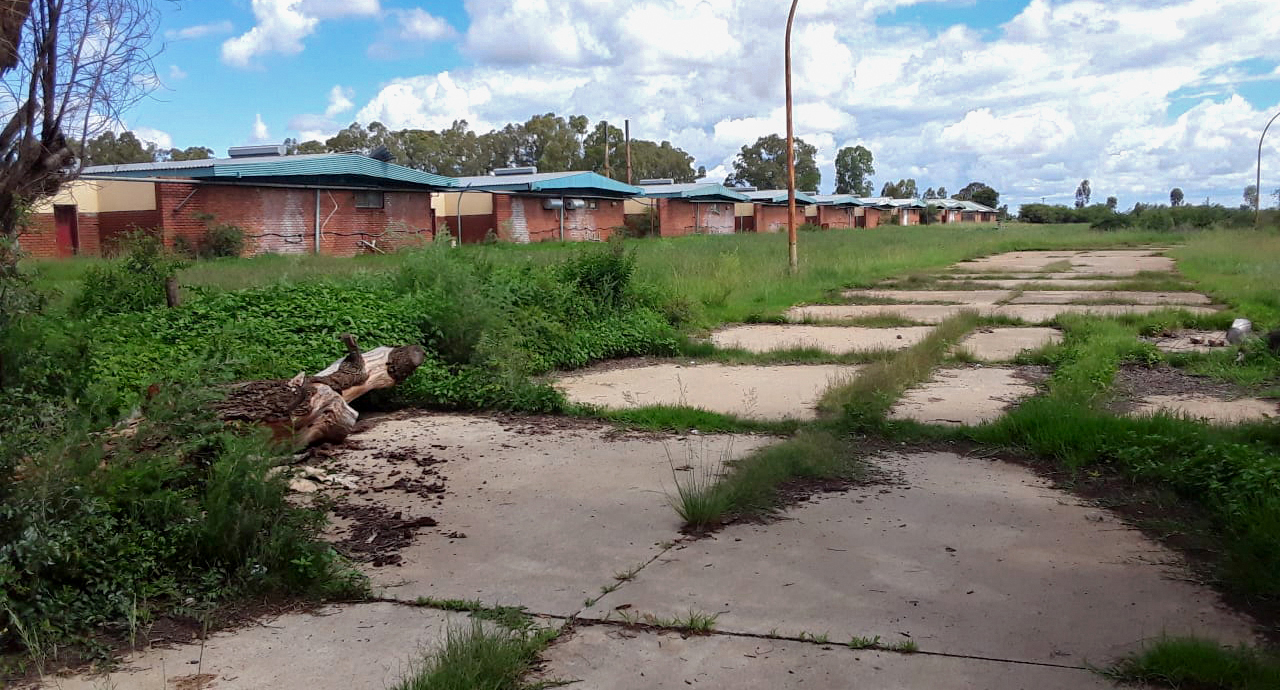 A week after the sudden closure of the Thusong District Hospital in North West, reports of vandalism surfaced. (Photo: Nthusang Lefafa / Spotlight)

The sudden closure of Thusong District Hospital in North West province has left healthcare workers and patients confused and frustrated, with some patients still turning up at the hospital gates, not knowing where to go for medication or treatment.

The North West health department closed the Thusong District Hospital due to “safety concerns” after the detection of heat emanating from the pharmacy’s floor. Investigations into the cause and a decommissioning process to formally shut down the hospital are under way.

According to the department, the hospital was built on dolomitic soil, which they say puts the buildings at risk of collapse. Dolomitic soil is associated with an increased risk of sinkholes due to the mineral’s high solubility.

Twenty-one patients were evacuated from the facility on 13 January. One healthcare worker told Spotlight that the closure has caused chaos because some staff don’t know which hospitals to report to for work and patients unaware of the closure are still arriving at the facility.

The department said this was “not an ordinary closure”, since it was unplanned.

During a visit to the facility on 21 January, Health MEC Madoda Sambatha was surprised to see there were still healthcare workers at the hospital.

Accompanied by Health Minister Dr Joe Phaahla, Sambatha told the staff to remove their belongings and leave. “You must even take your family photo. We don’t want anybody here,” he said.

Sambatha said he was closing the hospital due to concerns for workers’ and patients’ safety.

“I am closing this hospital because I do not want to put the lives of workers and patients at risk. The decommissioning of this hospital has been on the cards for over five years, but because of several management and community issues, it has been delayed. Last year, I officially signed off papers to finalise the process.”

Sambatha said although the decommissioning was still under way, they had to act fast and close the facility to protect staff and patients.

Pharmacists employed at Thusong District Hospital said they were told to go and work at the Itsoseng Community Health Centre, but that they could not legally do so.

“We cannot go and work at the Itsoseng CHC because it is not registered with the SAPC (South African Pharmacy Council). It is important that our employer meets the requirements of all regulatory bodies before we assume any responsibilities.

“The pharmacy at Itsoseng CHC is only registered for clinical care, so we must first wait for registration with the relevant authorities,” said a pharmacist.

Sambatha told the pharmacists that the department would address the issue of registration and see where they could be placed.

According to radiographer Tshegofatso Senna, they were aware of plans for a temporary closure, but then department officials told them that the hospital had been closed permanently.

“We were not aware that the hospital was being closed for good until there were management meetings and the MEC visited the hospital. Patients come here looking for their files and medication on a daily basis. It’s just chaos,” said Senna.

A woman who said she suffered from a heart condition, hypertension and diabetes told Spotlight that she went to the hospital to collect her chronic medication, only to be told that it had closed down.

“I was then referred to the Itsoseng Community Healthcare Centre where administration staff said they could not find my file,” she said.

Another patient, who also spoke to Spotlight on condition of anonymity, said she was turned away from the Itsoseng CHC because her file could also not be found.

“I was told by nurses to go and check for my file at Thusong District Hospital. I had to pay an extra R30 just to go to the hospital to look [for] my file. Security guards told me to go back to Itsoseng CHC because the hospital had been closed by the health department and all files were sent there.

“I had to go home on that day without receiving any treatment… I was hungry and had spent the entire day on the road.”

Eliza Masigo (73) said she had been a patient at the Thusong District Hospital for more 10 years and did not know where to go to collect her medication.

“I was collecting my medication at Thusong every month for over a decade, and also seeing specialists there for a while. I heard through some community members that it was closed. I do not know where to go so I can access specialised treatment for my aching knees.

The CEO of Thusong District Hospital, Gaborone Seleke, told Spotlight that patient files were being sorted and sent to health facilities closest to where a patient lived.

On the closure, he said the health department had conducted occupational health service assessments which found the facility was not fit for patients and workers. He said the facility would be handed over to the Department of Public Works once the decommissioning process was completed.

Seleke said they had issued communication alerts in the form of radio adverts and would also put out newspaper adverts to inform the public about the hospital closure. On the issue of staff placements, Seleke said they were compiling a staff list. Healthcare workers were being placed at facilities they were closest to.

“This is a change we all have to manage.”

As health authorities scramble to manage the fallout from the sudden closure, the facility has already been vandalised. Two borehole pumps have been stolen and security guards at the facility told Spotlight that they had chased criminals who were carting off geysers.

“We fear for our lives because criminals have opened the fence at the back and are looting hospital property. When one security guard approached a group of men who had entered the hospital, he was attacked and bricks were thrown at him,” a security guard told Spotlight.

According to Seleke, they are now beefing up security — six guards have now been deployed at the facility. He also instructed the head of security to open a case against those involved in the looting.

According to Ntombi Moepeng, provincial secretary of the National Education, Health and Allied Workers’ Union in the province, there are cracks in implementing the hospital closure and decommissioning process.

“Although the department started the decommissioning process in March last year, there are still some delays in placing staff at various hospitals. We are aware that the closure was sudden, but we feel that the department has delayed planning the whole process because they knew about it for a long time.

“It is evident that there was a lack of proper planning on the side of hospital management.”

Moepeng said some workers had been placed far from where they lived, and that plans to convert Itsoseng CHC into a district hospital had not unfolded as stipulated in the decommissioning document.

“While we agree that worker and patient safety is a priority, some workers have been placed far from where they reside and this will cause an inconvenience — some will have to pay more for transport and others will have to relocate.

“Some hospitals have problems of their own, like dilapidated infrastructure, and we do not want to frustrate workers. We are really not happy with how the process unfolded… some meetings relating to the decommissioning process were held without worker representatives.”

Gavin Edwards, DA spokesperson on health in the province, said the hospital closure was unfortunate, but there was no alternative.

“We are aware that the North West health department is generally slow in terms of implementing some decisions and it has experienced some difficulties in terms of service delivery, but we were at a crossroads and the hospital had to be closed down,” he said.

“The hospital closure is an inconvenience to patients, workers and the community at large and we believe that the process could have been managed better.”

Meanwhile, the provincial health department says it is awaiting a final report about the cause of the underground heat detected in the pharmacy at the hospital. Sambatha indicated that costing for the decommissioning process was being finalised. DM/MC