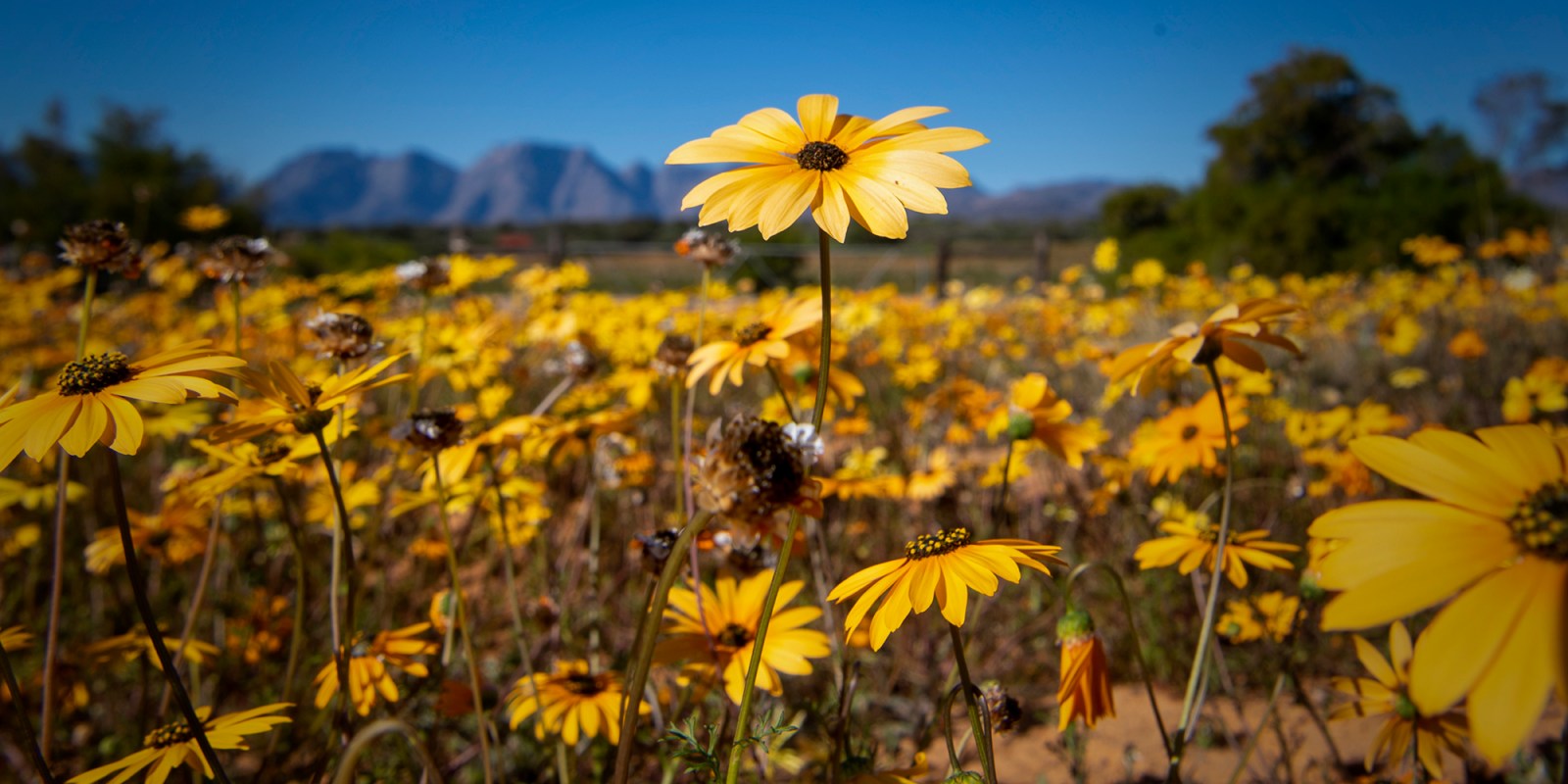 Research from the University of the Witwatersrand suggests climate change is shifting the seasonal cycle of the Namaqualand daisy — threatening tourism and the very existence of the famous wildflower. Without intervention, the backbone of local biodiversity could be lost.

Phenology, simply put, is the study of the timing of biological events, such as seasonal changes that determine when flowers bloom and when they are dormant. Snyman and Fitchett found that climate change was altering the seasonal cycle of Namaqualand daisies.

Daily Maverick spoke to Fitchett, who highlighted two primary reasons why this climatic phenomenon could weaken the daisies to the point of extinction.

The first is that the dormant phase of the daisies, typically the winter, is shortened by warmer weather. This dormant period is essential for “the storing and accumulation of energy for the next reproductive season”, according to Fitchett.

“The earlier the flowering date, the shorter the dormant phase, and therefore the shorter the time period for this time for plants to, in a sense, rest and recover,” she added.

The second reason is a “Catch-22”. Despite warmer winter climates due to climate change, Western Cape and Northern Cape, where the Namaqualand daisy is endemic, experience “mid-latitude cyclones” which can trigger “frost events”, regardless of the warmer temperatures.

In theory, the daisies could be agriculturally salvaged by growing them in greenhouses, “but that takes away the spectacle of the Namaqualand daisies”.

Moreover, and more immediately, such a measure would negatively affect tourism. “So we could keep the species from going extinct, but wouldn’t save the tourism attraction,” said Fitchett.

If there were seasonal shifts and a decline in daisy populations, tourists could not properly plan viewing trips.

Determining when these climatic effects will become irreversible is impossible at the moment, but Fitchett suggests it is a matter of “tipping points”.

“A few years of failed blooms could cause irreversible damage if no seeding occurs, but it is difficult to predict when that would occur,” she explained.

What is certain is that biodiversity will suffer in the wildflower areas. Because Namaqualand daisies do not grow elsewhere, other wildlife in these areas will also feel the shifts and decline.

“They provide habitat and food for insects and birds, and thus form part of an ecosystem,” said Fitchett. “So any loss of species richness is a loss for biodiversity, but also a threat to the rest of the food chain.”

The point of irreversibility has not yet been reached.

Snyman and Fitchett suggest in their paper that South Africa is in need of increased phenological inquiry and data-driven research to effectively combat the problem.

Earlier, Fitchett and a team used a similar methodology to highlight the impact of global heating on the blooming of jacarandas in Pretoria and Johannesburg.

Fitchett argued for “a strong focus on a just transition” in terms of energy resources. “We need to urgently move away from coal and towards renewables.” DM