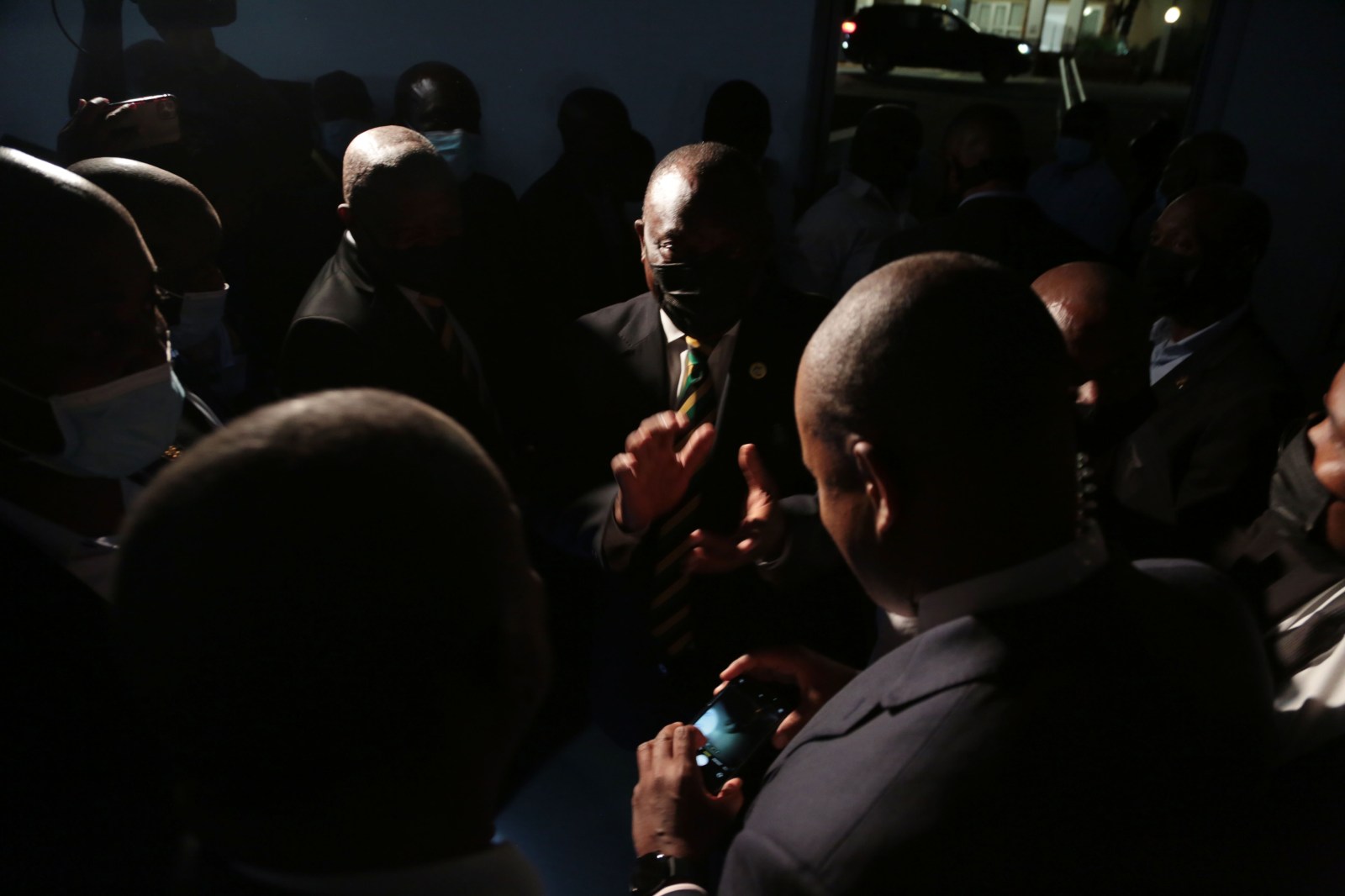 President Cyril Ramaphosa speaking to a few journalists while leaving the hall after a power outage while he was addressing the Gala Dinner at the Ranch Resort outside Polokwane. LED lights from television crews illuminated the venue. Photo: Felix Dlangamandla/Daily Maverick

President Cyril Ramaphosa's address to guests at the ANC's 110th birthday gala dinner in Polokwane on Friday night was cut short by a power outage as he was about to conclude his 45-minutes-long speech. "I think somebody's mischievous," said ANC chairperson Gwede Mantashe.

Possibly none of the guests or ANC leaders there really believed the story ANC treasurer-general Paul Mashatile tried to spin, at the spokesperson Pule Mabe’s insistence, that the outage was a mere “technical glitch” and thus the problem of the venue managers. Most believed it was caused by one of Ramaphosa’s detractors, although only journalists actually uttered the word “sabotage”.

The outage only affected the inside of the 1,300-capacity Makhulu Hall at The Ranch Protea Hotel, 26 kilometres outside Polokwane just before 9.30pm on Friday night.

Mashatile, as treasurer-general, was overseeing the organisation of the annual fundraising gala dinner, where seats at the president’s table went for R1.2 million.

“I think somebody’s mischievous,” ANC chairperson Gwede Mantashe – who is also Minerals and Energy Minister – told Daily Maverick as he left the hall from which Ramaphosa and his deputy, David Mabuza, were whisked away moments before.

Mantashe told Newzroom’s Xoli Mngambi, who asked some straight questions over what was happening, that some people use the freedom they are given in a democracy “to disrupt institutions of the state”. Mantashe said these people were not happy that there is freedom and democracy and “it is our responsibility as a democratic people to lead the country out of that morass”.

Mantashe didn’t want to be drawn into speculation that electricity blackouts could be ascribed to ANC factions.

Ramaphosa took care not to appear panicked by the outage, and did not immediately leave the stage after the camera lights were switched on, about 15 seconds into the blackout.

It really was meant to be his week and a soft launch of his campaign for a second term as ANC president.

Limpopo’s Premier Stan Mathabatha, also the ANC’s provincial chair, said to applause in his introduction of Ramaphosa earlier in the evening, that the party wanted him to be elected for a second term (an unofficial and somewhat premature endorsement ahead of the ANC’s elective conference at the end of this year) and would pray for him to have good health.

At the point of the outage Ramaphosa was speaking about the “arduous” but “necessary” task of rebuilding and renewing the ANC. He thanked the businesspeople and other guests for sticking with the party through its ups and downs.

“Maybe it is similar to this fable that is often talked about, how an eagle renews itself,” Ramaphosa said, repeating a story he had told a number of times before. “It flies to the highest peak and takes out its talons, its feathers, and waits for regrowth.”

It was also telling that he went on speaking for a couple of minutes in semi-darkness even as his security detail was in a hurry to evacuate him from the venue. In that time, Ramaphosa praised the ANC in Limpopo for the province’s good performance in the elections, where it bagged 68.27% of the vote in last year’s local government elections, second only to its performance in Mpumalanga.

“I want to commend the leadership for flying the ANC flag very high in this province,” he said.

The power cut was one of a series of unusual happenings that followed Ramaphosa around his home province in the past three days as he addressed faith-based and traditional communities, as well as ANC’s rank and file.

Earlier on Friday, a security officer outside the Polokwane Council Chambers where Ramaphosa was due to deliver the Peter Mokaba Memorial Lecture, described a situation of a large group of protesting people dressed in ANC colours at the gate, demanding to be let inside, as “volatile”. Only a limited number of people were given accreditation to the venue due to Covid-19 regulations and Ramaphosa eventually addressed them outside from the back of a van.

He told dinner guests that only about half of the young people in the crowd wore masks – a requirement under Covid-19 regulations – and only about 40% of them indicated that they had been vaccinated.

On Thursday, Ramaphosa left an ANC Women’s League event at the Lebowakgomo Civic Centre just minutes after arriving, ostensibly due to non-compliance to Covid-19 regulations. But News24 reported that there were security concerns, amongst others that X-ray machines at the entrances were not working.

Disturbing news events earlier in the week, such as the fire at Parliament and the breaking of windows at the Constitutional Court by a convicted murderer on parole are adding to the narrative that a rebellion of sorts is brewing and that the country’s security agencies – especially those around Ramaphosa – are failing.

Despite these events, and despite admitting that there is pushback against Acting Chief Justice Raymond Zondo’s state capture report, of which the first part was published by the Presidency this week, the president, as well as Mabuza, said this week that the country was not under siege and that things were under control.

Ramaphosa in his speech on Friday night also hinted that an emphasis would this year be placed on building and “renewal” in ANC branches. This would be important for him because it is branch members that will decide the outcome at the party’s year-end conference, and also because his detractors had been concentrating their energies on lobbying local ANC members and trying to swing branches in their favour.

Suspended secretary-general Ace Magashule, for example, prides himself for being able to lobby grassroots support in the ANC (although he apparently had to cancel plans to hold an unsanctioned event in Limpopo ahead of Saturday’s rally, after the ANC told him to do so), as does former president Jacob Zuma, under whose presidency the ANC grew to over a million members in time for 2012 Mangaung Conference.

“The membership of the ANC must be guided by integrity and discipline,” Ramaphosa said.

Ramaphosa also spoke about the work of the ANC’s women’s, youth and veterans’ leagues, all three of which are important voting lobbies in the party. He also praised the party’s alliance partners, the SA Communist Party and labour federation Cosatu, both of which he will need on-side in the ruling party’s presidential campaign year.

“Ending patronage and corruption in the ANC and broader society is an objective that we are aiming to achieve,” he said, adding that members of the movement should be “conscientised” to put the interest of the people first.

“Our work is continuing,” he said. “Whilst we have encountered resistance from within our organisation, we will not deviate from our fundamental task of renewing and rebuilding our organisation. That is going to happen, whether people like it or not.” DM