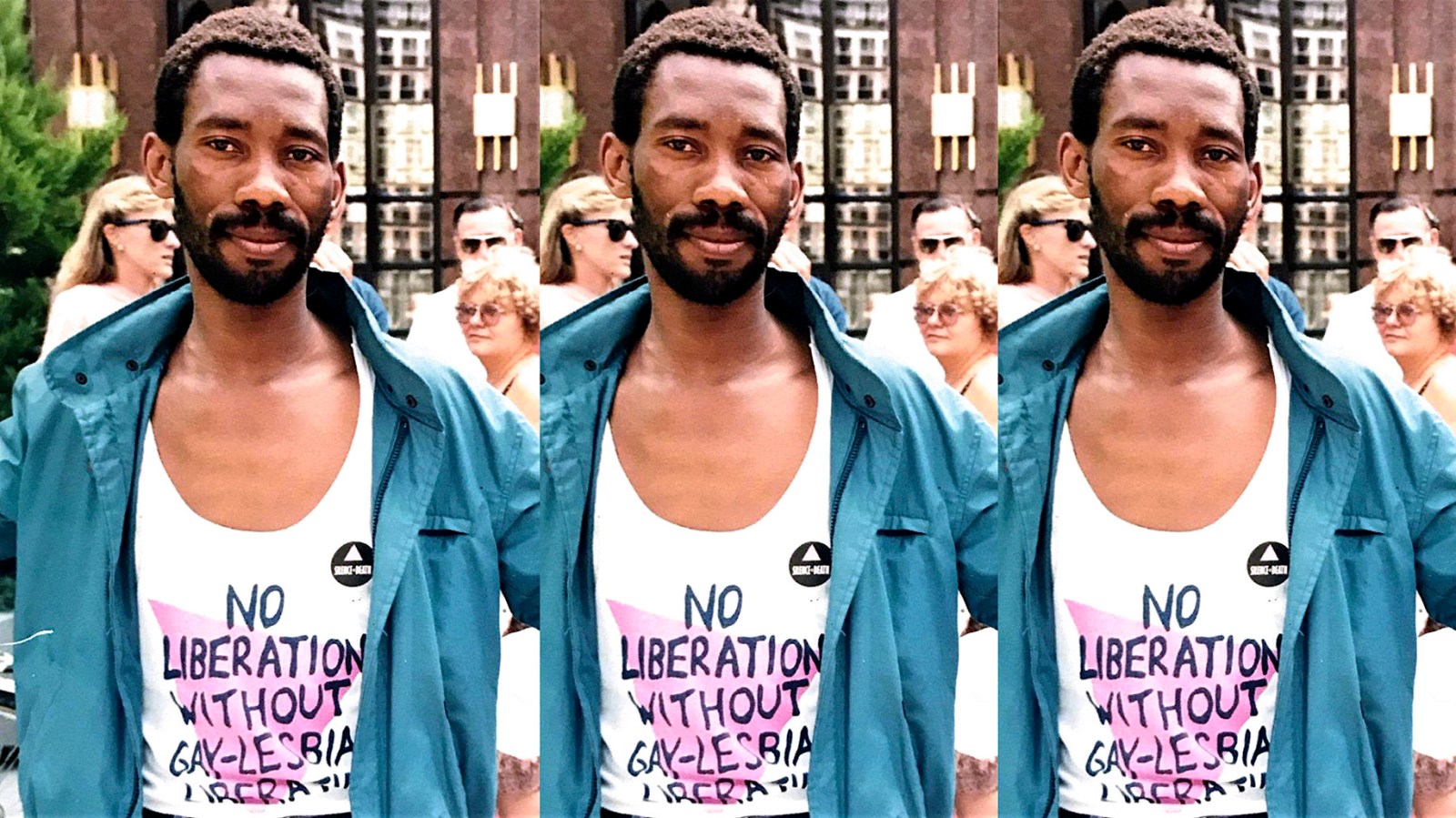 Simon Nkoli, a gay anti-apartheid activist who belongs in the pantheon of South Africa’s heroes — but is probably unknown to many. He is one of a handful of activists whose personality, politics and in-your-faceness reshaped our world. (Photo: GALA Archives)

According to its creators, ‘GLOW, the life and trials of Simon Nkoli’, is a ‘contemporary, hybrid, vogue opera, combining operatic voices with choral protest songs; drag artists singing and lip-syncing; sampling sound and video archive to disco beats’. It is likely to be a big hit in 2022.

Tuesday, 30 November, the eve of World Aids Day, is the 23rd anniversary of the death of Simon Nkoli. Simon died of Aids. He was a smorgasbord of both flamboyant and introspective personalities — a freedom fighter and political prisoner, a queer activist, a pioneering Aids activist, a dreamer and a writer.

Simon belongs in the pantheon of South Africa’s heroes — but is probably unknown to many. He is one of a handful of activists whose personality, politics and in-your-faceness reshaped our world.

In the early 1980s, Simon, his comrades (among them Phumi Mtetwa, Zackie Achmat and Bev Ditsie) founded organisations such as Gay and Lesbians of the Witwatersrand (GLOW) and the Township Aids Project. Together with retired judge Edwin Cameron, he campaigned successfully for the inclusion of a prohibition of unfair discrimination on the grounds of “sexual orientation” in our Constitution’s pioneering equality clause.

In 1998, Simon’s death came at a time when treatment for HIV was a privilege only a few could afford. At his funeral, Achmat called for an HIV treatment action campaign, a movement that would come to life in the following years and help prevent millions of deaths through waging a successful struggle for antiretroviral medicines and a national treatment plan.

Several weeks ago I was privileged to be invited to a special review performance of a new “vogue opera” that is based on Simon’s life, “GLOW, the life and trials of Simon Nkoli”, conceived by composer Philip Miller. The preview marked the end of a 10-day creative workshop of singers, musicians, costume designers, filmmakers and researchers to co-create the opera and an online film installation to accompany it.

It’s the end of another plague year, a year in which more people have died in South Africa than since the peak of the Aids epidemic. But as I stepped off the street in Linden, Johannesburg, into the studio where the performance was under way, I entered another dimension. Lights, colour, orchestra, dance.

A small audience huddled around a stage watching a multi-sensory performance bringing Simon Nkoli, and his many trials, back to life. It felt like being blasted into a better world.

Veteran producer and public health activist Harriet Perlman, the creative producer, explained to me how GLOW is performed as “vogue opera”, set around different “coming out” moments (scenes) in Simon’s life.

“Each vogue category is an episode in Simon’s ‘coming out’ journey: To his mother as a gay man; on the streets of the township to fight apartheid; to his ANC comrades in prison while on trial for treason, ‘the faggot in the docks’; to the world as the organiser of SA’s first Gay Pride march; to his community that he had Aids.”

Philip Miller notes, “Voguing South African-style has its roots firmly in the township beauty pageant scene from the late 80s-90s. It has re-emerged in urban South African queer life and on the international stage popularised by Netflix’s Pose.”

In this opera though, the setting is a voguing ballroom contest at the once-famous Johannesburg queer bar, the Skyline. The set is beautifully created as a voguing ramp, conceptualised by visual designer Catherine Meyburgh.

The music to GLOW is being created by internationally renowned SA composer Miller, with classically trained opera singer Tshegofatso Moeng acting as musical director and conducting the orchestra.

The lyrics are a combination of Simon’s own words and writing, and an exciting new libretto. Miller is working with a co-lyricist; the rapper and performance artist S’bonakaliso Nene (Gyre) and researcher Welcome Lishivha.

According to Miller, his passion “is to make a unique multimedia opera that makes an impact with young contemporary audiences who have not experienced the way in which music, song, film, archive come together and makes something that breaks the mould of what people think opera is”.

Miller says: “I am a gay artist and activist who has always worked with the power of arts and music to promote issues of social justice. GLOW could not be more timely, as we see across the world a rightwing backlash of homophobia, transphobia and hate crimes.”

Moeng’s enthusiasm is equally evident. He says it has been a “huge honour” to be brought on board… “eye-opening to the life of Simon and the struggles of the LGBTQI community.

“As a straight man it meant becoming less of a stranger with the other; I saw more of myself in the other. It’s had a lasting impact on me,” says Moeng.

Many of the actors and dancers were just as unfamiliar with Simon’s life. Simon is performed by young countertenor Simphiwe Simelane from the Tshwane University of  Technology (TUT). With three other talented opera singers from TUT, and their teacher Mhlaba Buthelezi, their excitement at working on this new contemporary work shone through their energetic performances.

Although still a work-in-progress, the 10-day-old opera I saw was already rich in meaning, music and dance. It’s an eclectic, irreverent, camp mashup of genres that combines song and dance with voiceovers from interviews given by Simon. The colour is in the costume and performance created by stylist Neo Serati and choreographer Llewellyn Mnguni.

An otherwise sparse set revolves around a pink cage. The vogue opera draws extensively on the GALA archive. GLOW is not only popularising the archive, but augmenting it with new interviews, recreations of letters, sound archive and film. Simon’s letters from prison are read and lip-synced — including one to Edwin Cameron, a friend, lawyer and comrade in Simon’s struggles — as well as projected on to the back of the stage.

Simon may be gone, but his spirit has lived on. So too have his comrades, some of whom appear as characters on the stage and in the score. On that day in November, several were in the audience, including filmmaker and lesbian activist Dr Bev Ditisie, one of the earliest campaigners for gay rights; Gcina Malindi, now a judge, fellow comrade and close friend and back then one of the Delmas Treason Trialists and writer and outstanding documentalist of queer life and struggles, Mark Gevisser.

In an especially poignant moment, Malindi and Ditsie were asked to sit a few feet from the front of the stage as the people who played their characters enacted their roles in the unfolding vogue.

It felt surreal: life watching life through art; art reflecting back on life. The eyes of the beholder back on the eyes that beheld. Witness across epidemics; love in a time of apartheid versus love in a time of democracy and ongoing homophobia and hatred.

GLOW glows, and it felt to me like an opera-in-waiting that’s destined to subvert the stage. It made me proud in pride and, honestly, could only be made in cruel, crazy beautiful South Africa.

It’s South Africa’s own The Adventures of Priscilla, Queen of the Desert; an Opera (with a capital O) about the exuberant struggle for personal and political freedom of a black, poor, gay, HIV-positive young man from Sebokeng who made such a difference to millions of lives. So laden with meanings. So vibrant. One day it should make Broadway.

Afterwards, I overheard Ditsie and Gevisser talking, as they shook their emotions out to dry: “It felt like Simon was in the room,” they agreed. He was. DM/MC/ML

Watch Beverly Ditsie’s 2001 film about Simon’s life, Simon and I.