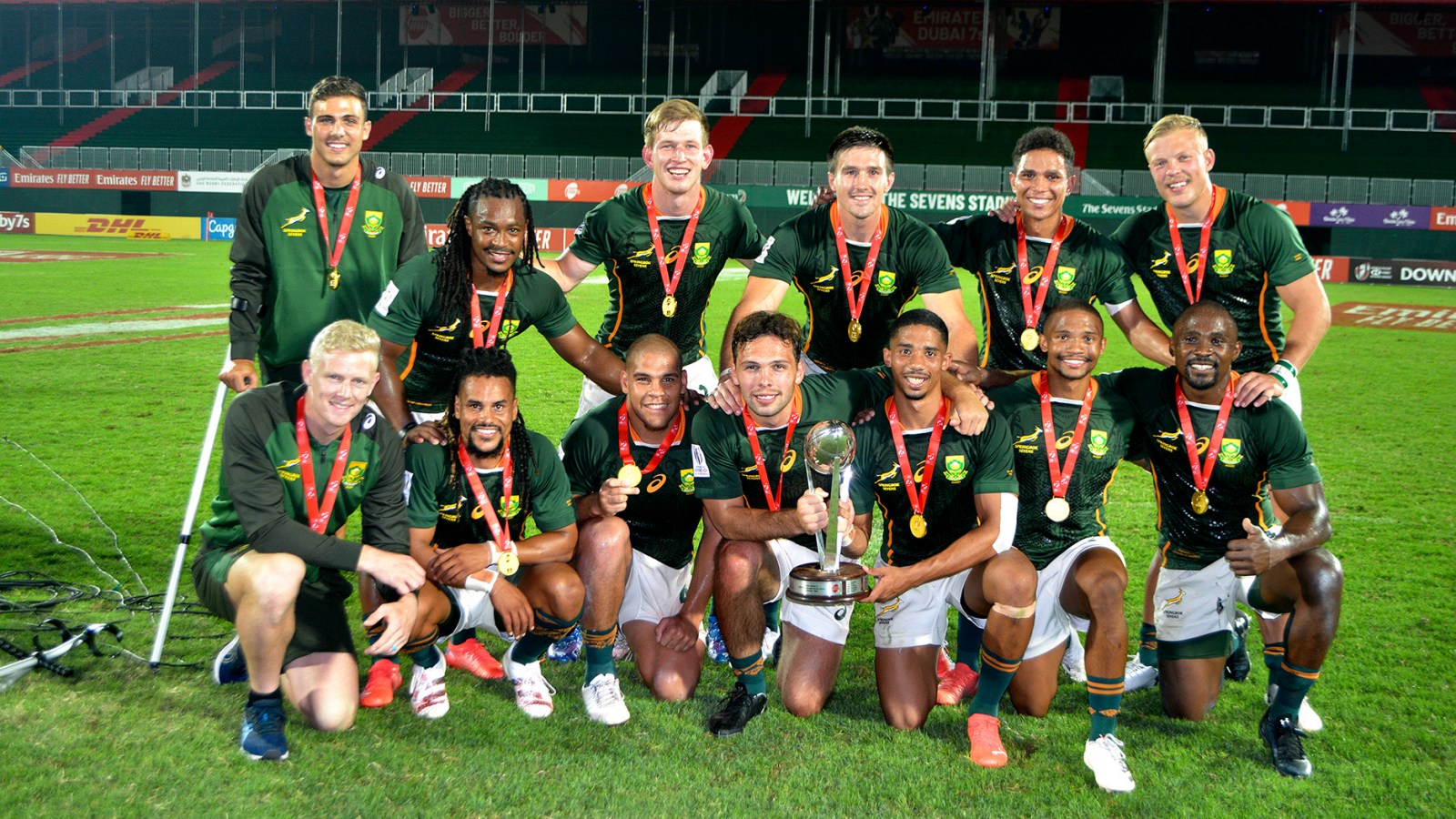 The Blitzboks captured the Dubai sevens title in emphatic fashion, but there is doubt over the immediate future of the World Series due to the new Covid variant.

The South African sevens team has seldom dominated an event as emphatically as it did in Dubai over the past weekend, but their great form might be in vain as organisers consider the future of the series.

The emergence of the SARS-CoV-2 virus variant, B.1.1.529, or Omicron, is threatening not only the World Series’ future, but many other sports events’ continuation in the coming weeks and months.

A World Rugby spokesperson confirmed to Daily Maverick that at this stage next week’s second round, staged in Dubai, is set to go ahead.

“We are in regular contact with the relevant authorities and monitoring the situation. The event is continuing as planned,” the spokesperson said.

For the record, the Blitzboks won the Dubai title with a 42-7 victory over the USA in the final. That followed a comfortable 17-7 win over Argentina in the semi-finals and a one-sided 29-5 victory over Australia in the quarters. The Blitzboks also topped their pool with three emphatic victories on their way to an eighth Dubai crown.

Ronald Brown, a cancer survivor, scored a hat-trick and converted five of South Africa’s six tries to be named Player of the Final.

He dotted down his first after just one minute before Selvyn Davids skipped through the USA defence and looped a pass out to JC Pretorius for the Blitzboks’ second try. From then on it was almost all one-way traffic.

It was also the third successive tournament victory for the Blitzboks, following wins in Vancouver and Edmonton, which were the only two events of the 2020/21 series.

By winning six games in Dubai, the Blitzboks broke their own record of 16 consecutive match wins, which they set in 2008/09, stretching the sequence to 18 wins in all.

Whether they have a chance to extend that run next weekend, again in Dubai, is still unclear. The long-term status of the sevens series is “undergoing a feasibility assessment”, according to an insider.

Already, New Zealand and Samoa were unable to participate due to Covid-19 related travel problems, while Great Britain were competing as a combined side before they revert to Scotland, Wales and England national teams after the second Dubai event, if the remainder of the series goes ahead.

What made the Blitzboks’ performance over the weekend more remarkable was that they had only 11 fit players for much of the two-day tournament, as a result of injuries to the experienced duo of Ryan Oosthuizen and Muller du Plessis. They had already travelled to Dubai without several regulars who were not considered for the trip because of injuries.

Blitzboks coach Neil Powell praised his team for delivering improved performances when it mattered on the second day.

“I’m obviously very happy with today’s performances, especially after our discussion last night when we said we had to work better in our system,” said Powell.

“We wanted to look after the ball and to be better in defence and attack. Today we were clinical, and it was an amazing performance by the team to beat such a strong USA team.

“We will obviously do a review of our performance and see in which areas we can improve. There’s always room for improvement and we will be hard on ourselves to make sure we are mentally and physically ready for next weekend.”

The United Rugby Championship (URC), the European/African tournament that includes elite teams from South Africa, was thrown into disarray this weekend with the outbreak of Omicron.

Four fixtures in South Africa were cancelled, with Ireland’s Munster, Wales’ Cardiff and the Scarlets and Italy’s Zebre all in a scramble to return home as the United Kingdom and European Union shut down travel routes.

Munster failed to leave the country after a player tested positive for Covid-19 and are currently in isolation in a Cape Town hotel.

A Munster statement on Sunday read: “After arriving at their hotel in Cape Town late last night the squad underwent a round of PCR testing ahead of today’s possible departure.

“The returning results have identified one positive case. In taking all precautions and prioritising the health and wellbeing of everyone, Munster Rugby will not travel today and will return to their hotel for an isolation period as a matter of priority.

“The province will await further guidance from the health authorities.”

The Scarlets and Zebre managed to depart from South Africa, but Cardiff, who returned two positive Covid tests, will also remain until their travel arrangements are cleared. They had managed to secure a chartered flight to leave South Africa, but those plans were derailed by the positive tests.

“The travelling party had hoped to depart Cape Town this afternoon after a charter plane was secured; however, PCR tests undertaken last night have returned two positive results,” Cardiff said in a statement.

“As a consequence of one of these results suspected of being Omicron, the entire travelling party have returned to their hotel to isolate.

“Cardiff Rugby continue to work with the South African Rugby Union, the Welsh Rugby Union and public health authorities both at home and abroad to decide the next course of action.

“The club are also continuing to work with all relevant authorities to secure the travelling party’s return to Wales when safe and appropriate.

“Everybody concerned in this highly challenging situation would like to thank their families, friends, colleagues and the wider rugby family for their many messages of concern and well wishes.” DM