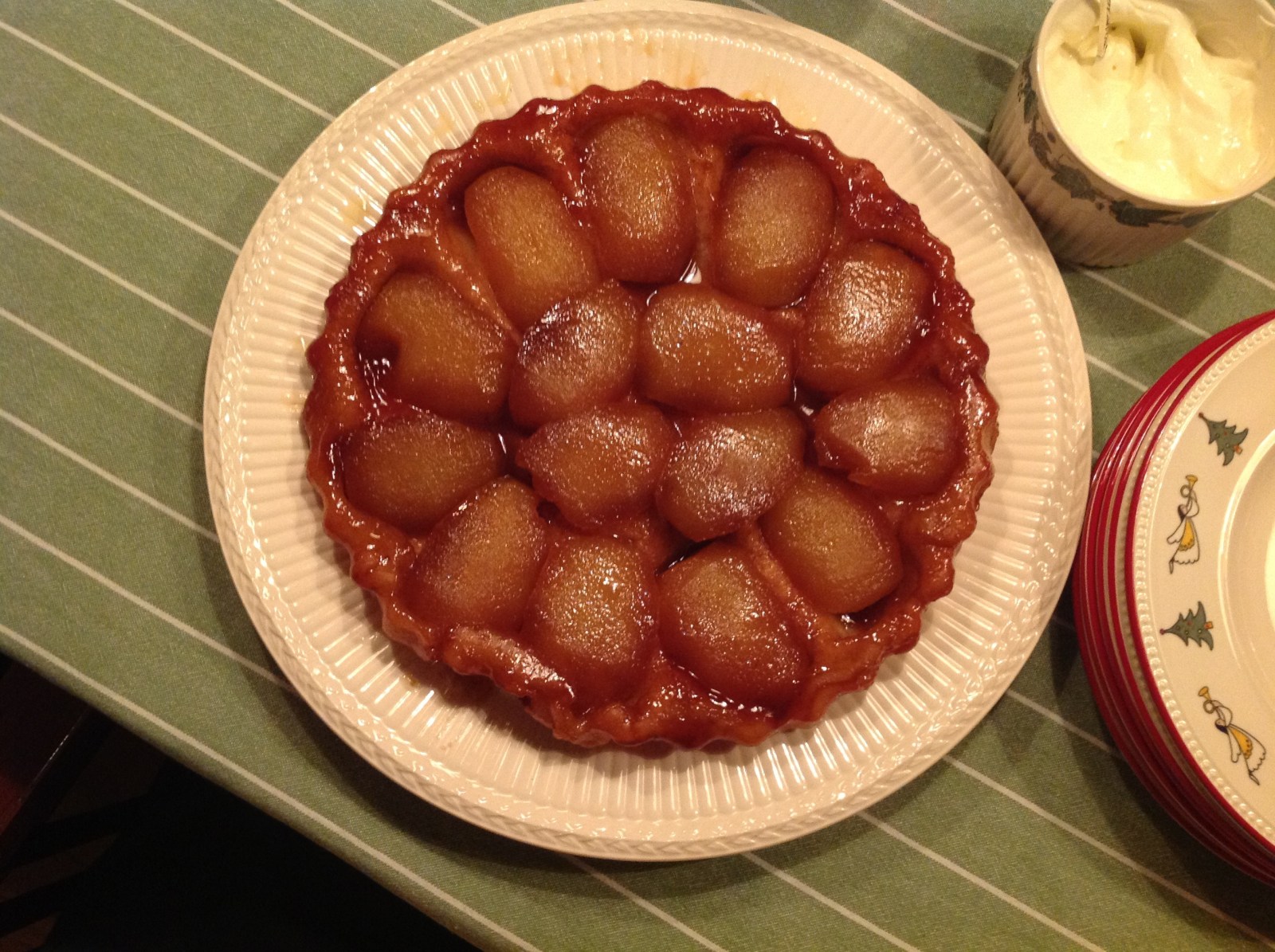 The fascinating and complicated story of the demoiselles Tatin and their world-famous apple tart.

Lamotte-Beuvron in the Loir-et-Cher department of France, on the banks of the Beuvron river, is equestrian country and also known for its abundance of game, big and small, from deer and wild boar to woodcock, pheasant and pigeons intended for the pot. But to food lovers everywhere it has a more important provenance. It was the home of the Tatin sisters, who ran the Hôtel Tatin in the late 19th and early 20th centuries, and where they are regarded as having invented what we now call the Tarte Tatin, or upside-down apple tart.

The story goes, or rather the stories go, that Stéphanie and Caroline Tatin found themselves with an extraordinary hit on their hands, quite by chance.

One theory, and the one most widely believed (but read on), is that Fanny, as Stéphanie was known, one of the two then already elderly sisters, was overworked as usual in the hot kitchen and forgot about the apples she was cooking on the stove top in butter and sugar, which she intended for one of the traditional apple pies she was in the habit of making. Alerted by the smell of sugar burning, she rolled out some pastry she had to hand, covered the apples with it, and shoved it in the oven.

Once the pastry was golden and crisp, she turned it out onto a plate, cut it into portions and sent small plates of it out to the customers. If you’ve known and loved Tarte Tatin, you’ll know what happened next: swoons and compliments, and of course the dish became a regular item on their menu.

But. And yes, it’s a big but. A remarkably similar dish called a tarte aux pommes à la Solognote had already existed and was in fact named after the Sologne region around Lamotte-Beuvron, home town of the demoiselles Tatin. Wikipedia is precise on the subject: “Research suggests that, while the tarte became a specialty of the Hôtel Tatin, the sisters did not set out to create a ‘signature dish’; they never wrote a cookbook or published their recipe; they never even called it tarte Tatin. That recognition was bestowed upon them by Curnonsky, famous French author and epicure, as well as the Parisian restaurant Maxim’s after the sisters’ deaths.” Curnonsky was the pen name of Maurice Edmond Sailland, known as the Prince of Gastronomy for his (what we would now call) food writing.

Wikipedia offers the story of one Louis Vaudable, who decades later would own Maxim’s in Paris, who wrote: “I used to hunt around Lamotte-Beuvron in my youth and had discovered, in a very small hotel run by elderly ladies, a marvellous dessert listed on the menu under tarte solognote; I questioned the kitchen staff about its recipe, but was sternly rebuffed. Undaunted, I got myself hired as a gardener, but three days later I was fired when it became clear that I could hardly plant a cabbage; however, this was long enough to pierce the secrets of the kitchen; I brought the recipe back and put it on my menu under ‘tarte des demoiselles Tatin’.”

This, however, would seem unlikely as Vaudable was only born in 1902 when the demoiselles Tatin were nearing retirement.

Whatever its provenance, the allure of a tarte Tatin is not lost. There are several elements that conspire to create the magic that is a tarte Tatin. The saltiness of the pastry. The deeply delicious caramelisation of the sugar with the apples or other fruit, working together to thrill the taste buds. The heat of the dish, which is always best served hot from the oven as if from the very kitchen of the Hôtel Tatin in Lamotte-Beuvron; one mouthful should take you there, through time and space. Close your eyes and picture the old range in the sisters’ hot and steamy lair.

But. And it’s an even bigger but. Today, the tarte Tatin even has its own website, run by Bernard Munos, who spent his teenage years in Lamotte-Beuvron before emigrating to America. His website is packed with research and what appears to be well backed-up information, and reveals that Fanny and Caroline only opened the hotel in 1894, by which time “the tart already had a solid following”.

He avers that the first printed mention of it was in 1903 in the Bulletin de la Société Géographique du Cher, but does not give the author’s name:

“It is almost 8pm, and our stomachs are growling. Fortunately, right across from the train station stands the Hotel Tatin, built and outfitted with all the modern comforts for the enjoyment of Parisians who lease all the hunting estates around. The staff has been awaiting us, and the dinner menu, once read, brings forth a swell of excitement: it is extraordinarily bountiful and almost worth sharing here for the illumination of future generations; the dinner is unquestionably superb, and topped off, at our insistence, by a warm apple tarte that is the speciality of the house, and might rightfully qualify for a patent… along with official endorsement, for as long as Miss Fanny Tatin minds the stoves. This incomparable treat, famous all over Sologne, is an invaluable asset to the economic geography of the region. Since it is late in the winter, it is also the last tarte Tatin of the season for the hotel, which makes it taste like a slice of history.”

More than a century later, the tarte Tatin is more famous still, and throughout the world, with thousands upon thousands of chefs and home cooks having emulated it. I’ve made several versions myself, from apple to mango to red fig to quince.

But Bernard Munos, our historian-cum-fan of the demoiselles Tatin and their upside-down tart, serves up an even more delightful surprise for us. He unearthed what is purported to be the sisters’ actual original recipe, in the hand of the Tatin women’s friend Marie Souchon, which, says Munos, probably reflects Souchon’s first-hand observations in their very kitchen.

The ingredients are simple: apples, sugar and butter for the contents; flour, butter, and water for the dough.

The apples are King of the Pippins or calville [a French variety, misspelled in the recipe].

The apples are not peeled, challenging a now common practice.

The dough is of a flaky type, without sugar.

There is no cinnamon, vinegar, whipped cream, raisins, calvados (applejack), or puff pastry.

The tarte is served warm, by itself. DM/TGIFood