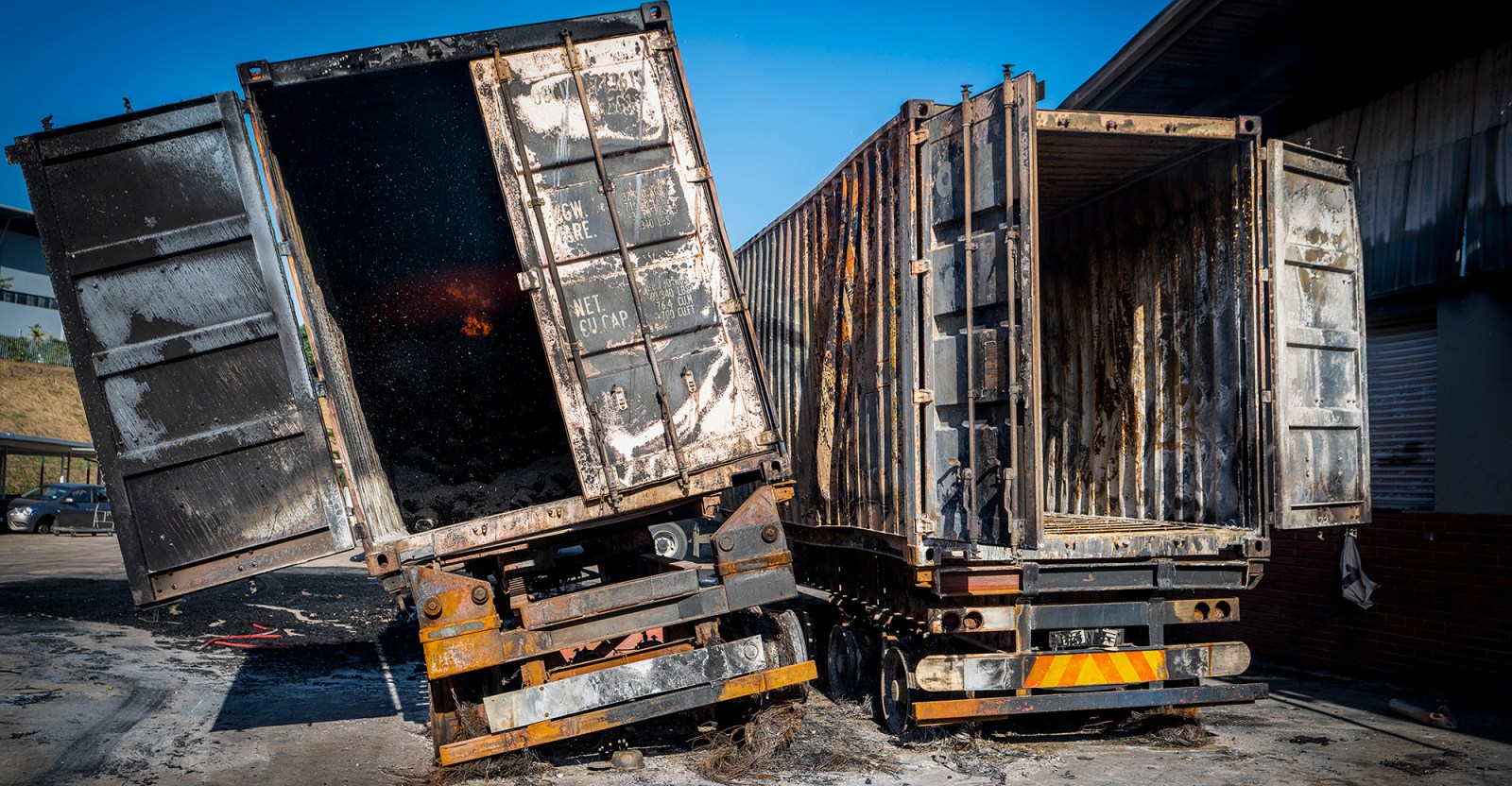 Burnt out containers in a business park off the N2 on Sunday 18 July 2021 following looting and unrest in the aftermath of the arrest of former president Jacob Zuma. (Photo: Shiraaz Mohamed)

‘There were no police. Metro confirmed to me there was no public order policing. I have no idea why. By then the commissioner and some of his other generals were not answering their phones, their phones were off,’ Durban Chamber of Commerce and Industry CEO Palesa Phili testified in Umhlanga on the fourth day of the South African Human Rights Commission hearings into the July unrest.

KwaZulu-Natal’s provincial police commissioner and his generals were “nowhere to be seen” for several days during the July riots that devastated the province, according to the CEO of the Durban Chamber of Commerce and Industry, who said eThekwini’s metro police had to try to handle thousands of looters within the city’s jurisdiction because of the seeming abdication of the South African Police Service (SAPS).

Palesa Phili detailed on Thursday how she was so desperate to find any kind of intervention to stop the rampant stripping of industries, corporates and businesses that she and Melanie Veness, the CEO of the Pietermaritzburg and Midlands Chamber of Business, who testified earlier on Thursday, eventually placed a call to Police Minister Bheki Cele on Monday, 12 July, but even his promise that the defence force was on its way to the province to quell the destruction materialised only “two or three days later”.

Phili was testifying on the fourth day of the South African Human Rights Commission (SAHRC) hearings into the unrest, at the aha Gateway Hotel in Umhlanga. She was joined by the chamber’s manager for policy and advocacy, Yolan Nagoor.

The chamber — which represents 3,000 members from the formal and 45,000 from the informal sector — was one of the first roleplayers in eThekwini to issue a statement while the unrest was taking place that condemned the violence and warned of repercussions to the economy, lives, and livelihoods.

The riots have been estimated to have cost the national fiscus R50-billion, with R20-billion of that in eThekwini. The violence spread to Gauteng, where it was less extensive and more quickly contained.

Phili told the panel of commissioners that she had spoken to Lieutenant-General Nhlanhla Mkhwanazi late in the evening of Friday, 9 July via phone, when trucks were being torched and looted along the N3.

When she spoke to him on Saturday, 10 July, his view was allegedly that “the only way [the looting could be] controlled was if the province was declared a State of Emergency”.

Phili said she told Mkhwanazi that she would push for this.

That did not happen. Instead, KwaZulu-Natal citizens had to endure eight days of rampant criminality that led to the deaths of hundreds of people.

Expanding on why it was important that the N3 route was cleared, Phili said: “Some of the big corporates we represent send about 200 trucks on a daily basis to leave the province. Our main concern was to make sure that the N3 by Mooi River was cleared, as that was outside the jurisdiction of eThekwini.

“Riots happen all the time, but when the N3 is closed, it is a direct threat to the members of the Durban chamber.”

The N3 is the main route between Durban and Johannesburg, and also into the SADC region. Once the route is obstructed, trucks pile up for kilometres and, as in the case of the July riots, supplies cannot reach KwaZulu-Natal. Shortages of medicine and food in the province were common during and after the unrest, with bread being rationed and sold for up to R50 per loaf by corner shops that were not looted.

The riots followed the jailing of former president Jacob Zuma on contempt of court charges. Zuma was rushed to the Estcourt Correctional Centre in the early hours of Thursday, 8 July. That evening, journalists were already receiving reports of trucks being torched and outbreaks of sporadic violence throughout the province.

Zuma was released on medical parole after serving a fraction of his 15-month sentence.

“When I got hold of the commissioner [on Saturday] afternoon he was honest and said the situation was out of control. Most of my members with retail shops across malls were frantic, because their shops were being destroyed,” Phili told the hearing.

She said the chamber lobbied hard for the defence force to be sent to the province, and for soldiers to be provided with food, accommodation, cars and petrol.

It was obvious that everyone in the government was “overwhelmed” by what needed to be done, she said, while on social media, threats were being made about attacks on water reserves and electricity stations.

From what she understood, said the CEO, “law enforcement would be [based] at national key point areas and private security had to protect private businesses”.

“There were no police. Metro confirmed to me there was no public order policing. I have no idea why. By then the commissioner and some of his other generals were not answering their phones, their phones were off.”

By Monday, thousands of looters were in full force, arriving in cars or on foot and vandalising, stripping and torching businesses, warehouses, malls and factories.

When she did get hold of Mkhwanazi again, Phili said she did not ask him why he had not responded.

“The July riots brought out the biggest fears of our members in terms of law enforcement to deal with crime in our country,” she told commissioners.

The reality was, said Phili, that South Africa may have the best Constitution in the world, but there was a failure to protect community and businesses — even before the unrest.

“We also came to the realisation that as a province, that with the private security and law enforcement, there was no collaboration, no working together.

“The magnitude [of the July riots] was not expected, of course, so from the manpower on the ground to the equipment that could have prevented this, we were almost crippled. The city and provincial economy are [still taking] serious strain.”

Commissioners will on Friday conduct in loco inspections in Phoenix and Pietermaritzburg, where it is alleged that racially motivated violence took place during the unrest.

The commission has said it is expecting police, ministers, the KZN premier and others to testify in the coming weeks. DM