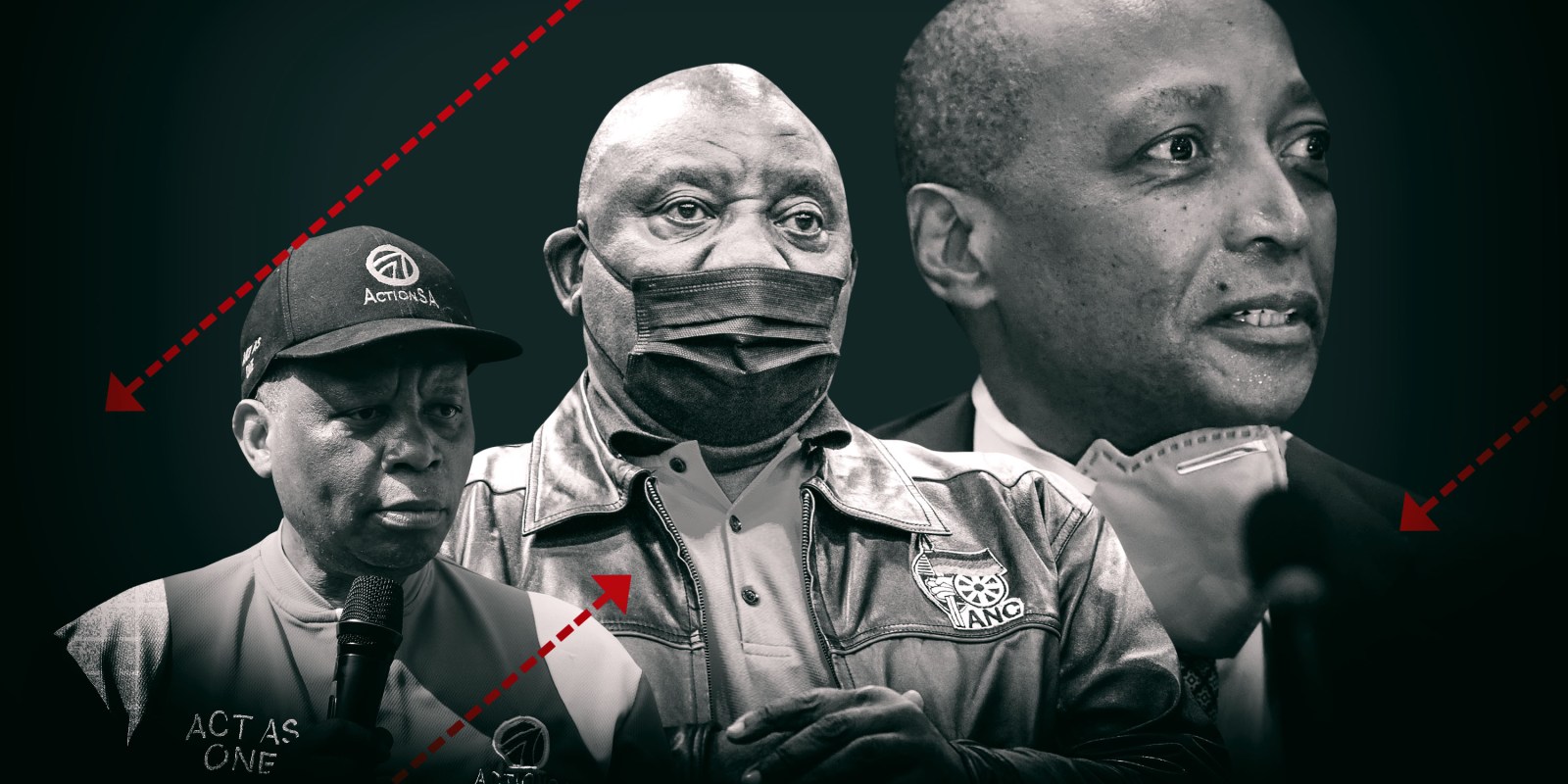 Donations received by political parties during the period of April to June 2021 have now been disclosed to the IEC — or, rather, some of them. The EFF is yet to declare a single large donation, while the second set of disclosures sees ActionSA and the ANC raking in the largest quantum.

The second set of disclosures of the amounts donated to South African political parties has been published — and reveals that cumulatively so far, the ANC has received more money this year than any other party.

But it also reveals that in times of need, the ANC continues to rely on three financial sources: the ANC’s investment arm Chancellor House, billionaire Patrice Motsepe and President Cyril Ramaphosa’s personal fortune.

Taken together, those three sources contributed R21,219,969 to the ANC’s pre-election coffers, with by far the largest portion (R15-million) coming from Chancellor House. 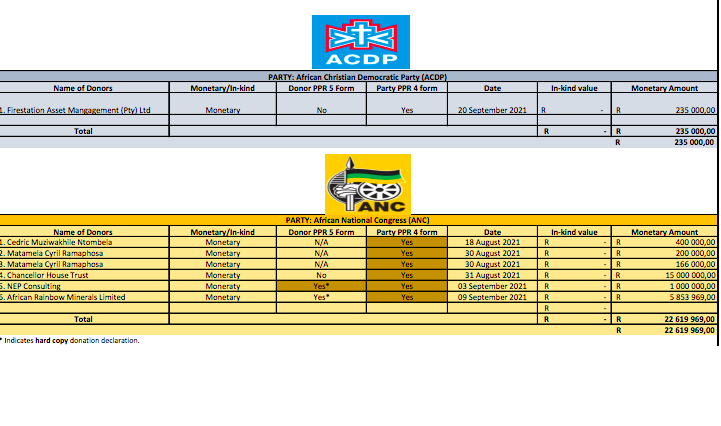 The DA has already indicated its unhappiness with this, since Chancellor House can receive donations without disclosing their source and then pass them on to the ANC. In other words, although the ANC has disclosed R15-million from Chancellor House, we have no idea where that R15-million came from.

This is not the DA’s only concern about the second set of disclosures, which, like the inaugural set, is as noteworthy for what it doesn’t say as for what it reveals.

Once again, Julius Malema’s Economic Freedom Fighters have not disclosed a single donation over R100,000 — which, given the elaborate nature of the EFF’s election campaign, is widely considered implausible.

Questions are also being asked once again about the failure of the Freedom Front Plus to disclose.

When publishing the disclosures, the IEC noted that “the onus rests on both political parties and entities making declarable donations” to disclose, and said it “entreats” all registered parties to disclose: a stance which seems increasingly toothless.

There are, however, three further parties that made disclosures this time around — an improvement on the first set, in which only the ANC, the DA and ActionSA disclosed. 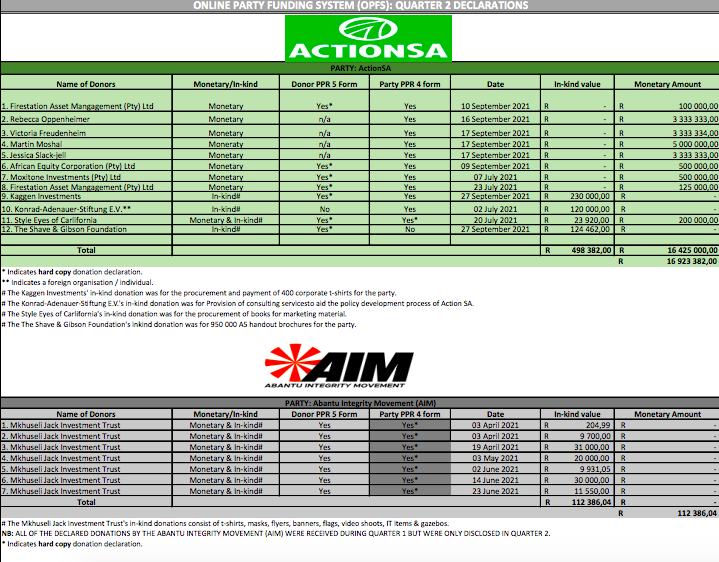 The Abantu Integrity Movement (AIM), the African Christian Democratic Party (ACDP) and the Good party all disclosed small donations, with the IEC noting that AIM’s donations were actually received in the first quarter of 2021, but only disclosed now. The IEC indicated that “a directive has been issued against the party” as a result.

One of the reasons why the IEC seems so powerless to act meaningfully against noncompliant parties is because the major punitive tool at its disposal — allowed for in the funding legislation — is to withhold funds from the Multi-Party Democracy Fund. Once again, however, it appears that donations to this fund are not exactly streaming in. The first time around, only one donation of R2,000 was received; on this occasion the IEC did not give details, but stated that donations “have not reached the minimum threshold of R1-million”.

The second set reveals that both ActionSA and the DA continue to attract healthy donations. Cumulatively, the DA has received the greatest quantum of donations for any opposition political party this year, raking in a total of almost R33-million combined in disclosed donations over the first two quarters. This puts it just behind the ANC, which has disclosed around R33.3-million so far in 2021.

In third place is Herman Mashaba’s ActionSA, which has disclosed a total of around R20.2-million over the two quarters.

The second set of disclosures also reveals that the DA and ActionSA are jostling for the largest part of their funding from a very small group of rich individuals: namely, members of the Oppenheimer family and the Durban-born tech entrepreneur Martin Moshal. 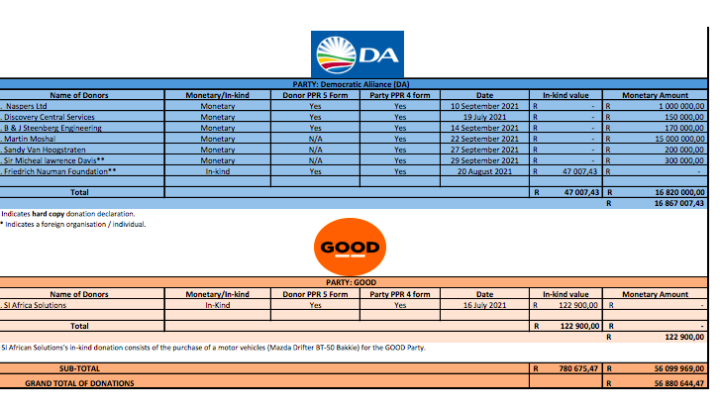 While the funding legislation prohibits donations larger than R15-million from a single source to one party over the course of a year, there is nothing to stop a single source from giving R15-million to multiple different parties, as Moshal looks set to do.

Perhaps the most revealing disclosure sets will start coming in midway through 2022, which will cover donation periods after the 2021 local government elections. It will be interesting to see what kind of a drop in donations is witnessed after the campaigning season and whether ActionSA’s donors consider the party’s 1.8% performance nationally in the local government elections a reasonable return on investment.

The DA, meanwhile, has indicated that it is rapidly running out of patience with the IEC’s softly-softly approach to enforcing the funding legislation.

If the IEC “does not up its game”, the party said on Thursday afternoon, “the DA will seriously consider withholding any further disclosures”. DM