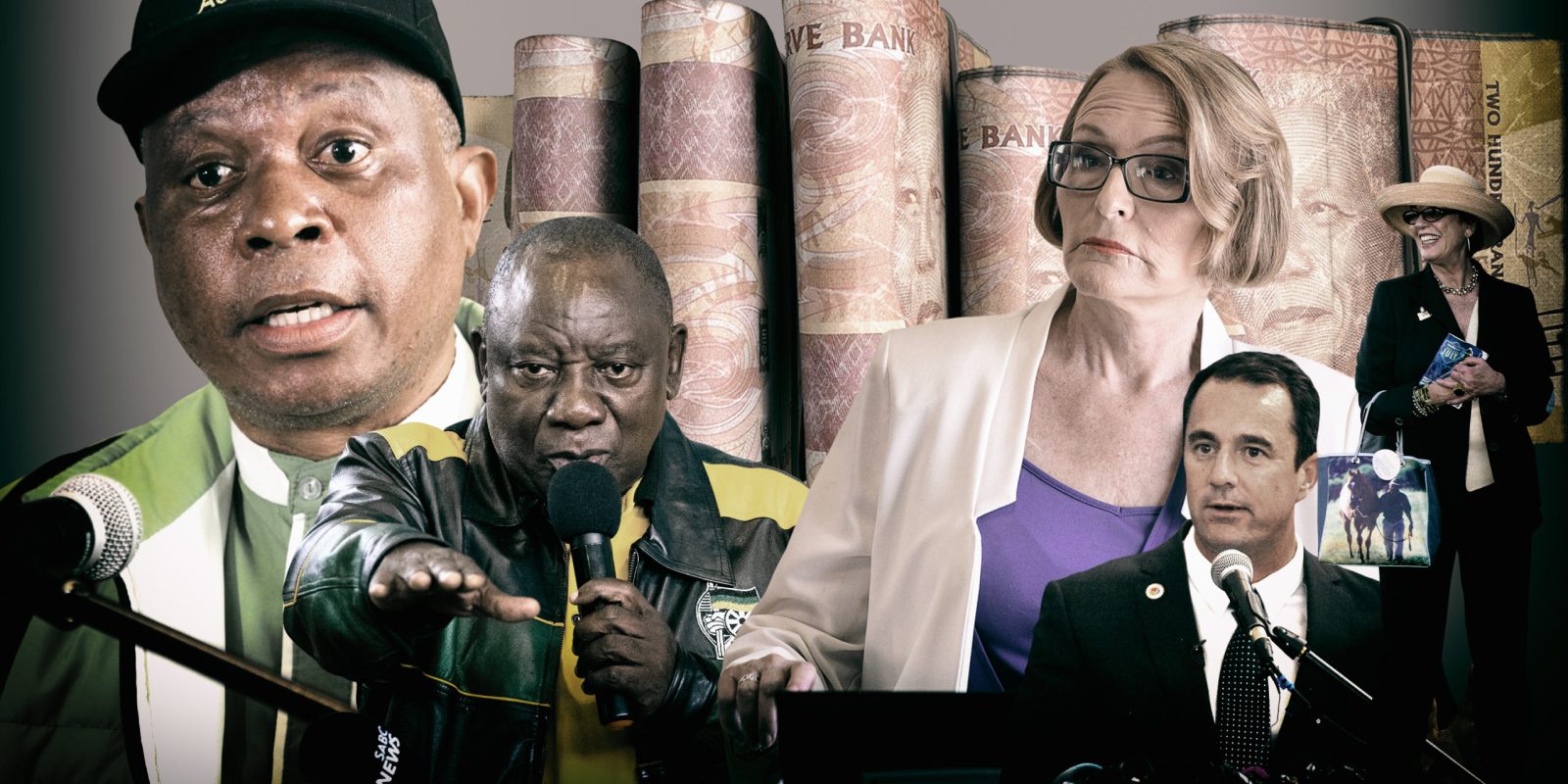 The first declarations of political party funding are in — and are as interesting for what they don’t say as what they do. They suggest that the DA is the only party still able to rely on wealthy individuals for massive donations, while questions must be raised about the non-disclosure of the EFF and possibly other parties too.

Anyone hoping that South Africa’s first published records of political party funding would provide a revelatory key to the levers of power in this country was in for a disappointment.

When the IEC released its first-ever political party funding report on Thursday, it turned out to contain ledger entries for just three parties: Herman Mashaba’s Action SA, the DA, and the ANC. That is because those are the only parties to disclose having received donations of more than R100,000 between April and June 2021. 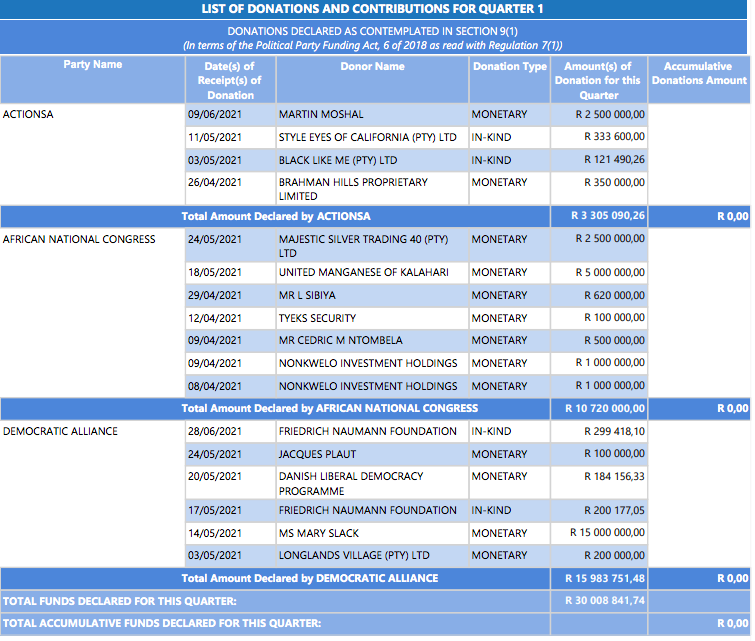 The most eye-popping donation was certainly the R15-million recorded as having been given to the DA by Mary Slack. This was by an order of magnitude the largest donation in the report. The 77-year-old Slack is the daughter of Harry and Bridget Oppenheimer, the mining tycoons who have a long history of funding liberal politics in South Africa.

It’s worth noting that R15-million is now the ceiling for donations by a single donor within a year, so Slack’s purse will be closed to the DA until 2022. Of course, there are probably as many ways of overcoming this regulation as there are loopholes in the tax system: another member of Slack’s family, for instance, could presumably make their own donation without issue.

This laxity would seem to be a problem for the reporting system as a whole.  Then again, the architects of the legislation faced a difficult task in creating a legal framework that did not totally dissuade donors. As it is, the ANC claims to be in financial difficulties due to funders pulling out as a result of the new act.

Even allowing for the R100,000 threshold, and the ways of circumventing reporting, and the fact that the reporting period is only three months in duration, it should still raise eyebrows that only three parties claim to have received this quantum in single donations. The IEC stated that “not all political parties responded” to the reminder to submit declarations, and it appears from the IEC’s wording that not even all the political parties represented in Parliament — in other words, the biggest ones — responded.

What will happen next? There was no publication by the IEC of the names of parties that simply did not respond to the request of declarations. And one of the main sanctions available to the IEC — that such parties will not benefit from funding from the Multi-Party Democracy Fund — has now been revealed to be utterly toothless.

In a tragicomic turn of events, it emerges that just one donation of just R2,000 was made to the Multi-Party Democracy Fund, by former Idasa boss Paul Graham. This is a far cry from what the legislation’s drafters had in mind: which was that corporate South Africa, in particular, would queue up to deposit millions into the fund for distribution among all represented parties. In this way, these corporates could not be accused of playing favourites politically.

Instead, precisely one person in the entire country has heeded the call. While the IEC “would like to make an appeal to the South African public and corporates alike, to open their purses and support multi-party democracy”, it appears that the general appetite for giving money to political parties at large, in a non-targeted manner, is extremely low — and nobody should be surprised by that, in the current polarising climate.

It does mean, however, that the threat to parties who fail to cooperate with the reporting regulations — that they will miss out on the multi-party funds — is now meaningless. So how, in real terms, will the IEC enforce the law? The commission still has other sanctions at its disposal, including administering fines via the Electoral Court, but on Thursday there was no indication that the IEC planned to follow up on any possible non-disclosures.

Among the parties that questions should be asked about: on opposite ends of the political spectrum, the EFF and the Freedom Front Plus. The EFF is known to have had big-money donors in the past like tobacco trader Adrian Mazzotti, while it seems unlikely that the FF+ does not have a few billionaire Afrikaners in its contacts list.

Of the funding reports we do have access to, it is interesting to see that Action SA is bringing in some relatively large donations. If nothing else, it suggests a buzz around the party which could translate into more votes in the November local government elections than one might expect.

Action SA’s main donor is revealed to be Martin Moshal, a massively wealthy Durban-born entrepreneur who reportedly holds more than 45 patents worldwide and has been an investor in numerous tech startups. Moshal was exposed by the British press in 2020 as an investor in controversial online gambling giant Betway. He is described as also having made “significant contributions to Israel” in terms of both philanthropy and tech investments.

On the ANC side, the party’s staff, who have been suffering from delayed salaries and inadequate UIF contributions, may be eyeing the R10,720,000 brought in between April and June with some interest. Absent in the short list of ANC donors during this time is the name of one Cyril Matamela Ramaphosa, who at various points has been assumed to be bailing out his party from his personal fortune.

Ramaphosa would not have to disclose a donation of over R100,000 if he made one in his personal capacity, because only “juristic persons” have to disclose donations — in other words, companies — and not “natural persons”. The donation would still have to be disclosed from the ANC’s side, however.

The ANC’s two largest donors — companies called Majestic Silver Trading and United Manganese of Kalahari — are linked entities that are part-owned by the ANC’s own investment vehicle, Chancellor House. United Manganese is 49% owned by Russian oligarch Viktor Vekselberg’s Renova Group — meaning that the ANC is receiving part of its funding indirectly from Russia with love.

Because this is the first political party funding report, we have no way of knowing whether the figures listed as donations are roughly representative of all quarterly periods, or whether the funding drastically fluctuates. From that perspective, the second report in a few months’ time may be additionally revealing. DM

CORRECTION: This article originally stated that it would be possible for a donor to give R99 999 to a party every three months and stay invisible. This is incorrect: any donor who gives over R100 000 cumulatively in a financial year must be declared.