Protecting voters’ interests: What is needed to keep coalitions in check 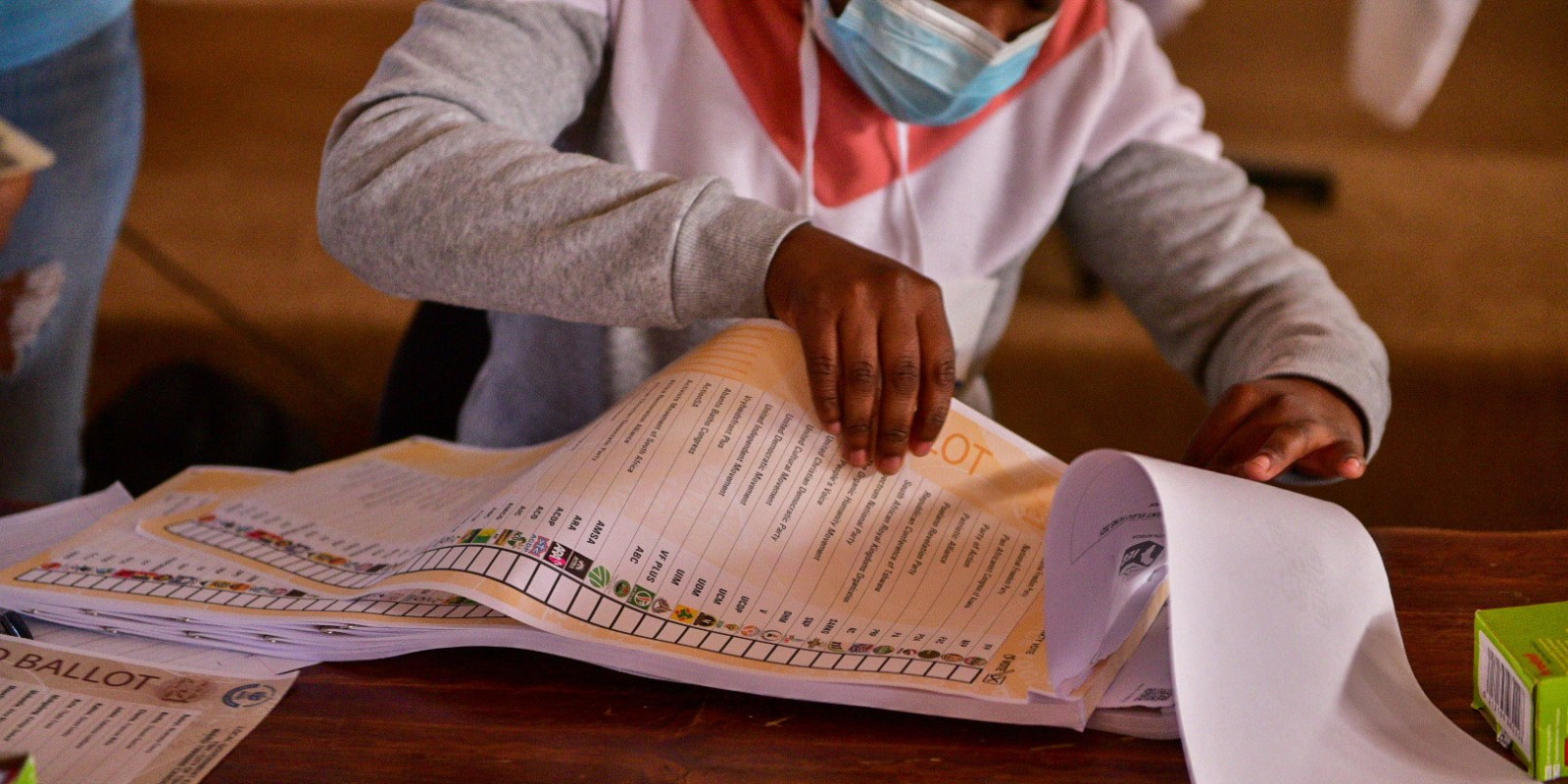 An IEC official prepares a ballot in Pretoria during the 2021 local elections on 1 November 2021. (Photo: Gallo Images / Alet Pretorius)

While it may be impossible to fix the political dysfunction at the heart of coalition politics in South Africa, there may be ways to improve the accountability of political parties which enter into power-sharing arrangements.

Last week’s local government elections produced 66 hung councils in which no party won a majority of seats. Political parties have two weeks to agree on the formation of coalition (or minority) governments, before the election of mayors must take place. But the coalitions or minority governments formed after the 2016 municipal elections largely served the interests of politicians, instead of the voters who elected them.

In Johannesburg and Tshwane, the DA at first formed a minority government, relying on the informal support of the EFF to remain in power and pass budgets, an inherently unstable arrangement that contributed to severe governance problems in both metros.

It is all rather depressing. The instability of many power-sharing arrangements between parties after the 2016 election suggests that, when confronted with the choice, many South African politicians (particularly those elected to municipal councils) will act in their own financial and political self-interest or in the short-term interest of their political party, rather than in the best interests of the voters who elected them.

While it may be impossible to fix the political dysfunction at the heart of coalition politics in South Africa, there may be ways to improve the accountability of political parties that enter into power-sharing arrangements, to make it easier for voters to punish political parties who abuse the system.

Adopting a legal framework within which coalitions would be required to operate is one possibility to look at — although one should be mindful of the fact that lawyers sometimes wrongly believe that law can fix a broken political culture. Such a framework would require political parties who plan to work together to demonstrate that they are likely to enjoy a working majority in a council to pass important legislation and to function as a government, as a precondition for forming a government.

In such a system, a hung council would only be permitted to meet to elect an executive mayor once a group of parties have submitted a formal (and credible) coalition or confidence-and-supply agreement that meets basic criteria, and sets out agreement on a list of specific issues.

As I explained in a chapter in the recently published book, Marriages of Inconvenience: The Politics of Coalitions in South Africa, these kinds of agreements are contracts, through which parties commit themselves to cooperate in such a way that when they go through unpleasant situations, party leaders have a mechanism by which they can resist temptation or intra-party pressure to renege on their commitments.

As it is usually easier to get party regulars to approve concessions to coalition partners when they are included in a package deal, a coalition agreement may also reduce the potential destabilising impact of small “kingmaker” parties.

In the case of formal coalition agreements, parties that form the coalition will have to agree on how many and which executive posts would be held by which party and on a shared policy agenda, set out in a formal partnership agreement. Such an agreement could include procedural safeguards, creating formal mechanisms to facilitate inter-party consultation between coalition partners and resolve disputes between them.

One difficulty with this proposal is that some person or body would have to vet the agreement submitted to ensure it complies with the minimum requirements set out in law, before giving the go-ahead for the election of an executive mayor by a hung council. Unless such a person or body is scrupulously impartial, the system could be manipulated to the advantage of some parties and the disadvantage of others.

Another problem is that the law requires that the election of mayors must happen within 14 days after the election is declared. But comprehensive coalition agreements can take many weeks or months to conclude, so unless the 14-day requirement is relaxed, many councils may end up without a government, which would require fresh elections.

But the principle that coalition or confidence-and-supply agreements by political parties should be made public, and that such agreements should contain details of the exact allocation of positions and benefits to different coalition partners, as well as the shared policy agenda of the coalition, is a salutary one. It is promising that the EFF has said it would require that agreements reached with coalition partners be published to avoid perceptions that they were signing secret agreements among themselves.

Such transparency will place voters in a better position to evaluate the conduct of political parties which enter coalition agreements and to hold political parties and elected representatives accountable if it becomes apparent that an agreement was reached with the sole or main aim of securing positions and access to patronage for a specific party and its elected representatives.

Here the media also has an important role to play. In the past, much of the reporting on coalition agreements focused disproportionately on the allocation of positions to the elected representatives of the political parties, and on whether the parties working together will be able to muster sufficient votes to get their preferred Speaker and executive mayor elected. While the stated preconditions of political parties to enter coalition agreements are widely reported on, once an agreement has been reached we seldom hear about any policy agenda or programme of action agreed to by coalition partners.

This may be partly because, in the past, political parties themselves often focused largely on the allocation of positions and other benefits to coalition partners, and not on an agreed policy agenda and programme of the coalition. If this happens, voters need to know about this, as it may influence their view of a particular political party and, in an ideal world, will allow voters to punish political parties whose elected representatives seem to be more worried about what they could personally gain from entering a coalition, than on serving the voters who elected them.

I am assuming that political parties and elected representatives will act in a more responsible and less selfish way only if it is in their own interest to do so, and that this will only happen if voters are in a position to punish political parties whose elected representatives sell their support (and their souls, if any) to the highest bidder to gain some financial or other benefit.

The more transparent the process, and the more scrutiny by the media of whether political parties who form a coalition have bothered to formalise a policy agenda and programme, and if they did, what this entails, the more likely that voters will punish those parties which are not able to hide the fact that they are only it for themselves.

It is also important that political parties and their elected councillors who dump their coalition partners to join a different coalition are subjected to intense scrutiny and probing questions about the specific benefits (if any) such a new coalition will bring for voters.

It is odd that parties who jump from one coalition to another to gain some personal advantage for their councillors are so seldom subjected to the kind of critical scrutiny that would expose their callousness and greed.

Of course, even radical transparency about coalition agreements and more scrutiny of such agreements will not magically turn political parties into altruistic agents whose only aim is to serve voters. But, ideally and over time, it may contribute to a political culture in which political parties will be forced to consider the best interest of voters out of fear that those voters will punish them at the next election. DM

Pierre de Vos teaches constitutional law at the University of Cape Town law faculty, where he is head of the Department of Public Law. He writes a blog, Constitutionally Speaking, in which he attempts to mix one part righteous anger, one part cold legal reasoning and one part irreverence to help keep South Africans informed about constitutional and other legal developments related to the country’s democracy.