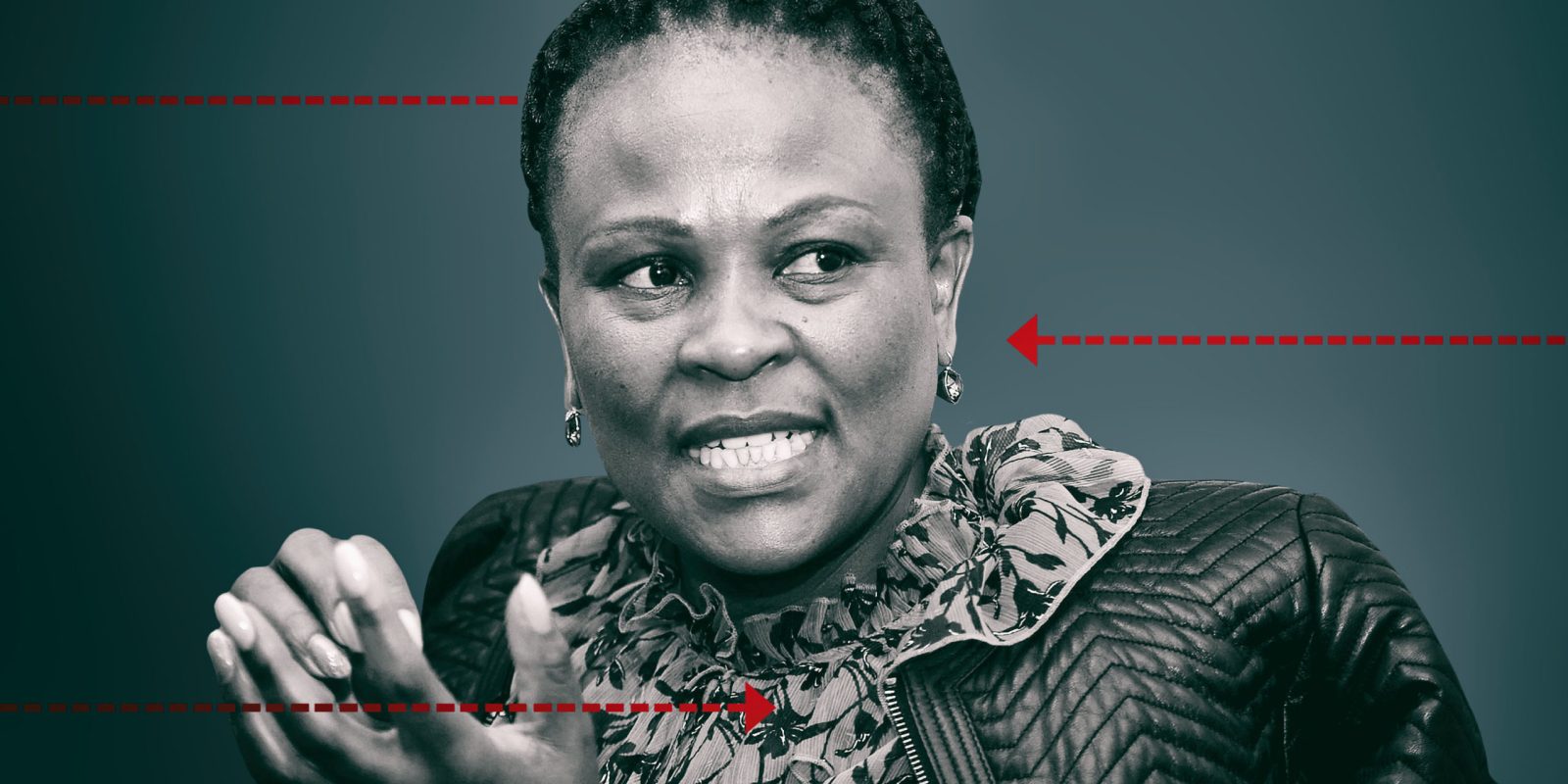 Three courts. One year. One rule. Until the legal wrangling is resolved over the National Assembly rule to remove from office the bosses of the constitutional institution supporting democracy, the parliamentary Section 194 impeachment inquiry against Public Protector Busisiwe Mkhwebane remains suspended.

Monday’s legal arguments before the Constitutional Court were to request direct access for the National Assembly to appeal against the Western Cape High Court declaring unconstitutional two parts of Parliament’s 17-step impeachment rules. But the additional twist is that the Public Protector is also pursuing a cross-appeal, because the lower court did not uphold all her attacks on the parliamentary rule.

If the Constitutional Court decides to grant direct access, the next step is to hear the case – depending on the court roll, it could be later this year, but more likely in early 2022 – and to deliver judgment. If the Constitutional Court declines direct access, the National Assembly is on record that it will go to the Supreme Court of Appeal, which is set to unfold only in 2022.

In his 18 August 2021 affidavit to the Constitutional Court, the then acting National Assembly Speaker Lechesa Tsenoli – the 5 August Cabinet reshuffle had taken Thandi Modise from Parliament to the defence ministry – indicated his recommendation for the impeachment inquiry to suspend proceedings, “pending the outcome of the present application for leave to appeal and, if leave is granted, the decision on the appeal is made by this honourable court or the Supreme Court of Appeal, as the case may be”.

Central to Monday’s Constitutional Court arguments are two points, including the possible participation of a retired judge in an independent panel that would make recommendations to Parliament on whether a case existed for MPs to proceed with an inquiry.

The other, perhaps more contested point, is the extent of legal representation – and whether in parliamentary impeachment proceedings the Chapter 9 institutions’ bosses can let their lawyers speak for them, make representations for them and even object to questions MPs may ask.

This all arises from the July Western Cape High Court full Bench judgment that, in an unprecedented move, actually rewrote parliamentary rules. Previously, when parliamentary rules were found wanting, the national legislature was given time to fix the defect itself.

The clause “provided that the legal practitioner or other expert may not participate in the committee” was deleted from parliamentary rule 129AD which allows legal representatives to assist heads of Chapter 9 institutions facing impeachment.

The clause “which may include a judge” was deleted from parliamentary rule 129E in this Western Cape High Court judgment on the argument that judges must avoid political controversies.

“I do not suggest that it is time for judicial officers to retire to ivory towers. I do, however, suggest that the judiciary would be well advised to steer clear of a process so politically charged in which its involvement adds no value other than expediency,” ruled Judge Elizabeth Baartman in the 28 July 2021 judgment.

That court ruling dismissed the other points Mkhwebane had raised, including that the parliamentary impeachment rules can only apply from the date the rule was in place and her right to be given reasons for steps and actions on demand. Hence the conditional cross-appeal.

Monday’s Constitutional Court hearing is the latest in a five-year saga that has cut across two Parliaments, separated by the May 2019 elections, and three court hearings over the past year.

It’s been a matter steeped in politics.

Right from the start, in September 2017 when the DA brought its first complaint to Parliament’s justice committee, the requests to remove Mkhwebane from office played into the factionalised politics of the ANC, particularly in the run-up to its 2017 Nasrec national conference.

In 2020 it came to the point where the then Speaker Thandi Modise agreed that a renewed DA motion brought under the new rules should be processed.

In October 2020 Mkhwebane lost her bid to interdict the impeachment process that finally got under way earlier in 2020 after the National Assembly on 3 December 2019 adopted the impeachment rules for heads of Chapter 9 institutions, officially known as  “Removal of Officer Bearers in Institutions Supporting Constitutional Democracy”.

It was in the public interest and within Parliament’s oversight and accountability mandate to hold to account those heads of constitutional institutions supporting democracy it has a part in selecting, according to Judge Vincent Saldanha then.

In November 2020 the independent panel based on recommendations by political parties was established. In late February 2021, it delivered its recommendation – yes, the National Assembly had grounds to institute removal proceedings.

In mid-March 2021, the National Assembly agreed and passed a motion to establish such an impeachment inquiry, which in April was taking shape. By July 2021, some 17 months after the DA motion for the removal had been submitted, that Section 194 inquiry committee decided its draft programme – the inquiry would be wrapped up with recommendations to the House by mid-January 2022.

But then the focus was back to the Western Cape High Court, which in June 2021 heard the Public Protector’s direct challenge to the rules.

(As an aside, the Public Protector is only one of the Chapter 9 institutions, which include the Auditor-General, the Electoral Commission of South Africa, the South African Human Rights Commission, Commission for the Promotion and Protection of the Rights of Cultural, Religious and Linguistic Communities, and Commission for Gender Equality.)

That court case resulted in the July judgment which declared parts of the parliamentary impeachment rules were unconstitutional – and in mid-August 2021 the National Assembly programming committee kicked the impeachment inquiry down the line.

On Monday the focus turned to Constitutional Court arguments.

There, advocate for Speaker Nosiviwe Mapisa-Nqakula, Andrew Breitenbach SC argued that Chapter 9 heads are accountable to Parliament, according to the Constitution, and as such parliamentarians wanted “personal accountability” from those the national legislature had a say in appointing.

“They [Chapter 9 heads] may be assisted by a lawyer, but they must speak for themselves,” said Breitenbach.

Arguing for the DA, advocate Steven Budlender SC said it was at least permissible for a retired judge to be on an advisory panel; commissions of inquiry, for example, are always chaired by judges.

And Budlender pushed for urgency in this matter as Parliament is effectively stalled from finalising this matter until the legal wrangling about the rules is concluded.

Arguing for the Council for the Advancement of the South African Constitution and Corruption Watch, the two friends of the court in this matter, advocate Michelle le Roux said political contestation was not a reason not to take up a certain task.

But advocate Dali Mpofu SC, representing the Public Protector, argued that while the rules were styled as applicable to all Chapter 9 institutions, they actually targeted this Public Protector.

The argument centred on how these parliamentary rules unlawfully allowed the appointment of a judge, blurring the separation of powers, while “taking away” the right to full legal representation. Mpofu remained on track even as Constitutional Court judges in different ways highlighted that beyond criminal proceedings the right to legal representation was not absolute.

The Constitutional Court should not grant Parliament direct access, said Mpofu. “No reason has been given why the Supreme Court of Appeal should be bypassed.”