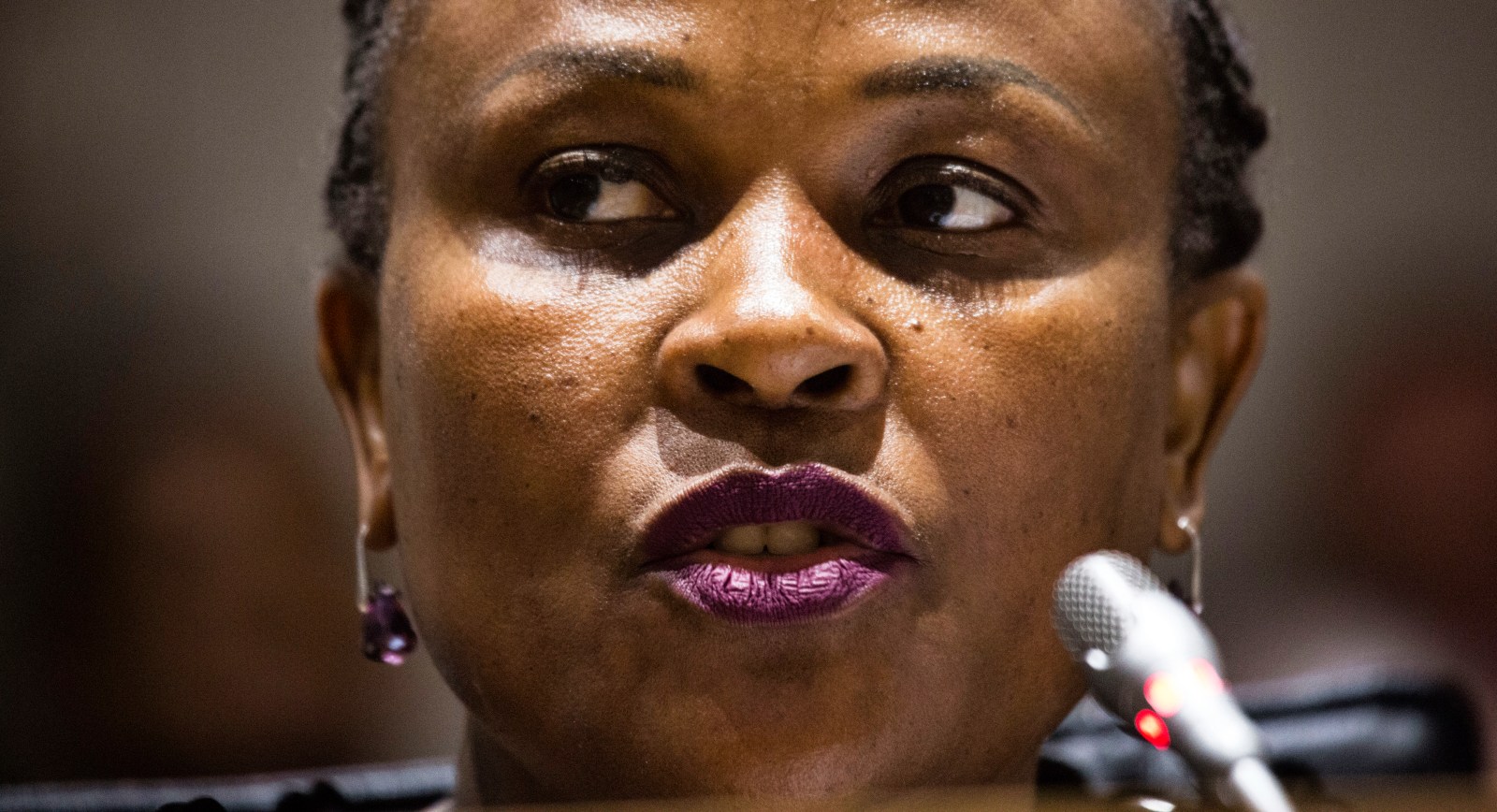 Public Protector Busisiwe Mkhwebane’s appearance before Parliament’s justice committee on Wednesday left more questions than answers. Still, she enjoyed the benefit of protection from parliamentary politicking, and kicking down the road a decision on an inquiry into her removal from office.

Wednesday’s justice committee meeting was a topsy-turvy affair. It wasn’t Public Protector Busisiwe Mkhwebane who was present during MPs’ discussion of the complaint about her (un)fitness for office as justice committee chairperson Mathole Motshekga last week insisted must happen on the principle of fairness. It was DA Chief Whip John Steenhuisen, the complainant, briefing MPs, although a week earlier Motshekga insisted the author of the call for the public protector’s removal from office was immaterial.

Sometimes what happens in public in Parliament has much to do with the intricacies of parliamentary politicking – be it across the institution, among political parties within a committee or even within the ANC study group component of that committee, or a combination of all the above.

Motshekga would have been reminded that National Assembly Speaker Baleka Mbete had referred Steenhuisen’s complaint to the justice committee to deal with.

From the official minutes of the weekly programming committee of 3 May and 10 May it emerged that the House Chairperson for Committees, Cedrick Frolick, had raised the delay with Motshekga, while indicating that the expectation was for Steenhuisen to be afforded an opportunity to make representations. In the programming committee of 17 May, the minutes indicate, Mbete undertook to take the matter up with the justice committee chairperson.

That it had come to this raises questions as to how Motshekga sees himself doing his job and what, if any, agendas are at play. Just as ANC factionalism plays out in provinces and regions, the parliamentary ANC caucus is not on the same page, public pronouncements of unity notwithstanding.

But Mbete had made a referral. And so Steenhuisen got the opportunity to make presentations.

“Let’s not eat on the time the Speaker has allowed us to listen to the Honourable Steenhuisen,” said Mathole.

Much of the DA chief whip’s submission related to the scathing comments on Mkhwebane’s conduct and findings by a full Bench that in February 2018 set aside her report finding that ABSA had to repay R1.125-billion for the apartheid-era Bankorp bailout. Following the report’s release in June 2017 both ABSA and the South African Reserve Bank (SARB) applied for a review to the court, which expressed its dissatisfaction with Mkhwebane’s conduct by issuing a personal cost order.

In 2017 SARB approached the courts for an urgent interdict regarding Mkhwebane’s finding that instructed Parliament to change the Constitution. The public protector dropped her opposition in this matter, acknowledging only that the national legislature could decide on it. The judge’s comments, including that the public protector had taken one side in the public debate, were scathing.

But it was on this matter that the inter-party politicking came out. ANC MP Loyiso Mpumlwana, widely associated with the Zuma grouping in the run-up to the ANC December 2017 national conference, put it to Steenhuisen like this:

“SARB illegally gave a bailout. She (Mkhwebane) is saying ABSA must pay back the money because they were corrupt. As a person opposing corruption, you must give some marks to her. Here’s someone who’s clearly fighting corruption. She might make some mistakes (in processes).”

In some ways Mpumlwana picked up earlier sentiments from Motshekga that the public protector is facing the brunt of criticism while having been let down by everyone else.

“There’s no fault of ours… You are being let down by other institutions of government,” was his conclusion after a more than two-hour session with Mkhwebane on the policies of her office, particularly the appointment of her special adviser, Sibusiso Nyembe.

The Sunday Times earlier in June reported that Nyembe had been appointed from 1 April for three months at a level that comes with a R1.2-million annual salary. This after the dissolution of the governance advisory board that had advised the previous public protector free of charge.

Mkhwebane told MPs that Nyembe, a conveyancing attorney, had not necessarily been hired only for his legal skills, but for special skills in “socio-economic perspectives, theories of class… heterodox from the mainstream”. These were helpful in assisting her with the appeal against the personal cost order, and also with her office’s Vision 2023 document.

Nyembe’s three-month contract was signed even as the required consultations over appointment policy with either Finance Minister Nhlanhla Nene, or Parliament, had not been concluded.

Mkhwebane said there had been “no response” to the letter on this matter to National Assembly Speaker Baleka Mbete. And while the public protector said that, in response to her first letter in February, former finance minister Malusi Gigaba had only raised concerns over costs constraints, it also emerged that Nene on 6 June had indicated he could not support the policy and requested consultations afresh.

But Mkhwebane’s special adviser is already working, potentially with classified documentation, without the necessary security clearance.

“The forms have been completed,” explained Mkhwebane, adding that the delay was on the side of the State Security Agency (SSA).

It remains unclear why the former SSA analyst, who has since her appointment as public protector in October 2016 brought the SSA in to assist her office at various levels – that emerged in a previous justice committee meeting in April – has been unable to resolve the delays in Nyembe’s security clearance.

It was the committee questions on the appointment of this special adviser that indicated that not all of the ANC MPs were quite on the same page. ANC MPs Madipoane Mothapo and Gijimani Skosana pushed, but at one stage Mpumlwana questioned Mothapo’s persistent interrogation of Nyembe’s employment categorisation.

Deputy Public Protector Kevin Malunga sat silent as his boss instructed others from her office to respond to MPs’ questions. It emerged that Mkhwebane had written to Motshekga on 18 May regarding Malunga’s delegations, although that letter has yet to be distributed to committee members. But a hint with regards to Malunga’s status – in October 2017 it emerged he had been moved to training and capacity building – came from Mkhwebane’s explanation for the previous week’s no-show due to a last-minute “unforeseen family emergency”. Echoing her media statement then, she told MPs:

“I couldn’t send my deputy as I thought the issues, especially on the rules and policies of the office, required my special attention.”

A question from Breytenbach as to why she had been able to appear on national television on the same day she was meant to brief MPs was left unanswered.

There were bizarre moments during Wednesday’s justice committee meeting. It ticked the boxes, but ensured little, if any, progress.

Motshekga said there would be no decision on a possible inquiry to remove Mkhwebane from office until her responses were obtained in line with natural justice.

Strictly speaking there is no such obligation in law or the Constitution. But it does drag out the process on the complaint first filed by Steenhuisen in September 2017.

No deadline was set for Mkhwebane to respond to the committee in writing regarding the complaint.

It’s less than a year to the 2019 elections and Parliament is on an extended recess until mid-August, with another extended recess scheduled for January 2019 that will see parliamentarians back at the national legislature in early February, days before the 2019 State of the Nation Address.

Kicking for touch also had been the decision of the first of three ad hoc committees on the Nkandla debacle. Just before the 2014 elections, it decided it should be up to the incoming MPs to act.

After almost three years of an often politically charged process that manoeuvred through parliamentary procedure and protocol, the national legislature ultimately absolved then president Jacob Zuma from repaying anything for the non-security upgrades, as then public protector Thuli Madonsela found.

Parliament’s handling of the Nkandla saga led to a scathing Constitutional Court judgment that declared that the National Assembly had acted “inconsistent with the Constitution”.

Will the complaint against Mkhwebane, and the call for her removal from office, be a replay? DM