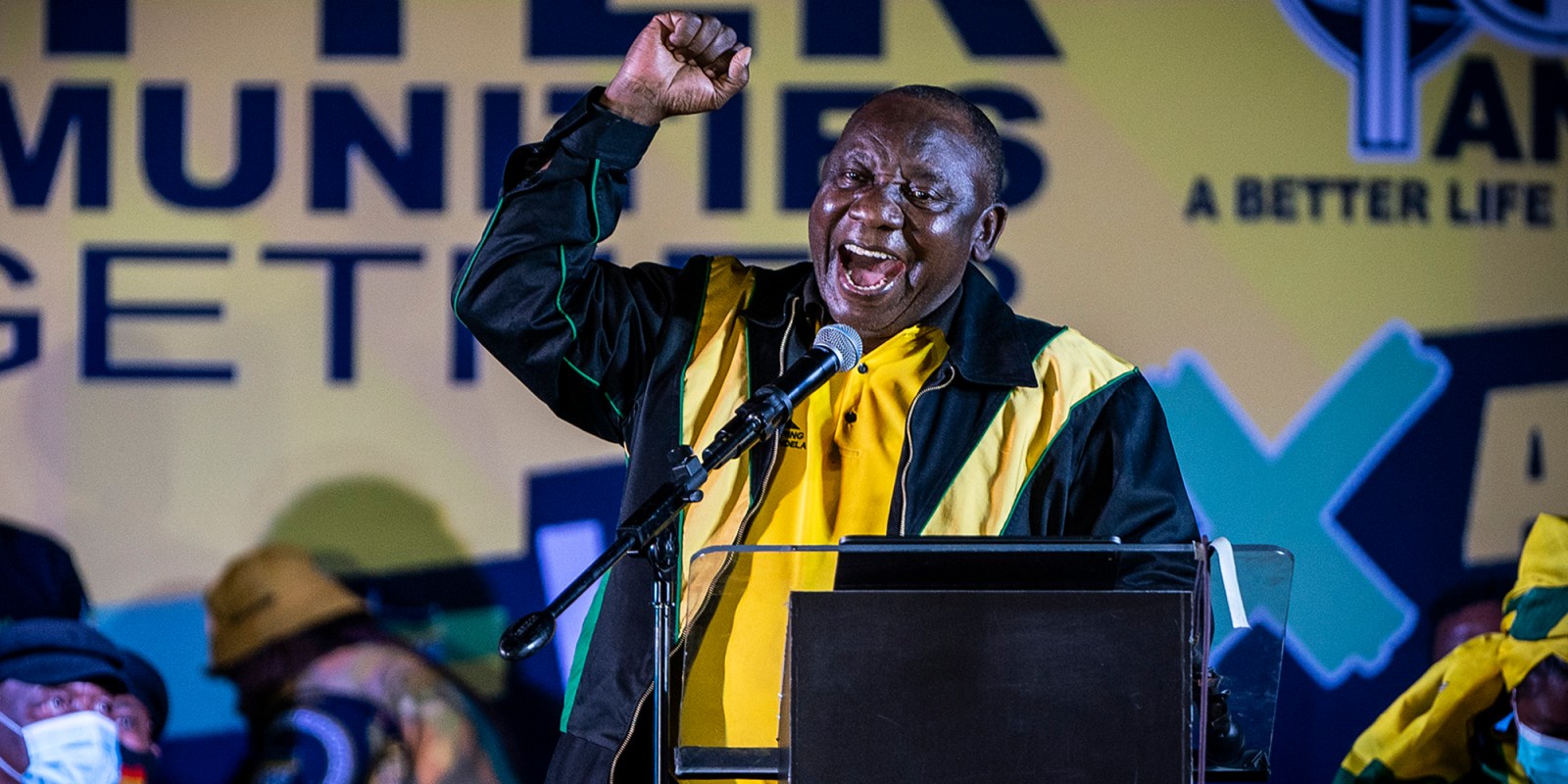 When the skies opened over Soweto on Friday night, there wasn’t even a cloud on the Apple weather app. The wind started blowing just as President Cyril Ramaphosa started his speech and the rain started five minutes later.

Organisers must have anticipated the worst but hoped for the best, because unlike the ANC’s manifesto launch in Pretoria’s Church Square about a month ago, the stage at President Cyril Ramaphosa’s final election rally, in Soweto on Friday, had a roof this time around.

The few hundred people in the crowd, however, were out in the open.

The wind started blowing just as Ramaphosa started his speech and the rain started five minutes later. By the third sentence of his written speech, he mostly winged it, glancing down at his trusty iPad ever so often.

It’s a speech that he has repeated a number of times in the past few weeks with a few variations for emphasis here and there, sometimes up to three times a day, as he went around trying to convince communities during mini-rallies that his renewed ANC will rescue them from the ANC which has failed them up to now.

“We know that things often get worse before they get better,” he said, as water ran down the roof in mini-waterfalls and as darkness fell over big parts of the leafy Thokoza Park. “Sometimes there are storms, there’s darkness before the dawn, before the sun rises. And we must never be discouraged.”

By that time a small number of people held plastic chairs upside down over their heads to shield them from the rain, while others had fled into the media tent and a couple of gazebos were put up, possibly for the elderly or VIPs.

“We want our people to continue to trust this glorious organisation called the African National Congress, because it is their movement,” he said.

Ramaphosa turned the storm into a metaphor for what the ANC had been going through in its process of trying to counter State Capture and large-scale corruption. He didn’t mention July’s week-long looting and arson in KwaZulu-Natal and Gauteng in which more than 300 people died and which did massive damage to the economy and the national psyche. It came a few days after the jailing of former president Jacob Zuma for his defiance of a court order to testify before the State Capture Inquiry.

Ramaphosa appeared calm on television even as drenched cameramen tried to secure plastic bags around their cameras while keeping the transmission steady, and some streets around the park became rivers due to bad drainage.

Ramaphosa promised things will get better, in the ANC as well as the country:

“We have experienced some moments of difficulty in the ANC when our efforts to renew ourselves have met with resistance, have been unsettling and have sometimes increased tensions amongst us.

“As the ANC we are determined, comrades, to stay the course. We are going to renew this glorious organisation and make it an organisation that is fit to serve the people of our country and we are going to work harder and with greater determination to correct our mistakes and to build a better South Africa.”

After a particularly loud crack of thunder, Ramaphosa pronounced that it was the sound of “blessings that we are being showered with” and that the ANC should accept these “as blessings rather than as destructions”. He said: “We are being blessed. We are being cleansed as well.”

The storm passed only much later that night and the sun rose again the next day, but polls show that the ANC might need more than sunshine to emerge victorious. Even before the latest bout of scheduled power cuts by Eskom, polls put the ANC at under 50% of the vote in Johannesburg and Ekurhuleni metros, ANC elections head Fikile Mbalula told the Sunday Times. Ramaphosa spent the last three days before the elections trying to create some Ramaphoria in and around Gauteng, an indication that the party is very concerned.

In Tshwane and Nelson Mandela Bay the figure was under 40%. The power cuts were likely to have affected the governing party negatively in urban areas, where people are used to a regular electricity supply.

Mbalula admitted to the publication that “the base of the ANC has suffered in terms of electricity for years. Even when the president explained it, people understand.”

We tell them, just like the grants they got under the NP [National Party in the apartheid years] didn’t stop when the ANC took over, the grants will not stop when someone else takes over from the ANC.

This explains why people have voted for the party up to now, despite hardships, and why many are likely to do so again. But it’s also becoming clear that things are changing, and that Covid-19 has been an accelerator of such changes.

All along the campaign trail, former ANC supporters, some of those who have started breakaway parties, say people are reaching a point where they no longer believe promises. One in an impoverished area said he had noticed a turning point in people’s attitudes when they finally realised that their grants come from the government and not from the ANC.

“We tell them, just like the grants they got under the NP [National Party in the apartheid years] didn’t stop when the ANC took over, the grants will not stop when someone else takes over from the ANC,” a former ANC member said.

Ramaphosa in his speech on Friday night acknowledged that the R350 Covid-19 grant had proved very popular among the electorate, and he made a vague promise that it will be retained in some form. A number of commentators have pointed to the scrapping of the grant as one of the factors that might have led to the violence in July.

Other variables that are new include the divisions in the party’s leadership, which saw it campaigning without a secretary-general and with proper provincial structures in only five out of the nine provinces. Similar leadership problems have plagued the DA, which has given up hope of improving from the last local government elections, when it got a total of 24.57% of the vote, to indicating that it would be happy to just match or improve the 20.77% it got in the national elections in 2019.

The DA, too, was gunning hard for Gauteng – with party leader John Steenhuisen basing himself in the province for the elections campaign – as well as for the Nelson Mandela Bay Metro, where the chair of the party’s Federal Council, Helen Zille, went to support the party’s mayor Nqaba Bhanga, who was in a serious car accident under questionable circumstances just two months before elections.

While it ran a strong campaign with the central message of “The DA gets things done”, also the theme of its final rally under a blazing sun last Saturday in Johannesburg, the party got embroiled in spats that enraged some of its councillors. The biggest of these was the Phoenix poster issue where the party’s KwaZulu-Natal chairperson, Dean Macpherson, unilaterally put up posters indicating that the DA considered the Indian community members who claimed to defend their communities against looters as heroes.

It’s a contentious narrative, however. All nine provincial leaders opposed these posters, while the prominent national leaders were somewhat more ambivalent. Steenhuisen was adamant that polls showed that the saga had not hurt the DA.

The beneficiaries of the losses of the two bigger parties are smaller parties like the EFF, the FF Plus, newcomer ActionSA, and others.

While none of these is expected to get a majority in any council, some of them might just get enough to become kingmakers, which means that the coalitions which became part of the South African local government landscape in 2016 will become even more entrenched when these elections are done. DM