AGE OF THE ASSASSIN OP-ED

AGE OF THE ASSASSIN OP-ED

Between July and August 2021, three women in South Africa were the targets of assassination attempts. Babita Deokaran and Nokuthula Bolitye were both killed, while Ntobe Shezi survived. All had political roles: Deokaran was a crucial witness in a corruption investigation at the Gauteng Department of Health, Shezi was standing for election as a ward councillor in KwaZulu-Natal, and Bolitye was a ward councillor in Cape Town.

The deaths and injuries of the three women are not outliers: data gathered by the Global Initiative on Transnational Organized Crime (GI-TOC) on assassinations in South Africa has shown a consistent incidence of political hits since 2000. KwaZulu-Natal is a hotspot for political hits, which have often spiked around election time. With municipal elections looming, politically linked assassinations may become more frequent.

Babita Deokaran, acting chief financial officer at the Gauteng Department of Health, was a crucial witness in a corruption investigation, headed by South Africa’s Special Investigating Unit, into irregularities in a R332-million personal protective equipment deal at the department. Deokaran’s testimony would have allegedly implicated top-level officials.

Deokaran was attacked outside her home on 23 August 2021. Hitmen opened fire as she returned home after dropping her child at school. She was transferred to hospital but died from her wounds.

The hitmen had allegedly been monitoring her for over a month and had meticulously planned the operation, ensuring the nearby CCTV cameras were turned off at just the right time. However, thanks to evidence from a neighbour regarding the registration of the hitmen’s car, the police were able to arrest the hitmen within a few days. Investigations are ongoing, but the identity of those who ordered the hit have yet to be confirmed.

Just two days before, Ntobe Shezi, an African National Congress (ANC) candidate for ward councillor in Mid Illovo in the KwaZulu-Natal Midlands, survived an assassination attempt. Hitmen opened fire while she was returning home after a voting meeting. Six weeks earlier, on 12 July, Ward Councillor Nokuthula Bolitye was also gunned down outside her home. Bolitye was a ward councillor in Crossroads, a notoriously dangerous area of Cape Town.

Like most other hits, there have been no reported arrests in either of these cases, but the modus operandi of attacking a victim outside their home is a common feature of assassinations carried out by organised crime groups. Our monitoring has found that there have been six other political hits in South Africa in the past two months.

Political hits, like those on Deokaran, Shezi and Bolitye, have been a consistent feature of South African politics for at least two decades. We at GI-TOC have been monitoring assassinations in South Africa since 2000 and have built a database to analyse the nature and extent of targeted killings. Between 2000 and 2020, our database recorded a total of 1,822 assassinations, of which 404 (22%) were political hits. Overall, recent years have been more violent, with the last six years of the 21-year data set accounting for 47% of the total number of assassinations. The number of cases steadily increased from 2015, peaking in 2018, followed by a decline in 2019 and 2020. 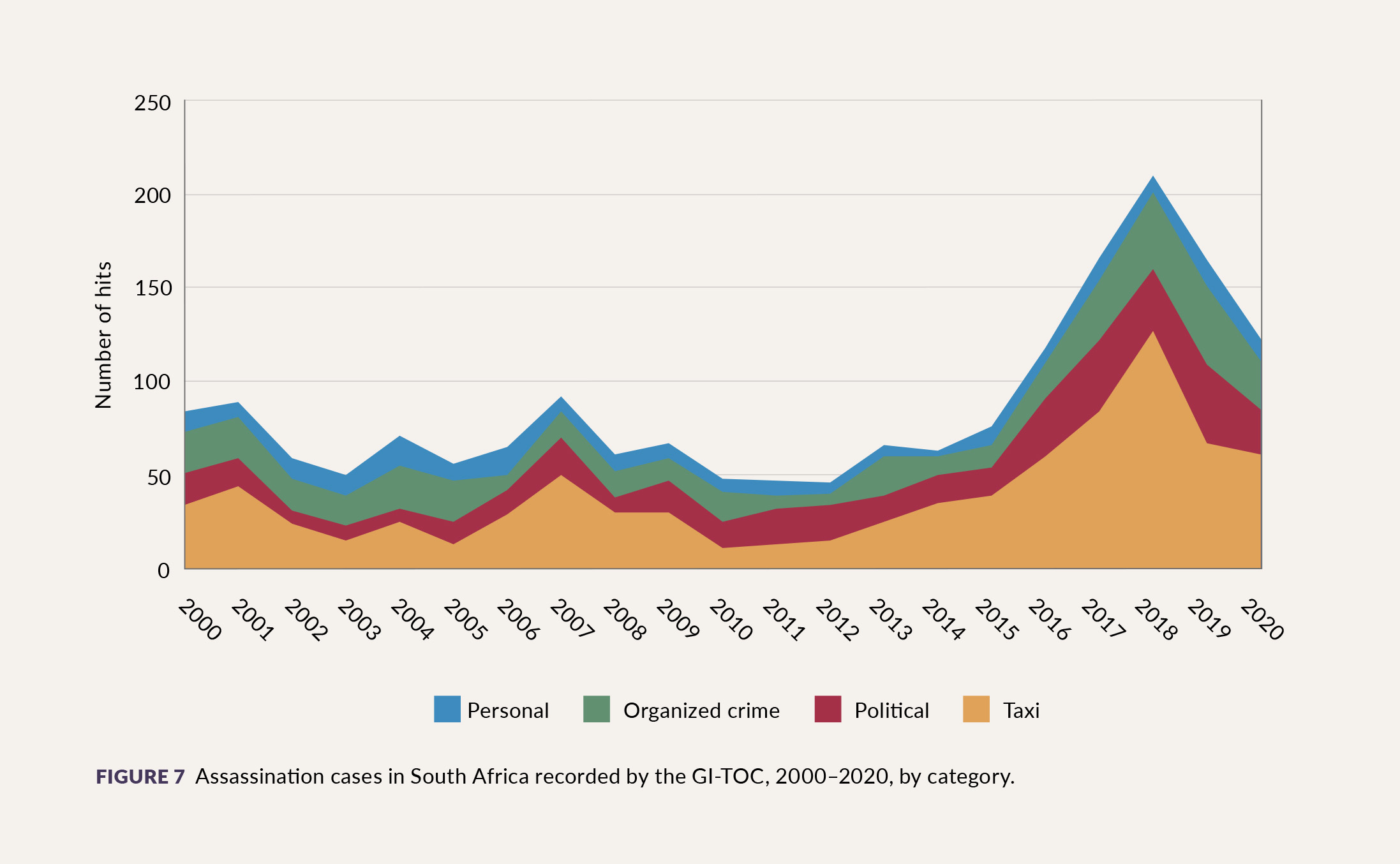 The number of hits classified as political, organised-crime related and personal have remained fairly stable through the 21-year period. Cases related to political motives and organised crime show a slight but steady increase over time (barring a decline in 2020), while cases related to personal gain remain consistently low. 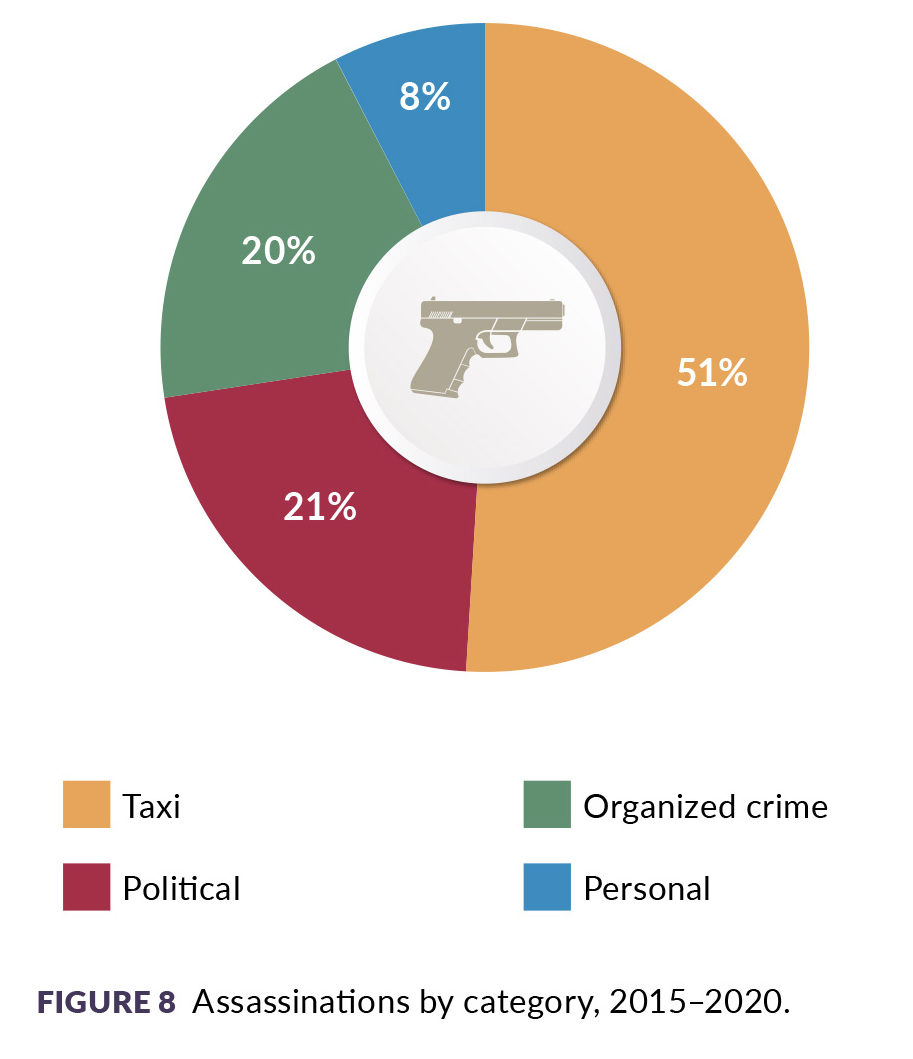 The assassination of whistle-blowers (like Deokaran) and local government officials (such as Bolitye) are two of the most common types of politically motivated assassinations in our database. The targeted killing of ward councillors, or candidates for councillors, leading up to local government elections is not new. Our database shows that in the lead-up to elections the increase in competition for ward council nominations often ends in violence as candidates “take out the competition”.

The position of ward councillor provides not only status and connections within the community but also comes with a significant financial benefit: ward councillors for the municipality of eThekwini, KwaZulu-Natal, for example, are estimated to earn around R400,000 per year, almost 10 times the national minimum wage (around R45,000 per year). This financial incentive may in part drive the trend for eliminating the competition. Although councillors are barred from serving on any tender committees, they allegedly often have influence over the outcome through their connections. Being elected as a councillor is also considered one of the key first steps in climbing the political ladder.

Between 2015 and 2020, political assassinations were concentrated in KwaZulu-Natal (see figure below), which matches trends shown by earlier data. The province accounted for 56% (103 deaths) of the total number of political hits in this period. This was followed by 22 cases (12%) in Gauteng, 20 cases (11%) in the Eastern Cape and 15 cases (8%) in the Western Cape. 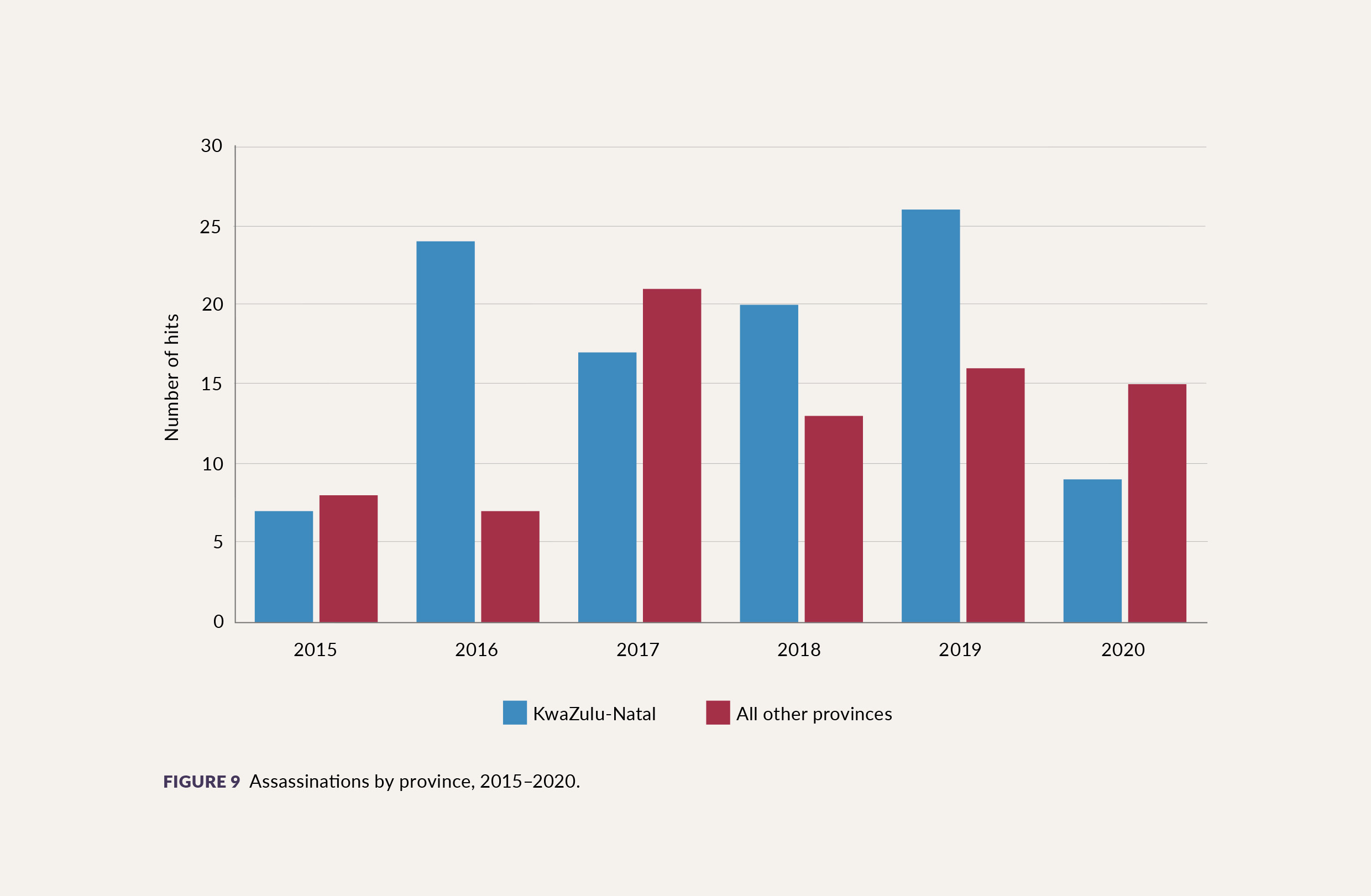 Assassinations in KwaZulu-Natal peaked in 2016 and 2019. Both years were election years: 2016 saw municipal elections in August and national elections were held in 2019. The attempted assassination of Ntobe Shezi continues this trend of pre-election targeting of candidates.

In 2020, there was a drastic decrease in political hits in KwaZulu-Natal. This was probably due, at least in part, to the national Covid-19 lockdown, which meant that political branch meetings and conferences, which can be flashpoints for violence, did not take place. But the extraordinary circumstance of the pandemic means that the 2020 decline in political hits in KwaZulu-Natal is likely to be a temporary pause in violence rather than the start of a long-term trend.

The province has a long-standing history of political violence, both during apartheid and in the transition to democracy. Previously, violence was largely related to interparty conflict between the ANC and the Inkatha Freedom Party, and mostly linked to political ideology. However, the trend now seems to be that violence results from intraparty conflict particularly within the ANC; with targeted killings fuelled by power struggles and competition for lucrative government tenders.

The magnitude of political violence in the province resulted in an official government-appointed inquiry being established in 2016, headed by Advocate Marumo Moerane. The Moerane Commission’s report, released in 2018 and based on the testimony of 63 witnesses, including police, activists, academics and violence monitors, found that that “there was overwhelming evidence from the majority of witnesses that access to resources through the tender system is the main root cause of the murder of politicians”.

The commission further found that “criminal elements are recruited by politicians to achieve political ends, resulting in a complex matrix of criminal and political associations that also lead to the murder of politicians”. Councillors have also allegedly been killed after publicly criticising corruption. The report made valuable findings and it is hoped that the recommendations — if implemented — will lead to a long-term decrease in political violence in the province.

KwaZulu-Natal was also the epicentre of the violence that flared up following the imprisonment of former president Jacob Zuma. It was the worst episode of civil unrest since apartheid, coming after months of increased political tensions and violence during the first half of 2021. The unrest in the province, and to a lesser extent Gauteng, included widespread protests, looting, burning of buildings and violence, resulting in over 300 deaths. In this trying and volatile environment, some industries and corrupt officials have resorted to violence for political or financial gain.

The assassinations of Bolitye and Deokaran and the attempted assassination of Shezi have seen the number of recorded political hits rise to 15 in 2021 so far. With the current political tensions in South Africa and violent competition leading up to the local government elections due to be held on 1 November 2021, more councillors and candidates may fall victim to political hits. Likewise, the increase in whistleblowing and corruption investigations could mean that more witnesses and whistle-blowers will meet the same fate as Deokaran before the year is over, especially given the lack of protection afforded to witnesses in such cases. DM