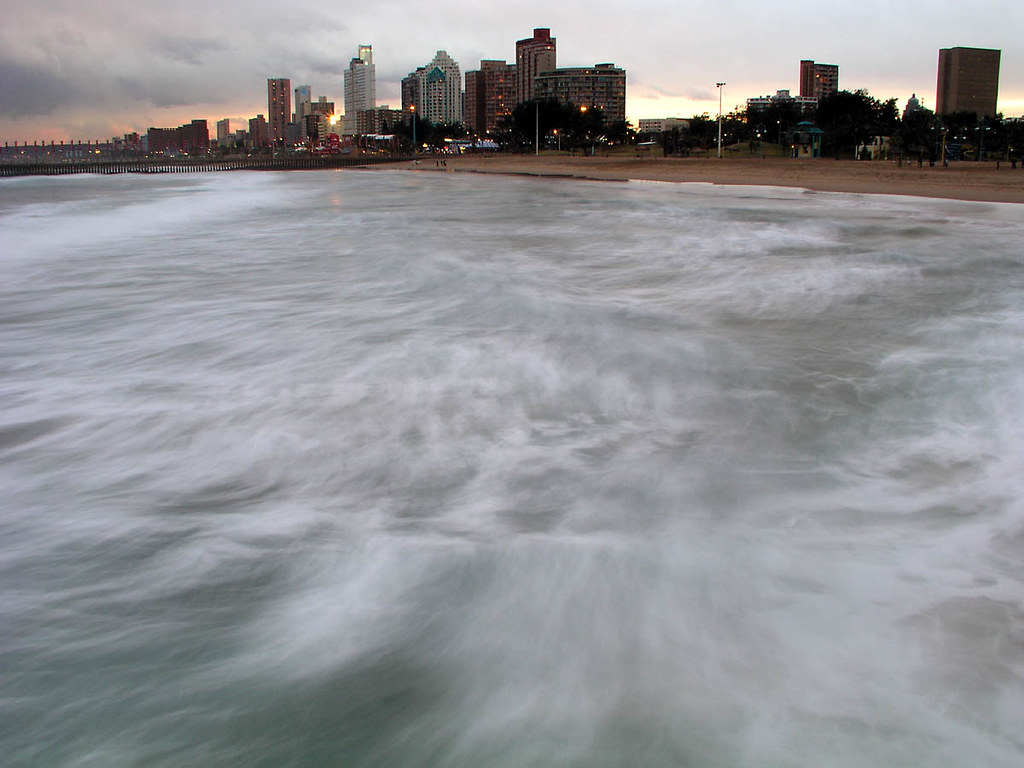 Sea-level rise is not a major threat in South Africa but, tied with other climate crisis consequences, it can become one. Here’s how higher sea levels could affect the country’s coastal cities.

With the world heating up, countries are expected to make ambitious efforts to keep global temperature rise below 1.50C at the upcoming COP26 negotiations. Africa, one of the most vulnerable regions to the climate crisis, is likely to get hotter at twice the global rate, with sea-level rise a consequence.

For a long time, global warming was almost solely a phenomenon associated with melting glaciers. Alongside this notion were images of polar bears stranded on cracked-off pieces of ice — and land expected to almost disappear as it was swallowed by sea-level rise.

For South Africa, sea-level rise is “not a terrible threat”, according to Dr Melanie Lück-Vogel, a senior researcher with the coastal systems research group at the Council for Scientific and Industrial Research (CSIR). This is due to South African coastal shelves being quite steep, with the exception of some estuaries, mainly on the south coast. She adds, however, that the threat of sea-level rise becomes dangerous once it combines with storm events and “normal” high-water levels during spring tides.

“Spring tides in combination with storm events cause higher water levels which can lead to overtopping of, for example, seawalls and extensive inland flooding. Now, add another metre of sea-level rise, and the overtopping and damage to coastal infrastructure and settlements gets worse,” Lück-Vogel told Daily Maverick.

A study in the African Journal of Marine Science found that sea-level rise varied across South African coasts. The West Coast has been rising by 1.87mm per year, the Southern Coast by 1.48mm/year, and the East Coast region by 2.74mm/year — as per data between 1957 and 2006.

The UN’s Intergovernmental Panel on Climate Change (IPCC) has adjusted sea-level predictions, introducing a new high-end risk scenario in which global sea-level rise is approaching 2m by 2100 and 5m by 2150 under an intense greenhouse gas emissions scenario.

According to data by Nasa and a European satellite, however, global sea-level rise is accelerating incrementally rather than at a steady rate, as previously thought. At current rates, sea levels will rise 65cm by 2100, threatening difficulty for coastal cities.

As global leaders head to Glasgow to discuss efforts to maintain a 1.50C global average temperature increase, adaptation for coastal regions ought to be among the topics of discussion. This is due to coastal cities such as Durban, East London, Cape Town and Gqeberha needing additional financing to adapt to sea-level rise.

Cape Town’s City Bowl, for example, is, according to Climate Central, expected to be completely flooded if temperatures increase by about 30C.

With the IPCC projecting sea-level rise at 2m by 2100, Lück-Vogel said she found the image somewhat misleading as water levels displayed in the above image are not stipulated. She said the image was quite a jump from global warming scenarios to the seen flood levels.

One of the ways in which cities can look to adapt is through spatial land-use planning to prohibit or restrict new construction or infrastructure along areas predicted to be affected by sea-level rise, Dr Jackie Raw, a post-doctoral research fellow at the Nelson Mandela University, told Daily Maverick.

“In addition to this, coastal cities can employ mitigation plans. These are often used in combination with adaptation plans,” Raw said, adding that cities were seeking “nature-based” solutions to the sea-level rise problem.

“These include using ‘soft engineering’ approaches and restoring natural areas that can serve as buffers against the impacts of sea-level rise. The City of Durban uses beach nourishment to provide sand to the city beaches, while also attempting to provide a natural buffer in the form of small back-beach sand dunes,” Raw said.

She said such efforts weren’t always effective due to sea storm damage to beachfront infrastructure. Opting for soft buffers such as rehabilitating coastal dunes with dune vegetation to adapt to sea-level rise is, for Raw, a better approach in comparison to a sea wall as that leads to further erosion and the loss of beach sand.

“The biggest problem is how to deal with existing developments which are located in risk areas. For obvious reasons, it is very difficult to convince the residents just to abandon their properties and to move somewhere else,” said Lück-Vogel.

Coastal population numbers are expected to almost double by 2050, according to Lück-Vogel.

“This gives authorities the opportunity to proactively keep currently vacant land that might be at risk of climate change impacts free from development and save lives in this way.”

COP26 is expected to be the most ambitious COP yet, with countries expected to agree on drastic measures to maintain the 1.50C global average temperature strategy agreed on at COP15 in Paris.

One of South Africa’s main goals at the negotiations is gaining the finance for adaptation and mitigation, in hopes of protecting coastal cities. DM/OBP