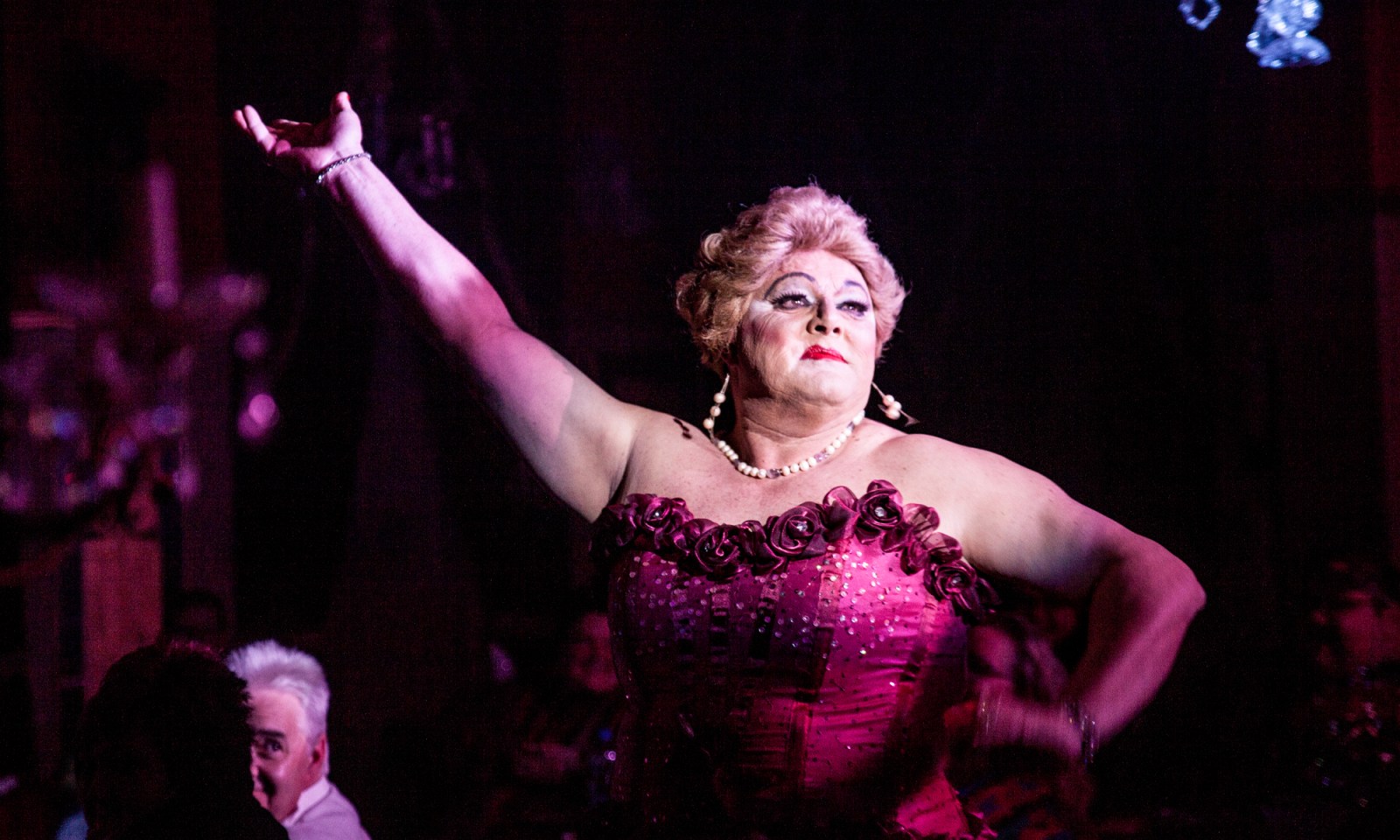 When Mark Hinds and Jacques Rabie saw an ad for a hotel for sale in the Eastern Cape, little did they know that it would lead to the birth of the Steytlerville Follies starring the pair as Dame Leyla Lamborghini and Freddy Ferrari.

The Karroo Theatrical Hotel is home to arguably the most popular drag show in the Karoo. According to its owners, Mark Hinds and Jacques Rabie, guests often have to book months in advance for a weekend experience that includes accommodation, food, and the hotel’s main attraction, the Steytlerville Follies.

Described as a “sophisticated cabaret show starring the famous Karoo diva, Dame Leyla Lamborghini performing her dramatic renditions of great songs of yesteryear,” it is presented by “maestro Freddy Ferrari with his mastery of the grand piano”.

The Dame and the maestro are the alter egos of the hotel’s owners, Rabie and Hinds. Yet, when the couple met in 2003, owning and running a hotel in the Karoo, not to mention producing and performing their very own cabaret show, was not part of the plan.

Located 164km north of Gqeberha, and relatively far from both the N1 and the N2, the small, quiet Eastern Cape town of Steytlerville is not exactly the kind of place many find themselves driving through unexpectedly.

Drive in from the north side via the R329 and the first thing you’ll see before spotting the town in the distance is the old South African flag painted on the side of a mountain, with the dates 1928-1994 painted below it; and next to it, the current flag. Drive a 100 or so metres further towards the town and you’re greeted by a sign loudly proclaiming in capital letters, “JESUS IS THE KING OF THE UNIVERSE”. Keep on driving at a polite speed and you’ll cover the entire length of the town’s main road in well under a minute and Steytlerville will be behind you.

“Here, in blazing summers and icy winters, the silence is so pure you can hear God think, the stars so near you feel you have only to reach out to touch them.” That is how a tourist page on the website baviaans.co.za describes Steytlerville. According to the most recent census, from 2011, Steytlerville was home to a total population of 1,835, spread across 540 households.

“I kept on seeing this advertisement which said, ‘Hotel for sale in the Eastern Cape’; second week, same newspaper, same advertisement…. It was an abandoned building… derelict and stood empty for a couple of years and we fell in love with the place,” Hinds explains, recalling the moment in early 2003 that would lead him and his partner Rabie to Steytlerville.

The pair had met a few months earlier in Cape Town at Hinds’ Waterkant home shortly after he had returned to the country after more than a decade overseas.

“I travelled around the world performing as a white-face clown, and finally I came back to South Africa to settle down in 2002, in my home country,” says Hinds.

Soon after, the couple discovered that they not only shared a passion for the stage and performance, but also a love of the platteland. First, they moved to Tulbagh. A few months later, Hinds came across that advert.

“We’ve always wanted to live in a mansion,” says Rabie. So they bought the derelict hotel in 2003 and got to work transforming it into their dream mansion in the middle of nowhere. But it wasn’t long before the townsfolk came knocking to ask when they would be opening. “The two of us looked at each other and said ‘WHAT!?’” Rabie recalls.

Maverick Life paid the couple a visit to learn more about their journey to the Karoo, and how in so doing they journeyed deeper into their most authentic selves and gave the Karoo the cabaret it didn’t know it needed. Above is a short film about the fantastic, fabulous Karroo Theatrical Hotel. DM/ML