Remembering Tozama Mkwakwi and Thandeka Vinjwa: ‘daughters of the soil’ who devoted their lives to social justice 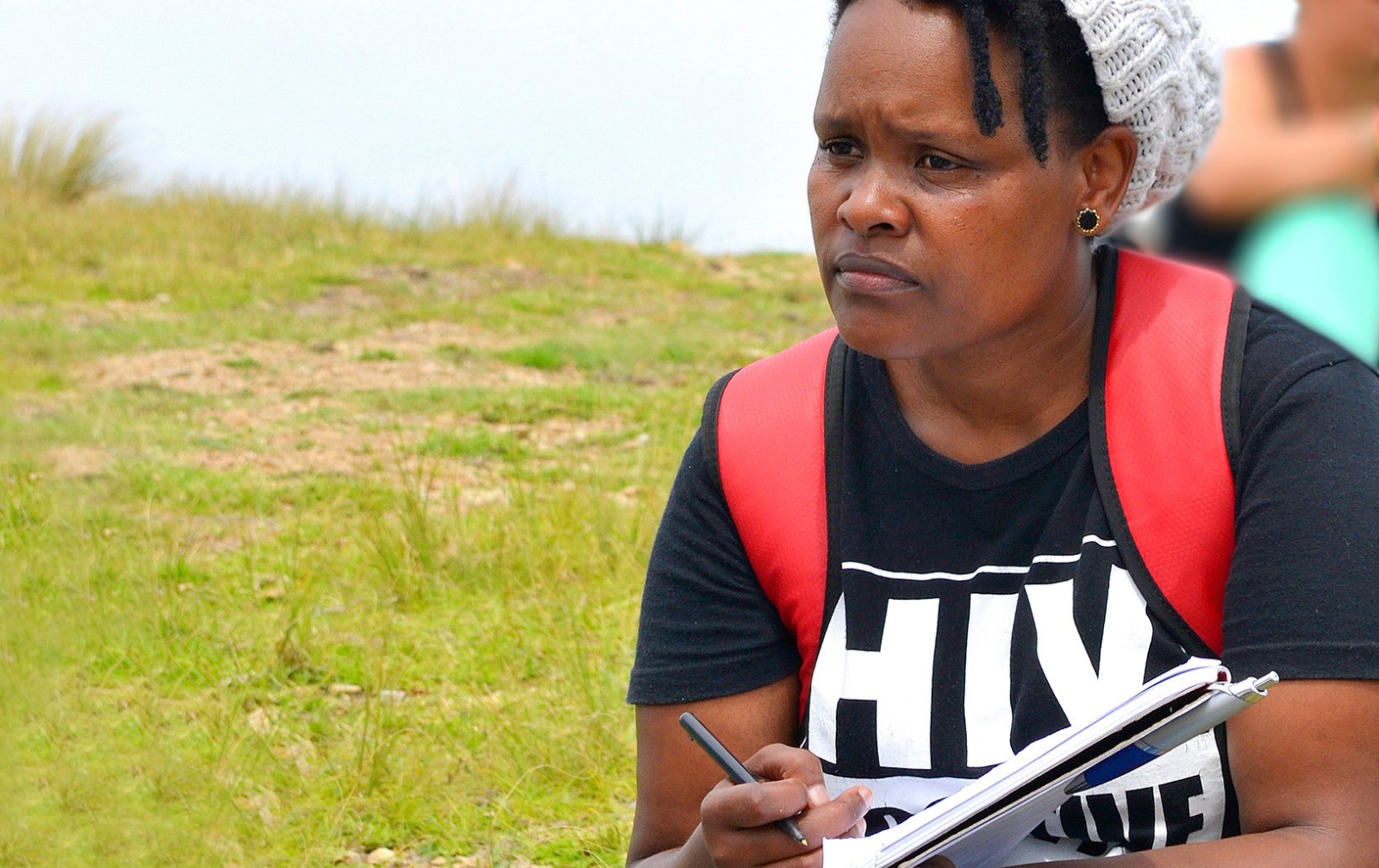 In this file from from 2104 Thandeka Vinjwa gathers testimonies from a social grant point near Nqileni Village. Vinjwa worked as a citizen journalist for Health-e News Service. She often facilitated access to residents for journalists, activists and lawyers trying to improve access to health services. (Photo supplied: Treatment Action Campaign)

Both women were profound activists, leaders and mothers to many comrades in the struggle for the right to health.

Ngqabutho Mpofu is the Advocacy and Media Manager at the Treatment Action Campaign.

Often it is those in official leadership positions who are memorialised in newspapers obituaries. Leaders deemed “worthy” of remembrance. But importantly, we must also remember our community activists. Those leading the struggle on the ground. Those fighting for the rights of the people where it matters.

We must also celebrate, remember and memorialise these ‘everyday people’. Our comrades who helped shape the society we want to live in and leave behind for future generations. Comrades who leave behind legacies that are as immovable as great baobab trees.

Comrades Thandeka Vinjwa and Tozama Mkwakwi are two such comrades that we are deeply shocked and saddened to lose too soon. Two forces from the Eastern Cape, these comrades have led campaigns to ensure access to HIV treatment, to fix the broken public healthcare system and the crises ravaging our local clinics. Their role in partnership with other comrades cannot be overstated. We remember them fondly below.

Comrade Tozama Mkwakwi passed away on 10 August 2021. Tozama’s life and work coincided with some of the most important times in post-Apartheid South Africa, in her work for the Treatment Action Campaign. Her dedication to her community was lifelong.

She was a proud TAC member in good standing, residing in Mdantsane, Eastern Cape province. She was a member of the organisation for 12 years, having joined in 2009, becoming an active member of Zanothando branch just after it was formed. She was amongst the people who participated in a community imbizo held to introduce TAC in that area.

Her personal role was to mobilise. She excelled at organising branch and community meetings. Because of her passion for community work, she was entrusted to lead a branch in 2010-2011, when a trainer was employed at Siyayinqoba (Beat It). She became a Branch Organiser, then a District Organiser in the organisation because of her dedication and willingness to constantly improve on her advocacy work and TAC’s flagship treatment literacy programme.

She built relationships with stakeholders in Buffalo City Metro and was also nominated to become a secretary in various community forums. Her personal interest was in advocacy work. To see a change in the community. Although she, like the rest of us, sometimes became discouraged when not winning battles on the ground she never looked back because of her mission and values. She also became a District Organiser for the Ritshidze project in 2019.

Activists, like politicians, have the ability to reach beyond the grave after their demise, as the events immediately accompanying these inevitable events can be rallying points that strengthen their advocacy. One may only wonder if the goal she fought for her entire adult life — for access to equitable and affordable healthcare for all — had been achieved, then we likely would still be with her today. It’s her late cancer diagnosis and less than optimal treatment that accounted for her life. Ours is to continue the fight, advocating for quicker diagnosis, access to cheaper, better drugs, shorter wait times and better staff attitudes, among many other issues.

Comrade Thandeka Vinjwa passed away on 10 September 2021, exactly a month after her comrade Tozama. Theirs was a common life mission, united in their shared goal to ensure everyone could access quality healthcare and affordable medicines in their home of the Eastern Cape, and the country as a whole.

Thandeka joined the Treatment Action Campaign in 2007 as an active member of the Mevana branch in Lusikisiki. She would remain a committed member in good standing for the rest of her life. Through her time as a branch member, her passion for community empowerment and knowledge shone through, leading to her appointment in ​​2009 to the organistation’s policy and research team.

Hers was a life of passion. Her work consistently highlighted the challenges faced at community level. She wrote the first of many articles in the newsletter, Izwi Labantu, which was a collection of community stories and experiences of community members on the ground. It would prove the first of many reports. Through her work for TAC in partnership with SECTION27, working on the state of Emergency Medical Services (EMS) in the Eastern Cape, Thandeka will be forever immortalised on paper in the Death and Dying Report. It’s an indictment on politicians and mediocre bureaucrats who have cut corners that the issues raised there are still pertinent today. This has given us travesties such as the so-called “scooter bikes” saga, so reminiscent of early 1900s ambulances, that wiped off R10-million from the coffers of an already broke department at possibly the worst time possible.

Because of her passion for community work, Thandeka was entrusted to lead and was appointed as the District organiser in OR Tambo branch in 2010-2011. She served diligently in this position until her passing.

When asked to speak about Comrade Thandeka, Anele Yawa, the TAC General Secretary noted Thandeka’s leading role in the creation of the Eastern Cape Health Crisis Action Coalition (ECHCAC) in June 2013. This coalition which was formed in order to advocate for the improvement of the province’s healthcare system of partners is still in existence today.

Sibongile Tshabalala, the TAC National Chairperson paid tribute to her by speaking about her ceaseless commitment to issues facing women and people living with HIV.

Debbie Harrison, the Monitoring and Evaluation Manager at the TAC and a comrade who worked closely with her summed it up perfectly: “she was professional, friendly and responsive. I will miss her cheerful and reliable manner so much.” This sentiment was echoed by Thuthukile Mbatha, a researcher at SECTION27, who said “She was a very  sweet, compassionate, gentle and caring soul.”

In the final analysis, all we can say is rest in power comrades. Go well daughters of the soil. Our memories of you will be treasured in our hearts forever. We continue the fight in your memory. You have earned your rest. DM/MC