Ambulance scooters saga: ‘We showed the minister the wrong vehicles’ 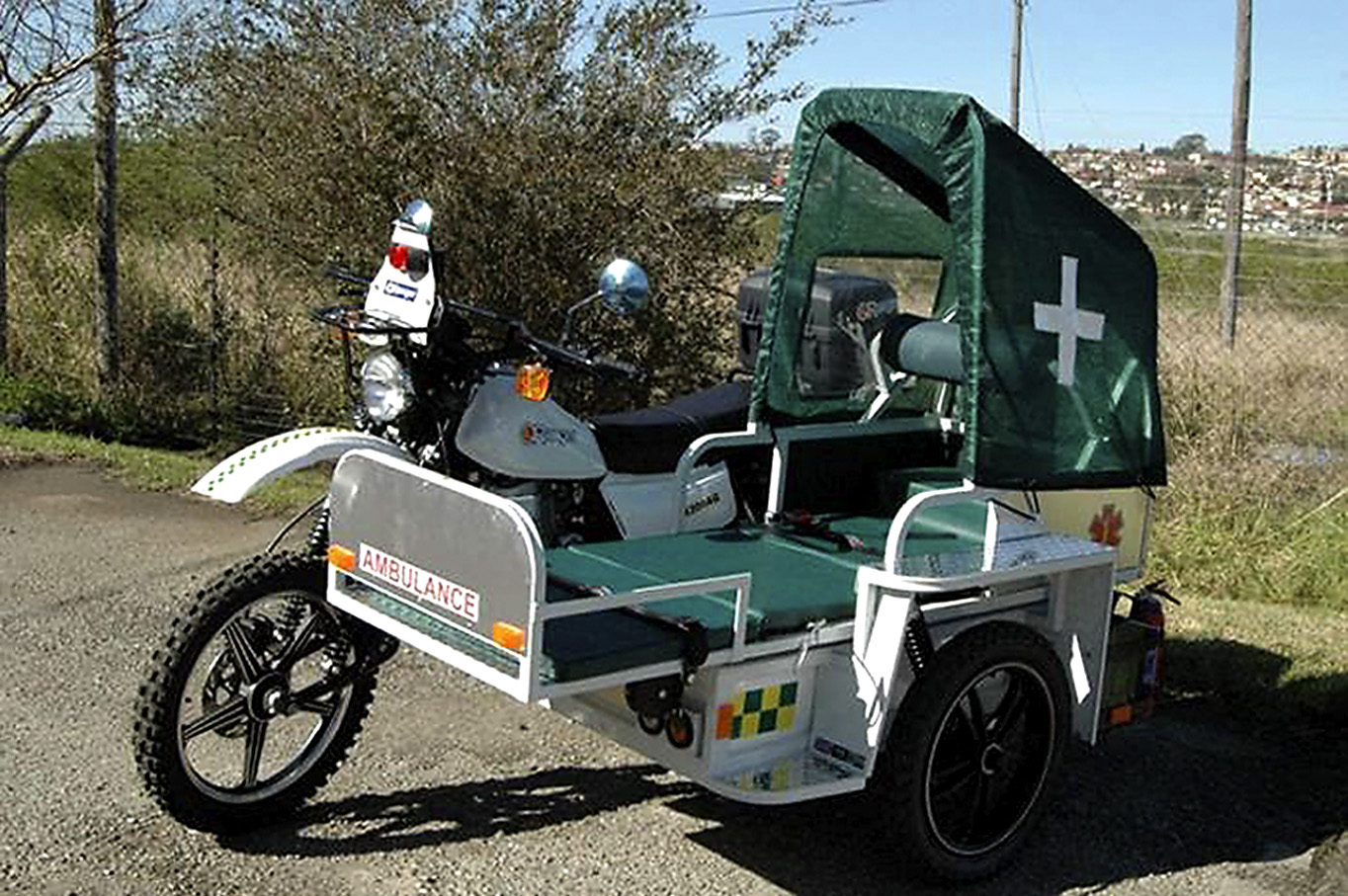 A prototype of the motorcycle and ambulance sidecar shown by the Eastern Cape Department of Health to Health Minister Dr Zweli Mkhize. (Photo: Supplied)

The Eastern Cape Department of Health has admitted it showed the wrong motorcycles to Health Minister Dr Zweli Mkhize, in an elaborate display that included the MEC for Health, Sindiswa Gomba, and Mkhize taking rides around a parking lot in the scooter ambulances.

“We wanted to show the minister what is possible. We did not intentionally deceive him.”

This was how Eastern Cape Department of Health spokesperson Siyanda Manana explained why they showed the Minister of Health, Dr Zweli Mkhize, scooter ambulances instead of the mobile clinics they had bought for R10-million.

The presentation using ambulance scooters was subsequently repeated at Mooiplaas near King William’s Town where a television crew was invited to record how patients can be transported in the scooter ambulances that the department did not order.

Brian Harmse, the owner of Fabkomp, the company that won the tender to provide mobile clinics, confirmed in a report to the health committee of the Eastern Cape legislature that he was told by the department to bring the motorcycle ambulances to the launch as he only had one mobile clinic available. He confirmed that the department had never ordered the motorcycle ambulances and that those used in the launch were intended for Kenya.

It seems that the MEC for Health, Sindiswa Gomba, also had the wrong information and her speech raised questions why money that was intended to fight the coronavirus pandemic in the province was used to buy the mobile clinics or the scooter ambulances.

In her speech at the launch of the mobile clinics she said:

“We are fighting the spread of Covid-19 and most of our energy is focused on that. But that does not mean we have neglected other health issues. This is why we are gathered here today, which is a historic day for our province and the department as we are launching the 100 EMS scooters. These are not your ordinary scooters. They are specialised and have beds.

“With these scooters, we will be able to get to some of the most remote areas. We are ensuring that people in hinterlands also get an effective and efficient health care service. Minister Mkhize, we are ensuring that just because people live in rural areas should not disadvantage them. Not any more. We are levelling the playing fields with these specialised scooters so that we do not hear horrific stories of how people’s lives might have been saved had ambulances been able to get to them.

“We want everyone to have access to medical care. The department has its fair share of challenges, that much we acknowledge, but getting to people regardless of their location should not be one of them. It will not be one of them any more. Even if you are in the mountainous Matatiele or Lusikisiki we will get to you. No matter how treacherous the roads leading to your village we will now be able to get to people in need of medical care.”

The province has suffered a crippling shortage of ambulances for the past decade. In 2016 the South African Human Rights Commission ordered the department to address the issue following an investigation. When the Eastern Cape legislature did its oversight to ascertain the readiness of the province to face the coronavirus pandemic, chairperson Mxolisi Dimaza said they found 2,000 vacancies in the emergency services and a severe shortage of vehicles. He said they had also raised the issue of workers not being paid all their overtime and other allowances since 2018.

Manana said the tender documents will show that they did not buy scooter ambulances but that they bought motorcycle clinics that will be used in the deep rural areas of the province where there are no proper roads.

He admitted that they showed the minister the wrong motorcycles.

“We wanted to show him what was possible. It was not our intent to mislead him,” he said.

In many areas that were touted as the beneficiaries of the project, residents said they were still using wheelbarrows to carry the dead and the ill to the road for pick-up by ambulance or car.

The provincial secretary of the South African National Civics Organisation in the Eastern Cape, Tony Duba, said he didn’t think the scooter ambulances would be able to stand the conditions of the province’s rural roads.

“People are using vans to travel and even those vans are finding it difficult, so we must really check and do a proper assessment how they are going to assist? We need to be serious about what we are doing for the people of the Eastern Cape,” said Duba.

The chairperson of AmaXhosa Kingdom Council Committee, Nkosi Xolile Ndevu, said in parts of the AmaXhosa Kingdom, like Centane and Elliotdale, the condition of the roads had never been improved.

The late AmaXhosa King Zwelonke Sigcawu was one of those who called on the government to build a tar road for rural people of his nation.

But Ndevu said nothing had happened and they are still waiting for better roads.

“To us this scooter programme it sounds like ubuqhitala [fraud], but let’s wait and see how this is going to help people. Are these scooters going to manage to travel to rural roads?” he asked.

Western Pondoland King Ndamase Ndamase said ambulances need to have four-wheel drive to get to most places in his kingdom.

“How will the scooters manage to travel?” the king asked.

The project has been placed on hold pending a review of the tender. Manana said they wanted to reiterate that the department had bought mobile clinics. These clinics, he added, are not made for patient transport but did have a tent that could be used to ensure patient privacy while consulting with a health worker. He said the mobile clinics will be used to dispense medicine and for health workers to check on patients.

The chairperson of the Eastern Cape Legislature’s health committee, Xolile Dimaza, said they had been alarmed to suddenly see the procurement of the motorcycles for use by health workers as it was not in the annual performance plan.

The R10-million for the motorcycles was, however, reflected as an “order placed” in a procurement document to detail the Eastern Cape government spending extra money intended to fight the coronavirus pandemic.

Last week, in response to a written question in Parliament, Mkhize said the motorcycles “do not meet the basic criteria for patient transport as an ambulance”.

“The purpose of the project by the Eastern Cape Department of Health is mainly for widening access to primary healthcare and delivering chronic medicine to the most remote areas of the Eastern Cape.

“The national Department of Health was not consulted on specifications before procurement of the scooters. However, the province has been advised that none of these scooters will be used as ambulances because they do not meet the specific requirements as provided for in EMS regulations,” he said. DM/MC