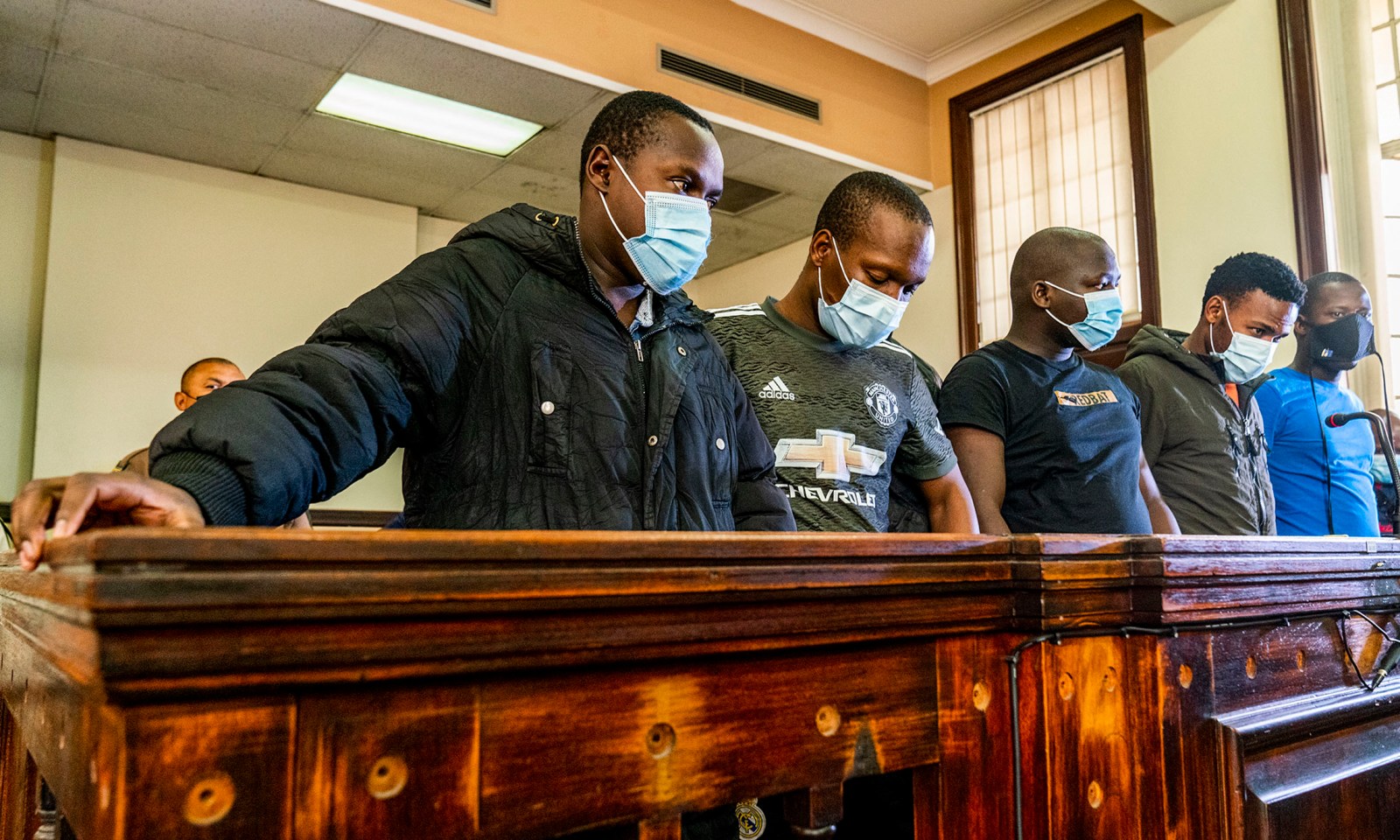 The accused of the murder of Babita Deokaran stand in the dock of the Johannesburg Magistrates Court. The case was postponed to 1 October 2021. (Photo: Shiraaz Mohamed)

On Monday, six suspects accused of murdering whistle-blower Babita Deokaran appeared in court for a second time, where their defence team applied for postponement of the formal bail application, citing challenging consultation circumstances. The State did not oppose, and the magistrate remanded the matter to 1 and 5 October. Until then the suspects will be remanded in custody.

The defence had inadequate time to consult six suspects who were behind bars after being accused of the murder of Gauteng health department senior official  Babita Deokaran, attorney Shafique Sarlie told the Johannesburg Central Magistrate’s Court, on Monday.

As he addressed the court, the six suspects stood behind him in the dock – appearing for a second time, their hands clasped either behind or in front of them.

Deokaran was murdered outside her home on 23 August after dropping her daughter off at school. Her death is believed to be a targeted hit in connection to her role as a witness in the R332-million corrupt PPE deal investigation.

The court was due to sit for the official bail application hearing, but upon the defence attorney’s request, it was postponed to two-day sittings of 1 and 5 October, 2021.

Before Magistrate Simon Sibanyoni, Sarlie argued that according to the protocol at the Johannesburg prison, where all six suspects are being detained, the defence is only allowed to consult clients on a Friday between 10am and 2pm. Since their first court appearance two weeks ago, the defence has only had two days to consult.

Sarlie explained that the circumstances of consultation made it extremely difficult to obtain proper instructions, especially when translators were involved and consultations were conducted through bulletproof glass via an intercom system.

“Your worship then, we’re not able at this stage, given the challenges, to proceed with the bail application,” Sarlie told Sibanyoni.

Sarlie asked for at least two more days (i.e. two Fridays) to consult his clients and, subject to the magistrate’s sanction, recommended 1 and 5 October.

State attorney Steven Reuben, did not oppose and the magistrate agreed it was in the interest of justice to postpone the matter to 1 and 5 October.

Sarlie also cited server issues as a challenging circumstance that prohibited the defence team from adequately preparing for the hearing.

Sarlie noted, what is common knowledge, that following a cyber-attack on the Department of Justice servers, defence attorneys were not able to receive the audio from the court.

In response to this, Phindi Mjonondwane, regional communication manager for the National Prosecuting Authority said, “most prosecutors, especially in the office of the DPP [Director of Public Prosecutions], they are on the server of the NPA itself. So hence advocate Steven Rueben was able to send whatever information that was required by the defence team for the purposes of this bail application.

“And in terms of the Department of Justice systems, yes we did receive that information as the NPA. However, we think that the court manager in this building will be in a suitable position to respond to how it has impacted the functioning of this court.”

Supporters of various organisations, including OUTA , gathered outside the court in support of whistleblowers.  ActionSA president Herman Mashaba appeared in court to gather voter support and convey his new party’s stance against corruption in the buildup to the local elections, scheduled now for November 1. Outside the courthouse, he was joined by supporters, including ActionSA Johannesburg campaign manager and former Democratic Alliance ward councillor Sarah Wissler, who told the media: “I knew Babita. I worked with her, she was part of the Department of Health and she helped me a lot with all of the Covid protocols and stuff that I needed whilst I was running my ward. She was an absolutely wonderful person. And when she was murdered, I was devastated.” DM