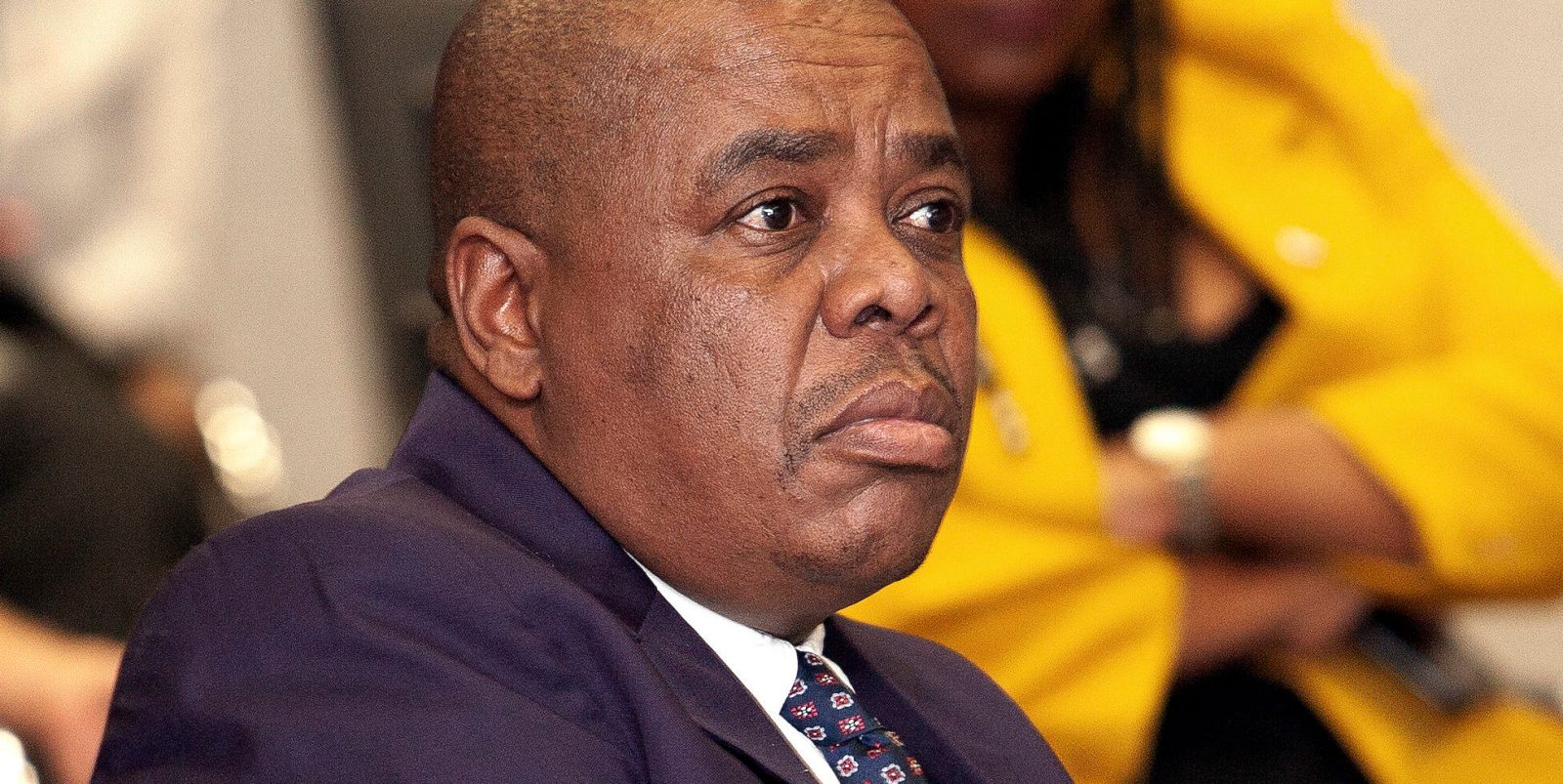 Sources have told Maverick Citizen that the suspension of Department of Health Director-General, Dr Sandile Buthelezi, and long-time Deputy Director-General, Dr Anban Pillay, appears imminent as they face disciplinary inquiries sparked by the Special Investigating Unit’s inquiry into the Digital Vibes scandal. It is believed that other senior officials may also be suspended.

Pending suspensions could leave the national health department depleted of senior leaders amid one of the biggest medical programmes — the Covid-19 vaccine roll-out — in our history. Making matters worse, Maverick Citizen has learnt that the department’s chief financial officer, Ian van der Merwe, recently resigned after 10 years in the post. His resignation is not linked to any accusations of malfeasance and he is believed to have cooperated in assisting the Special Investigating Unit (SIU) with its investigation.

Maverick Citizen’s inquiries arose after an interview last week with the recently appointed Minister of Health, Dr Joe Phaahla, in which he said that the department had “already been sent some letters [from the SIU] which we need to act upon”.

‘We are in uncharted waters — but we will get out of it working together,’ says Health Minister Joe Phaahla

Phaahla said that “in the next few days and weeks there will unfortunately be some action and that will have some impact also on our capacity as a department”, adding that “when wrong things have happened and investigations have led to findings, then people have to be held answerable”.

However, Phaahla said it was regrettable because “it will have an impact on our capacity, because from what I have seen, a number of people will have to be on suspension, pending charges… if you are already working with a skeleton staff and four or five people have to go away for a month or so, it just means your management is thin. But it’s a consequence which must follow”.

Both Buthelezi and Pillay have denied any knowledge of pending disciplinary action against them, although Buthelezi admitted that notices of suspension would soon be issued to some staff in terms of the Labour Relations Act (LRA).

It is not known what action President Ramaphosa has taken or is planning. The SIU did not answer a request for comment. However, last night Tyrone Seale, spokesperson for the president, confirmed that “there was a referral letter from the SIU relating to the DG and that the President is attending to that”.

He said the president had received the report in July and was in the process of “informing persons mentioned in it”.

The SIU’s investigation into the Digital Vibes affair, although handed to Ramaphosa more than a month ago, has still not been made public. This, we understand, is despite a Promotion of Access to Information request for the report having been made by the Democratic Alliance and possibly others.

Seale said the matter is expected to be raised in questions to the president in Parliament on Friday.

Although the report has not yet been published, the SIU’s founding affidavit in a case pending before the Special Tribunal seems to reveal many of their findings, including damning findings against former health minister Zweli Mkhize.

The SIU’s application to the Special Tribunal, dated 29 July 2021, is deposed by Rajendra Chunilall, the SIU’s principal forensic investigator. It seeks a “declaration of invalidity” of the Digital Vibes contract and its complete setting aside.

Following on this, it seeks the repayment of all monies by those who benefited from the unlawful contract up to an amount of R150-million, noting that of the total amount paid to Digital Vibes, “R90-million is spurious expenditure bearing no relation to bona fide disbursements”. This includes R1-million paid to the late Thandisizwe Diko’s Royal Bhaca Projects.

There are three particularly revealing aspects to the affidavit, which relies heavily on the evidence of a whistle-blower that is corroborated in numerous ways by the SIU’s own interviews and investigations.

The first is that Zweli Mkhize is seen to have had a very direct hand in seeking the appointment of Tahera Mather as the person in charge of communications (initially to do with National Health Insurance and later Covid-19) almost from the first day he was in office.

For example, the SIU’s affidavit contains extracts from an affidavit of the former director-general, Precious Matsoso, in which Mkhize is said to have repeatedly pressured the former DG to approve a contract to employ Mather, but where Matsoso resists, insisting on following proper procedures.

The SIU notes: “Ms Mather was from 30 May 2019, de facto already doing work for the NDOH and conveying instructions from the Minister to the DG as to proposed communications interventions for and on behalf of the NDOH.” It refers to the conduct of Mkhize as “improper… and at worst unlawful… as it constituted an interference by the Executive Authority in the affairs of the Administrative Authority of the NDOH”.

Mitha appears to have played some role in the day-to-day running of the Digital Vibes business after it secured the DoH contract. Scorpio established that she was listed as a contact person for the offices which Digital Vibes rented in Houghton, Johannesburg. The company rented the space for only a year and vacated the premises in December 2020.

Matsoso quietly resigned at the end of October 2019 after nearly 10 unblemished years as DG. At this point, Dr Anban Pillay, who has been a deputy director-general in the department since 2012, became acting DG, a position he held until 31 May 2020.

During this period, the SIU’s affidavit suggests, Pillay became an active facilitator for the Digital Vibes contract — he appointed them “based on an arbitrary decision… a decision made even before Digital Vibes had submitted its quotation”. Thereafter, he approved more than R74-million in payments to Digital Vibes in a mere four months.

The SIU states that in so doing, Pillay (who is the seventh respondent) “committed fraud and acted in contravention of the Public Finance Management Act (PFMA)”, thereby also exposing himself to possible criminal charges.

The SIU states that it has referred Pillay’s matter to the National Prosecuting Authority and that it is seeking to hold Pillay “liable for any loss or damages suffered by the NDOH as a result of his misconduct and/or negligence”.

Finally, the SIU cites the current director-general, Sandile Buthelezi, as the thirtieth respondent, in his capacity as representative of the National Department of Health. It notes that soon after his appointment, he “sent a letter to the CFO stating that all communications contracts would, with immediate effect, be managed by the office of the DG”. The CFO was also instructed to hand over all documentation relating to the Digital Vibes contract.

In the remainder of 2020, Buthelezi, who has described Mkhize as his personal mentor, authorised “in excess of R60-million” in further payments to Digital Vibes. This was despite the fact that on 24 June 2020, the National Treasury wrote to Buthelezi confirming an “approved deviation” of R25-million to Digital Vibes, noting that in the end, “NDOH paid an amount of approximately R99-million in excess of the purportedly approved deviation amount, which made a mockery of the purported approved SCM deviation”.

The SIU’s affidavit says it does not seek any relief against Buthelezi “other than the setting aside of the agreements or the purported agreement concluded by its officials”.

Unusually, and perhaps as a harbinger of further findings still to be made by the SIU after the filing of the affidavit, the SIU adds that because “the rules of the Special Tribunal do not make provision for an organ of state that is a respondent to a review application to provide a record of the decision impugned in the review”, it is seeking a special order that “the NDOH… provide the record of the impugned decisions together with such reasons for the decisions as it is required or wishes to furnish”.

With pending disciplinary inquiries and the Special Tribunal hearing and NPA investigations all ongoing, it is clear that the Digital Vibes matter still has some way to run. Because of the role of the whistle-blower, the media and the SIU investigation, justice is nipping at the heels of many of those alleged to have looted the department.

But what our investigation also reveals is a critical government department that is, in many ways, in freefall and which will not have the capacity for the huge health challenges South Africa faces in months and years ahead.

Millions of lives, and the constitutional right of everyone to have access to healthcare services, depend on an effective, capable, honest and adequately skilled national health department. To ensure this, it is clearly now in need of urgent remedial action. DM/MC