Treatment Action Campaign steps up its campaign to save Gauteng’s public healthcare system, spends night outside the premier’s office 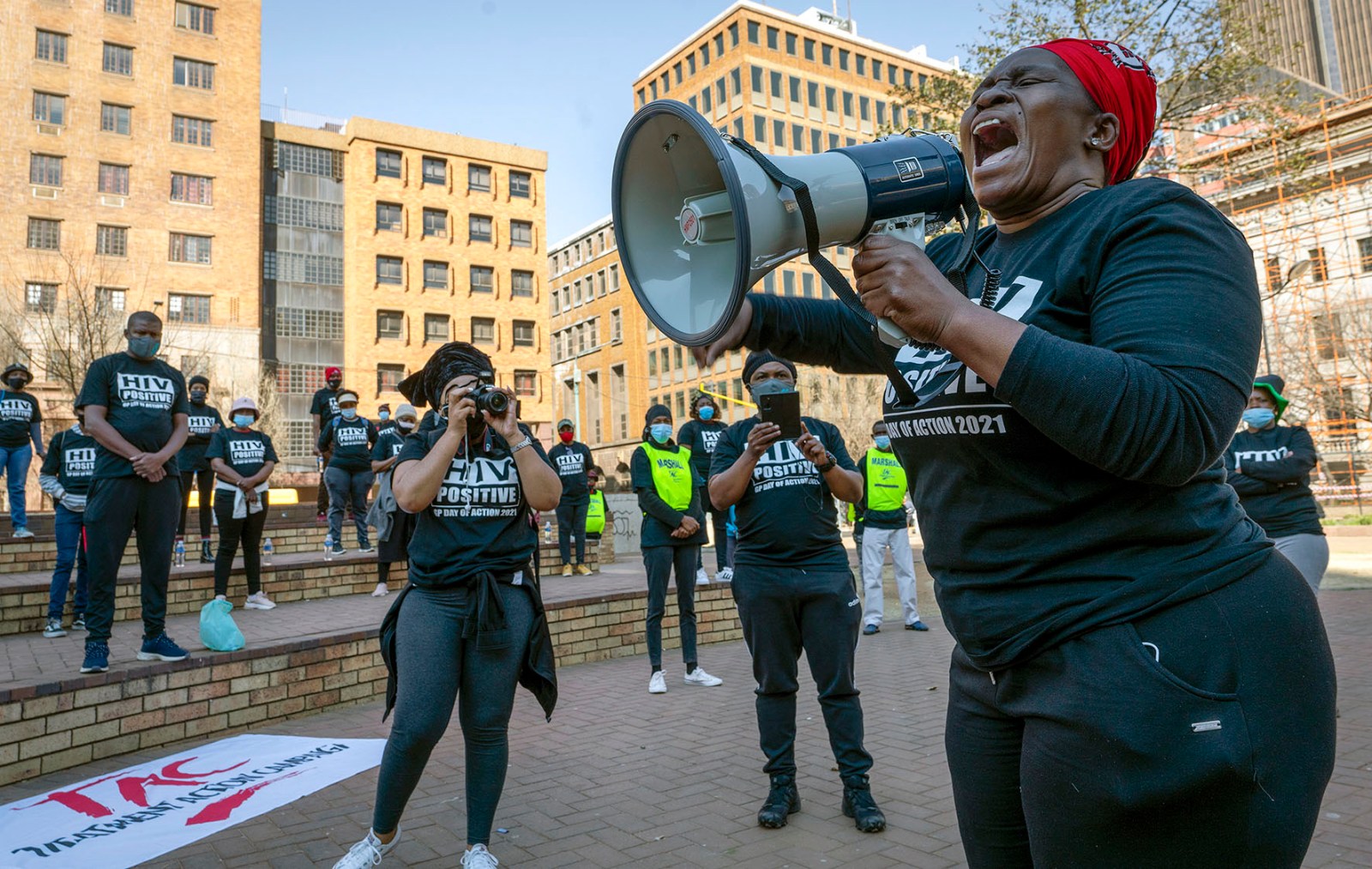 Members of the Treatment Action Campaign prepare to march to the Gauteng office of the premier on 6 August 2021. (Photo: Shiraaz Mohamed)

The Treatment Action Campaign (TAC) is deeply concerned about the level of services offered at Gauteng public hospitals and clinics. However, the group has been unable to secure a meeting with premier David Makhura and the MEC for Health, Dr Nomathemba Mokgethi. The TAC marched to Makhura’s office on Friday and again on Tuesday in an attempt to discuss its concerns about the Gauteng health system. When Makhura and Mokgethi failed to pitch for a meeting, the activists set up camp for the night and slept outside the offices in the city centre.

Members of the Treatment Action Committee (TAC) have twice marched to the Gauteng premier’s office to try to speak to David Makhura and health MEC Dr Nomathemba Mogkethi about the collapsing provincial healthcare system. Even though Makhura and Mogkethi had confirmed an appointment to meet today, they failed to pitch up.

“It is sad that when we ask them to come and commit on how they are going to fix the healthcare system, they don’t come or reschedule or provide an alternative to assure us our concerns are taken seriously,” said TAC national chairperson Sibongile Tshabalala.

“What does this mean to us as public healthcare users? It shows that the Gauteng government has no plan and they don’t want to commit to the people who voted for them. But they are always ready to dig graves (in 2020 one million graves were dug to prepare for Covid-19)… that shows clearly our own government would rather we die than take care of us.”

On Friday, 6 August, the TAC marched to premier Makhura’s office in Newtown, Johannesburg, to demand that he and health MEC Mogkethi fix the province’s health system. Neither official was available to speak to the TAC members. However, an appointment was scheduled for Tuesday by Makhura’s advisor, Dumisani Dakile.

“To those who are coming, please prepare yourselves and bring warm clothes just in case we decide to sleep over on the doorstep of the premier’s office until they decide to honour our appointment,” said TAC secretary-general Anele Yawa.

In preparation for Tuesday’s meeting, the TAC held a symbolic funeral – under the slogan #FixtheGPHealthSystem – outside the library gardens in Johannesburg to mourn those who have died as a result of the collapsed Gauteng health system.

According to Tshabalala, Gauteng’s healthcare system has been in decline since 2012. “It is heartbreaking that the issues raised as urgent then, are still as critical today, almost a decade later.”

A TAC – SECTION27 publication from 10 years ago listed some of Gauteng’s health service issues that still exist today:

There have been multiple stories over the years of patients dying as a result of Gauteng’s broken healthcare system. Among those that made media headlines include: #Justice4Shoni, Gogo Tsotetsi and  Sichelesile Dube’s death.

The TAC is also calling on officials to ensure that the province’s medico-legal claims are reduced and the campaign’s demands are met.

“What alarms us more are the strings of broken promises made by duty bearers about efforts taken to improve the healthcare system, with only lip service being paid to life and death situations,” said Tshabalala.

The TAC wants the following to be addressed with a sense of urgency:

Both Cancer Alliance and SECTION 27 are supportive of the effort by the TAC. The campaign is also inviting more organisations and individuals to join in.

Salome Meyer of Cancer Alliance says: “We are together with TAC… the health system in Gauteng has to be fixed now so we can urgently start clearing our backlog and fulfilling the promises we have made, more specifically to our cancer patients… it is not fair to send them back home to die.”

“Today is the turning point of our struggle to fix the broken public healthcare system of our country, and if it means that we must suffer or lay down our lives for this noble cause, let it be,” said Yawa.

“Our march is strictly peaceful and those who want to join us must respect this principle. The TAC leadership will be in front and will take full responsibility for the consequences of our actions until the Gauteng government fixes the public healthcare system.”