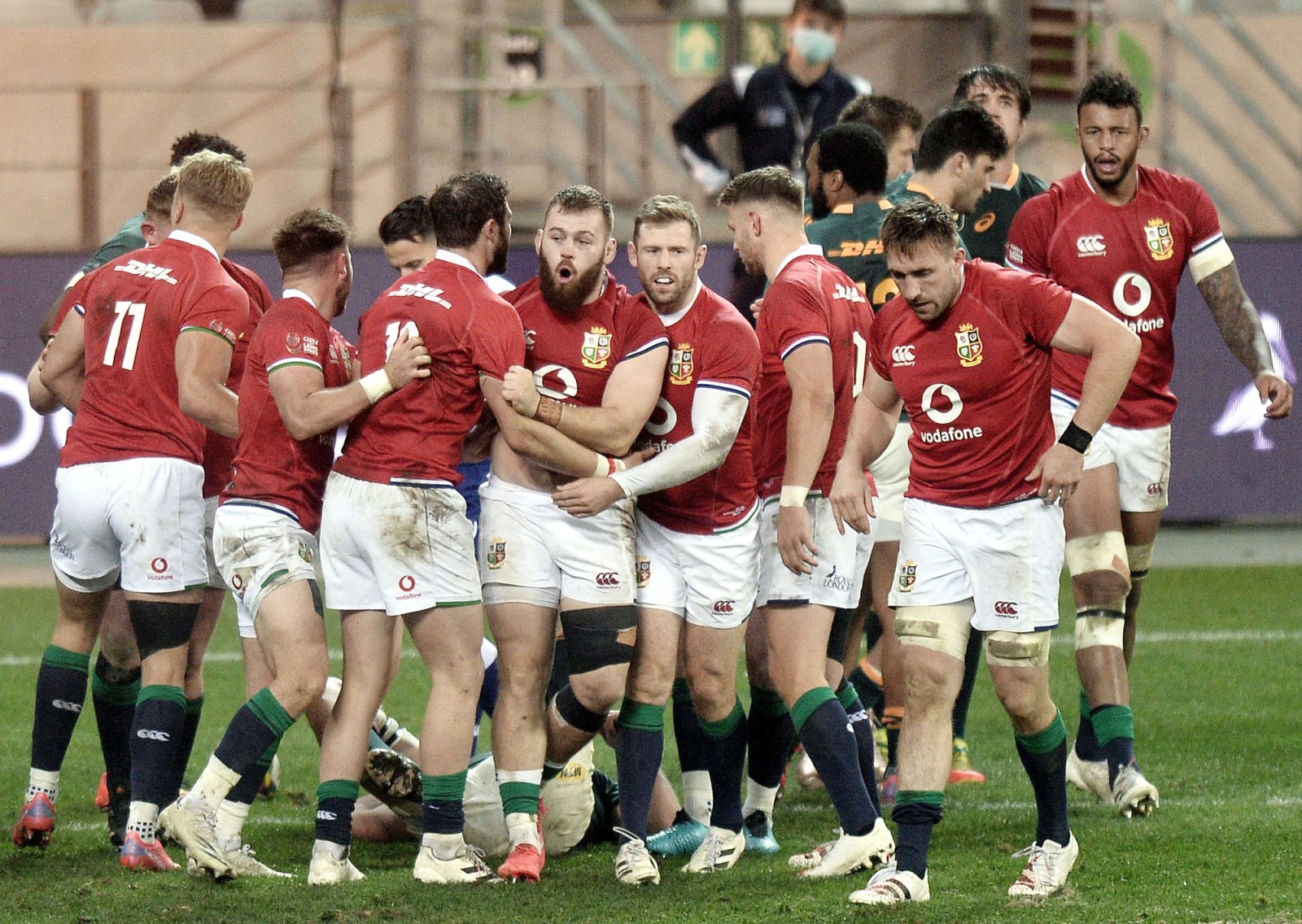 The most difficult and fractious of British & Irish Lions tours to SA ended with the deciding third Test on 7 August, but the aftershock of this tour will continue for weeks and months to come.

The winner of the series between the world champion Springboks and the British & Irish Lions should be the most important memory to take away from this once-in-a-12-year tour. But considering the environment it has been played in and the atmosphere that permeated around it, just about everyone is glad it won’t go on any longer.

The tour, from the field to the boardroom, has felt “angry”. The Test matches have been bludgeoning slugfests, with all joy seemingly sucked from the games. Which is not surprising, as they have played out against a backdrop of an angry, frayed and frankly traumatised country on the edge of an abyss.

Lions tours have been described as rugby’s last great adventure – a throwback to a more innocent time of four-month treks through great southern lands. The rugby was hard, but the revelling was harder. Lifelong friendships were made and bonds forged in a spirit of camaraderie and bonhomie after everyone had belted each other for 80 minutes.

Of course, that is a romanticised version of rugby played in a world that was different, and certainly not in South Africa’s case, better for a majority of its people.

But the birth of rugby professionalism 26 years ago and its accompanying benefits and pitfalls, in addition to several other factors, have raised questions over the Lions’ existence. And the 2021 tour has brought the Lions concept to another crossroads.

This tour was scheduled years ago, when words such as “lockdown” meant something completely different. If this was the amateur era, the Lions tour would never have gone ahead in the middle of a global pandemic.

But the needs of professionalism, the vital income that a tour of this magnitude generated through broadcast rights income, was vital to both SA Rugby and the Lions organisation to continue to function as professional entities.

While making hundreds of millions in broadcast and sponsorship revenue, what is the real cost of this tour to rugby and to the Lions specifically?

The series has provided four mismatches of staggeringly poor quality and three tight dour struggles (this was written before the third Test).

Because the Lions are a composite team drawn from the best of England, Ireland, Scotland and Wales, their tours have always been about blending the playing ingredients with the ultimate goal of finding the right recipe in time for the Test matches, which come at the end of the tour.

Even before the pandemic struck, the 2021 Lions tour was set to be the shortest in its history, with only eight games – four against South Africa’s leading franchises, one against SA “A” and three Tests against the Springboks.

The curtailed schedule, down from the 10 matches in New Zealand in 2017, Australia 2013 and South Africa 2009, was due to the demands of northern hemisphere clubs. Those clubs were unhappy about their best players being removed from the system for weeks outside of World Rugby prescribed Test windows, and so the schedule was squeezed.

The four provincial matches the Lions played featured the Sharks (twice), the Lions (Johannesburg version) and the Stormers. The Bulls could not fulfil their fixture because of several positive Covid-19 cases shortly before their scheduled meeting with the tourists, resulting in the Sharks stepping in for a second fixture three days after the first.

All those sides were shorn of their best players because the Springboks had put 47 players into camp to prepare for the Lions. But even so, the state of SA’s provincial depth was exposed, as young sides were simply no match for the Lions.

The tourists romped through those four matches, scoring a total of 240 points and only conceding 55. They provided the Lions little resistance and very little entertainment.

SA Rugby’s manifesto to its unions presented late last year emphasises to its constituents that they are all in the “entertainment” business. Watching a mixture of talented youngsters and journeymen in the provincial colours being hammered by a Lions team barely required to play anywhere near its full potential was hardly entertainment.

Selling future broadcast rights for hundreds of millions, while also convincing powerful British and European clubs to release their players for future tours that resemble this one, will be a challenge.

The Lions arrived in Johannesburg as Gauteng reached the peak of a vicious third wave of the pandemic driven by the Delta variant. They landed hours after South Africa went into an Adjusted Level 4 lockdown at midnight on 28 June.

Plans for the tour were constantly changing and, through no fault of SA Rugby or the Lions, scenario planning was a moving target. Midway through the tour, one official described it as being managed “hour by hour”.

The tour had already been scaled down to two centres in Gauteng and the Western Cape. Ultimately, all three Tests were moved to Cape Town Stadium, meaning for the first time ever since the Lions started touring South Africa in 1891 no Tests were played on the highveld.

Within days of the Lions’ arrival in 2021, Covid struck the tour. The Delta variant penetrated bio-secure bubbles hosting the Boks, Lions and Georgia (who were in South Africa to play against the Boks) in mid-July. The breach forced players and entire teams to isolate, and led to the cancellation and postponement of several fixtures.

On top of that, South Africa descended into violent civil unrest in KwaZulu-Natal and Gauteng as the Lions left Johannesburg for Cape Town. Emergency meetings were held between SA Rugby, the Lions, security consultants and even the Western Cape government. The Lions were close to calling off the tour unless they had assurances over their safety and an “exit” plan if the country completely dissolved into anarchy.

In the end, neither Covid nor civil unrest ended the tour, but it frayed nerves and tempers further, leading to a spiteful environment between the Boks and Lions on the field.

In the build-up to the first Test, the Lions management questioned the “neutrality” of emergency series television match official (TMO), South Africa’s Marius Jonker. The inference was clear that as a South African the Lions must have believed Jonker could not be neutral, or why else would they have raised it? That put undue pressure on the TMO and in the first Test several big calls went against the Boks and they lost 22-17.

The world champions were seething at the perceived injustice and felt aggrieved. They did not engage in a war of words before the first Test and ended up being on the wrong end of crucial decisions.

The Boks were further angered by the way referee Nic Berry was dismissive of Bok skipper Siya Kolisi, yet he kept up an almost constant, respectful dialogue with Lions skipper Alun Wyn Jones.

The rest is infamy. Springbok director of rugby Rassie Erasmus’s “leaked” video detailed 26 mistakes the officials made in the first Test, including Berry’s alleged bias.

It was a damning 62-minute dissection that appeared with crucial timing before the second Test. It shocked the Lions. They had started mind games with the equivalent of bringing a knife to the fight. Erasmus responded with a tank. The Boks were treated more fairly in the second Test and won 27-9.

But the rancour was palpable, and this series has been poisoned by actions on both sides.

The rugby has been a dour arm-wrestle and despite Lions coach Warren Gatland often subtly having a dig at the Boks’ style of play, the Lions offered no flair over the first two Tests.

SA Rugby has rolled out the red carpet for the tourists but they have had very little positivity emanating from the Lions camp in return. Erasmus and SA Rugby now face a World Rugby disciplinary hearing and will be brought up on misconduct charges for the leaked video.

Not since 2005, when the All Blacks thrashed a Lions team that was internally divided, has the Lions concept felt so close to collapse.

The pandemic tour has brought out the worst in everyone. It has been a joyless, bitter and, aside from the revenue, seemingly pointless rugby exercise.

One side will win the series (or maybe it will be shared), but ultimately the Lions’ future survival is the biggest loser. DM168