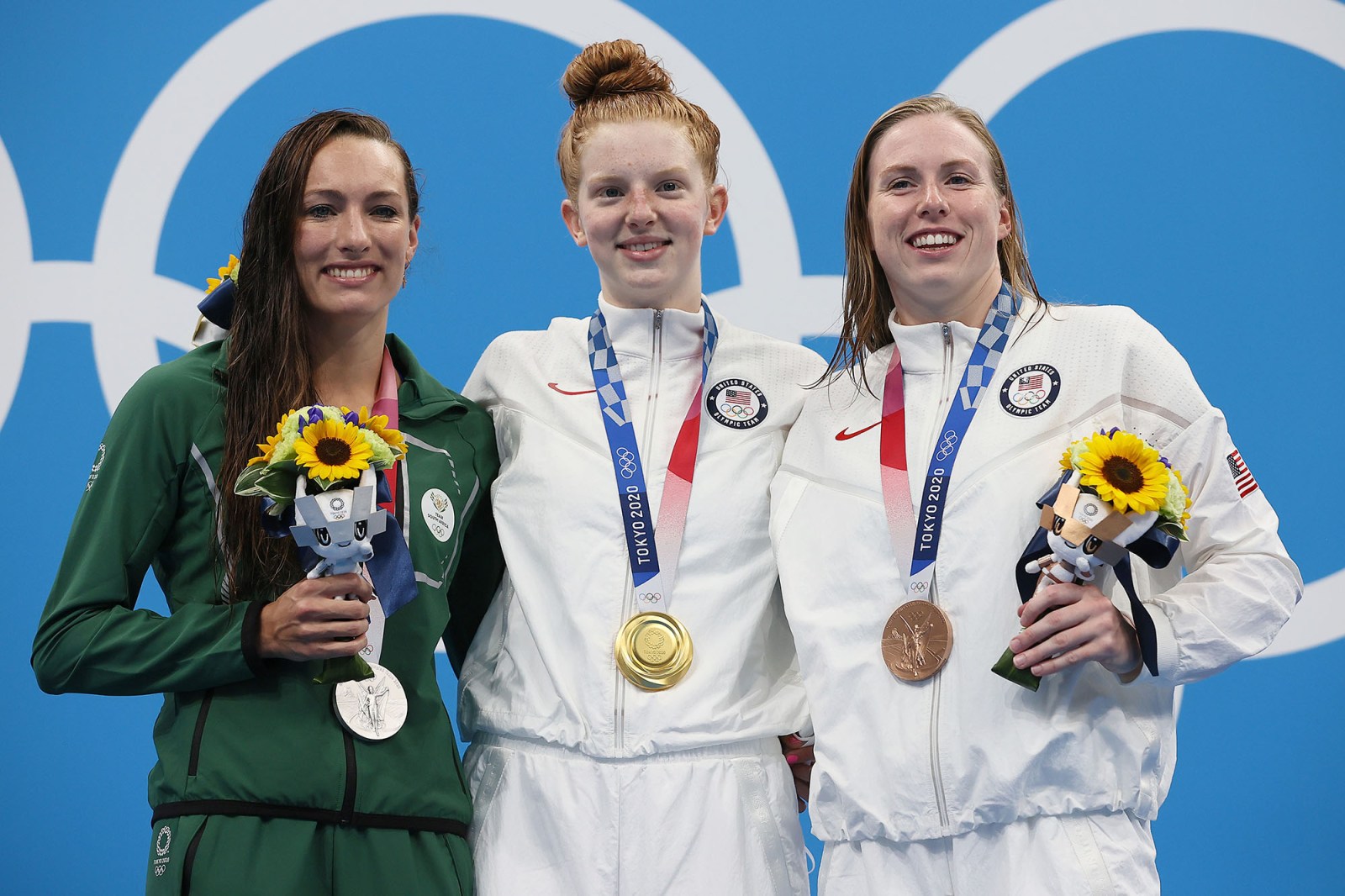 Silver medallist Tatjana Schoenmaker of Team SA with gold medallist Lydia Jacoby and her USA teammate and bronze medallist Lilly King after the women's 100m breaststroke final on day four of the Tokyo Olympics at the Tokyo Aquatics Centre on 27 July 2021. (Photo by Tom Pennington/Getty Images)

Schoenmaker made a splash when she won South Africa’s first medal of the Tokyo 2020 Games – and inspired Chad le Clos in the process.

Having qualified for the 100m breaststroke final by breaking the Olympic record for the distance and heading into the showdown as the fastest qualifier, Schoenmaker was the favourite to emerge from the water with gold in Tokyo. As it was, she only managed silver, with American teenager Lydia Jacoby edging the 24-year-old to first place.

Schoenmaker was still beaming with pride after winning her first Olympic medal, on her Games debut, as well as clinching South Africa’s first of the 2020 edition.

“It was amazing. We knew we were going to have a tough race going into the final. I cannot complain, I’ve been happy since the heats, obviously,” she said.

Schoenmaker came into the competition seeded fourth in the 100m, as opposed to being the number-one seed, as she is in the 200m. She said she was ecstatic about earning a place on the podium with all of this considered.

“My 100 wasn’t seeded as well as the 200. I’ve always wanted to do really well in the 100, but I didn’t expect to do this amazingly. Earning a first medal, I’m very happy,” added the swimmer, who was a double gold medallist at the 2018 Commonwealth Games.

Schoenmaker is only the eighth South African woman to win an Olympic medal since the country was welcomed back to the international sporting stage following the abolition of apartheid.

The 24-year-old hopes her being the first female South African swimmer to win an Olympic medal since Penny Heynes took bronze at Sydney 2000, will lift the morale of the country, which has been plunged into grimness in recent weeks.

Looting and public violence brought parts of KwaZulu-Natal and Gauteng to a standstill, and racial tension has reared its ugly head in the process.

“This medal means a lot to me. Especially if I can try to bring hope to our country. We are not going through the best of times at the moment. If this can give a slight bit of hope for anyone out there, to know that we can do it as South Africa, I’m happy,” said Schoenmaker.

The 2012 Olympic champion had suffered a scare in the heats on Monday, taking the last qualifying spot for the semifinals. He competed in the first of the two semis and made sure he reached the final with a start-to-finish win in 1:55.06.

It was a dominant performance from the South African who admitted to not getting it right in the heats. He qualified for the semifinals as the 16th-fastest out of 16, but was much sharper in the semis.

“Tatjana gave me some motivation. It’s the Olympic Games, guys. I maybe took it for granted yesterday. I came in a little bit sloppy and nearly paid for it. I was lucky. Today I made sure I was in the final and now we’ll see tomorrow what happens,” said Le Clos after sealing his qualification.

The 200m butterfly final will take place at 3.49am South African time. DM