MURDER AT A MALL

Killed by his community: The former MK soldier and metro police officer gunned down during Katlehong looting 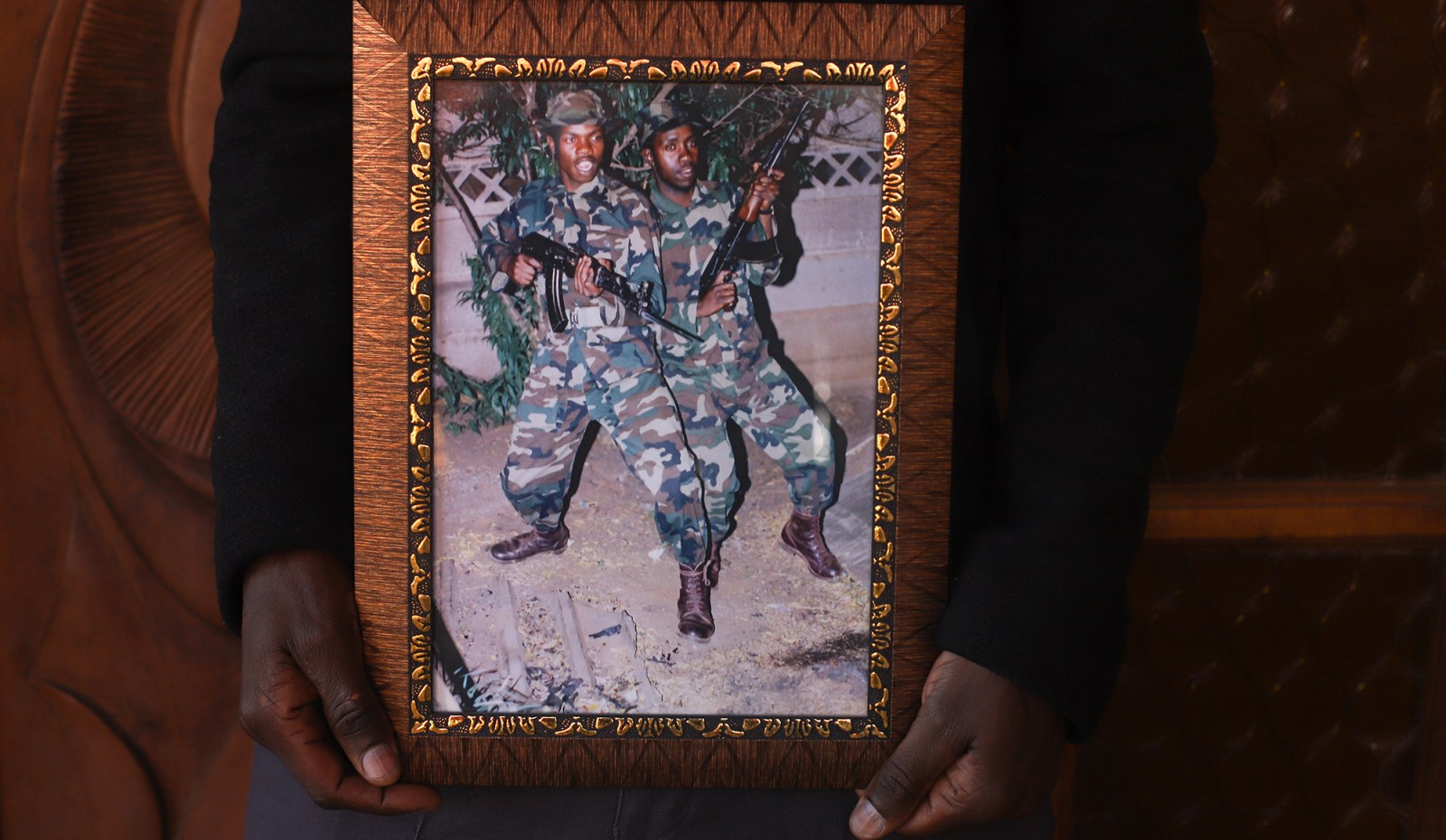 Meshack Mahlangu, left, and his brother Sindeni in their MK uniforms. Meshack Mahlangu, an EMPD officer, was killed while responding to looting at Sam Ntuli Mall on 11 July 2021. (Greg Nicolson)

Meshack Mahlangu was passionate about his country and fought for his people’s freedom, but those same people killed the metro police officer last week during looting in Katlehong.

Sindeni was three years older than “Mesh”, who died at the age of 49, but he always looked up to his younger brother, whom he described as his twin. Mesh was serious even during his childhood in Katlehong. The brothers enjoyed playing soccer, like most boys, but Mesh had principles from a young age.

Sindeni, speaking outside the family’s Katlehong home while a relative erected ANC and SACP flags on the fence, described his brother as someone who was passionate about the plight of his people, a calm listener who was astute on issues of history and politics.

In the mid 1980s, Mesh was determined to join the ANC’s armed wing, Umkhonto weSizwe (MK). As a student activist in Katlehong, he had been hounded by the police and military and Sindeni was targeted by association as the brothers looked alike.

Their parents warned Mesh, who was only 15 while he was being harassed by the security forces during the 1986 State of Emergency, about the dangers of his activism, but twice he tried and failed to join MK in exile. He’d been picked up and abused multiple times by the authorities and was resolute about fighting for his people.

“People think that they know him, but they don’t know him,” said Sindeni.

After his two trips to go into exile failed, Mesh disappeared for months. Through comrades, he ended up in what was then South West Africa, fighting with the People’s Liberation Army of Namibia, the armed wing of the South West Africa People’s Organisation (Swapo), which was fighting the apartheid forces for independence.

When he returned, his activism and run-ins with law enforcement continued, said Sindeni. The brothers eventually joined MK in the run-up to democracy, first Mesh and then Sindeni.

Sindeni claimed the brothers were the first to raise the SACP flag in Katlehong at a time when the apartheid government still feared the influence of communism.

“He loved his people so very, very hard,” said Sindeni.

As MK members, Sindeni and Mesh were integrated into the SANDF after 1994. They shared a tent during their training, sleeping alongside each other just like they did as kids. But Mesh didn’t believe the integrated forces were headed in the right direction and didn’t like how his fellow combatants were being treated. He left the army but Sindeni remains a soldier to this day.

After leaving the armed forces, Mesh worked different jobs to make a living, but was always passionate about the plight of freedom fighters, particularly the repatriation of the bodies of those who died in unmarked graves abroad.

He joined the EMPD in 2009 when ex-MK members were incorporated into the municipal force. He stayed an officer until the day he died. Sindeni said that a week before Mesh died, he told him he had tried to leave the armed forces in the 1990s but somehow he was still serving.

“I tried to leave the military but I’m still in the armed group. I’m here and that means God has chosen me to serve my people and I’ll serve them until the last day in this world,” Sindeni said Mesh told him.

“And it did happen,” said Sindeni.

The police and military don’t use the same language or drills for operations so Sindeni, a soldier, is not fully clear on how his brother died. He was told EMPD officers were facing gunfire, pinned from the left at a small gate to the Sam Ntuli Mall. Mesh was shot below his left knee and was losing blood while his colleagues struggled to get him evacuated.

After they finally got him out and started driving towards a hospital, they pulled over at a park to check on Mesh and saw he had died. The freedom fighter, passionate about his own people’s liberation, died from a leg wound sustained while defending a mall from looting.

There are two hostels on either side of Sam Ntuli Mall and Sindeni believed the residents were involved in the looting and heavily armed.

“In situations like this [the police] don’t know what to do. When they don’t respond, people say they are useless. When they respond, then also they’re wrong,” said Sindeni.

“You cannot send a policeman to the street and say they must do their job and after that their hands are tied.

“Unfortunately, I lost my twin in this situation.”

Sindeni said Mesh loved and took care of his siblings and their kids and cared deeply about his community.

“He loved his people but they turned against him. They shot him. And he was doing the right thing,” said Sindeni, outside the same home to where Mesh had returned bruised and bloodied by the security forces in the 1980s.

“How can people shoot the person that defended them during apartheid? Do these people understand what they are doing?” DM