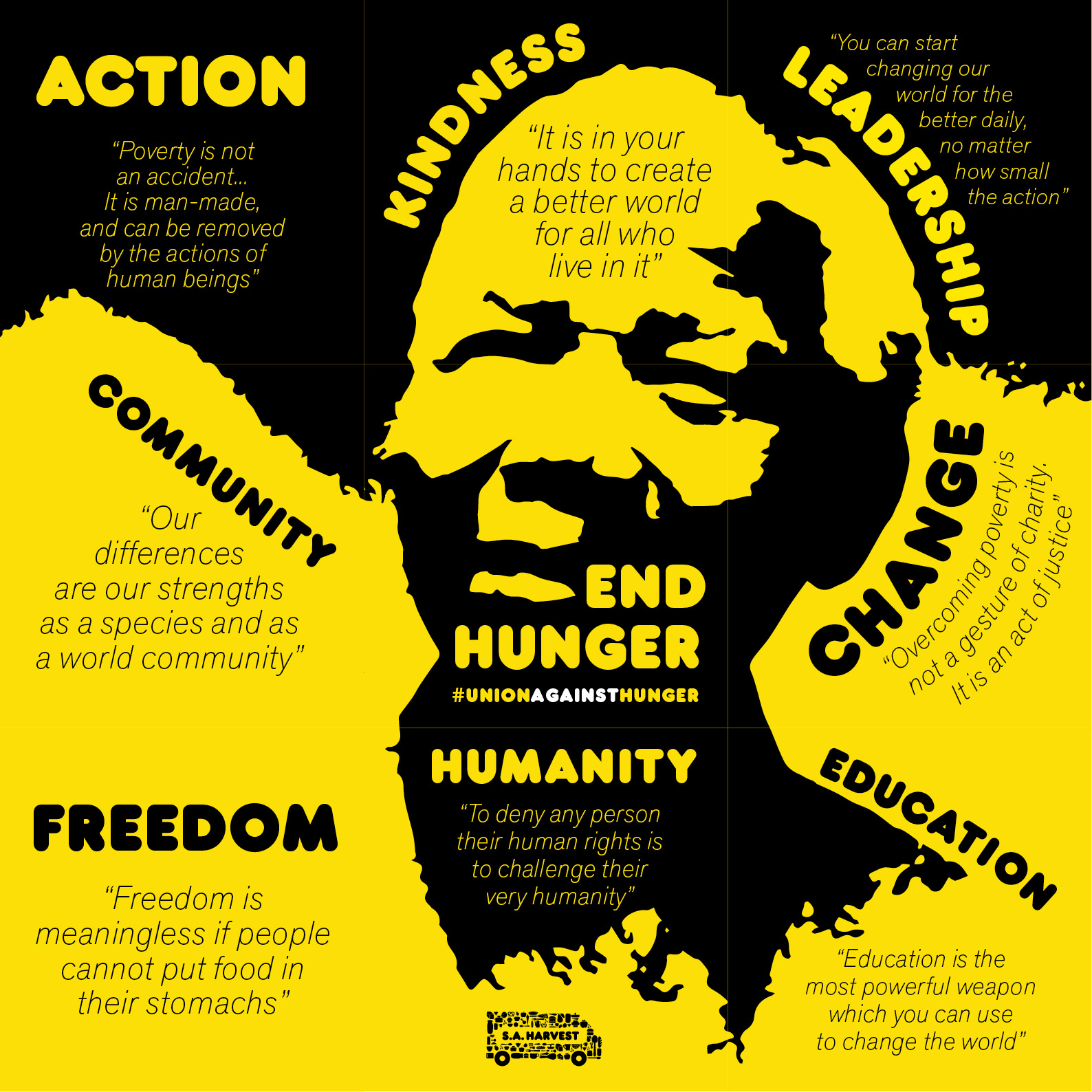 In addition to feeding as many people and rescuing as much food as they can, SA Harvest is launching a new initiative, called #UnionAgainstHunger. Their campaign calls for the fulfilment of Section 27(1)(b) of the Constitution which states that everyone has the right to have access to sufficient food and water.

Alan Browde, CEO and founder of SA Harvest, says far greater awareness of the extent of hunger in South Africa must be achieved for meaningful change to take place. “For us at SA Harvest, the spirit of Mandela Day is about leadership in making the systemic changes required to end the injustice of hunger. To achieve this we need awareness, advocacy and, most importantly, action.”

Section 27(1)(b) of the South African Constitution gives everyone the right to access sufficient food and water. Yet more than 11 million people are hungry with at least 2.5 million South Africans experiencing hunger every day. In addition record-level water shortages prevail in the Eastern Cape and other less well reported communities all over South Africa, resulting in millions of people being unable to access clean water.

Today is Mandela Day 2021. In line with the spirit of this year’s theme: one hand can feed another, SA Harvest is inviting all residents of South Africa to join them in a virtual protest against the injustice of hunger.

“The catastrophe of hunger in our country is, above all, an injustice that the government should attend to and be reminded of until they act. We want this campaign to be an ongoing promotion of the spirit of Madiba even past Mandela Day,” said Browde.

The #UnionAgainstHunger campaign is a first of its kind visual petition to the government to do specific things to begin the process of ending hunger. SA Harvest believes that collecting as many unique images as possible of people each month will establish a collective voice to protest against this grotesque miscarriage of justice. It hopes that the image of a unified nation will swell into an ocean of faces of everyday South Africans and eventually, the government will be forced to take concrete and ongoing action to pay attention to the demands of the people for access to food.

“The situation needs to be humanised and this is why we are launching a petition which is signed using visual, personal pictures. We believe that relating to human beings, rather than numbers, will help people better relate to the problem and then, by providing a platform that enables them to advocate for change, will encourage a national and growing participation.

“We are a nation that has become acclimated to the brutality of hunger. The enormity of the problem renders us incapable of imagining that there could ever be a solution. If we are to solve a problem this massive, it will take every South African, working collectively to change minds and hearts, and to create a union – a union against hunger”.

To be part of #UnionAgainstHunger all people need to do is:

By using the hashtag frame in your profile you are sending the message that you are an advocate against hunger and putting your name down for a visual petition that will be sent to the South African government every month.

Founder and CEO of The Justice Desk, an NGO that supports and encourages activism, Jessica Dewhurst said, “Food insecurity is one of the leading consequences of injustice. We at The Justice Desk are so excited to partner with SA Harvest for their Mandela Day initiative. Together, we envision a future without widespread hunger, where all people have access to their fundamental human rights.”

SA Harvest is appealing for partnerships and collaborations with other NGOs who share the vision to end the injustice of hunger. DM/MC

Maverick Citizen has a focus on investigating #FoodJustice. We write to investigate and expose the immediate agony and long-term implications of food injustice and inequality. We fully endorse the SA Harvest campaign and all other meaningful and sustained efforts at realising the right to food and an end to the violence of hunger. For more information and to join the #UnionAgainstHunger, visit