How Maponya Mall, the ‘heartbeat’ of Soweto’s economy, was rescued by the community 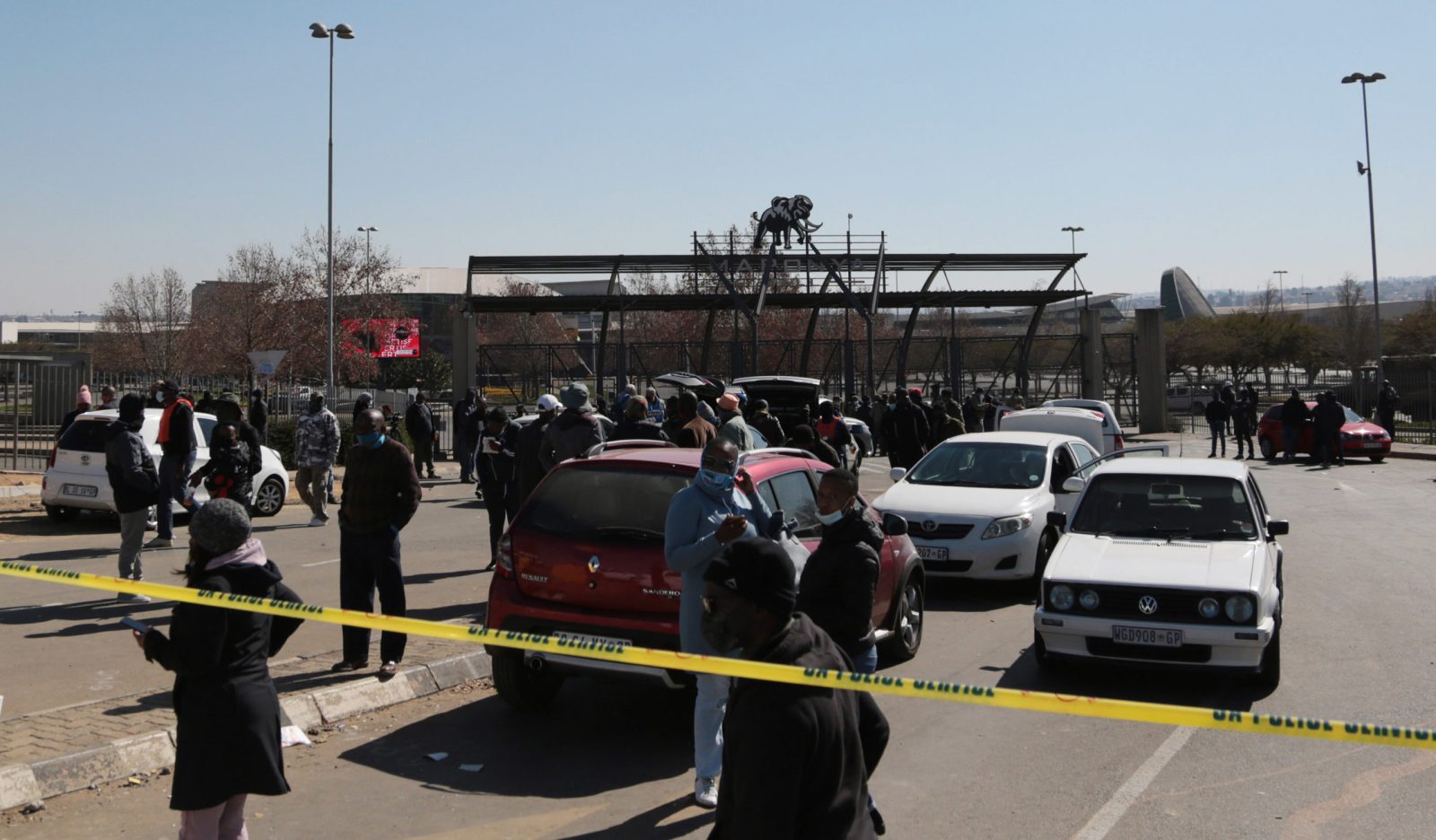 Residents around Maponya Mall have created barricades around the shopping centre to protect it from looters. (Photo: Felix Dlangamandla)

Pimville residents, undeterred by the cold, rallied to the defence of the shopping mall, a legacy of entrepreneur Richard Maponya, forming a human chain around its closed gates to block any looters.

The residents of Pimville have taken a stand against the mass lootings and have vowed to protect Maponya Mall. It is an around-the-clock mission and community members are undeterred by the cold front that has swept across Gauteng.

“The shopping mall is our last gift from the late Mr Richard Maponya. We need to protect it — even with our lives.”

These are the words of Michael*, who is one of the residents in Soweto’s township of Pimville who have defended the mall from the looting that has gripped Gauteng and KwaZulu-Natal in recent days.

At 65,000m², Maponya Mall is the biggest shopping mall in Soweto and a key cog in the township’s economy, which has been brought to its knees. Richard Maponya, a business pioneer who died in January 2020, poured R650-million into building the centre, which opened its doors in 2007.

The shopping mall is one of the many investments that brought formal retail closer to Soweto. It has also helped reverse Soweto’s inefficient spatial planning — a legacy of apartheid — that previously forced its residents to spend an inordinate amount of money and travel time to go shopping in suburban areas.

Since 13 July, Pimville residents have been forced to travel as much as 8km to Southgate Mall for household staples, including bread and milk, because about a dozen shopping malls and shops in Soweto have been destroyed. These include Jabulani Mall, Dobsonville Mall and Protea Glen Mall. Local spaza shops are not coping with the sheer demand for household items.

Maponya Mall is the only large shopping mall in Soweto that has survived, but its doors remain closed because the risk of looting remains high. “We can’t sit back and watch another mall being destroyed,” Michael told DM168 on the condition of anonymity because he is not authorised to speak on behalf of the Pimville community.

“The mall has been good to the community as it employs hundreds of people and feeds many communities — not just Pimville. If we destroy it, we will be destroying our inheritance from Mr Maponya.”

Pimville residents have taken a stand against the lootings and have vowed to protect the centre. As scenes of shopping malls in Soweto being pillaged were aired on television on 12 July, the Pimville community organised themselves through WhatsApp messages and word of mouth.

By Tuesday, more than 20 volunteers had rushed to Maponya Mall to form a human chain around its closed gates to block potential looters. It’s an around-the-clock mission and people are undeterred by the cold front. To keep warm, they burnt tyres in the evening. A food stall, which relies on the public’s goodwill for donations of items such as bread, milk, tea, coffee, water and soft drinks, has been erected at the entrance at the mall to feed the volunteers.

“The community rallied around Maponya Mall to protect it because the mall is the heart of Soweto. If the mall stops beating then the township economy dies,” said Nhlanhla Lux, who has become a media sensation for leading the community’s efforts to defend it.

The 33-year-old has cut a figure of authority; he wears camouflage gear and is armed with a pistol.

“These looters are violent and highly coordinated. I am prepared to die to stop the criminal activity in Soweto,” said Lux.

Soweto was relatively calm on 15 July when DM168 visited.

At Maponya Mall, there was a strong security presence, with at least 22 police officers and five members of the South African National Defence Force barricading the entrance. A police helicopter routinely flew over it and other parts of Soweto.

Clean-up operations at damaged shopping centres in Soweto have started. Mall owners are still counting the cost of damages and engaging with insurance companies to claim financial losses. Laurence Rapp, the CEO of JSE-listed Vukile Property Fund, said it would cost billions of rands for the entire property industry to repair the damage. Vukile owns the 27,000m² Dobsonville Mall, which was also targeted by looters. There is a broader commitment by shopping mall owners to restart retail activity in Soweto — which could take as long as two years. DM168