Nkandla gathering amounts to a bonanza of criminality; arrests must follow 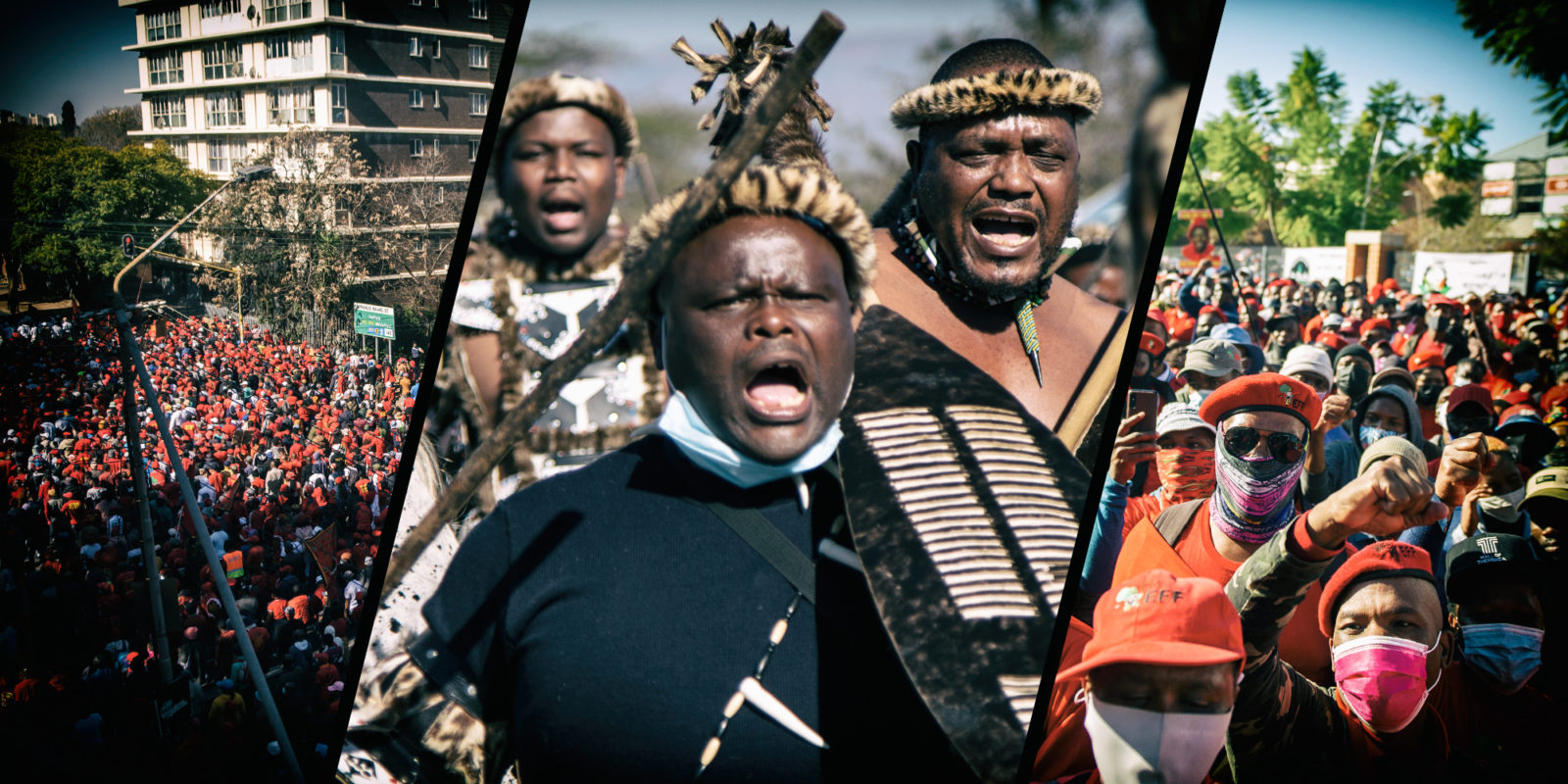 You need most of the fingers on both hands to count the laws broken as a result of former president Jacob Zuma’s grandstanding at Nkandla. But police could be wise not to act just yet — as long as when they do, they target those most responsible.

“I believe in the rule of law,” former president Jacob Zuma told his supporters outside Nkandla on Sunday.

It was a particularly odd claim to make, given that the entire gathering outside his homestead was a flagrant violation of the Disaster Management Act. Yet at no point in his address did Zuma dissuade the public from coming together in their numbers in his name.

Indeed, he tacitly encouraged it, with the line: “I call on all my supporters to use peaceful means to protest against this injustice.”

The reality is: if police are serious about bringing charges against the organisers of and participants in the weekend’s demonstrations at Nkandla, they will be busy for quite some time. By Daily Maverick’s count, at least eight criminal offences were racked up.

“All gatherings are prohibited”. It really is that simple. But for the benefit of anyone confused, clause 21 (4) goes on to stipulate that “gatherings at political events” are “prohibited until 11 July 2021, after which this provision will be reviewed”.

The convenor of a political gathering — which, depending on your interpretation, could be JZ himself in this instance, or someone like Carl Niehaus — “commits an offence and is, on conviction, liable to a fine or imprisonment for a period not exceeding six months, or to both such a fine and imprisonment”.

“Any person who attends a… political or cultural gathering and who knows or ought reasonably to have known or suspected that it is prohibited, commits an offence,” the regulations state.

The penalty is, again, a fine, six months’ imprisonment, or both.

After President Cyril Ramaphosa spelt out to the nation what Level 4 lockdown constituted, an argument could surely be made that the South African public at large “ought reasonably to have known” that such gatherings are banned.

Then again, one can’t blame anyone for a degree of uncertainty, upon seeing senior figures of the ANC participating in such an event without evident qualms.

“The wearing of a face mask is mandatory for every person when in a public place, excluding a child under the age of six years.” Ramaphosa has also repeatedly stressed that it is a criminal offence not to wear a mask in public.

Although Zuma had a mask around his neck on Sunday, he did not appear to use it — with his spokesperson, Mzwanele Manyi, hinting unconvincingly to journalists that this was due to a “medical condition”.

Once again, this is an offence punishable with a fine, a six-month jail sentence, or both. Daily Maverick journalists on the scene have also confirmed that a large number of Zuma’s supporters were, like their figurehead, mask-less.

They might seek to argue that the act of protesting constitutes “vigorous exercise in a public place”, and thereby gains mask exemption, but the regulations also prescribe that exercise must take place while maintaining a distance of at least 1.5m from “any other person”, whereas Zuma’s supporters were effectively standing shoulder to shoulder.

Section 29 regulates the prohibition of alcohol sales, and — crucially — the ban on its transportation (except where it is required for industrial manufacturing).

“Any person who publishes any statement, through any medium, including social media, with the intention to deceive any other person about (a) Covid-19… or (c) any measure taken by the government to address Covid-19,” read the regulations instituted by a government rightly concerned about the flood of misinformation that has accompanied the pandemic’s spread.

Fake news regarding Zuma and Covid-19 was flowing freely around the Nkandla event, with one particularly widely circulated WhatsApp voice note claiming that Zuma was being targeted for refusing to stand by while people were killed by the Covid-19 vaccines. If police track down the sources of these messages, they can be charged.

There were numerous reports of firearms being fired in the air as a show of support for Zuma in the area around Nkandla.

South African firearm legislation prohibits the discharge of a firearm in a public place (remember Oscar Pistorius at Tasha’s?) “without good reason to do so”.

“Recklessly discharging” a firearm is also an offence, as is discharging a firearm while under the influence.

The Riotous Assemblies Act is a controversial piece of apartheid legislation, one section of which the EFF successfully challenged at the Constitutional Court. Parliament has been tasked with redrafting portions, but for now, section III:17 still stands.

A person shall be deemed to have committed the common law offence of incitement to public violence if, in any place whatever, he has acted or conducted himself in such a manner, or has spoken or published such words, that it might reasonably be expected that the natural and probable consequences of his act, conduct, speech or publication would, under the circumstances, be the commission of public violence by members of the public generally or by persons in whose presence the act or conduct took place or to whom the speech or publication was addressed.

Zuma did pay lip service to urging “peaceful” protest in his address to supporters.

But when taking questions from journalists later on Sunday, he was asked whether he condemned the violent behaviour of some of his supporters. Zuma refused to do so, saying that their actions “tell a story”, and “they are not happy with what the court has done”.

SABC journalist Samkele Maseko has related how he was “slapped and strangled” by a Zuma supporter who accused Maseko of being a “sell-out” — an incident confirmed by South African National Editors’ Forum (Sanef) chairperson Sbu Ngalwa.

Sanef stated subsequently that “journalists have come under severe attack” while covering events at Nkandla.

No arrests were made, confirmed Police Minister Bheki Cele on Monday.

With the spectre of Marikana hanging over South Africa as an illustration of just how badly things can go wrong when heavy-handed cops meet angry protesters, Cele said he was glad that the police on the ground had acted with such restraint. It is hard to argue against this in what was clearly a potentially flammable atmosphere.

There have been strong hints that arrests will follow. Twenty SA Police Service cameras were recording the scene, according to Cele, and investigations are continuing.

But no investigations are needed to target those who are known to be responsible for organising and addressing the protest: members of the Zuma family, MKMVA figures like Niehaus, suspended ANC Secretary-General Ace Magashule.

And then there’s the EFF.

Just a week before the Nkandla demonstrations, EFF leadership led thousands of supporters on a march to the health product regulator’s offices in Pretoria, calling for the approval of Russian and Chinese Covid-19 vaccines.

Although this protest took place before the implementation of the Level 4 lockdown, it was still in violation of the Level 3 Disaster Management Act regulations, which stipulated that public gatherings be limited to 100 people outdoors. Mask-wearing was also reportedly patchy.

Acting Health Minister Mmamoloko Kubayi-Ngubane appeared to draw a direct line between the EFF action and a surge in Covid-19 infections in Gauteng, when she tweeted on 4 July: “After the Pretoria march, court protest in Joburg and marches in Soweto we saw numbers surge to above 26,000 last night”.

There has been widespread concern expressed about public failure to adhere to Covid-19 regulations in the current third wave. If authorities want to show that they are serious about outlawing gatherings, they should charge the politicians organising these recent super-spreader events — or risk accusations of rank hypocrisy when cracking down on civilians doing similarly.

At a time when the Constitutional Court’s Zuma arrest order has sent a much-needed message to the country that all are equal in terms of the law, it would be appropriate for the police to follow suit. DM