British & Irish Lions tour in balance after spate of Co... 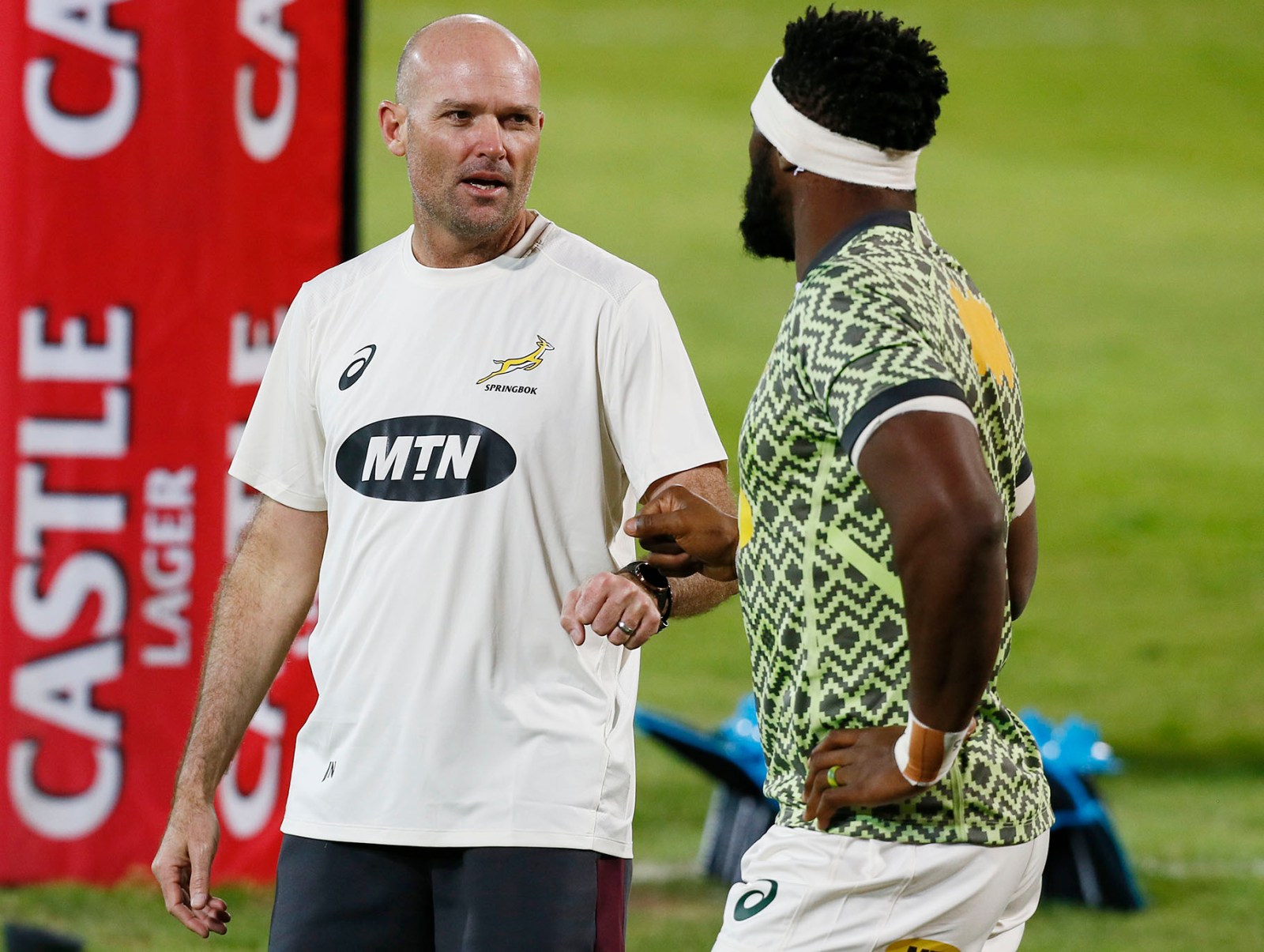 Head coach Jacques Nienaber and Springbok captain Siya Kolisi. Kolisi is one of a number of Springboks unlikely to be selected for this weekend’s Test against the British & Irish Lions due to Covid setbacks. (Photo: Felix Dlangamandla / Daily Maverick)

The British & Irish Lions 2021 tour remains precariously balanced after a spate of positive Covid-19 tests in the Springbok and Bulls camps plunged fixtures into disarray.

The British & Irish Lions have completed one game of their South African tour and play their second against the Sharks at Ellis Park on Wednesday. The increasingly pointed question is whether this tour will make it to games six, seven and eight — three Tests against the world champion Springboks.

That is after the Springbok camp returned 11 positive Covid cases in the past two days — five players and six members of management, including head coach Jacques Nienaber.

The Bulls, who were due to play the touring Lions at Loftus on Saturday, have returned four positive cases among the playing group, with one member of management also positive. That game has been postponed.

And across the Jukskei River, the Boks had to cancel all activities and retreat into isolation pods for the second time in eight days, after lock Lood de Jager returned a positive Covid-19 result after routine testing on Monday.

With four unnamed members of the Georgia team returning positive Covid tests, it’s almost certain that Friday’s second Test between the Boks and Georgia, scheduled for Ellis Park, will be cancelled.

SA Rugby and the Lions’ priority is now saving the three Tests and the unofficial fourth Test against SA “A”, which are the main drivers of broadcast revenue of this tour. Playing against Georgia again is just too risky at this stage.

The latest medical data from the Springbok and Georgia teams will be assessed on Wednesday morning by the Medical Advisory Group (MAG), which consists of members of the Boks’ and Lions’ management, and independent medical experts.

“These positive results are a setback and have underlined the danger of transmissibility of the Delta variant,” said Jurie Roux, the CEO of SA Rugby.

“The Springboks’ second Test against Georgia is now in serious doubt, but we will wait for the MAG to consider the data and we will make the final decision tomorrow.

“The priority is to maintain the integrity of the Test series [against the Lions] and we will continue to focus on that.”

It’s the kind of news that SA Rugby fears the most, especially as it raises as many questions as answers. How did players who have been in the Boks’ bio-secure environment test positive?

The positive cases do not appear to be false positives, but if some were, it would be the best outcome, because it could at least offer an explanation, even if the explanation does call into question the PCR testing process.

Overall though, it brings into question the integrity of the bio-secure environment and adds more pressure on SA Rugby to move the entire operation to the Western Cape.

A source told Daily Maverick that no Bok players breached the bio-secure protocols and that hours of security footage had been viewed to corroborate the players’ versions.

It’s unclear whether the Bok players contracted Covid from the Georgians in last week’s first Test at Loftus Versfeld. At this point, it doesn’t matter. The priority is to isolate and stop the spread.

Discussions have been ongoing about moving the entire tour to Cape Town for the remaining matches. The second and third Tests are set to be played in Gauteng at the FNB Stadium, but they are looking increasingly likely to be staged in Green Point.

The Boks were set to decamp this Sunday to Cape Town to prepare for the first Test against the British & Irish Lions at the Cape Town Stadium on 24 July.

The other aspect of these positive tests is that it keeps the Boks off the training field for another 1½ days, costing them valuable preparation time. For a side that played together for the first time in 20 months when they beat Georgia 40-9 at Loftus Versfeld last Friday, it is far from ideal.

The Lions’ match against the Bulls could be rescheduled as per the tour contract, but when and where is unclear.

On an optimistic note, all players in the South African sides have been vaccinated, so hopefully they will not have serious symptoms.

Lions versus Sharks to go ahead

In one of the absurdities of the tour, the Durban-based Sharks have flown into the epicentre of the third wave surge in Gauteng to face the British & Irish Lions at Ellis Park.

That is a result of the decision months ago to create two bio-secure environments, in Gauteng and the Western Cape. Right now, KwaZulu-Natal is probably the least affected province in the country. But the show must go on.

Lions coach Warren Gatland has chopped and changed his team again as he searches for the best Test combinations. The fact that the Bulls game might not happen at all is further cutting into his time to sort out his combinations.

Gatland has kept his promise to give every member of the squad a run-out in the first three games and made sweeping changes once again for the clash with the Sharks.

The back row will see Tom Curry make his bow for the tourists alongside fellow debutant Josh Navidi and Sam Simmonds, who had a cameo off the bench against the Sigma Lions.

Iain Henderson captains the Lions for the first time and is joined in the second row by another debutant, Adam Beard, while Gareth Davies also makes his first Lions start.

“I’m pleased we managed to come through the weekend’s game unscathed, and the boys have rested and recovered well,” Gatland said.

“We feel like we’re slowly building, but, as ever, there’s still room for improvement in all facets of our game. Wednesday night is another chance for us to have a look at a few more combinations.

“I’m looking forward to seeing how the back row goes; it’s an exciting mixture and one that we hope will offer something a bit different. We expect another physical test against a side who are known for their power play and ambition.”

Sharks head coach Sean Everitt said: “We have only played two games in the Currie Cup, but our group has been together for some time and they’re looking forward to the challenge.

“The chief goal is that we go into this game well-prepared and for the players to understand what’s coming their way. Not many of our players in the squad have international experience.

“And that includes Super Rugby, so yes, this is a big challenge. We have to get the fundamentals right, otherwise we will be punished on the day.” DM