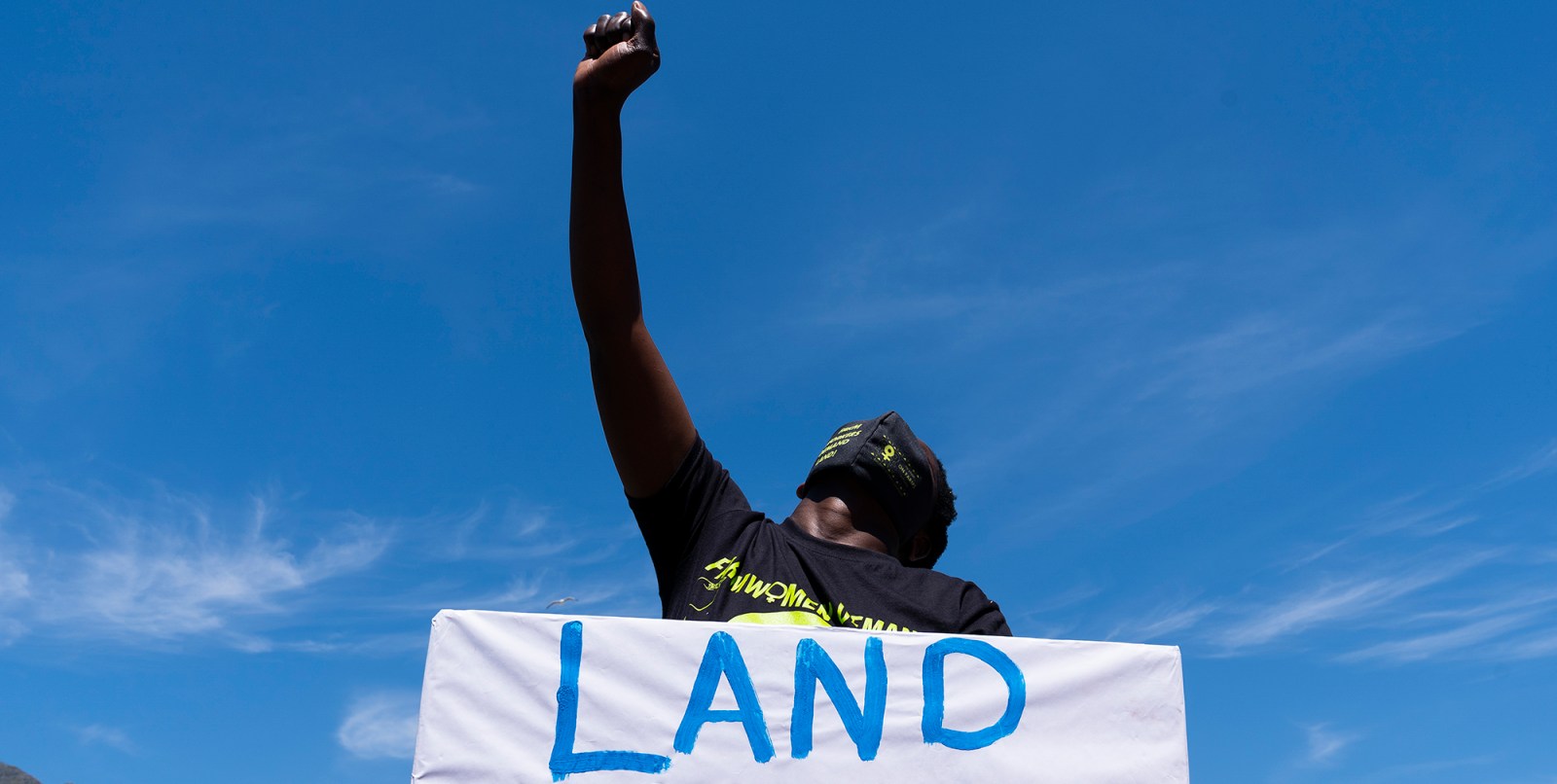 On Friday, 2 July, Parliament’s Ad Hoc Committee to Initiate and Introduce Legislation to Amend Section 25 of the Constitution — yes, that’s the proper name — will, again, meet to try to iron out what has to date been fundamental disagreement on expropriation without compensation.

While the ANC and EFF have found themselves somewhat closer, even agreeing on state custodianship of land in name, if not content, by the end of May 2021, the past weeks have failed to finalise deliberations.

It may yet get to the point where agreement remains evasive, leaving the Constitution 18th Amendment Bill dangling.

The ANC could blame the EFF for scuppering the process, along with the DA’s opposition to any constitutional amendment, and then shift gear to focus on passing the Expropriation Bill, which sets out the possibility of, for example, compensationless expropriation of state land, abandoned land or that held for speculative purposes.

That democratic Expropriation Bill, to finally replace the apartheid-era act, is well advanced in the legislative pipeline at Parliament — and it doesn’t need a special majority in the House, as does a constitutional amendment, particularly one that amends the Bill of Rights.

Because beneath the stalling on the constitutional amendment of Section 25 lie the numbers — the ANC needs the EFF’s 44 seats in addition to its own 230 in the House to make the minimum two-thirds support threshold. If this rises to the 75% many constitutional observers argue is needed because the Bill of Rights is to be amended, more votes are needed.

That’s how the numbers have always stacked up in South Africa’s supercharged politicking. And those numbers have been used by the EFF as a springboard to push state custodianship of land, or effective nationalisation in line with its policy of state land ownership.

At the 18 June ad hoc committee meeting, EFF Chief Whip Floyd Shivambu criticised the ANC for being wishy-washy and said the EFF disagreed fundamentally with its stance.

“Our categorical demand is we must establish (state) custodianship in the Constitution, and then we must have a redistribution law.”

He then announced the EFF would meet the ANC on Wednesday at Luthuli House to resolve the matter.

It’s an extra complication for the ANC in Parliament, alongside ex-president Thabo Mbeki’s missive last week on the Section 25 amendment process so far, and ex-finance minister Trevor Manuel pointing out on 23 June how the land reform target of the National Development Plan was two-thirds achieved.

On Friday, 25 June the ANC’s acting national spokesperson Dakota Legoete did not respond to requests for comment on this EFF-ANC meeting, made telephonically and by text message.

It may not happen, if weekend tweets by the EFF’s Godrich Gardee, its ex-secretary-general, now heading international relations, are anything to go by.

At Parliament, it was a “no comment” on the EFF meeting the ANC at Luthuli House from ANC MP Cyril Xaba, the defence committee chairperson who is walking point in the Section 25 constitutional amendment.

Ad hoc committee chairperson Mathole Motshekga was more specific. “Our position is, the political parties represented in Parliament must discuss this themselves… The ANC has leadership in Parliament. We don’t see any reason why the EFF should meet the ANC (outside).”

But all this indicates the political landmines in a process that began more than three years ago. The deadline to resolve this and report back to the House is now 30 August.

Despite weeks of ANC-EFF bilaterals, Xaba acknowledged they had not yet found each other — and what the EFF proposes goes against the ANC’s 2017 Nasrec conference resolution.

“We will not support it,” said Xaba, but added that the door was not closed. “It’s not our way or no way. It should be a give and take… The ANC has shifted; we now have state custodianship. Other parties could also (shift).”

The ANC proposals to the Constitution 18th Amendment Bill state, “The land is the common heritage of all citizens that the state must safeguard for future generations,” later adding, “The state must take reasonable legislative and other measures within its available resources to foster conditions which enable state custodianship of certain land in order for citizens to gain access to land on an equitable basis.”

It’s in line with the Nasrec resolution and leaves open the door to continued control of land by traditional leaders, but remains distant from the EFF’s conceptualisation of state custodianship.

“Land is a natural resource and the common heritage, which belongs to the people as a whole, under the custodianship of the democratic state,” proposes the EFF, also adding, “The state must take reasonable legislative and other measures, which enable state custodianship and for citizens to gain access to land on an equitable basis.’’

Throughout, the DA has opposed amending the Constitution. If instances of expropriation without compensation were left to national law, as proposed, future legislative amendments could broaden this, explained DA MP Annelie Lotriet.

On Sunday, 27 June Lotriet issued a statement saying the DA had written to the United Nations Human Rights Council asking it to adopt a resolution for South Africa’s government to refrain from any processes infringing on property rights.

The Freedom Front Plus is also opposed to a constitutional amendment, but has taken a different route with party Chief Whip Corné Mulder proposing this constitutional addition: “Everyone has the right to own property and no one may be deprived of property except in terms of law of general application, and no law may permit arbitrary deprivation of property.”

On Friday, 25 June the ad hoc committee meeting was postponed. Instead, the ANC met Al Jama-ah, the Pan Africanist Congress (PAC), the African Transformation Movement (ATM) and the National Freedom Party (NFP) for consultations and discussions on the Section 25 amendments.

Both Motshekga and Xaba welcomed Mbeki’s input as an important contribution to the debate.

The former president highlighted flaws in the current proceedings. He argued sharply against the EFF push to open land claims beyond the current 1913 Natives Land Act cut-off. But, crucially, Mbeki also reminded of the centrality to the ANC of Freedom Charter principles — “South Africa belongs to all who live in it, black and white…” (this is also enshrined in the Constitution) — and “The land shall be shared among those who work it. Restrictions of land ownership on a racial basis shall be ended…” with the aim of ending famine and land hunger.

“The land question must be read with the Freedom Charter”, wrote Mbeki. “Whereas the (Nasrec conference) resolution correctly referred to ‘sound legal and economic principles’, it was notable that it did not refer to ‘ideological/political principles’.”

But, expropriation without compensation is about politics. In noisy domestic politicking, politics is replacing evidence-based policy and law-making.

“Why are we putting so much energy in something that looks well taken care of? Why do we pretend nothing has happened in this debate?” Manuel said at Wednesday’s Centre for Development and Enterprise webinar. He referred to Stellenbosch University’s Bureau for Economic Research (BER) 2020 study showing that of the 23.3-million hectares committed to land reform in the National Development Plan, 67% had been redistributed.

“This is quite remarkable. If you look at the Section 25 debates you would not for a moment believe we have advanced two thirds of the way to where we want to be.”

But it’s not an unmitigated success. Land reform is sharply criticised, not only by the opposition, for pandering to rural political elites, corruption and administrative inefficiencies.

It is against this backdrop that expropriation against compensation arose when, fresh from a last-minute Nasrec win by the radical economic transformation (RET) grouping, the ANC supported a watered-down EFF motion on compensationless expropriation.

That in turn triggered a parliamentary process to determine whether a constitutional amendment was necessary — yes it was, the National Assembly decided in early December 2018 — followed by the ad hoc Section 25 amendment committee.

Since, several deadlines have come and gone in that process to make explicit what’s implicit, expropriation without compensation.

It’s unlikely this Friday will be the ad hoc committee’s last meeting. But the end-August deadline looms — as do some hard political reality checks. DM