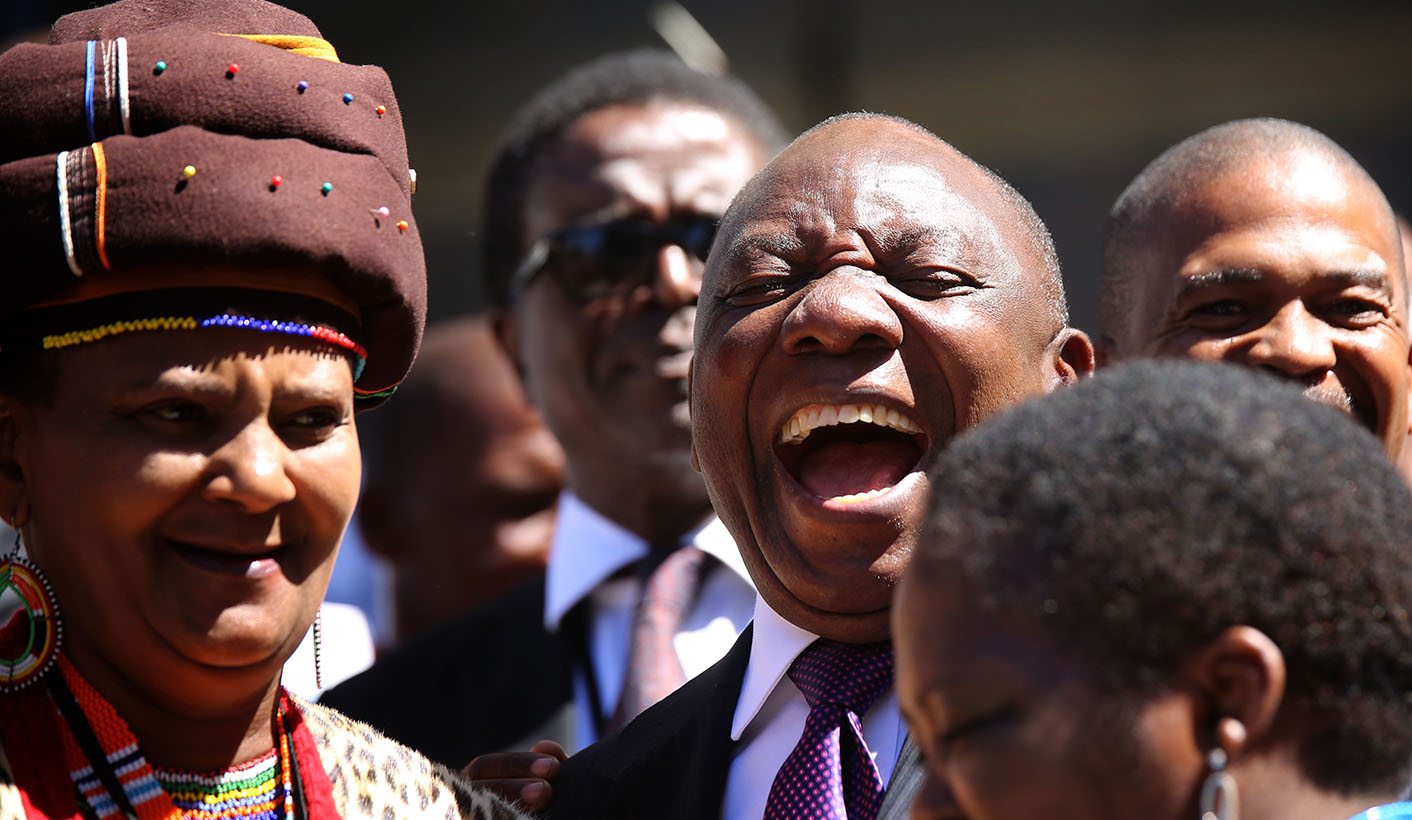 The EFF on Tuesday scored a backhanded political victory when the ANC supported its call for a constitutional amendment for land expropriation without compensation, even as the governing party’s amendments effectively watered down the original opposition motion. The historic moment happened on the 40th anniversary of the death of Robert Sobukwe, the founding president of the Pan Africanist Congress, whose motto remains “Izwe lethu (the land is ours)”. The PAC was absent from the House. By MARIANNE MERTEN.

If a week in politics is a long time, then a year is an eternity. And the changing political weather wane was clearly visible with regards to land expropriation without compensation.

On Tuesday the EFF-sponsored motion for a constitutional amendment to make possible land expropriation without compensation, as amended by the ANC, was carried with 241 votes in favour and 83 against. A year ago almost to the day, a similar motion was rejected 261 against, and just 33 in favour.

Then in 2017 the ANC maintained it could not support changes to Section 25 of the Constitution, dubbed the property clause, because of respect for the Constitution, and the long-standing ANC practice of not having anyone else tell it what to do and how to do it.

“We are not going to be told what to do. We are not in alliance with anyone else. We are a ruling government… Expropriation of land should be done for public purpose and public interests, not for the EFF purpose and EFF interests. Secondly, expropriation without compensation is unconstitutional. We need to respect and uphold the Constitution as citizens of this country and, moreover, as members of this House”.

Then President Jacob Zuma criticised his own ANC parliamentary caucus for not supporting a “black party” on this land issue in his address to the National House of Traditional Leaders.

On Tuesday the changed political optics and tone again came to the fore when President Cyril Ramaphosa told the National House of Traditional Leaders that land expropriation without compensation should be regarded “as an opportunity rather than something that is just negative… We should take it on our shoulders to resolve this original sin”, calling on traditional leaders to represent their communities’ interests. This echoes back to his State of the Nation Address (SONA) earlier this month, when land redistribution was situated at the heart of social justice and equity.

But as always there’s a spin to it, hinting at as yet unresolved differences within the governing ANC over land expropriation without compensation that had also bedevilled its December national conference.

And so Ramaphosa told traditional leaders that land reform also presented opportunities “where we can bring in a number of other partners, financial partners some of whom are willing to invest alongside ourselves as we move to reform land utilisation”, before seguing into how the participation of youth in agriculture would boost production.

Hours later on Tuesday, newly appointed Water and Sanitation Minister Gugile Nkwinti, previously in charge of the rural development and land reform portfolio, acknowledged that the ANC had been “reluctant to do this” and that it had taken 23 years for the “very patient” governing party to come to this point. But the time was now:

“South Africa belongs to all who live in it and therefore all South Africans must share equitably….”

“Let us reiterate the principle is something we 100% agree and we will not turn back… We want to redress an historic injustice. We want to take everyone along in achieving an equitable society.”

A couple of things happened in the intervening year.

One, the ANC December national conference resolved on land expropriation without compensation, albeit with the caveats that it must not undermine agricultural production or food security. With a binding conference resolution, the ANC would have had to jump through embarrassing political hoops to try to justify not supporting this EFF motion supporting the same principle.

Two, in the tumultuous political drama over President Jacob Zuma’s exit from the Union Buildings earlier this month, ANC parliamentary rules fundis successfully argued that the governing party could support the EFF motion of no confidence, if it made it its own by bringing amendments. If that was an option, then – even if it did not come to that with Zuma’s late-night Valentine’s Day resignation – it could again be now on land expropriation without compensation.

It reportedly took much of Tuesday for ANC Deputy Chief Whip Doris Dlakude to sort out the amendments to get EFF buy-in. She got it from the opposition party, which has always offered the governing party its 6% electoral support for a constitutional amendment in favour of expropriation without compensation.

“We are happy with the types of amendments the ANC wants to make. This is not a party-political matter, but an issue of national interest,” said EFF leader Julius Malema in closing the debate.

Photo: New Finance Minister Nhlanhla Nene has his first afternoon in the National Assembly on Tuesday 27 February, with a debate on land expropriation. Nene has returned to the Finance ministry after being fired by former president Jacob Zuma. Photo: Leila Dougan

But those ANC amendments are key: they effectively water down the original EFF motion and introduce the ANC December national conference resolution caveats around agricultural production and food security and wide-ranging consultations.

The agreed-to amended motion has removed the paragraph that without such a constitutional change it was “practically impossible for those dispossessed of their land to get justice for injustices perpetrated against them”. It also removed the EFF wording that expropriation without compensation was part of “a radical land reform programme”, and substituted it with phrasing that stipulated such compensation-less expropriation would unfold “in a manner that increases agricultural production, improves food security and ensures that the land is returned to those from whom it was taken from”, after wide-ranging consultations.

Through these amendments the ANC has saved political face, bringing an opposition party motion in line with its own policy resolutions and thus putting the governing party in charge of the process while it resolves the real, if glossed over internal differences on this issue and an at best lacklustre land reform track record over the past 23 years.

The historic parliamentary agreement has landed the EFF a political conquest – and allows it to claim, as Malema did afterwards, that the party has fulfilled one of the promises of getting its policy agenda onto the national platform.

“The EFF is proud it has fulfilled what it promised to do, the land will be returned to the people,” Malema told journalists outside the National Assembly.

“There’s nothing unconstitutional about it… We are using the instruments of democracy to achieve the founding principle of South African democracy.”

For the EFF there is further political mileage. It has put the DA, which opposes land expropriation without compensation, on terms with regards to coalitions in key metros. A motion of no confidence in Nelson Mandela Bay Metro Mayor Athol Trollip will be brought on 6 April – a pregnant symbolic anniversary date from the apartheid government’s hanged uMkonto weSizwe cadre Solomon Mahlangu in 1978, the arrival of Dutch colonialist Jan van Riebeeck’s arrival in South Africa in 1652 and the formation of the PAC in 1959.

The tensions flared up already on Tuesday when, according to DA Eastern Cape leader Nqaba Bhanga, the EFF “would rather place their politics ahead of the needs of (metro) residents” by not supporting the municipal adjustments budget.

Opposition parties are finding land expropriation without compensation a divisive issue after years of finding each other on a range of matters, and not just related to Zuma. Dealing with the Ramaphosa new dawn, optimism and public service in the interest of South Africa has both the DA and EFF back to the drawing board on how to deal with the changed dynamics.

The first indicators of ructions emerged in the parliamentary debate on Ramaphosa’s SONA.

What happened in the House on Tuesday goes beyond political or parliamentary niceties – it goes right to the heart of South Africa’s body politic. Watch this space. DM

Photo: President Cyril Ramaphosa on the parliamentary precinct shortly after addressing the House of Traditional Leaders. This follows his announcement of a new Cabinet on Monday night. Photo: Leila Dougan